This remarkable well-proportioned briolette-cut diamond is a creation of the master cutters of William Goldberg Diamond Corporation, whose wealth of experience, gained under the direction and supervision of diamantaire William Goldberg himself, the founder of the company, had resulted in the creation of some of the most exquisitely cut and polished large and famous diamonds in the world such as the 137.02-carat pear-shaped Premier Rose diamond, 89.01-carat, modified shield-shaped Guinea Star diamond, the 102-carat modern oval brilliant-cut Beluga diamond, 8.9-carat oval-shaped Pink Muse diamond, the 5.11-carat trilliant-cut Moussaieff Red diamond etc. The master cutters of William Goldberg Diamond Corporation had distinguished themselves in incorporating features of the modern brilliant-cut diamond to ancient diamond shapes, such as the modified shield-shaped cut of the Guinea Star diamond and the modern oval brilliant-cut of the Beluga diamond, and were also responsible for the creation of a new cut known as the Ashoka-cut based on an ancient cut found in an Indian diamond known as the Ashoka diamond. The creation of the 75.51-carat well-proportioned briolette-cut diamond, undoubtedly one of the best cut diamonds in the ancient Indian briolette style, was an attempt by the master cutters of the company to recreate an ancient cutting style, which they had achieved with spectacular results. The diamond hitherto has not been named and simply referred to as the "Briolette" in the company's website under the section on famous stones. Hence the need to specify the 4Cs of the diamond in the header, in order to differentiate it from other briolette cut diamonds. 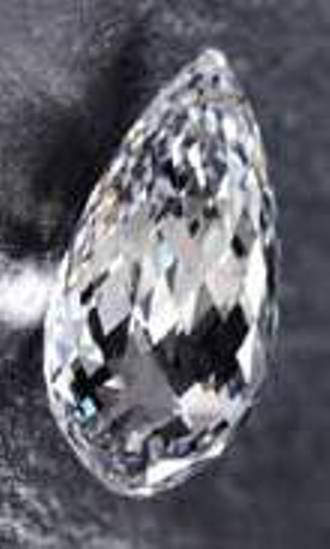 The "Briolette" is a 75.51-carat, D-color, Internally Flawless, well proportioned briolette-cut diamond. The facets on the body of the briolette appear to be rhomboidal in shape and arranged in diagonal rows. Horizontally the rhomboids are placed vertex to vertex. Triangular facets are seen on the rounded and pointed ends of the briolette.

The "Briolette" incorporated as a pendant to a diamond and sapphire pendant necklace, came up for auctions at a Christie's Magnificient Jewels auction, held on May 15, 2002 at the Hotel Richmond in Geneva, with a presale estimate of US$ 6-7 million, and was undoubtedly the highlight of an auction, in which according to the auction catalogue 442 lots were on offer. Lot 442 in the auction catalogue was described as "A SPECTACULAR D-COLOR INTERNALLY FLAWLESS DIAMOND BRIOLETTE AND SAPPHIRE PENDANT NECKLACE."

The GIA certificate accompanying the lot and bearing No. 11812033, dated January 7, 2002, stated that the diamond was a D-color, internally flawless, briolette-cut diamond weighing 75.51 carats. A note by the GIA accompanying the certificate states as follows :- "According to the records of the GIA Gem Trade Laboratory, the 75.51 carat diamond described in the GIA Diamond Grading Report no 11812033, is the largest Briolette Shaped, Flawless or Internally Flawless, D Colour, diamond that we have graded as of the date of this letter and the report issued."

Second Opinion expressed by GGL confirms the findings of GIA

The Gubelin Gemological Laboratory (GGL) that gave a second opinion on the "Briolette" diamond, issued certificate No. 0203027, dated March 8, 2002, confirming the findings of the GIA. The GGL report was accompanied by an Appendix that gives a glowing account of the characteristics of the diamond, such as its well-proportioned cut, its extrordinary polish and high degree of scintillation rarely exhibited by other briolette-cut diamonds, and the purity of color and high degree of transparency possessed by this diamond which is a rare type IIa diamond found only in a limited number of sources around the world, such as Golconda in India and South Africa. The GGL Appendix reads as follows :-

"For many centuries, diamonds have been a symbol of love, power and wealth. The combination of a diamond's unparalleled hardness and potential for crystalline purity has merited its high esteem and status. In nature, many tons of earth are necessary to be excavated in order to recover a diamond of 1 or 2 carats. Respectively, the occurrence of larger top quality diamonds, resulting in faceted gems over 76 ct, of the finest quality, is even more miraculous a phenomenon. The 75.51 ct diamond described in the above mentioned Diamond Report is one of these exceptional rarities. It possesses a purity of colour and high degree of transparency, which are particular to the world's finest natural colour type IIa diamond. Diamonds of this type and size, exhibiting a superior quality, are very rare. Such diamonds have been unearthed from only a limited number of sources around the world (e.g. South Africa and India). In addition, this remarkable diamond possesses a well-proportioned briolette form, which is complimented by the outstanding expertise conducted to finish the polish of the faceted gem. Deserving particular mention, this extraordinary diamond displays a very high degree of scintillation, which is uncommon for diamonds polished in the briolette fashion. The briolette form and cutting style is one of the earliest in which diamonds were fashioned for adornment. This form and cutting style was developed in India centuries ago and many historic diamonds were cut in this fashion as an accent to dangle from head dresses (such as sarpechs and crowns), brooches, necklaces, earrings, as well as others. This extraordinary diamond is the largest D colour, internally flawless diamond fashioned in the briolette style, which the Gubelin Gem Lab has examined to date. Such a combination of outstanding attributes in a diamond exceeding 75 ct establishes this gems position in a very elite class.".

The early history of the diamond such as the date and year of discovery, the country and mine of origin, the circumstances surrounding the discovery etc. are not known. However, according to William Goldberg's website the rough diamond weighed 160.5 carats when it arrived at their lapidaries. The diamond was most probably purchased by William Goldberg Corporation just as the other famous diamonds given on their website and passed through the hands of Diamantaire William Goldberg himself. William Goldberg died in October 2003, and the GIA certificate pertaining to the diamond was issued on January 7, 2002. Hence, the rough diamond was purchased and processed by the company during the lifetime of the founder of the company Diamantaire William Goldberg. On the assumption that the processed diamond on its twin sapphire hoop surmount was put up for sale at the Christie's Magnificent Jewels sale in May 2002, soon after the cutting and polishing of the diamond, and the further assumption that the processing of the diamond took approximately around an year, we may safely assume that the rough diamond was discovered around the turn of the new millennium in the year 2000. The mine of discovery was most probably one of the mines situated in South Africa.

The cutting of the rough diamond

While the rough diamond weighed 160.5 carats the cut and polished "Briolette" diamond weighed only 75.51 carats. Thus, there was a loss of 84.99 carats in processing the rough diamond to the finished "Briolette" diamond. Hence, there was a loss of more than half the rough weight of the diamond during the processing. Such enormous losses are generally encountered in attempting to maximize for quality in preference to quantity. The well known maxim of the William Goldberg Diamond Corporation is "never maximize the weight of a stone at the expense of beauty." In the cutting and polishing of the "Briolette" diamond, the master cutters of the company had thereby upheld their set guidelines and turned out a quality product with the highest grading of clarity. However, the greatest credit should go to the master cutters of the company, for turning out a product with an outstanding polish, and a cut that displays a very high degree of scintillation unlike other briolette-cut diamonds.

The appearance of the "Briolette" at the Christie's Magnificent Jewels Sale held in Geneva on May 15, 2002

As outlined above the 75.51-carat, D-color, internally flawless, briolette-cut diamond appeared at a Christie's Magnificent Jewels sale, held at Hotel Richmond in Geneva, on May 15, 2002. Extracts relating to this diamond taken from the auction catalogue are given in Italics above. However, the results of this auction, sale 1299, given on the Christie's website www.christies.com does not list the 75.51-carat briolette diamond. The lot that fetched the highest price in this sale was Lot No.417 - A MAGNIFICENT EMERALD DROP AND DIAMOND NECKLACE AND EAR PENDANTS, BY VAN CLEEF & ARPELS, that was once the property of Her Highness Maharani Sita Devi of Baroda, that registered a price of US$ 1, 647,976 followed by A SPECTACULAR SUITE OF DIAMOND AND COLORED DIAMOND JEWELRY, the property of a gentleman, that sold for US$ 1,013,041. Hence it appears that the 75.51-carat briolette diamond had either been withdrawn before the Christie's Magnificent Jewels sale held in Geneva, on May 15, 2002, or the "Briolette" designated Lot 442 at the sale failed to realize its reserve and was withdrawn from the sale. A pre-sale estimate of US$ 6-7 million was placed on the diamond according to the auction catalogue. Another possible scenario was that the diamond was sold to an anonymous buyer by the diamond's owners by a privately negotiated sale before the auctions, and hence the diamond was withdrawn from the sale.

What is a briolette-cut diamond ?

According to the Gubelin Gemological Laboratory (GGL), The briolette form and cutting style is one of the earliest in which diamonds were fashioned for adornment. This form and cutting style was developed in India centuries ago and many historic diamonds were cut in this fashion as an accent to dangle from head dresses (such as sarpechs and crowns), brooches, necklaces, earrings, as well as others.

The ancient Indian name used for this cut is not known, but when the cut was first adopted in the west in France it came to be known as the "briolette" derived from the French word "Brio" meaning "spirit or vivacity" a quality amply possessed by diamonds cut in this form. Briolette and Pendeloque are two different forms of "drop-cut" in which a gemstone is faceted into a "pear shape" suitable for pendants, earrings, fringes for necklaces etc. A pear-shaped modification of the round brilliant-cut is known as a Pendeloque. A briolette on the other hand is an elongated pear-shaped stone, cut with rows of triangular or rectangular facets, with one end pointed and the other end rounded and without a girdle. It is considered as a modified double-rose cut with a pointed tip and rounded bottom and several rows of facets in between.

Comparison of the Brilliant-cut and the Briolette-cut

The following table gives a comparison of the Brilliant-cut and the Briolette-cut, bringing out the advantages and disadvantages of each of these cuts.

Comparison of the Brilliant-cut and the Briolette-cut

1) The 116.60-carat Vainer Briolette Diamond - the second largest briolette-cut diamond in the world 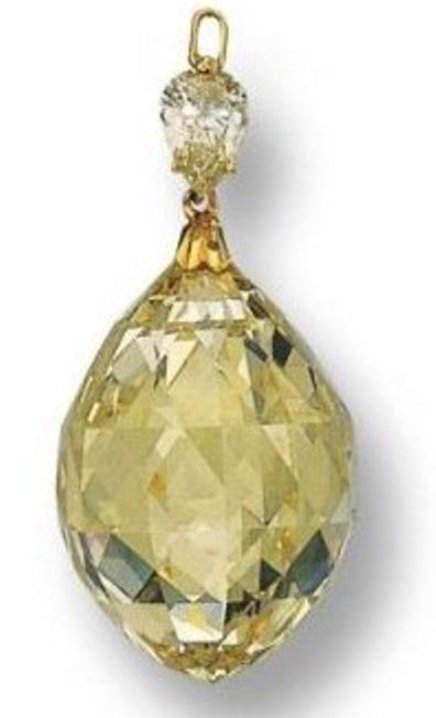 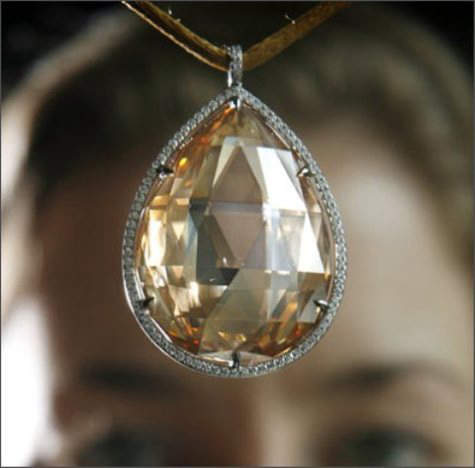 4) 95.0-carat Walska Diamond - the 7th-largest briolette-cut diamond in the world 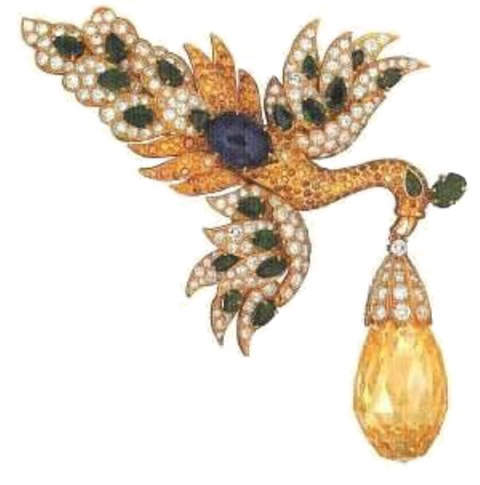 5) 90.38-carat Briolette of India/South Africa - the 8th-largest briolette-cut diamond in the world