The diamond gets it's name from the late Sir Ernest Oppenheimer, the former Chairman of the De Beers Consolidated Mines Ltd. and a pioneer in the mining industry of South Africa, in whose memory the stone was named by it's purchaser Harry Winston, in 1964, who subsequently donated the rough diamond to the Natural History Museum of the Smithsonian Institution, and is today one of the most prominent exhibits of the institution. 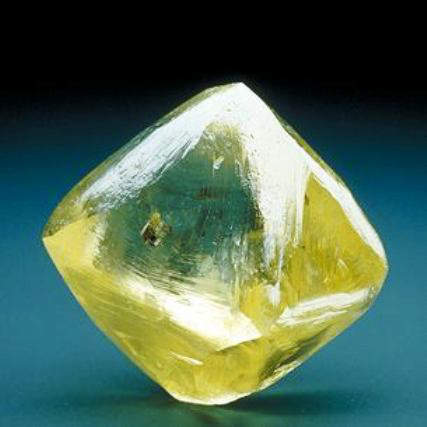 The unique feature of this rough diamond, is the almost perfectly formed Octahedral (8-sided), natural crystal form of the diamond, which represents one of the common theoretical forms in which natural diamonds crystallize. The yellow color of the diamond adds to the uniqueness of the stone, and makes it one of the rarest natural diamond crystals in the world. The weight of the diamond is 253.7 carats, and is the second largest uncut diamond in the world after "the 616"which is the larges uncut diamond crystal. When listed with other faceted yellow diamonds, the Oppenheimer is the second largest yellow diamond in the world after the Incomparable which weighs 407.48 carats.

The diamond was discovered in the Dutoitspan Mine, belonging to De Beers, at Kimberley, South Africa, in 1964. The perfectly formed, enormous, natural, octahedral, yellow diamond crystal astonished it's discoverers, that they decided to preserve it in it's natural crystalline form. The news of the discovery reached Harry Winston, who decided to purchase it immediately after seeing the unique rough crystal. After naming the diamond in memory of the late Sir Ernest Oppenheimer, Harry Winston donated the diamond to the Smithsonian Institution in order to preserve it for posterity.

It is appropriate to recall here that it was Harry Winston, who in November 1958, donated the Hope diamond to the Smithsonian Institution, with the primary aim of helping the institution, to build up a major National Gem Collection for the American people. The donation of the Oppenheimer diamond to the institution was in furtherance of his cherished dream.

Some of the important diamonds in the diamond collection at the Smithsonian's Natural History Museum are :-

1. The Hope diamond - A fancy dark grayish blue diamond weighing 45.52 carats, donated by Harry Winston in November 1958. This is the largest blue diamond in the world. The diamond originated in the Kollur mines of Golconda in Southern India.

2. The Blue Heart diamond - A heart-shaped fancy intense blue diamond weighing 30.62 carats, donated by Marjorie Merriweather Post in the 1960s. The diamond originated in the premier mines of Southern Africa and was discovered in Nov. 1908. It is the 5th largest blue diamond in the world.

3. The Portuguese diamond - An emerald-cut, colorless diamond weighing 127.01 carats, which strongly fluoresces blue under ultra-violet light. Even in ordinary daylight it fluoresces slightly, giving a bluish tinge. The diamond was acquired from Harry Winston in exchange for 2,400 carats of small diamonds. The diamond was mined in the premier diamond mines of South Africa in 1910, contrary to what one would expect from the name of the diamond.

4. Victoria-Transvaal diamond - A 67.89 carat, brownish yellow, pear-shaped diamond, donated by Leonard and Victoria Wilkinson in 1977. The diamond was discovered in Transvaal, South Africa, in 1951 and featured in a 1952 Hollywood film Tarzan's Savage Fury.

5. The Oppenheimer diamond - a 253.7 carat, naturally formed, yellow colored, enormous, octahedral crystal, which is preserved in it's natural rough state. The diamond was discovered in 1964 in the Dutoitspan mine in Kimberly, South Africa, and was purchased by Harry Winston and donated to the institution.

The collection also includes some renowned items of diamond jewelry such as :-

1. Napoleon I diamond necklace - This is a 275-carat diamond necklace given by Napoleon I to his consort Empress Marie Louis in 1811, to celebrate the birth of their son and long desired heir, Napoleon Francois Charles Joseph Bonaparte also called the King of Rome, or Napoleon II.

Chemistry of the diamond

Diamonds are crystalline forms of Carbon, in which each Carbon atom is surrounded by four other equidistant carbon atoms at the corners of a regular tetrahedron. These units are repeated over and over again in the face centered cubic pattern, crystallizing in the isometric crystal system, resulting in octahedral or cubic crystal forms commonly found in natural diamonds. Sometimes dodecahedral forms have also been found in naturally occurring diamonds. The Oppenheimer diamond has crystallized in the octahedral form.

Other shades of yellow colors are produced when nitrogen atoms are found in groups of three atoms known as N3 centers. These centers can also absorb visible light in the blue end of the spectrum imparting different shade of yellow colors depending on the concentration of N3 centers. If nitrogen atoms are scattered as groups of two atoms (A-groups), or four atoms (B-groups), they do not affect the color of diamonds as these groups do not absorb visible light. These diamonds are known as type Ia diamonds which constitute almost 98 % of natural diamonds. Type Ia diamonds are sub-divide into three types :-

Thus the Oppenheimer diamond is most probably a type IaAB diamond.