The "Palawan Princess" weighing 5 pounds (2.27 kg or 11,340 carats) is the second largest non-nacreous baroque pearl discovered from the giant clam Tridacna gigas, off the coast of the Island of Palawan, in the Philippines, a natural habitat of the giant clam.

The largest ever non-nacreous baroque pearl discovered from the giant clam, weighing 14.1 pounds (6.395 kg or 31,978 carats) was also discovered from the same habitat off the coast of Palawan, in 1934, and is popularly known as the "Pearl of Allah" based on Wilburn Cobb's legend of the "Pearl of Allah" published in the magazine "Natural History" of New York's American Museum of Natural History, in November 1939, which is now believed to be a fabrication. According to this legend the "Pearl of Allah" was discovered by a Muslim diver off the coast of Palawan, whose hands were trapped when the valves of the clam snapped shut, and thus met with his untimely death, a story that is scientifically untenable. The pearl was presented to the chief of the native Dayaks, who is said to have named it the "Pearl of Allah" because human-like features on the pearl was believed to be a miraculous representation of the Prophet Muhammad, the messenger of Allah. Doubts, have been cast by historians about the truth of this story, as most of the inhabitants of Palawan at the time the pearl was discovered, were Christians, who were evangelized by the Spanish missionaries in the 19th-century. The Dayak Chief gave the so-called "Pearl of Allah" to Wilburn Cobb, as an appreciation for saving his son's life, who had contracted Malaria, something he would not have done if the pearl had any religious significance associated with it. Thus the name "Pearl of Allah" is purely derived from the unsubstantiated story appearing in the "Natural History" magazine of November 1939.

Characteristics of the Pearl

The diameter of the pearl and the size of the shell

The "Palawan Princess" which has an uncanny resemblance to the human brain, is a non-nacreous blister pearl having an approximate diameter of 6 inches (15.2 cm). In comparison the "Pearl of Allah" has a length of 9.5 inches (24 cm). The "Palawan Princess" which has been put up for sale, by international auctioneers Bonhams & Butterfields at their Natural History Auction, on Sunday, December 6, 2009, under Lot No. :- 2377, is accompanied by the lower valve of the original giant clam shell in which the pearl was discovered, showing the point-of-attachment where this blister pearl developed. This valve measures 19 by 13 by 6.5 inches (48 cm by 33 cm by 16.5 cm). The size of the shell is small in comparison to some giant clams that measure 1.2 meters (120 cm) across, and weigh as much as 200 kg. Scientists believe that the smaller size of the clam is associated with the large blister pearl growing inside the clam, showing that the clam used most of its energy for the growth of the blister pearl, rather than the growth of its shell. 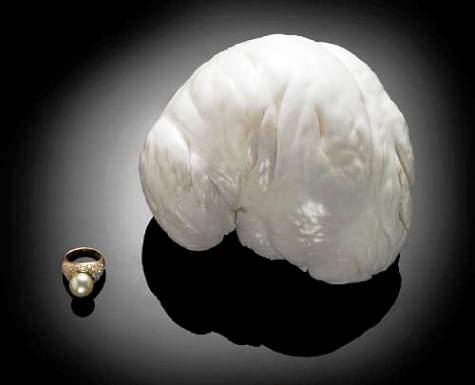 The weight, color, surface characteristics and porcellaneous appearance of the pearl

The weight of the pearl is 5 pounds which is equivalent to 2.27 kg or 11,340 carats. The color of the pearl is white, the color of the microcrystalline calcite fibers that form the nacre-like substance of the pearl. Being non-nacreous the pearl does not have the luster and brilliance of nacreous pearls, but instead the matte-like appearance of porcelain, commonly referred to as porcellaneous. The surface of the pearl has markings similar to the gyrations or fissures of the human brain. 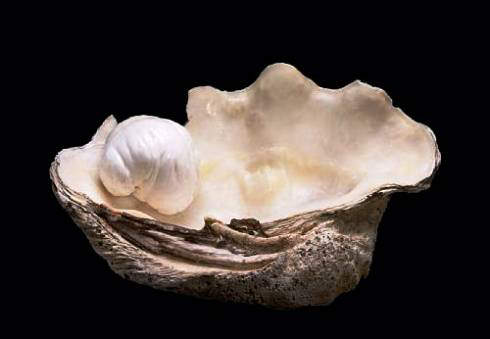 Palawan Princess With The Original Shell In Which It Was Found

Comments by gemologists and appraisers of renowned laboratories

The pearl was examined and authenticated by gemologists of the European Gem Laboratories, USA, in New York, whose director Mitch Jacubovich said, "This is an once-in-a-lifetime look at one of nature's most unique treasures. A pearl this size is not only one of the largest ones we have ever seen, it is among the largest pearl ever seen anywhere."  Another gemologist and senior appraiser of the Universal Gemological Services called the pearl, "clearly one of the most valuable pearls of its kind in the world today."

Other facts associated with non-nacreous pearls

The difference between  nacreous and non-nacreous pearls

Difference between Nacreous and Non-Nacreous Pearls

The natural habitat of the giant clam, Tridacna gigas

The natural habitat of Tridacna gigas are the shallow coral reefs of the South Pacific and the Indian Oceans. Two of the common habitats of the giant clam, are the Great Barrier Reef off the coast of Queensland in northeast Australia, the largest coral reef system in the world, and the coral reefs off the Philippine Islands. Little wonder then, that two of the largest giant clam pearls were discovered from the same habitat, off the coast of Palawan Islands.

In keeping with their large size, which can sometimes reach as much as 1.4 meters and a weight of 250 kg, giant clams can produce pearls of enormous sizes. However, the occurrence of such pearls is extremely rare. An indication of its rarity can be obtained, just by considering the year of discovery of the two largest recorded giant clam pearls, the "Pearl of Allah" and the "Palawan Princess." While the "Pearl of Allah" was discovered in 1934, the "Palawan Princess" was discovered recently (exact year not known). Assuming that the "Palawan Princess" was discovered in the year 2000,  it has taken 66 years for the second largest giant clam pearl to make its appearance, after the discovery of the largest giant clam pearl in 1934. This gives an indication as to the extent of its rarity, which greatly enhances the value of the pearl. Hence the comment by Mitch Jacubovich, that it was a once-in-a-lifetime opportunity to look at one of nature's most unique treasures.

How long would it have taken for the "Palawan Princess" to develop inside the giant clam ?

Thus assuming that the "Palawan Princess" was formed in a giant clam with an average life span, at the growth rate of 1.5-3.0 mm per year, the pearl would have taken somewhere between 50 to 100 years to develop. But, given the fact that the size of the clam shell is smaller (48 by 33 by 16 cm), believed to be associated with the growing pearl inside the shell, the energy of the living clam being expended more for the growth of the pearl than the shell, the estimation of the time taken for the development of the pearl would necessarily be more complicated, and much less than 50-100 years. The same nacre deposition rate applied to the "Pearl of Allah" gives a period of approximately 80 years as the time taken for its formation. The above calculations it must be noted however, are based on several assumptions, and may not reflect an accurate picture of pearl formation in giant clams under natural conditions.

The value of non-nacreous pearls

However, massive calcareous concretions like the "Pearl of Allah" and the "Palawan Princess" have a value of their own, not driven by any ornamental considerations, but other factors, such as :-

2) Their enormous sizes, going on record as the first and second largest natural pearls produced by a bivalve mollusk.

3) The long time taken for the pearls to develop, which may be as long as their mature life time.

5) The collectors value associated with such extremely rare creations of nature, both for private collectors and well-established museums.

When Wilburn Cobb the owner of the "Pearl of Allah" died in 1980, his estate including the giant pearl was disposed of by public auction. The "Pearl of Allah"  was purchased by Peter Hoffmann and Victor Barbish for $200,000. This was the highest price ever realized by the "Pearl of Allah" that has gone down on record, even though there had been staggering estimates of the pearl, ranging from $3.5 million to $93 million. In this context the pre-sale estimate of $300,000 to $400,000, placed on the "Palawan Princess" by the auction house Bonhams & Butterfields is a very realistic value

The "Palawan Princess" comes up for sale at a Bonhams auction on December 6, 2009 at Los Angeles

The world's second largest pearl, the "Palawan Princess" is due to come up for sale on Sunday, December 6, 2009, at the annual holiday auction of Natural History, organized by the renowned international auctioneers Bonhams & Butterfields. The pearl has been listed in the auction catalogue under Lot No. 2377 and is referred to as a - Rare and Immense Natural Non-Nacreous Pearl - "The Palawan Princess." A pre-sale estimate of $300,000 to $400,000 has been placed on the pearl, which is in keeping with previous prices obtained for such pearls. However, depending on factors laid out above, such as the extreme rarity of the pearl, its enormous size, its natural provenance, and above all the collectors value associated with the pearl, it would not be surprising if the successful bid exceeds the pre-sale estimate.

The annual holiday auction also features a variety of distinctive and high-quality mineral specimens, exceptional fossils, gold nuggets, and unusual jewelry, including a selection of high-quality gems and lapidary works of art.