The Star of South Africa was the initial name given to this diamond, when it was purchased as an 83.5-carat rough diamond, by Lilienfeld Brothers of Hopetown, from Schalk van Niekerk, in 1868, for £11,200. Subsequently after Lilienfeld forwarded the diamonds to their office in England, it was purchased by Louis Hond, a diamond cutter, who fashioned it into an oval three-sided brilliant. The diamond eventually became the property of the Earl of Dudley, who purchased it from the Queen's jewelers Messrs. Hunt &Roskell for £25,000, and presented it to his wife the Countess of Dudley. The diamond thus became known as the Dudley Diamond, after it's new owner.

The diamond is a D-color, pear shaped, three-sided stellar brilliant cut stone, weighing 47.69 carats. The diamond takes pride of place as one of the most significant and historical diamonds in the world, not so much for it's size, shape, color, or clarity, but because it has gone down in history, as the diamond that turned the tides of fortune in South Africa, setting off a diamond rush that eventually led to the discovery of the world famous Kimberley mines, and other diamond mines, that changed the course of history in South Africa forever, and created unforeseen and enormous economic prospects for the development of the country. 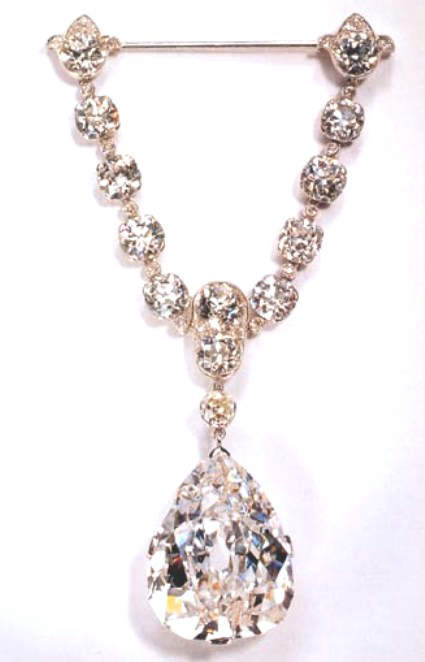 History of the diamond

The story of the Dudley diamond, is the history of the beginning of diamond mining in Southern Africa, starting from the region of the Cape of Good Hope. The discovery of the diamond was purely an accident and the main characters involved in this drama are the trader and hunter Mr. John O' Reilly, Mr. Van Niekirk a pioneering colonist of the Griqua territory, Dr. Atherstone, an authority on gems and minerals, Bishop Ricards, the Roman Catholic Bishop of Grahamstown , Griqua Witch Doctor Swartbooi (Griqua shepherd boy in another version).

It was the year 1867, when things were at the very worst for the settlers and colonists from the west, and they came to regard the whole of South Africa as God forsaken country. At this time a trader and hunter by the name of John O'Reilly was living in a place called Albania, which was part of the province of Griqualand West. The Griquas were under the Chieftainship of Nicholas Waterboer, who later ceded his territory to the British, which became a Crown Colony. It was in this territory that alluvial diamond mines were later discovered. Griqualand West was about 600 miles from each of the sea ports, and could be approached by several land routes such as the Western Table Bay route, the eastern route from Port Elizabeth, the East London route, and the Durban or Natal route.

Colonists settled in the Griqua territory of Albania, two years before the discovery of diamonds. One such pioneering colonist was Mr. Van Niekirk. One day Mr. John O'Reilly, the trader and hunter , was returning from the interior to Colesberg, and decided to call on Mr. Van Niekirk and perhaps lodge with him for the night, before proceeding with his journey. Later in the evening he casually observed one of Van Niekirk's children, a little girl , playing on the floor with some pretty pebbles, collected from the neighborhood. Among the pebbles, was one stone which attracted John O'Reilly's attention, as it was reflecting the evening rays of sunlight very strongly. Reilly picked up this stone and after a casual examination offered to buy it from Van Niekirk, who was puzzled by Reilly's extraordinary interest on a worthless pebble. The simple minded Boer that Van Niekirk was, he said that he would take no money for the stone, but if Reilly was interested he could have it for free.

Mr. John O'Reilly a man of good character and an honest and sincere trader, told Van Niekirk that he believed the pebble to be a precious stone of value, and would not take it for nothing. it was finally agreed that O'Reilly should carry the stone with him, get it identified , and it's value ascertained, and after selling it, the money should be divided equally between them. Mr. O'Reilly took the stone to Colesberg and showed it to some of his friends at the bar, confidently telling them that it was a diamond. To prove his point he wrote his initials with it, on the glass window pane,and also cut a tumbler with the stone. But, his friends would not believe him, and made him a laughing stock for his alleged foolishness. However O'Reilly was not discouraged, and sent the stone to Grahamstown to Dr. Atherstone an authority on minerals and gemstones, for testing and evaluation. Dr. Atherstone showed the stone to Bishop Ricards, the Roman Catholic Bishop of Grahamstown who was knowledgeable and a man of Science. After careful examination, both men pronounced that the stone was a diamond of 22 Â½carats. The stone was then sent to the Hon. Richard Southey, the then Colonial Secretary, who later became the Lieutenant-Governor of Griqualand West. Hon Richard Southey, sought expert opinion available on the authenticity of the stone, and every one was agreed that the stone was indeed a diamond. The Colonial Secretary then forwarded the stone to Queen's jewelers, Messrs. Hunt &Roskell, in England, and the finding of the experts in South Africa, was confirmed by them. They also valued the stone at around Â£500. The stone was then purchased for this amount by his Excellency, Sir Philip Wodehouse, who was the Governor of the colony at that time. The diamond was subsequently cut and polished to give a 10.73-carat cushion-cut brownish-yellow brilliant, known as the Eureka Diamond. This diamond is now preserved in the De Beers Archives because of it's historical significance.

Having confirmed his finding to be a diamond, Mr. O"Reilly was spurred into action, and began looking around for similar pebbles, and it was not long before he found another stone weighing 8.9 carats, and this stone too was purchased by Sir Philip Wodehouse for Â£200. The news of the two finds spread like wildfire, and there was great excitement throughout the country. The natives started looking for diamonds everywhere and they discovered several small diamonds. Then the news spread that a large diamond of over 83 carats had been discovered. Mr. Van Niekirk who discovered the 22.5-carat Eureka, in the previous year heard about the large stone being picked up by a Griqua Shepherd boy on the Zandfontein farm near the orange river. But, other authorities say that stone was actually picked up by a Griqua Witch Doctor by the name of Swartbooi, on the Zanddfontein farm. Mr Van Niekirk approached the native who was holding the stone ,and after satisfying himself that the stone may be a diamond, struck a barter deal with him, in which he acquired the stone in exchange for 500 sheep, 10 oxen, and a horse. It was practically all of Niekirk's possessions.

Mr. Van Niekirk carried the stone to Messrs. Lilienfeld Brothers of Hopetown, who also purchased his previous finding the 22.5-carat Eureka. They purchased the stone for Â£11,200, and christened it the "Star of South Africa". Later they forwarded the diamond to England, where it was cut and polished to a 47.69-carat pear-shaped three-sided stellar brilliant, that was eventually sold by the Queen's Jewelers Messrs. Hunt &Roskell to the Earl of Dudley for Â£25,000. The Earl presented the diamond to his wife Countess of Dudley. The Earl of Dudley got the diamond mounted on a head ornament with 95 other small brilliants . The present whereabouts of the diamond is not known.

If Nitrogen atoms are scattered as single atoms or groups of odd numbers such as 3-atoms, they can absorb visible light in the blue end of the spectrum causing a yellow color varying from pale to intense shades.

If Nitrogen atoms are found as aggregates of even numbers such as two or four atoms that do not absorb visible light, the color of the stone is not affected.

Therefore colorless diamonds are either absolutely pure diamonds without any Nitrogen atoms or diamonds in which the Nitrogen atoms are distributed as groups of two or four atoms.