The Taj-i-Mah diamond gets it's name from the Persian Shahs to whose ownership the diamond passes at one stage in it's history after it's origin and stay in India for a certain period. Taj-i- Mah in the Persian language means the "Crown of the Moon." 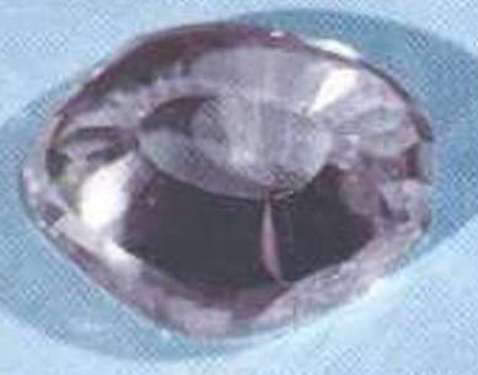 According to the ancient Indian system, diamonds were classified into 4 divisions, depending on their quality, which obviously included color and clarity. The 4 divisions in descending order of quality were (1) Brahmins (2) Kshatrias (3) Vaisyas (4) Sudras.

The highest quality diamonds were referred to as Brahmins, the lowest as Sudras, the other two being of intermediate grades. The classification could be applied either for rough stones or finished stones. In keeping with this classification the Taj-i-Mah was undoubtedly a Brahmin.

The diamond is undoubtedly of Indian origin, as evident from it's shape, skillfully cut in the form of a rose-cut diamond, the style almost universally adopted in Hindustan in ancient times. But there were two possible sources for the origin of the diamond in India.

According to one version the diamond originated in the diamond mines of Sambalpur, which extends over a fertile plane, 451 feet above sea-level, between the Mahanadi and the Brahmani rivers, in the east of the central provinces of India. Most of the diamonds known to ancient Indians, seem to have originated in these mines. The diamond river, mentioned by Ptolemy, has been identified as the Mahanadi river, in whose banks the Sambalpur diamond mines were situated. Large stones are said to have been discovered in these mines since ancient times, but according to recorded history the largest diamond weighing 210.6 carats was found in the island of Hira Khund on the Mahanadi river in 1809. The diamonds of the Mahanadi were generally of very good quality and ranked among the finest and purest of Indian stones.

Around this period another exceptional quality "Brahmin"class diamond weighing 168 carats was also discovered in these mines and entered the treasury of the Maharani of Sambalpur, Rullum Coher, Subsequently troops of the adjoining Martha Confederacy of the Holkar or Scindia dynasties attacked Sambalpur, and robbed the Maharani's gems, and drove her into exile. Later these stones were deposited in the stronghold of Asseeghur, which was captured by the British in the year 1819, at the breaking up of the Maratha Confederacy. The 168-carat rough diamond, from which the Taj-i-Mah seems to have originated, eventually found it's way to Persia, but how and when it occurred according to this version is not clear.

According to the second version, the Taj-i-Mah originated in the Kollur mines on the banks of the Kistna river, east of Golconda. The discovery of the diamantiferous deposits at Kollur was made about 100 years before Tavernier's visit to Golconda, probably around 1560 A.D. At the time of Tavernier's visit in the 17th century, more than 20 mines were being worked, employing over 60,000 people.

The year of discovery of the Taj-i-Mah is not known, but the diamond eventually found it's way to the court of the Mughal emperors, before the arrival of Nadir Shah in 1739. There is no evidence to pin-point exactly the Mughal emperor during whose rule the diamond entered the Mughal treasury. But the diamond left India, together with a vast quantity of other treasures looted by Nadir Shah's forces, during the reign of Muhammad Shah. The value of the loot was estimated to be around 30 to 60 million sterling pounds. After Nadir Shah's assassination in 1747, the diamond seemed to have been inherited by his grandson and weak successor, Shah Rukh, together with other famous stones like the Darya-i-Nur and the Nur-ul-ain. Later after the fall of the Afsharid State based in Khorasan, Shah Rukh was captured by Agha Muhammad Khan Qajar, who was not satisfied with the tally of the Afsharid's treasure declared by Shah Rukh . He subjected Shah Rukh to the most horrifying and painful torture until he surrendered all the hidden treasures, which included the Darya-i-Nur, the Nur-ul-Ain and Taj-i- Mah. Shah Rukh died of the wounds inflicted on him during the torture.

Agha Mohammed Khan Qajar, the founder and first ruler of the Qajar dynasty of Iran did not live long, after crowning himself as the Shahanshah (King of Kings) in 1796. The very next year in 1797, he was assassinated by his own servants, while on an expedition to Georgia, the second during his rule.

Agha Mohammed Khan Qajar was succeeded by his nephew, Fath Ali Shah, who also inherited all the crown jewels. In the early 19th century when Sir John Malcolm, the British administrator and diplomat visited Persia, he was granted an audience with the Shahanshah Fath Ali Shah, and was allowed to inspect the crown regalia. He thus relates the incident in his "Sketches of Asia,"published anonymously in 1827,....."The King at this visit, appeared in great good humor with the Elchi, and gratified the latter by showing him his richest jewels, amongst which was the Darya-i- Nur (Sea of Light), which is deemed one of the purest and most valuable diamonds in the world. Many of the others are surprisingly splendid. Sir John Malcolm adds, "the Darya-i Nur weighs 186 carats and is considered to be the diamond of the finest luster in the world. The "Taj-i-Mah or "Crown of the Moon"is also a splendid diamond. It weighs 146 carats. These two are the principal diamonds in a pair of bracelets, valued at nearly a million sterling. Those in the crown are also extraordinary size and value."

Doubts have been expressed as to the identity of the two diamonds in the pair of bracelets mentioned by Sir John Malcolm, the 186-carat pink diamond Darya-i-Nur , and the 146-carat white or colorless diamond "Taj-i-Mah."It has been suggested that the 186-carat diamond in one of the bracelets was not the pink diamond "Darya-i-Nur,"but actually the colorless "Koh-i-Nur,"which would form a matching pair with the colorless "Taj-i-Mah."Moreover it had been stated by some travelers that the Koh-i-Nur was worn by Fath Ali Shah in one of his arm bands.

This suggestion is purely a conjecture, and does not have any merits, as it is not supported by the chronology of events during this period. It is well Known that by the time Fath Ali Shah succeeded to his uncle, Agha Mohammed Khan Qajar's throne, in 1797, the Koh-i-Nur was already in Afghanistan with the successors of Durr-i-Durrani (Pearl of the Pearls), Shah Ahmad Khan Abdali, the king of Afghanistan, who was the former commander of Nadir Shah's 4,000-man Afghan bodyguard, who died in 1772. The Koh-i-Nur diamond fell into Khan Abdali's hands in the immediate aftermath of Nadir Shah's assassination, amidst the confusion caused by the attempts of his close associates and commanders to lay their hands at least on part of his enormous treasurers.

In the year 1965, the Iranian Crown Jewels were studied by a team of experts from the Royal Ontario Museum, who postulated that the Darya-i-Nur, and the Nur-ul- Ain, both pale pink diamonds originated from the same pink "Great Table Diamond"of more than 400 carats seen by the French traveler and jeweler Jean Baptiste Tavernier, while in Golconda in 1642. The 186-carat Darya-i- Nur, is the major portion of the Great Table Diamond, and the 60-carat Nur-ul-Ain is derived from the lesser portion. The Darya-i-Nur was mounted by Shah Nasser-ed-Din (1848-96) on an elaborate frame, surmounted by the Lion and Sun emblem of the Imperial Government of Iran, and which also included 457 other smaller diamonds and four rubies. this elaborate mount is preserved in it's original form up to this day. The Nur-ul-Ain was mounted on a special tiara, designed by Harry Winston in 1958, for empress Fara Diba on the occasion of her wedding to Shah Mohammed Riza Phalavi. The Nur-ul-Ain is still preserved in the same setting in the Iranian Crown Jewels . However the Taj-i-Mah as it is today remains unmounted. It is the largest unmounted Indian diamond in the collection.

The stone is still part of the Iranian Crown Jewels, and one of the three legendary Indian diamonds in the collection, the other two being the Darya-i Nur (Sea of Light) and the Nur- ul-Ain (Light of Eye). The previous weight of the stone was 146 carats, and the stone seems to have been recut after the early 19th century, when Sir John Malcolm inspected it at Fath Ali Shah's palace.

The Taj-i-Mah is a colorless diamond of unknown grade. Absolutely colorless (D-Grade) diamonds are extremely rare and are considered to be the purest of the pure of all diamonds, without any impurities, such as Nitrogen or Boron, and perfectly formed crystals without any plastic deformations. Such diamonds are only about 1-2% of all naturally occurring diamonds, eg. Cullinan diamond, and the Koh-i-Nur. The presence of extremely minute detectable quantities of Nitrogen can impart a yellowish tinge to the diamond, if the nitrogen atoms are scattered singly or in groups of odd numbers such as 3 atoms. This obviously reduces the color grading of the diamond and it's value. But, sometimes the yellowish tinge can be masked by a bluish tinge formed by fluorescence.