The Allnatt diamond derives its name from the onetime owner of the diamond, Major Alfred Ernest Allnatt, who was a soldier, sportsman, art connoisseur, and philanthropist. At the time Major Allnatt purchased the diamond in the early 1950s, it was a cushion-cut stone, with a weight of 102.07 carats and a color grading of fancy intense yellow. Soon after purchasing the diamond, Major Allnatt entrusted the renowned jewelry firm Cartier's to design an appropriate brooch setting for the diamond. In executing this order Cartier's  turned out a beautiful brooch setting for the diamond, consisting of a platinum flower with five petals, a stem and two leaves, all set with white diamonds, and the cushion-cut Allnatt diamond as its centerpiece. 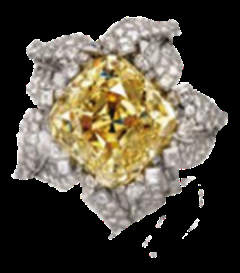 The Allnatt diamond is a 101.29-carat, cushion-cut, fancy vivid yellow diamond with a VS-2 clarity, as certified by the Gemological Institute of America. Fancy vivid is the highest color grading that can be given to colored diamonds in the GIA color grading scale.

Being a fancy vivid yellow diamond, the Allnatt is without any doubt a Type Ib diamond, in which the intense yellow color is produced by nitrogen atoms scattered as single atoms in the crystal structure. These nitrogen atoms absorb visible light in the blue region of the spectrum, causing the complementary color of blue, which is yellow, to manifest itself. However the occurrence of these diamonds are only about 0.1 % of all naturally occurring diamonds, and are therefore quite scarce. 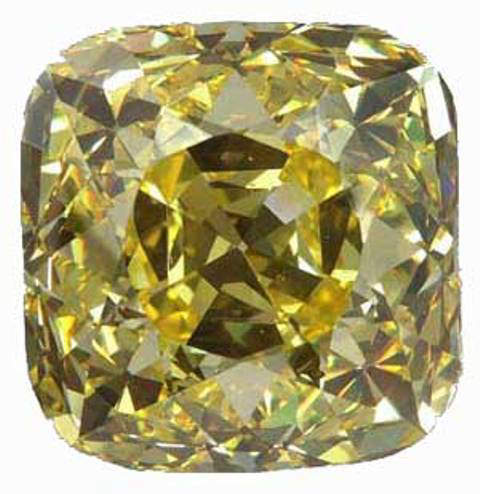 Type Ia diamonds on the other hand, have an occurrence of almost 98 % in nature, and a great majority of natural diamonds belong to this group. These diamonds vary from near colorless to pale and medium yellow colors. Nitrogen atoms in these diamonds are found as groups of 2, 3 or 4 atoms. If found as groups of 2 or 4 atoms they do not affect the color of diamonds. However if nitrogen occurs as groups of 3 atoms, known as N3 centers, it can impart a pale to medium yellow color to the diamonds, depending on the concentration of the N3 centers. Usually groups of 2, 3, and 4 atoms occur together in the same crystal, and such diamonds are known as Type IaAB diamonds. 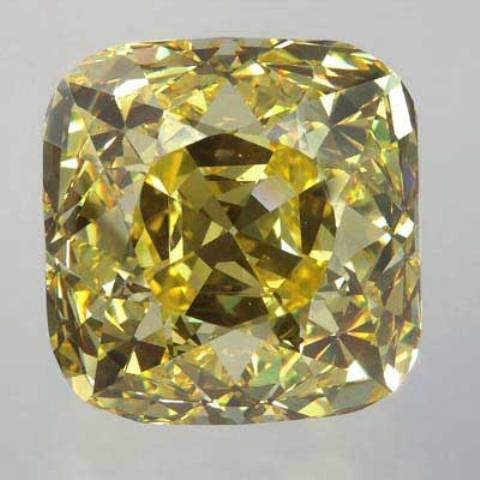 Another view of the Allnatt diamond 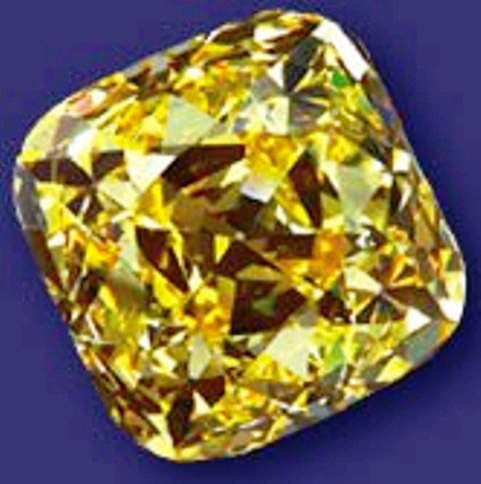 Early history of the diamond

Nasser al-Din Shah, Shah of Iran from 1848 to 1896 was the first reigning monarch to appreciate the beauty of yellow diamonds, and boosted their prices by purchasing 48 pieces of big yellow diamonds from Europe during his three visits in 1873, 1878 and 1889 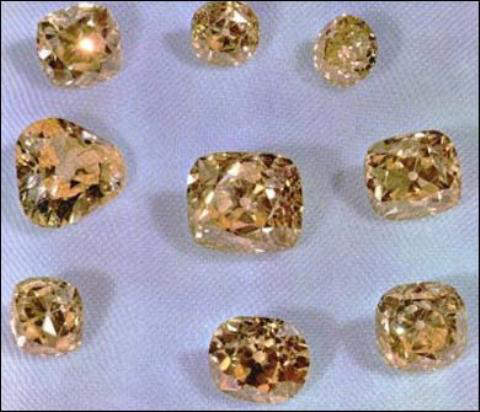 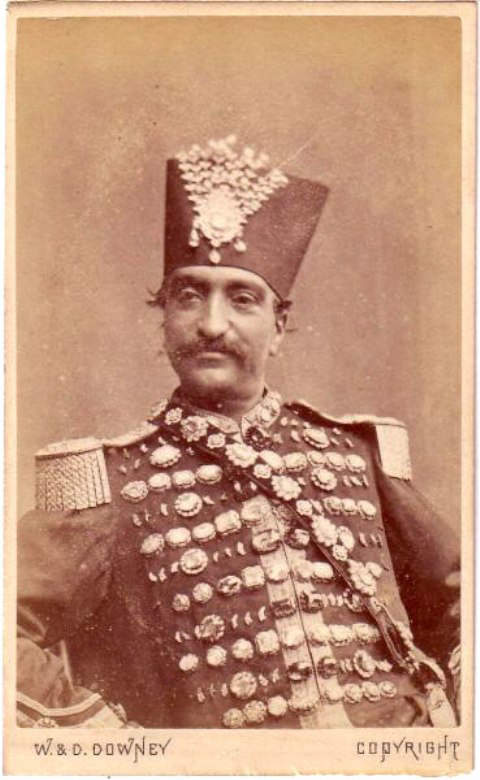 Nasser al-Din Shah - Shah of Iran from 1848-1896, wearing a uniform studded with diamonds from the Iranian treasury 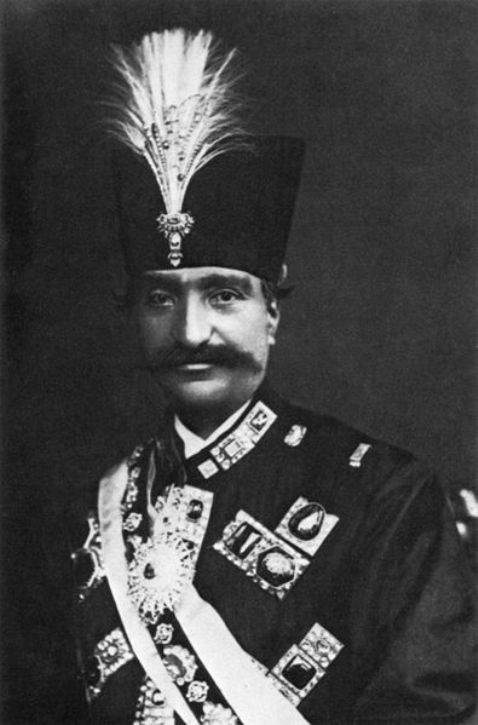 Nasser al-Din Shah - wearing some of the famous diamonds in the Iranian treasury as brooches, one of which is the rectangular table-cut Darya-i-Nur

The opening of the Jagersfontein mine in 1888 and the Premier diamond mine in 1902, in which several large high quality white diamonds were discovered, help consolidate the view that South Africa was indeed a producer of high quality diamonds

Subsequently, the opening of the Jagersfontein mine in 1888, in which were discovered two of the largest colorless diamonds the 995-carat Excelsior diamond in 1893 and the 650-carat Reitz diamond in 1895, changed the whole perception of the quality of the diamonds produced in South Africa. Besides the opening of the Premier diamond mines in 1902, in which was discovered  in 1905, the largest ever, gem-quality, rough, colorless diamond in the world, the 3,106-carats Cullinan diamond, helped to consolidate the view that South Africa was also a producer of high quality colorless or white diamonds. Later the discovery of rare fancy colored diamonds such as blue and pink, in the Premier diamond mines, helped to consolidate this view further.

The largest of these mines is the Kimberley, where digging started in 1871 after the first diamonds were discovered on the slopes of Colesberg inselberg (kopje), by a group of prospectors known as the "Red Cap Party," on the farm "Vooruitzigt" belonging to Nicolas de Beer and Diederick de Beer. The news of the discovery sparked a diamond rush, that came to be known as the "New Rush" and the brothers Nicolas and Diederick de Beer unable to protect their farm from the thousands of prospectors, sold it for £6,300. The name "Vooruitzigt" was transformed into "New Rush" and later by proclamation of the Colonial Secretary in July 1873 to "Kimberley," the name derived from the name of the Secretary of State for the Colonies, at that time, Lord Kimberley. Within a short period of about one month more than 800 claims were cut into the hillock, by 2,000 to 3,000 men and the height of the hillock gradually decreased. As thousands more joined, in the biggest diamond rush of the century, the hill disappeared, and gradually turned into a hole, which increased in depth day by day, and was finally transformed into what came to be known as the "Big Hole" an alternative name for the Kimberley mine. 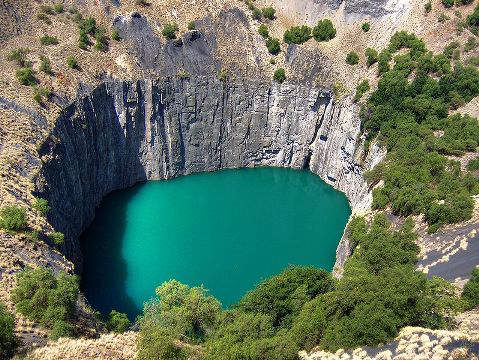 During the period of operation of the Kimberley mine, from 1871 to 1914, worked both as an open pit mine and later as an underground mine, to a depth of 1,097 meters, 50,000 miners were engaged, digging with picks and shovels, and producing 2,722 kg of diamonds. The "Big Hole" that was created had a surface area of 17 hectares (42 acres), depth of 240 meters and an average width of 463 meters, making it one of the largest manually dug holes in the world. Subsequently, as underground mining started, the hole was partially infilled with debris, reducing the depth to about 214 meters. Presently around 40 meters of water has accumulated in the hole, and only 175 meters of the hole is visible.

After purchasing the diamond, Major Allnatt assigns the jewelry firm Cartier to design a brooch setting for it

After purchasing the diamond in the early 1950s, Major Alfred Ernest Allnatt, entrusted the jewelry firm Cartier's to manufacture an appropriate setting for the diamond. In executing this order Cartier's  turned out a beautiful setting for the diamond, consisting of a platinum flower with five petals, a stem and two leaves, all set with diamonds. At the time the Allnatt was purchased by the Major, it weighed 102.07 carats, and had a cushion-cut, whose color rating was subsequently found to be fancy intense yellow.

Later History of the diamond

In May 1996, the Allnatt was put up for sale at an auction conducted by Christie's of Geneva. The successful bidder at this auction was the SIBA Corporation of Hong Kong, who purchased the Allnatt for a sum of around $ 3.05 million. SIBA had already in its collection another famous diamond the Agra, which it purchased on June 20, 1990, for £ 4.07 million, also at a Christie's auction.

The Allnatt diamond is slightly recut by the SIBA Corporation with a loss of only 0.78 carats, but elevating the color intensity of the diamond to fancy vivid yellow, the highest color grading for colored diamonds

After purchasing the Allnatt, the SIBA Corporation had the stone slightly re-cut, still maintaining the cushion-cut of the diamond, but the weight of the stone decreased to 101.29 carats, with the loss of only 0.78 carats. However, there was a tremendous improvement in the color intensity of the diamond, which was elevated to fancy vivid yellow by the GIA, the highest color grading for colored diamonds.

Allnatt exhibited at the Smithsonian Institution

The Allnatt diamond was exhibited on two occasions at the Natural History Museum of the Smithsonian Insitution, in Washington DC, one in 2003 and the other in 2005.  In 2003, it was part of the "Splendor of Diamonds" exhibition, held between June 27 and September 30, that also featured other famous diamonds such as the Millennium Star, the Steinmetz Pink, the Pumpkin, the Heart of Eternity, the Ocean Dream, and the Moussaieff Red. In 2005, the Allnatt was part of the "Diamonds" exhibition held between July 8, 2005, and February 26, 2006, that featured a star line-up of eight of the world's most incredible diamonds, displayed together for the first time. This included the De beers Millennium Star, the Steinmetz Pink, the Incomparable, the Ocean Dream, the Allnatt, the Moussaieff Red, the Heart of Eternity, the 616 diamond, the Eureka, the Shah Jahan, and the famous Aurora collection consisting of 296 natural fancy colored diamonds. 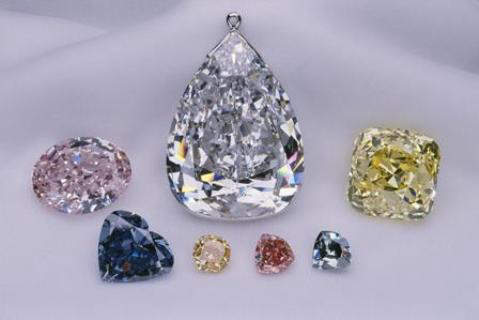 Major Alfred Ernest Allnatt was an English businessman, who was also a soldier, sportsman, art patron and philanthropist. He inherited his father's supply business, and developed it into Allnatt London Properties, and other well known businesses in England.

Being a patron of the arts and a connoisseur and collector of paintings, Alfred Alnatt purchased Peter Paul Ruben's 1634 painting "The Adoration of the Magi" in 1959, from the estate of the Duke of Westminister, for a record price of US$ 660,000 (£275,000). In 1961, he offered to give this painting as a gift to King's College, Cambridge, which was accepted, and the ownership of the painting was transferred to the college, by a deed of gift in November, 1961. 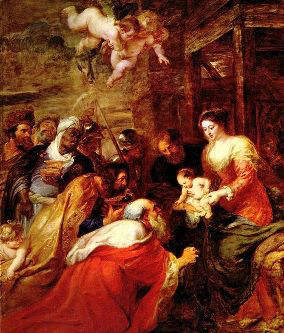 Peter Paul Ruben's 1634 painting "The Adoration of the Magi"

In 1968, the renowned painting, with a height of 4.2 meters and width of 3.2 meters, was placed on permanent display, in the east end of the King's College Chapel, an appropriate site that would also take care of the security of the painting. However, unfortunately in 1974, the painting was vandalized by IRA sympathizers, who scratched IRA in large 2-foot high letters across its front. Around this time the painting was estimated to be worth US$ 2.4 million. In 1970, the National Gallery in London, purchased a painting by Caravaggio called "Salome with the Head of St. John the Baptist" from the collection of paintings of Major Alfred Ernest Alnatt.

Alfred Alnatt was also a sports enthusiast who enjoyed horse racing. He was an owner of horses and purchased several yearlings owned by another horse racing enthusiast Sir Sultan Muhammad Agha Khan. One of his horses named Ujiji finished third in the English Derby in 1942, and came first in the Gold Cup in 1942, at the Newmarket races in England.

Alfred Alnatt died at his residence Doughty House, the former residence of the Cook Baronets, in Richmond Hill, Surrey. His ashes were buried in the churchyard, at Turville, Buckinghamshire.