The name refers to an antique, late 19th-century, natural pearl and diamond, five-row necklace that appeared at the Christie's Geneva Jewels Sale, held on May 12, 2010, and made a significant impact by registering a price of 147,000 CHF (US$ 132,682) much above the pre-sale estimate of 80,000-100,000 CHF (US$72,195-90,244). The enhanced sale price registered by the lot, a trend followed by most of the pieces incorporating natural pearls, also indicated the recovery of the strong auction market for natural antique pearls, following the recent global economic recession.

Characteristics of the Natural Pearl and Diamond Five-Row Necklace 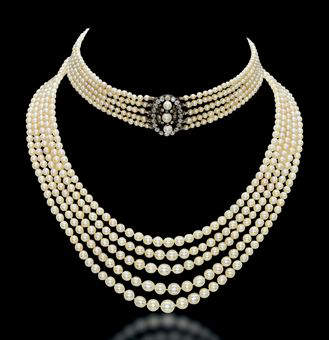 The total number of pearls in the necklace

The number of pearls in each of the five rows of the necklace are as follows :-

Thus, the total number of pearls in the necklace is 983 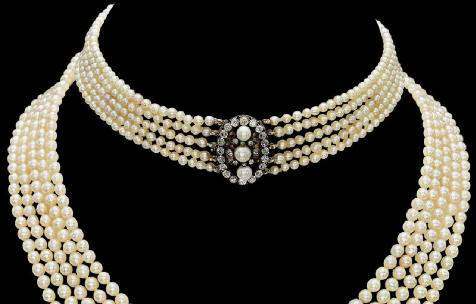 Thus, an approximate estimation of the weight of the necklace is around 212 grams.

Each of the five strands in the necklace is attached separately to the clasp behind, which is oval-shaped and set with three spherical pearls in a vertical line, in the center, and surrounded by a single-row of 20 old-cut diamonds. The central pearl in the vertical line appears to be  surrounded by 8 circular-cut smaller diamonds. The metal used on the clasp is not known, but most probably either yellow gold or silver. The use of platinum in jewelry became popular during and after the Edwardian period (1901-1920), and white gold was introduced during the Art Deco period in the 1920s. 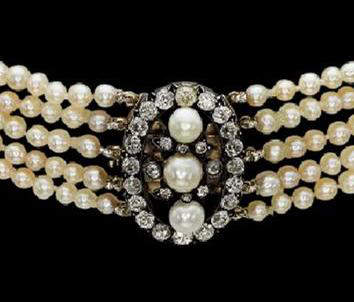 The shape of the pearls

The shape of the pearls in the necklace appear to be perfectly spherical in the photograph. However, close examination of the zoomed image of the necklace show that there are also near-spherical, button-shaped, oval and somewhat baroque shaped pearls among them. This is to be expected, as in natural pearls perfectly spherical pearls are an extreme rarity, and putting together a necklace of not just one strand, but five different strands is a near impossibility.

Color and overtone color of the pearls

Luster and orient of the pearls

The surface quality of the pearls

The surface quality of the pearls in the necklace are also exceptional, with most of the pearls apparently blemish-free or with minor blemishes.

History of the Natural Pearl and Diamond Five-Row Necklace

The geographic range of Pinctada radiata

Given the period of origin of the necklace as the late 19th-century, and the possible species from which the pearls originated as Pinctada radiata, we can conclude that the most probable source of the pearls is the Persian Gulf or the Gulf of Mannar, where a pearl fishery based on Pinctada radiata, persisted until the early 20th-century. In the Persian Gulf the natural pearl industry persisted into the 1930s and 1940s, until the final death blow was given by Mikimoto after the popularization of cultured pearls. In the Gulf of Mannar in Sri Lanka, the natural pearl industry collapsed in 1906, following over exploitation and depletion of oyster resources. Thus, the pearls in the necklace could have come either from the Persian Gulf and the Gulf of Mannar, the most ancient sources of pearls in the world. The Atlantic pearl oyster of Venezuela, that produced pearls of the same range in size and yellowish-white hue, could not have been a source, as the oyster beds of Venezuela, were abandoned in the mid-17th century after intensive exploitation by the Spanish for over 150 years, since their discovery in 1498, by Christopher Columbus during his third voyage. Another ancient source of oriental pearls, the waters off Leizhou Peninsula and northern Hainan Island in China, which was exploited since the 1st-century B.C. remained active until the 17th-century A.D. when the resources were depleted.

Based on the slightly yellowish overtone color, the most probable source of the pearls in the necklace is the Persian Gulf

Out of the two possible sources of the pearls, the Persian Gulf and the Gulf of Mannar, we can still eliminate one, by considering the overtone colors of the pearls. White, yellow and gold are common body colors of these pearls, with overtone colors of silver, pink, and cream. Ceylon pearls from the Gulf of Mannar, were renowned for their white color, with silver overtones - silvery-white pearls. Pearls with yellowish hue were rare among Ceylon pearls. On the other hand, Persian Gulf pearls from the waters of Bahrain and other Gulf countries also had the desirable silvery-white colors, but pearls of yellowish hue, in which a faint yellow color appears as an overtone on a white body color, are more common. Since, the pearls in this necklace appear to have the slightly yellowish overtone on a white body color, the most probable source of these pearls is the Persian Gulf.

The five-row antique pearl and diamond necklace was allocated Lot No. 138, at the Christie's Geneva Sale 1374, held on May 12, 2010, and was accompanied by report no. 02404, dated January 8, 2010, issued by the Horsham GPL Gem & Pearl Laboratory, certifying that the pearls in the necklace were natural saltwater pearls. A pre-sale estimate of 80,000-100,000 CHF (US$ 72,195-90,244), was placed on the necklace. However, in keeping with the recovery of the strong auction demand for antique natural pearls, which was prevalent prior to the global economic recession, the antique pearl and diamond necklace, with an unknown historic provenance, but believed to be 100-150 years old, sold for an enhanced price of 147,000 CHF (US$ 132,682), which was  US$ 60,487 more than the lower estimate and US$ 42,438 more than the upper estimate. The strong showing of this natural pearl necklace at the auctions, and other pieces of jewelry incorporating natural pearls, was a clear indication of the recovery of the strong auction market for natural pearls, after the recent worldwide economic recession. The enhanced price realized was mainly due to its natural provenance backed by a certificate from a recognized laboratory, as well as its purported age believed to be 100-150 years old. The lack of a historic provenance was a drawback for the sale of this item, which undoubtedly would have registered two or three times more than the price realized, if backed by a clear-cut provenance.