The Aphrodite pin is a gold-plated bronze pin dating back to around 300 BC, discovered from the Sanctuary of Aphrodite, the Greek goddess of love, beauty and desire, whose Roman equivalent was Venus, that was situated at the old city Phaphos, on the southwestern coast of Cyprus, the chief center of worship of the Goddess. Aphrodite in the Greek Language means "risen from the foam" signifying the legend of Aphrodite arising from the foam in the sea, near Paphos, Cyprus, after Cronus cut-off Quranos' genitals and threw them into the sea, where the immortal flesh transformed into a white foam, from which grew a girl, the goddess Aphrodite, who floated on a scallop shell in the sea. The pin is believed to have been dedicated by the wife of a member of the Ptolemaic court, the Egyptian dynasty that ruled Cyprus for over 2 ½ centuries, beginning from 294 BC. An inscription on the pin reads "To the Paphian Aphrodite Eubola vowed this the wife of Aratas the kinsman and Tamisa". 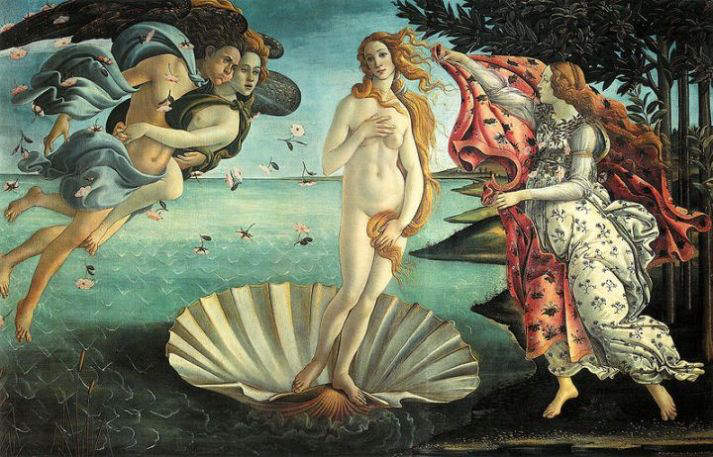 Aphrodite- The Greek Goddess of Love, Beauty and Sexual Desire

Characteristics of the Aphrodite Pin 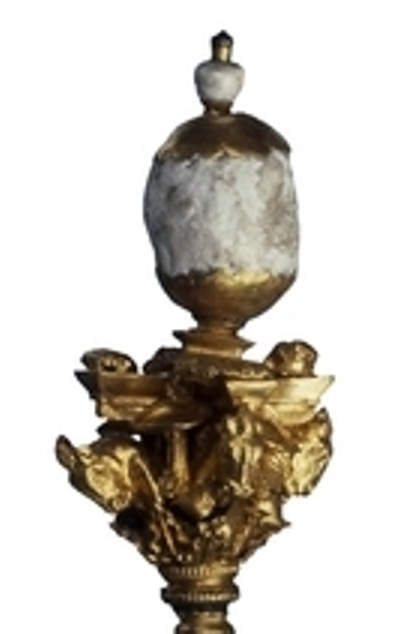 The Head of the Aphrodite Pin

The gold-plated bronze pin has a length of 17.80 cm and a weight of 538.00 grams. The pin is crowned by a large gold-capped, white, almost oval-shaped baroque pearl, surmounted by a much smaller, almost drop-shaped white pearl, with a gold knob on top. According to some sources both pearls are saltwater pearls, but originated from different sources. Other accounts describe the larger pearl as a saltwater pearl and the smaller pearl as a freshwater pearl. The head of the pin cast in bronze and plated with gold, represents four goats' heads separated by lotus flowers, arising from an acanthus foliage. Above this, are four doves with outspread wings, leaning forward to drink from the cup of a lotus flower

The discovery of the Aphrodite pin

The Aphrodite pin was discovered by archaeologists at the site of the sanctuary of Aphrodite that was situated at the old city of Phapos, near the modern village of Kouklia, on the southwestern coast of Cyprus. The sanctuary of Aphrodite was the main religious center in the island of Cyprus, in ancient times, and was well known throughout the ancient Mediterranean region. The sanctuary dates back to around 1200 BC. During the Roman period the sanctuary was connected to the new city of Paphos to the west, by a sacred road. Cyprus, came under the rule of the Ptolemies of Egypt, for nearly two and a half centuries, from 294 BC. It is believed that during this period of rule, the Aphrodite pin was dedicated by the wife of a member of the Ptolemaic court to the goddess Aphrodite. An inscription found with the pin reads as follows :- "To the Paphian Aphrodite Eubola vowed this the wife of Aratas, the kinsman and Tamisa." 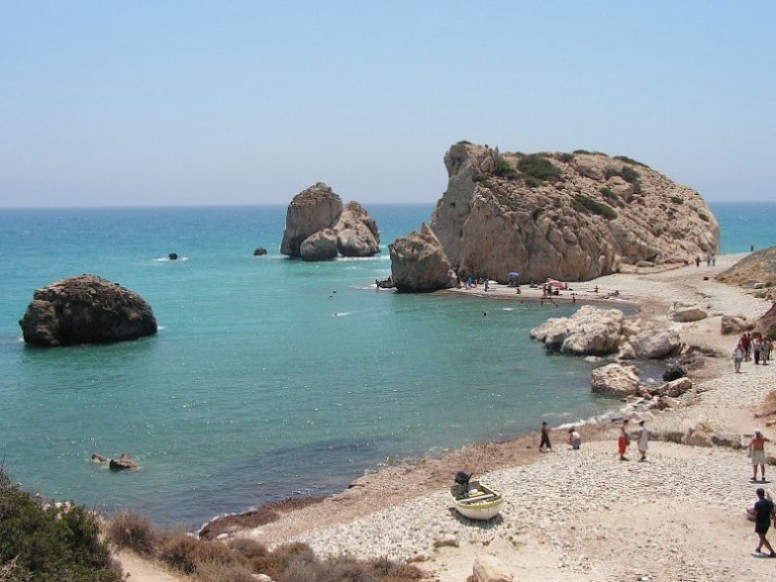 Petra tou Romiou (Rock of the Greek) - Legendary Birthplace of Aphrodite in Paphos,Cyprus

An explanation of the symbols found on the pin

Some of the symbols Aphrodite was associated with and often depicted with, were the sea, dolphins, doves, swans, clams, scallop shells, pearls, pomegranates, apples, myrtle, rose trees and lime trees. Two of these symbols, pearls and doves are found on the pin. But, the lotus flower on the pin appears to have been borrowed from the Egyptian goddess Isis. According to another legend of the birth of Aphrodite, she was hatched by the sacred doves of the goddess Isis, from an egg that fell from the sky into the River Euphrates. Perhaps this explains the depiction of four doves with outspread wings, leaning forward to drink from the cup of a lotus flower.

The significance of the discovery of the pin

The discovery of the Aphrodite pin has great historical significance, associated with the worship of Aphrodite as a goddess in ancient Greece and Cyprus. Apart from this it also has a great significance in the history of jewelry crafting, as this is the oldest cultural object incorporating pearls that has been ever discovered.

Even though pearls had been used in jewelry since time immemorial, the Aphrodite pin is the oldest cultural object, dating back to the 3rd-century BC, that has ever been discovered, incorporating natural pearls. However, the oldest piece of jewelry incorporating pearls, ever discovered is the "Susa Pearl Necklace" discovered in 1901 by archaeologist J. Morgan, in Susa the capital of ancient Elam of the Elamite civilization, that was located in the southwest of modern day Iran, in the province of Khuzestan, inside a bronze sarcophagus, belonging to a mummified body, and dating back approximately to the 9th to 6th century B.C. This pearl necklace is exhibited in the Persian Gallery of the Louvre Museum in France. See photograph below. 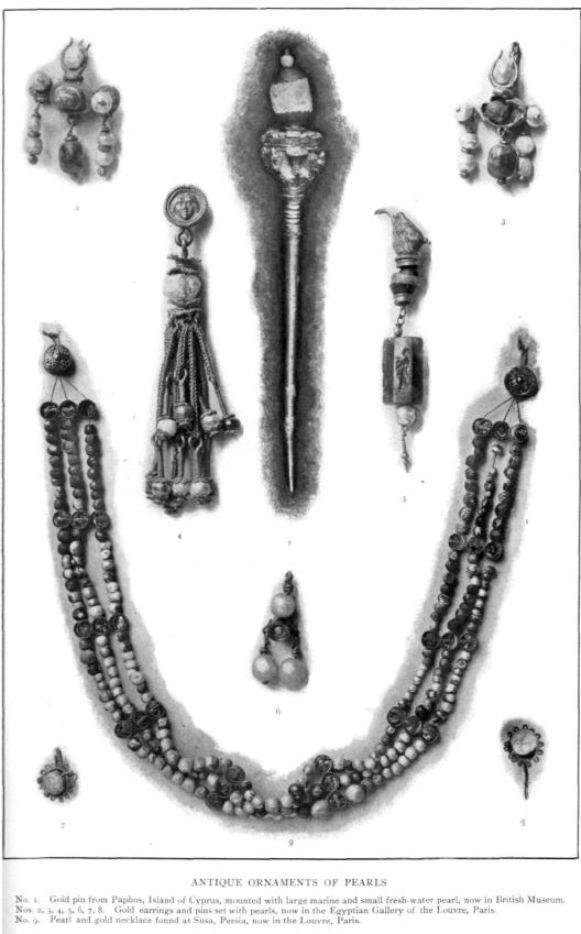 In the above photograph extracted from The Book of the Pearl by Kunz & Stevenson, Fig.1 is the Aphrodite Pin from the British Museum and Fig.9 is the triple-row pearl and gold Susa Necklace from the Louvre Museum. Other pearl ornaments in the picture are from the Egyptian Gallery of the Louvre Museum

The possible source of the pearls in the Aphrodite pin

The Hub of the International Pearl Trade in ancient times

Given the fact that the Aphrodite pin originated around 300 BC, the possible source of the pearls can be safely guessed, considering the main source of pearls during this period. The hub of the international pearl trade since ancient times has been the Persian Gulf, the Red Sea and the Gulf of Mannar. 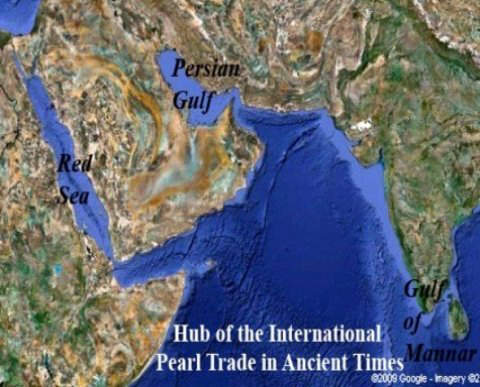 Persian Gulf, Red Sea and the Gulf of Mannar - the Hub of the International Pearl Trade in Ancient Times

The Gulf of Mannar, one of the most ancient sources of pearl in the world

The Persian Gulf and the Gulf of Mannar, between Sri Lanka and India are the most ancient source of pearls in the world. King Solomon's ships are believed to have reached the ports of Sri Lanka, in the 10th-century BC,  from where they collected pearls, rubies, sapphires, ivory and peacocks. The Phoenician trade fleets also sailed to the Gulf of Mannar, to purchase pearls. The historical chronicles of Sri Lanka, record gifts of pearls sent by Sri Lankan kings to Indian kings in the 5th-century and 3rd-century BC. Megasthenes, the Greek Ambassador to the court of the Mauryan king Chandragupta, wrote in the 3rd-century BC, that the Island of Taprobane (Sri Lanka) was more productive of gold and large pearls than India. Sri Lanka, was known to ancient Greeks as "Palaesimoundu" and "Taprobane" and the Island of Mannar, the center of the pearl trade as "Epidorus." From the Greeks the pearl trade in the Island nation pass to the Arabs, and later starting from the early 16-th century successively to the western nations, the Portuguese, the Dutch and finally the British, who abandoned the pearl banks of the Gulf of Mannar in the early 20th-century 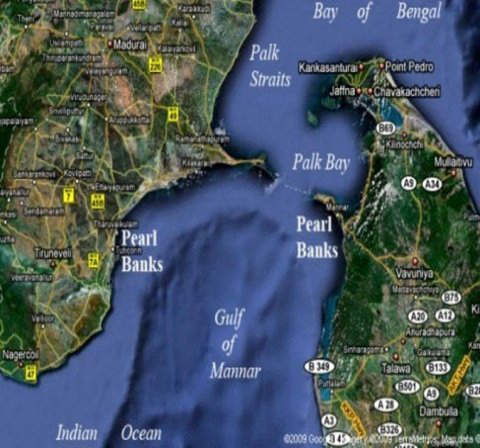 Pearl Banks of the Gulf of Mannar

The Persian Gulf another ancient source of pearls in the world

The Persian Gulf is also a very ancient  and prolific source of pearls in the world, dating back to over four millennia, and whose pearls entered the courts of ancient kingdoms such as those of Egypt, Phoenicia, Greece, Rome etc. Greek historian Pliny and the Roman geographer Ptolemy have referred to the high-quality of Persian Gulf pearls in their writings. The ancient Romans referred to the Island of Bahrain, where a pearl industry existed since time immemorial, as the Island of Tylos. The Greek historian Isidorus of Charax, also refer to the Island of Bahrain in the 3rd-century BC. Thus the most probable source of the pearls in the Aphrodite pin are either the Persian Gulf or the Gulf of Mannar, the main sources of pearls in the world, at the time the pin was designed. 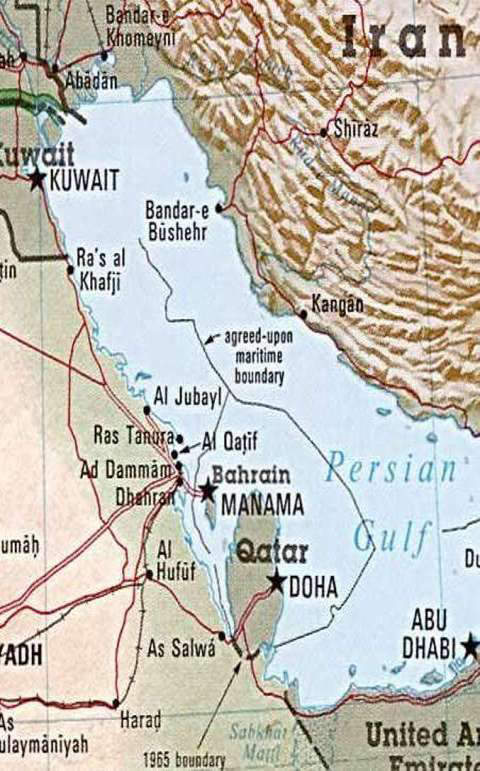 The Aphrodite Pin is exhibited in the British Museum 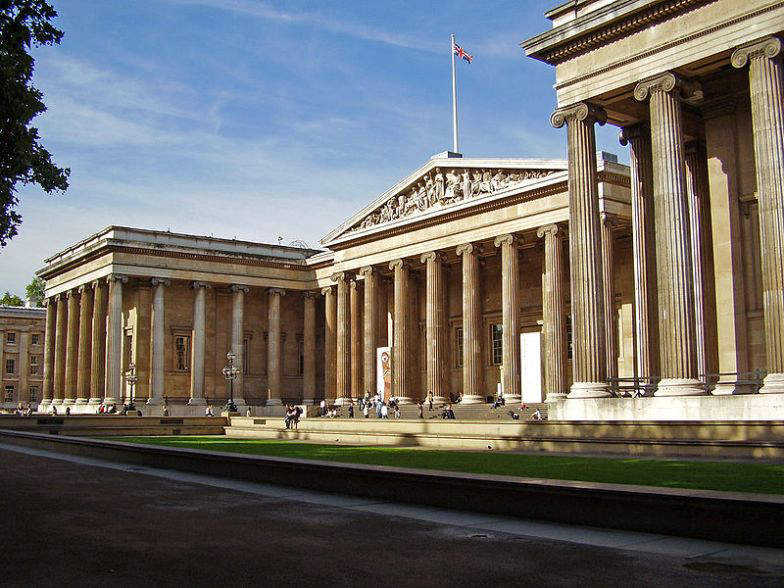 The British Museum where the Aphrodite Pin is exhibited

The Aphrodite pin was gifted to the British Museum after its discovery, by the Cyprus Exploration Fund. The pin is exhibited in Room 72 of the British Museum, dedicated to exhibits from Ancient Cyprus. The ancient pin was given on loan to the American Museum of Natural History, and was featured in their traveling exhibition, that was held in several museums in the United States and around the world. The exhibition known as "Pearls: A Natural History" was first held at the AMNH, in New York City, in October 2001, and was followed by other exhibitions in museums such as the Field Museum in Chicago, the Fembank Museum of Natural History in Atlanta, the Houston Museum of Natural History, and the Alden B Down Museum of Science & Art in Midland, Michigan. The exhibition then moved to the Royal Ontario Museum in Canada from September 2004 to January 2005, the National Science Museum in Tokyo from Oct 2005 to January 2006, the Australian Museum in Sydney from April 2006 to August 2006, the Abu Dhabi Cultural Foundation, UAE from December 2006 to January, 2007 and National History Museum of Paris from October 2007 to March 2008.

2) Aphrodite - From Wikipedia, the free encycllopedia