The name refers to a diamond and an irregular or baroque drop-shaped pearl pendant necklace that appeared at the Bonhams Sale 17885, held on May 12, 2010 at Knightsbridge, London, and sold for £5,400 inclusive of the buyers premium. Except for the length of the pendant, the dimensions of the baroque pearl or its weight are not given. Yet, considering the size of the pearl as seen in the images of the necklace, and the rarity of such pearls we decided to include it in our list of famous pearls, and create this webpage especially dedicated to this rare pearl.

The necklace, which was designed around 1915, is made of a fine trace-link chain, made of a white metal such as silver or platinum, but not white gold, which was first introduced only in the 1920s. The length of the chain is 76.4 cm equivalent to 30 inches, falling within the range of an "Opera" for pearl necklaces. Thus, the chain necklace is quite long, and the chain is interrupted at symmetrical positions by small white seed-pearls. 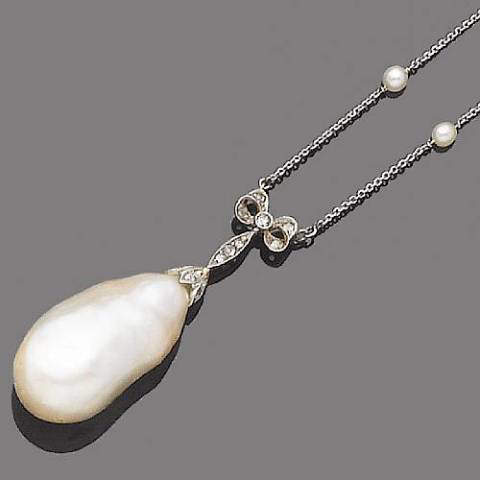 At the lower end of the necklace the two ends of the chain are linked by loops to a diamond set ribbon-bow, also made up of platinum or silver. The ribbon-bow designed with thin sheets of metal, is millegrain set with rose-cut diamonds. A large rose-cut diamond is mounted at the point where the knot of the bow is supposed to be present. Another large rose-cut diamond is placed at the center of the navicular-shaped strip arising from the bow. The lower end of this diamond-set navicular strip is attached to the bell-cap arrangement, by which the pearl is suspended. The segments of the bell-cap are also set with mille-grain set diamonds

Features of the baroque pearl

A derivation of the approximate weight of the pearl, by comparison with drop-shaped pearls of known dimensions


The shape of the baroque pearl

The color of the pearl

The color of the baroque drop-shaped pearl is white, a color caused by the absence of colored pigments that are usually combined with the conchiolin component of nacre, thus allowing the white color of aragonite to show through.

The luster and orient of the pearl

The surface quality of the pearl

In spite of the uneven surface of the baroque pearl, the surface quality of the pearl appears to be blemish-free.

History of  the Diamond and Baroque Pearl Pendant Necklace

The Diamond and Baroque Pearl Pendant Necklace is believed to have originated around the year 1915, during the period of jewelry history known as the "Belle Époque Period" in French, meaning "beautiful times" in English. The period is also known as the "Edwardian Period" and "beautiful times" refer to the period of fun and frivolity ushered in after the long period of mourning during the latter part of Queen Victoria's rule, that ended after King Edward VII ascended the throne of the United Kingdom in 1901.

Distinct jewelry designs and motifs were introduced during this period, and so were new materials such as platinum and invisible jewelry setting styles such as the mille-grain setting, knife-edge settings etc. For a detailed account of features of jewelry of the Belle Époque period please refer to our webpage on Belle Epoque Pearl & Diamond Collier De Chien

1) The use of the "white on white" color scheme on the necklace. Such schemes that included white diamonds and pearls set on platinum metal,  that enhanced the radiance of the gemstones was a common feature of the jewelry of the Edwardian period.

2) The white metal used in the trace-link chain is not known, but if the metal used is platinum, it provides a strong line of evidence for the Belle Époque provenance of the necklace, as platinum was the main metal used in jewelry during the Edwardian period.

3) The cut employed on the diamonds set in the ribbon-bow and bell-cap of the pearl, is mainly rose-cut. Diamond cuts used in the Belle Époque period were rose-cut, old mine-cut and old European-cut. The modern brilliant-cut was first introduced by Gabi Tolkowsky only in 1919, just before the onset of the Art Deco period.

4) The settings used for the rose-cut diamonds on the ribbon-bow and the bell-cap was mille-grain setting. This was a type of invisible setting, like the knife-edge setting, that made use of the minimum of metal to hold gemstones, and revealed more of the gemstones.

The Source of the Baroque Drop-shaped Pearl in the Necklace

The natural pearl fisheries that were active in the early 20th-century, before the onset of World War II

Given the period of origin of the Diamond and Baroque Pearl Pendant Necklace as circa 1915, provided that the baroque pearl did not come from a much older piece of jewelry that was dismantled, there are only a few sources from which the pearls could have originated, as natural pearl fisheries were active only in a few countries prior to the onset of World War II. Some of these countries where the natural pearl fisheries were still active were the countries around the Persian Gulf, the most ancient source of pearls in the world, Baja California in the Gulf of Mexico, the source of natural black pearls in the world for over 400 years, and northwestern Australia centered  around the city of Broome, the world's largest producer of mother-of-pearls feeding the shell button industry of Europe. A natural pearl fishery may also have existed in Southern China, some of the islands in the Philippines and around the Mergui Archipelago in Burma.

The pearl fishery in the Persian Gulf was based on the oyster species Pinctada radiata, the most prolific pearl producer since very ancient times, which produced medium sized pearls ranging in size from 3 - 8 mm, apart from large numbers of seed pearls less than 2 mm in size. Pinctada radiata had also sometimes produced exceptionally large pearls, but this is extremely rare. Pinctada radiata grows to a maximum size of 7 - 8 cm. Thus, it is quite possible that a baroque drop-shaped pearl of dimensions 2.4 cm (24 mm) x 1.2 cm (12 mm) could have originated inside this oyster species, even though the chances of such a pearl being produced was extremely rare. However, given the enormous quantity of production of natural pearls annually in the Persian Gulf at that time, at least one or two pearls of enormous size might have been among this annual production. Thus, the Persian Gulf was a possible source of this baroque drop-shaped pearl.

Baja California in Mexico was mainly a source of black natural pearls produced by the oyster species, Pinctada mazatlantica. The pearls produced were actually a by product of the mother-of-pearl industry, that supplied the shell button factories of Europe. Thus, the baroque drop-shaped pearl being a white pearl, could not have originated in Baja California.

Broome, in western Australia is another possible source of the baroque drop-shaped pearl

The other source of natural pearls in the world at that time was Broome, in northwestern Australia, based on the oyster species, Pinctada maxima, the silver-lipped pearl oyster. Here too pearls produced were actually a by-product of the mother-of-pearl industry, that supplied the shell button factories of Europe. Natural pearls produced by Pinctada maxima, the silver lipped pearl oyster, were mainly silvery-white in color, apart from silver, silver-pink, cream and yellow. These pearls also known as natural South Sea pearls had a range in size of 9 mm to around 20 mm, but occasionally pearls of size much greater than this had been produced. Pinctada maxima can grow to a maximum size of 30 cm (12 ins.) in diameter and have larger gonads. Thus, pearls of extraordinary sizes have been produced by Pinctada maxima, such as the Arco-Valley Pearl with dimensions of 7.9 cm (79 mm) x 4.1 cm (41 mm) x 3.4 cm (34 mm) and weight of 575 carats (2,300 grains), believed to be the largest nacreous pearl in the world. Hence, the white baroque drop-shaped pearl with approximate dimensions of 2.4 cm (24 mm) x 1.2 cm (12 mm), could have been easily produced inside the oyster species Pinctada maxima. Therefore northwestern Australia was a possible source of the pearl.

A natural peal fishery existed since very ancient times around the Mergui Archipelago in Myanmar and the Sulu Islands of the southern Philippines. This pearl fishery may have existed well into the 20th-century, but the pearls produced were mainly golden in color, originating in the variety of Pinctada maxima known as the golden-lipped oyster. In southern China too a natural pearl fishery existed since very ancient times around the Leizhou Peninsula, based on a Pinctada species very closely related to Pinctada radiata, producing medium sized pearls and seed pearls. Pinctada maxima another oyster species found in the South China sea, was also exploited for its natural pearls. The Arco-Valley Pearl, the largest nacreous pearl ever discovered is believed to have originated in the oyster species Pinctada maxima in the waters off southern China, which is part of the sea known as the South Sea, that extends from southern China to northern Australia, the natural habitat of Pinctada maxima, both the silver-lipped and golden-lipped varieties. If a natural pearl fishery based on Pinctada maxima existed in the waters off southern China during the early 20th-century, the baroque drop-shaped pearl might well have originated in these waters.

The Diamond and Baroque Pearl Pendant Necklace is sold for a moderate price at the Bonhams Jewelry Sale 17885, held on May 12, 2010

The Diamond and Baroque Pearl Pendant Necklace was listed as Lot No.272,and referred to as "A Baroque Pearl Necklace, circa 1915" at the Bonhams Jewelry Sale 17885, held on May 12, 2010, at Knightsbridge, London. The lot was accompanied by a laboratory report bearing no.1003/13, dated March 12, 2010, issued by Gwilym M. Jones, certifying that the baroque drop-shaped pearl is a natural saltwater pearl. The lot was sold for £5,400 a moderate price, given its antique provenance, originating from the Belle Époque period, and the enormous natural baroque drop-shaped pearl incorporated in it. A more detailed historic provenance of this antique piece might have enhanced the final price realized.

6) Pearls Without Price : The Rise And Fall Of A Sometimes-Precious Gem - by Bennet Bronson. Speech delivered to the Chicago Literary Club, April 10, 2000. www.chilit.org