The name refers to an exceptional Belle Époque natural grey/brown pearl pendant necklace, that appeared at a Christie's Contemporary Jewelry and Watches Sale, held on April 29, 2008, at Jumeirah Emirates Towers Hotel, in Dubai, the United Arab Emirates, believed to have originated in the year 1900, during the Belle Époque period.

Characteristics of the Pearl Pendant Necklace 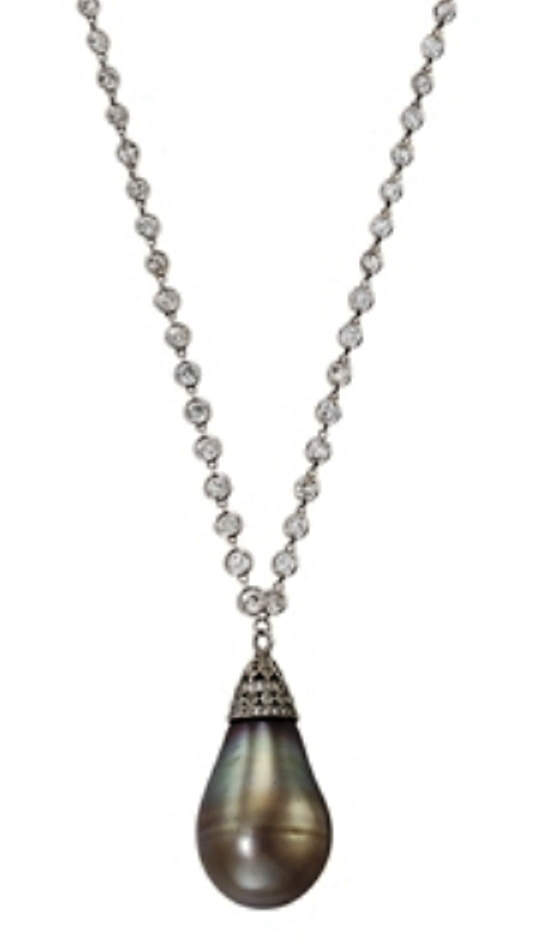 The shape of the pearl

The pearl which forms the centerpiece of this pendant necklace is a perfectly symmetrical, natural, drop-shaped pearl. The perfect symmetry of this natural pearl is indeed  very stunning, an extremely rare occurrence in nature, where the usual tendency is to form baroque pearls. GIA classifies pearls into three basic shapes - 1) Spherical  2) Symmetrical and  3) Baroque. This natural drop-shaped pearl falls under the second category. Apart from drop-shape other shapes that fall under Symmetrical pearls are pear-shape, oval-shape, button-shape. A Symmetrical pearl has only one line of symmetry through which the pearl can be divided into two equal halves.

The color of the pearl

The color of the pearl has been described in the Christie's website as grey/brown. However, according to photographs of the pearl, grey color appears to be the main body color of the pearl, and brown color appears to be an overtone color. Thus, this pearl appears to fall under the category of black and grey pearls, produced by the pearl oyster species Pinctada margaritifera. The grey color of these pearls is produced by melanin pigments, secreted by special secretory cells in the mantle. The melanin pigments combine with the protein component of nacre, conchiolin. Overtone colors, that appear to float over the surface of the pearl, are produced by the interference of light as it passes through alternating layers of aragonite and conchiolin. Overtone colors tend to modify the body color of pearls. If brown is an overtone color and grey the body color, the combination of the two colors is known as brownish-grey.

The weight of the pearl is 56.81 carats, which is equivalent to 56.81 x 4 = 227.24 grains. From the table below it is seen, that based on the weight of the pearl, this drop-shaped grey/brown pearl is the 14th largest nacreous pearl recorded, the seventh largest drop-shaped pearl, and the largest colored drop-shaped pearl in the world. It is also the largest and most perfectly symmetrical drop-shaped pearl in the world, as all other six pearls above it are irregular or asymmetrical drop-shaped pearls, except perhaps the "La Regente" Pearl, which is a pear-shaped drop pearl. Likewise, out of the six larger pearls above, only the La Regente Pearl is more attractive than this pearl, whereas all others have signs of distress such as lines caused by drying or staining.


The dimensions of the pearl

The luster and surface quality of the pearl

Description of the necklace and pendant

The grey drop-shaped pearl with a brownish overtone is mounted with a bell cap at its narrower end, carrying  a hook for attachment to a necklace. The bell cap carries a motif of circular bands, circles and leaves, which is mounted with small diamonds. The pearl-pendant so formed is attached to a spectacle-set chain, 78 cm long. The metal used for the bell cap and chain must be platinum, the common metal used for necklaces during this period. The design of the necklace and pendant is believed to belong to circa 1900 during the Belle Époque period.

"Belle Époque" in French means "beautiful time" and the term is usually applied to refer to the Edwardian Period in England, the period that immediately followed the long period of mourning of Queen Victoria, which extended from the time of death of her husband in 1861 to the time of her own death in 1901. During this period clothing and jewelry designs became more somber and austere. Full mourning colors such as black and half-mourning colors such as gray, mauve and purple, were the colors used for clothing. Jewelry colors also followed the same trend, black jewelry set with black onyx, jet and vulcanite becoming popular. Amethysts (purple) and red garnets were also used in mourning jewelry.

The death of Queen Victoria  in 1901, followed by the ascension of her son Edward VII to the throne of the United Kingdom, marked the beginning of an era of elegance, fun and frivolity, that came to be known as the "Belle Époque" period, after the long period of mourning of Queen Victoria. The period coincided with the acquisition of new wealth by the upper and middle classes, and the birth of the automobile and movie industries. Edward VII's period of rule was short, lasting until his death in 1910, but the "Belle Époque" period continued until the onset of World War I. Belle Époque period coincided with the period known as Art Nouveau period in France, that started around 1890 and lasted until the beginning of World War I.

A characteristic feature of the clothing and jewelry designs of the "Belle Epoque" period, was the use of light and delicate material, such as delicate fabric, lace and feathers in clothing and the introduction of Platinum as the main metal in jewelry manufacture, which enabled the creation of invisible, lightweight settings that made use of minimum of metal to hold gemstones. White on white color scheme for jewelry settings became very popular, that made use of white diamonds and pearls on platinum, that enhanced their radiance. Pearl chokers were introduced during this period, which were sometimes worn in combination with long strings or chains of pearls. Necklaces with  negligee pendants, consisting of two pearl drops of unequal length, suspended from a centerpiece also had their origin in the "Belle Époque" period. Jewelry of the "Belle Époque"  were graceful, decorated with openwork garland, lacy, filigree designs. Dog collars, sautoirs, lavalieres, and garland style festoon necklaces became popular during this period. Spectacle-set chains also originated during this period.

The possible source of the grey/black - colored pearl

The saltwater oyster species that produced the grey/black pearl with the brownish overtone, is undoubtedly Pinctada margaritifera, the black-lipped pearl oyster, which has a wide geographic distribution extending from the Persian Gulf, through the Indian Ocean and the South Sea to the Pacific Ocean, up to the Gulf of California in Mexico. In the Pacific Ocean, the black-lipped pearl oyster has a distribution from Japan in the northern Pacific to the French Polynesian Islands in the southern Pacific. The species reaches its greatest abundance in the atolls lagoons of French Polynesia whose capital is Tahiti, from which the pearls derive their internationally recognized trade name Black Tahitian pearls.

The source of natural black pearls throughout the ages

In ancient times the main source of black pearls was the Persian Gulf, where the species Pinctada margaritifera co-existed with the dominant species Pinctada radiata, the main source of white pearls. However, in the 16th and 17th centuries with the discovery of black pearls in the Gulf of California, Baja, California became the main source of black pearls, that entered the markets in Europe. In the early 19th-century after the arrival of European explorers and traders, black-lipped pearl oysters in the Polynesian Islands were exploited on a large scale for their shell, for the international shell button industry. Natural black Tahitian pearls became a by-product of this industry, and French Polynesia became the main source of natural black pearls in the world in the 19th-century. However, like the Gulf of California, pearl oyster resources in the atolls of Polynesia were also exhausted in the 1880s due to over exploitation, and harvesting was abandoned by the end of 19-th century. Japan and northern Australia became a source of natural black  pearls, in the late 19th and early 20th centuries, as the sources of Black Tahitian pearls were gradually exhausted. However, with the successful culturing of Akoya pearls, by Kokichi Mikimoto, in Pinctada fucata martensi in 1916, and the opening of large numbers of Akoya pearl farms in the 1920s and 1930s, the culturing of black pearls from the black-lipped pearl oyster became a distinct possibility, and only a matter of time. In fact, Mikimoto himself continued his research work on the black-lipped pearl oyster, after opening a farm for the oyster on Ishigaki Island in Okinawa. However, it was not until 1931, that he was first able to produce successfully a black cultured pearl. Thus, black cultured pearls first came into the markets in the 1930s. The technology developed by the Japanese for black cultured pearls were adopted for the production of black cultured pearls in Australia and Tahiti in the late 20th-century, and today Australia and Tahiti produce substantial quantities of cultured black pearls, to cater to the international demand in black pearls.

Can Tahiti be the source of the grey/black colored pearl ?

In the 19th-century the main source of natural black pearls in the world was the French Polynesian Islands, and the pearls came to be known as black Tahitian pearls. The famous Drexel Pearl, another perfectly symmetrical natural drop-shaped black pearl, weighing 33.8 carats or 135.2 grains, incorporated in a "Belle Époque" circle brooch by Cartier's of New York in 1905, is believed to have originated in the French Polynesia. Thus, it is quite possible that the grey/black pearl with a brownish overtone incorporated as a pendant in this "Belle Époque" pendant necklace, designed in the year 1900,  too, originated in the French Polynesia.

The necklace is put up for sale at a Christie's auction in Dubai held on April 29, 2008

The exceptional Belle Époque natural grey/brown pearl pendant necklace, was put up for sale by its anonymous owner, at a Christie's Contemporary Jewelry and Watches Sale, held on April 29, 2008, at Jumeirah Emirates Towers Hotel, in Dubai, United Arab Emirates. The necklace was Lot No. 174 under the Sale, bearing No. 7664. The pre-sale estimate of the necklace was placed between $700,000 and $1,000,000. The price realized at the auction that included the buyer's premium was $769,000. The price realized is in keeping with the recent increase in demand and strong auction market for natural pearls, a fact that is brought out clearly by the following table :-

Table of some famous natural pearls/pearl jewelry sold at public auctions conducted by international auction houses, giving the date of auction and the prices realized, during the period 1970 to 2009

The 302.68-grain La Regente Pearl sold in November 2005, has set the record as the single natural pearl that fetched the highest price at a public auction, viz. USD 2,483,968. A significant part of the value of this pearl is no doubt attributable to the historic provenance of the pearl that dates back to 1811, the period of Emperor Napoleon Bonaparte, who is believed to have purchased the pearl and gifted it to his second wife and queen consort Marie Louise, as the centerpiece of a pearl tiara, which was the main component of a complete pearl parure. In comparison, the 227.24-grain grey/black pearl, which is the subject of this webpage, had sold for only USD 769,000. The lesser price realized for this pearl in comparison to the La Regente can be attributed, to the lower weight of the pearl, and more importantly the lack of a historic provenance to enhance its value. Nevertheless, the pearl with its combined characteristics of several desirable features in pearls, qualify to be listed under the category of famous pearls.