The name refers to a dog collar necklace also known as a choker, that appeared at the Christie's "Jewels : The Geneva Sale" held on May 12, 2010. The piece was listed in the catalogue as "A Belle Époque Pearl And Diamond 'Collier de Chien,' By Chaumet." and was assigned Lot No. 166. "Collier de Chien" in French means "Dog Collar," a common term used for the "Choker" necklace, a signature piece associated with the trend setter of the period, Queen Alexandra, the queen consort of King Edward VII. Belle Époque in French means "beautiful time" a clear reference to the period of elegance, frivolity and fun, ushered in after the ascension to the British throne of King Edward VII in 1901, following the death of Queen Victoria, who had remained in self-imposed mourning for almost 40 years, after the death of her beloved husband, Prince Albert in 1861. The House of Chaumet are the renowned high-end jewelers of France, based in Paris, and founded in 1780 by Marie-Etienne Nitot, jewelers to the pre-revolution Bourbon monarchy  and later to the mighty Emperor Napoleon Bonaparte. The dog collar necklace was designed by the expert craftsmen of Chaumet around the year 1905 and carries French assay marks for platinum and gold and Chaumet's stamp of authenticity.

Characteristics of the Pearl and Diamond Dog Collar Necklace

Design features of the necklace 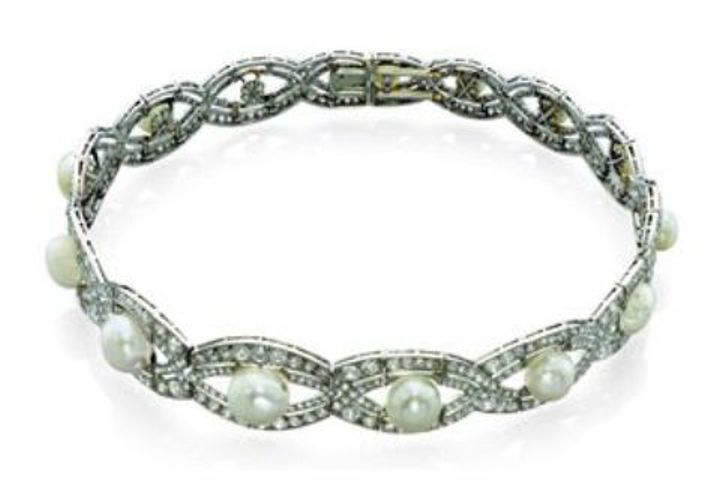 A section of the "Collier de Chien" enlarged

The length of the necklace is 33.5 cm equivalent to 13 inches. According to the modern system of classifying pearl necklaces  based on the length of the necklace, the "Collier de Chien" still falls within the the range of the modern definition of the "Collar" whose length can vary from 10 to 13 inches. Thus, even though the "Collier de Chien" was designed around 1905, and was known as a "Dog Collar" in French, it still fits in to the modern definition of "Collar" introduced for pearl necklaces by Mikimoto in the late 20th-century.

Modern system of classifying pearl necklaces based on length

History of the Pearl and Diamond Dog Collar Necklace

The source of the natural baroque pearls in the necklace

There are 15 natural baroque pearls right round the necklace, out of which 14 pearls are certified to be of saltwater origin, and one pearl of freshwater origin. It is not known which of the 15 pearls is of freshwater origin, but a trained eye could easily distinguish the difference in the luster between the freshwater and saltwater pearls, and thus, easily pinpoint the freshwater pearl. The diameter of the pearls or their weights are not given, but the pearls appear to be medium sized in the range of 8-10 mm. The pearls are silvery-white in color, and have a luster and brilliance associated with natural saltwater pearls. The size range of 8-10 mm is the lower range of pearls produced by the oyster species Pinctada maxima, the South Sea pearl oyster, and the upper range of pearls produced by Pinctada radiata, the Oriental pearl oyster. The silvery-white color is common to both South Sea pearls and Oriental pearls. Thus, the silvery-white natural baroque pearls, could well have originated either from Pinctada maxima or Pinctada radiata. Both, these species were being exploited during the Belle Époque period from 1901 to 1915. Pinctada maxima was being exploited in northwestern Australia mainly for its mother-of-pearl for the shell button industry, and Broome in Australia was the world's largest supplier of mother-of-pearls during this period. Occasional pearls that were recovered from the oysters were a by product of this industry. Pinctada radiata was exploited during this period in the Persian Gulf, mainly for their pearls, as it had been done for over a millennium in the past, being the world's oldest pearl fishing grounds. Thus, the source of the pearls in the necklace could be either the Persian Gulf or the waters off western and northwestern Australia.

Features of jewelry of the Belle Époque period

The Belle Époque period  also known as the Edwardian Period began with the ascension of Edward VII to the British throne in 1901 and extended beyond his death in 1910 until the onset of world war I. This was a period of prosperity for the upper and middle classes. The period also saw the birth of the automobile, the airplane and the movie industries. Clothing and fashions of the period were made of light and delicate fabrics, such as lace and feathers. The features of jewelry produced during the Belle Époque period can be summarized as follows :-

1) Jewelry styles of the period were light and delicate, just as the fabrics worn at that time.

2) Platinum replaced gold and silver as the principal metal in jewelry making.

3) Light weight jewelry designs with invisible settings were created that made use of minimum of metal to hold gemstones, such as knife-edge and mille-grained settings.

4) White on white color schemes were favored  for gemstone set jewelry, such as white diamonds and pearls set in platinum, that enhanced the radiance of the gemstones. The heavy use of diamonds and platinum is a main characteristic of Edwardian jewelry.

6) Queen Alexandria wore a choker type of necklace called a "dog collar" which became very popular during this period. Pearl necklaces were fashionable, and long strands of pearls known as sautoirs, were worn in combination with chokers. Tiaras also became popular, combined with beautiful dangling earrings, such as drop earrings and ear pendants. Necklaces with lavaliere and negligee pendants became popular, and so also were circle brooches, bar brooches, and bangle bracelets. Sporting motifs also became popular, as King Edward was a sport enthusiast.

The "collier de chien" designed during the belle Époque period, around the year 1905, should necessarily included some features of belle Époque jewelry produced during this period. Among such recognizable features are the following :-

1) The piece of jewelry itself, known as the "collier de chien" or the dog collar, was a piece that was popularized by Queen Alexandra, and became a hallmark of this period.

2) The use of white on white color scheme on the piece of jewelry, incorporating white pearls and diamonds on platinum, which was very popular during this period.

3) The use of rose-cut, old mine-cut and old European-cut diamonds on the dog collar necklace.

4) The use of invisible settings on the necklace. The setting of the baroque pearls in the openings between corresponding crests and troughs of different diamond-set platinum bands, is not visible at all, and the pearl appears to be floating or hanging without any support.

5) The heavy use of diamond, and platinum on the dog collar necklace, is a main characteristic of this period.

The above features show that the "collier de chien" undoubtedly originated during the belle Ã©poque period.

A short history of the House of Chaumet

House of Chaumet founded by Marie-Etienne Nitot in 1780

The House of Chaumet, a high-end jeweler based in Paris, with their flagship store, at Place Vendome, in Paris, was founded by Marie-Etienne Nitot in 1780, during the reign of the Bourbon monarch, King Louis XVI, who ruled from 1774 until his arrest in 1792 during the French revolution. Marie-Etienne Nitot had initially worked for Aubert, the jewelers to the court of King Louis XVI and Marie Antoinette. 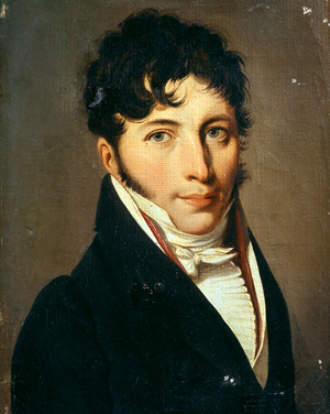 But the real breakthrough in his carrier came when he was appointed as court jeweler by Emperor Napoleon Bonaparte. Marie-Etienne Nitot and his son Francois Regnault Nitot were ardent bonapartists, and Napoleon had a great admiration for their creative abilities. Napoleon Bonaparte commissioned the services of expert jewelry craftsmen Martin Biennais, together with Marie-Etienne Nitot and Francois Regnault Nitot to create the coronation regalia, including the crown and the coronation sword for his coronation and that of Empress Josephine on December 2, 1804. As court jewelers both father and son helped Napoleon to re-assemble the jewels dispersed from the Tresor de la Couronne (Crown Treasury) during the French revolution, and build up a new collection. They also helped Napoleon to acquire precious stones such as diamonds, emeralds, pearls etc. needed for the manufacture of the expensive parures he lavished on his wives.

Francois Regnault Nitot who succeeded Marie-Etienne Nitot in 1809, was the designer of the expensive parures lavished by Emperor Napoleon on his second wife Marie-Louise.

Both Marie-Etienne Nitot and Francois Regnault Nitot, created some exquisite pieces of jewelry for the royal household during their tenure of engagement as court jewelers. Some of the notable pieces of jewelry created by them include the following :-

2) Emerald and Diamond Parure of Marie-Louise, designed by Francois Regnault Nitot to be given as a gift to Marie-Louise, on the occasion of her marriage to Emperor Napoleon in 1810.

4) A 275-carat diamond necklace set with briolette-cut diamonds  and designed by Francois Regnault Nitot, given as a gift by Emperor Napoleon Bonaparte to his wife Marie Louise, on the occasion of the birth of his long-awaited son and heir to the French throne, on March 20, 1811. This necklace today is part of the collection of jewelry of the National Museum of Natural History of the Smithsonian Institution.

Modern history of the House of Chaumet

The House of Chaumet born and nourished in the great Napoleonic traditions of the early 19th-century, had served the high-end jewelry market of France for over two centuries. Visitors to their flagship store, at Place Vendome in Paris, were greeted by a portrait of Napoleon Bonaparte's second wife, Empress Marie-Louise de Habsburg Lorraine. In the painting Marie-Louise is seen wearing jewels made for her by Francois Regnault Nitot, the son of the founder of the company Marie-Etienne Nitot. The Belle Époque Pearl and Diamond "Collier de Chien" (Dog Collar) Necklace, the subject of this webpage, was designed by the expert jewelry craftsmen of Chaumet, around the year 1905. In the 20th-century, Chaumet that maintained their age-old traditions, and high standards of jewel crafting, was managed by the brothers Jacques and Pierre Chaumet. However,  in the latter half of the 20th-century, the company suffered enormous losses in speculative dealings on the price of diamonds, after the sudden drop of market spot prices. The company filed for bankruptcy in 1987, and was purchased by Investcorp, Bahrain's Sovereign Fund. The Company that ran at a loss initially, became profitable again in 1998, with a revenue of 280 million Francs.

Today Chaumet belongs to LVMH, a French Holding Company, with a worldwide network of retail stores

In 1999, Chaumet was purchased by LVMH (Moet Hennessy Louis Vuitton) a French holding company, and one of the world's largest luxury goods conglomerates, with Christian Dior owning a majority stake in the company. Today, Chaumet has a worldwide network of stores, in Europe, America and the Caribbean, Middle East and Far East in Asia, New Zealand and Oceania and several countries in Africa.

The Belle Époque Pearl and Diamond "Collier de Chien" by Chaumet was assigned lot no. 166 at the Christie's sale 1374, Jewels : The Geneva Sale, held on May 12, 2010, at the Geneva - Four Seasons Hotel des Bergues. The lot was accompanied by report no. 55986, dated March 26, 2010, issued by the Swiss Gemstone Research Foundation (SSEF), certifying that 14 pearls incorporated in the necklace are natural saltwater pearls, and one pearl is a natural freshwater pearl. Except for the fact that the necklace was said to be the property of "Lady of Title," there was no clear-cut historical provenance associated with it. A pre-sale estimate of CHF 42,000 - 62,000 was placed on the necklace, equivalent to US$ 37,902 - 55,951. However, the lot realized an enhanced price of CHF 93,000, equivalent to US$ 83,942, which was more than twice the lower estimate and one-and-half times the upper estimate. The significant enhancement in price of the necklace over the estimated values, can be attributed to the natural provenance of the pearls, and its antique nature with clear evidence of its Belle Époque origin.

3) Emerald and Diamond Parure of Marie-Louise, Empress of France

3) A History of Antique Jewelry - www.topazery.com

4) Chaumet - From Wikipedia, the free encyclopedia

5) LVMH - From Wikipedia, the free encyclopedia.