According to William Goldberg's website, the 102-carat oval-shaped beluga diamond is the largest D-color, internally flawless, oval-cut diamond in history. Hence, it appears that the name "Beluga" had been deliberately chosen by the company, to reflect these outstanding characteristics, particularly the D-color or top-color of the diamond, popularly known as white diamonds, sometimes referred to in superlatives such as "whiter than white," "brighter than bright," "diamonds of the purest water" etc. The English word "beluga" is of late 16th-century origin and appears to have been derived from the Russian word "Belukha" which in turn comes from the Russian word "belyi" meaning white. In common parlance the word "beluga" came to be used, to refer to, at first to a small white toothed whale, Delphinapterus leucas, reaching a length of about 4 meters, related to the Narwhal (tusked whales), living in herds mainly in Arctic coastal waters, sometimes also referred to as the white whale. Subsequently, the word "beluga" also came to be applied to the large white sturgeon,the beluga sturgeon (Huso huso, or Acipenser huso) found in the Caspian and Black Seas and the Sea of Azov, that can reach a length of 7.5 meters and weight of 1,300 kg, but whose flesh and caviar are less valuable than those of smaller species. In modern usage the name "beluga" had been extended further to refer to man-made creations such as the wide-bodied super transporter, the Beluga Airbus, the Russian Beluga class submarines and the World War I United States Navy Patrol Vessel, the USS Beluga. 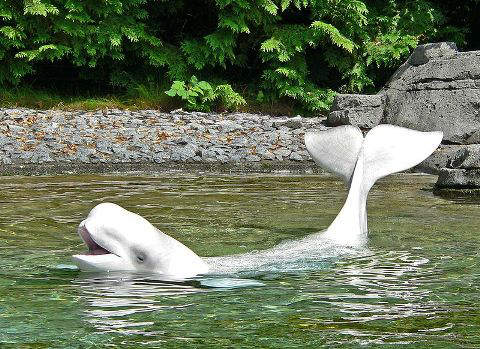 Beluga White Whale in the Vancouver Aquarium in Canada 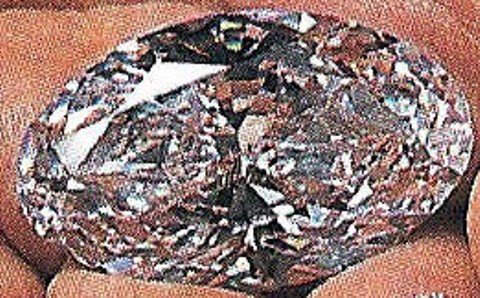 The Beluga Diamond is a rare Type IIa diamond

Being a D-color or Top-color diamond, the Beluga is a rare Type IIa diamond, which are also known as the "purest of the pure" of all diamonds, and described in superlatives as "whiter than white," brighter than bright," "diamonds of the purest water" etc. These diamonds are not only chemically pure but also structurally perfect. Two main factors that cause color in diamonds are 1) chemical impurities such as nitrogen, boron, hydrogen and 2) structural abnormalities such as plastic deformations in the crystal, that impart fancy color to diamonds. In the absence of these two factors, the diamonds are absolutely colorless and fall under the D-color grading also known as "Top color." Such diamonds however, constitute only about 1-2% of all naturally occurring diamonds.

The occurrence of D-color is indeed very rare, but the combination of D-color and internally flawless clarity is still rarer. A further combination of a rare oval-cut and a weight of more than 100 carats, makes the Beluga diamond one of the rarest and most famous diamonds in the world. Hence the characterization of the Beluga Diamond by William Goldberg Diamond Corporation as the "largest D-color, internally flawless, oval-cut diamond in history" is certainly not far from the truth. 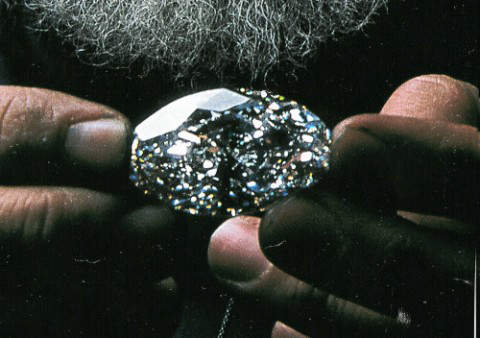 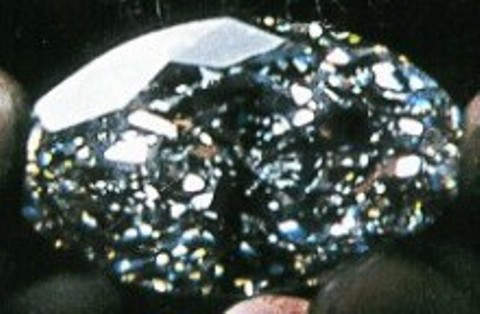 Close-up of the Beluga Diamond

The following table is a "comprehensive" list of 69 known faceted famous diamonds in the world greater than 100 carats arranged in descending order of weights. The table was painstakingly collated by our staff after collecting all available information. The list may not be entirely comprehensive as some diamonds might have been inadvertently omitted or due to lack of precise information. We have tried our best to make the list all inclusive. The list will be revised as more information on other new diamonds are received.

In this list the 102.00-carat Beluga Diamond occupies the 61st-position, below the 102.48-carat Ashberg Diamond.

In the list of famous D-color diamonds over 100 carats in weight the Beluga Diamond occupies the 25th position. This list also shows that the 102.00-carat Beluga diamond is in fact the second largest oval-cut diamond in the world, after the 108.93-carat Koh-i-Noor Diamond the largest oval-cut D-color diamond in the world. However, the oval cut in Koh-i-Noor is a 19th-century cut, and the oval shape is short and fat and more closer towards a spherical shape. The Beluga on the other hand is a modern oval brilliant cut diamond, a cut that was invented by Lazare Kaplan in the early 1960s. The shape of the Beluga is an elliptical oval shape, considered to be the standard modern oval shape for a diamond. Hence the Beluga diamond, is undoubtedly the largest modern oval brilliant cut diamond in the world. 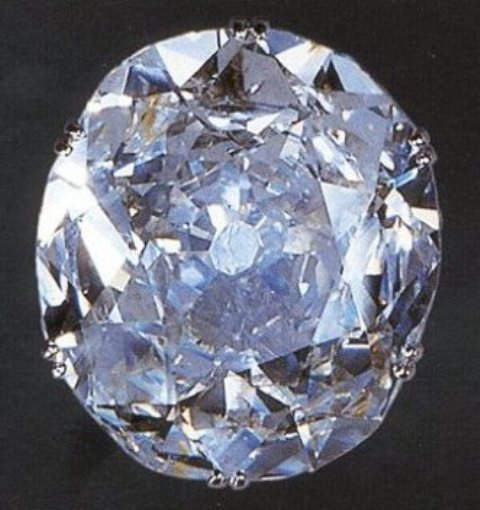 History of the Diamond

The early history of the diamond such as the country and mine of origin, the date of discovery, the circumstances surrounding the discovery, the person or persons involved in the discovery etc. are not known. However, the cut employed on the diamond gives an indication of the possible period in which the diamond originated. The modern oval brilliant cut employed, also known as the oval modified brilliant, was a cut of recent origin, developed by the master cutter, Lazare Kaplan in the early 1960s. Hence the Beluga Diamond most probably originated after the early 1960s. A study of the cuts employed on the satellite diamonds created after the cutting of the main diamond, throws further light on the period of origin of the rough diamond. The second biggest diamond created from the rough, is an Ashoka-cut diamond, a cut patented by the company in the year 2000. This helps to narrow down the period of origin of the rough diamond, from approximately the year 2000 to the year 2002, when the diamond appeared in an article in the National Geographic Magazine.

The Beluga Diamond was featured in an article on blood diamonds in the March 2002 issue of the National Geographic Magazine. The title of the article "Diamonds - The Real Story" is printed in bold letters at the bottom of the coverpage, against the background of an image of a film of blood in red, superimposed by scattered round brilliant-cut diamonds, taking the place of red blood cells, driving home the main theme of the article, viz. blood diamonds. The New York based William Goldberg Diamond Corporation had been in the forefront, together with other leading diamond companies based in America and Europe, in the battle against blood diamonds reaching the US markets, the main consuming nation of diamonds in the world. 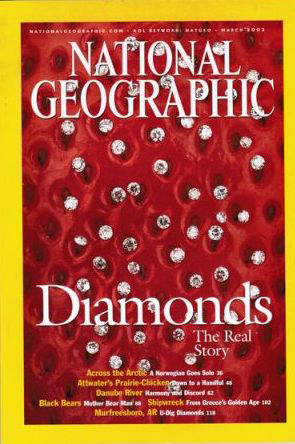 The weight and shape of the rough diamond

The Cutting of the Diamond

The cutting of the diamond was undertaken by a team of master cutters of William Goldberg Diamond Corporation.

The frosted exterior precluded a detailed study of the interior of the diamond, unless a window was created by making the first cut on the stone; a task that was undertaken after a detailed study of the exterior. Eventually the first cut was made, and the window created uncovered the rare quality of the diamond. After a detailed study of the diamond the master cutters of the company severed the diamond into at least four pieces, one large piece of over 100 carats, a medium-sized piece and two smaller pieces. In keeping with the elongated shape of the larger piece, the master cutters decided to transform it into a modern oval-cut brilliant also known as the oval modified brilliant. Accordingly after several months of painstaking labour, the largest rough diamond piece, was eventually transformed into the largest, D-color, internally flawless modern oval-cut brilliant in the world, weighing 102.00 carats. The diamond was appropriately named the "Beluga Diamond" and became a living testimony to the expertise possessed by the company in the processing of diamonds of all types big and small. The Beluga Diamond is said to be the favorite diamond of Barry Berg of the William Goldberg Diamond Corporation.

The cutting of the satellite diamonds

After the completion of the processing of the Beluga Diamond, the master cutters of the company set about working on the smaller pieces, and created three satellite diamonds, with cut and polish not second in anyway to the finish of the main beluga diamond. The second largest piece was transformed into an Ashoka-cut diamond, a cut created and patented by the company in the year 2000. The 3rd-piece was transformed into a trilliant-cut and the fourth and smallest piece into a cushion-cut diamond. 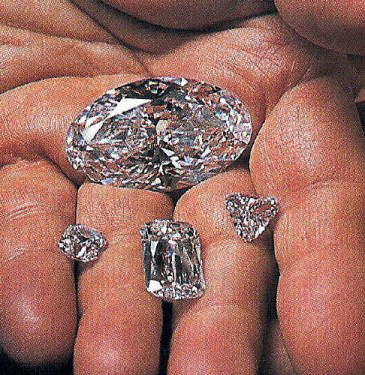 Beluga and the three satellite diamonds 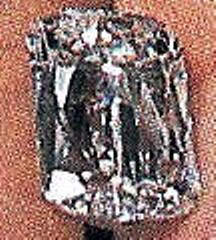 Among some of the other famous diamonds created by company are the 30.06-carat Blue Lili Diamond, the 75.51-carat briolette, the 89.01-carat Guinea Star, 8.9-carat Pink Muse, 137.02-carat Premier Rose, the 31-carat Little Rose, the 5.54-carat Pumpkin Diamond and the 5.11-carat Moussaieff Red. The company also pioneered and patented a new diamond cut in the year 2000, known as the Ashoka-cut, based on an ancient classical cut found on a 41.73-carat Indian diamond mined from the Golconda region, christened the Ashoka Diamond, in memory of the Buddhist warrior emperor Ashoka Maurya of the 3rd-century B.C.

For more details on William Goldberg Diamond Corporation, biography of William Goldberg and his contribution towards the development of the diamond industry please go to our webpage on the Blue Lili Diamond

7) Diamonds That Rock : In Pictures - www.forbes.com