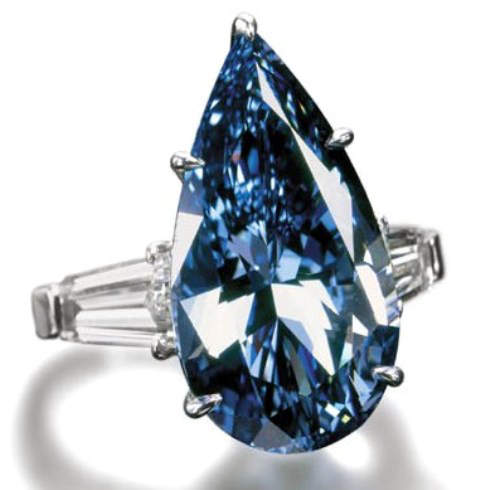 The GIA certificate issued for this diamond on June 19, 2001, states, that it has a modified pear-shaped cut, with a weight of 12.02 carats. The diamond is further stated to be a naturally colored, fancy vivid blue diamond, with a clarity of VVS-2, only slightly less than internally flawless. The dimensions of the diamond are 21.42 x 11.61 x 7.76 mm

The Blue Magic Diamond is a rare Type IIb diamond

The Blue Magic diamond is a rare Type IIb diamond, whose occurrence is less than 0.1 % of all naturally occurring diamonds. The diamond is Type II, because it is nitrogen-free or contains undetectable quantities of nitrogen. Type II diamonds diamonds are again divided into two :- Type IIa and Type IIb.

Type IIa - These diamonds are not only free of nitrogen but also free of all other chemical impurities, such as boron and hydrogen. Being free of impurities, these diamonds are absolutely colorless. The D-F grade of diamonds may belong to this group. They constitute about 1-2 % of all naturally occurring diamonds. However, a very small percentage of these diamonds, perhaps lees than 0.1 % might have undergone plastic deformation in their crystal structure or might have been exposed to natural irradiation over a long period of time. Plastically deformed crystals have rare fancy colors, such as red, purple, and pink, and also brown color. Naturally irradiated crystals, have a green color

Type IIb - These diamonds are free of nitrogen, but instead contain trace quantities of another impurity, boron, which imparts a blue color to the diamonds. All naturally colored blue diamonds fall under this group, including the Blue Magic diamond. A peculiar property of blue diamonds is, that they are semi-conductors, unlike other diamonds which are non-conductors of electricity. The occurrence of blue diamonds is less than 0.1 % of all naturally occurring diamonds. 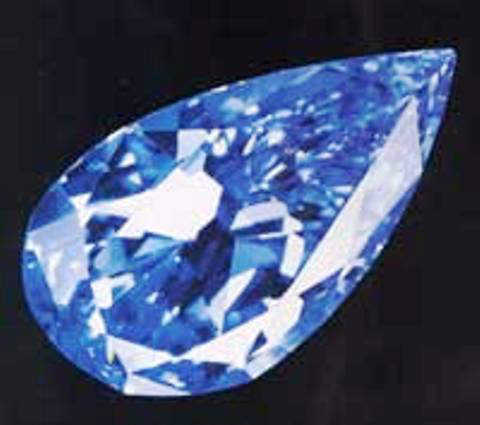 The Blue Magic Diamond removed from its ring setting

Early history of the diamond not known

Existence of the Blue Magic Diamond first revealed in 2001

The existence of the Blue Magic Diamond was first revealed to the outside world, when its anoymous owner entrusted Christie's to put it up for auction at its "Simply Blue" Sale 1289, held in Geneva on November 13, 2001. The 12.02-carat, modified pear-shaped, fancy vivid blue diamond, was set as the centerpiece of a white gold ring, with a tapered baguette cut diamond mounted on either side on the shoulders of the ring. A pre-sale estimate of US$ 5-6 million was placed on the ring, but was however withdrawn from the sale, as it did not realize it's reserve. Since then the diamond has not come up for auction again, and probably still remains the property of the anonymous owner who put it up for auction in 2001, unless of course the diamond was not disposed of by a privately negotiated sale. Given the fact that the diamond first made its appearance at the beginning of the 21st century, undoubtedly shows that the diamond is of 20th century origin.

Historically, the original source of blue diamonds was the Kollur mines near Golconda, in the Southern Indian State of Andhra Pradesh. Golconda was a fortress city, now ruined, lying 8 Km west of Hyderabad City, in North-Central Andhra Pradesh State of Southern India. It was the Capital of the Qutub Shahi Kingdom from 1512 to 1687, one of the five Muslim Sultanates of the Deccan. This was also the period, when the Kollur mines, discovered in the early 16th century, had peak production outputs, as witnessed by Tavernier himself, when he visited Golconda in 1642. Around 20 highly productive mines, employing over 60,000 people were in active production during Tavernier's visit. 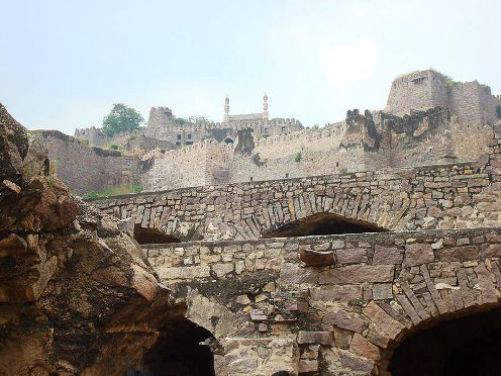 The ruined Fortress of Golconda 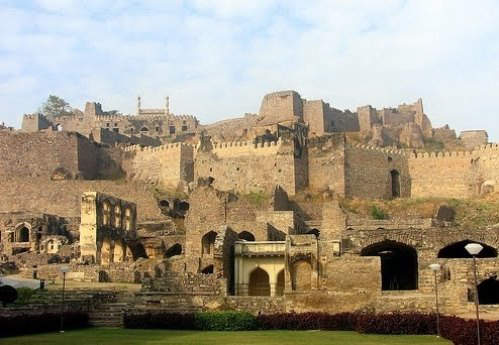 Another view of the ruined fortress of Golconda 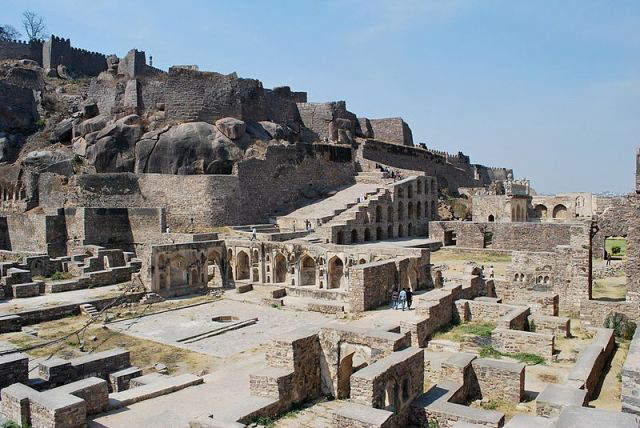 Ruined palaces of the Golconda Fortress

The territory of Golconda lies between the lower reaches of the Godavari and Krishna rivers, and extended to the Bay of Bengal coast. In 1687, the ruling dynasty of Qutub Shahis was overthrown by the Mogul Emperor Aurangzeb, and Golconda was annexed to the Mogul Empire (1526-1857). The Golconda fortress is 3 miles in circumference, with concentric masonary-block walls. Palaces, mosques, and the Qutub Shahi tombs still remain in-tact. The diamonds seem to have been derived from the conglomerate rocks of the nearby hills. The diamond mines known as the Kollur mines, were actually situated around 100 miles east of Golconda, on the right bank of the Krishna river, west of Chintapilly. All diamonds discovered in the Kollur and other mines in the area found their way to the diamond market in the city of Golconda, which was also patronized by foreign nationals such as Persians and Europeans. Several historically important diamonds such as the Hope, Darya-i-Nur, Nur-ul-Ain,  Tereschenko, Dresden Green, Shah, Shah Jahaan, Idol's Eye etc. seem to have originated in these mines. 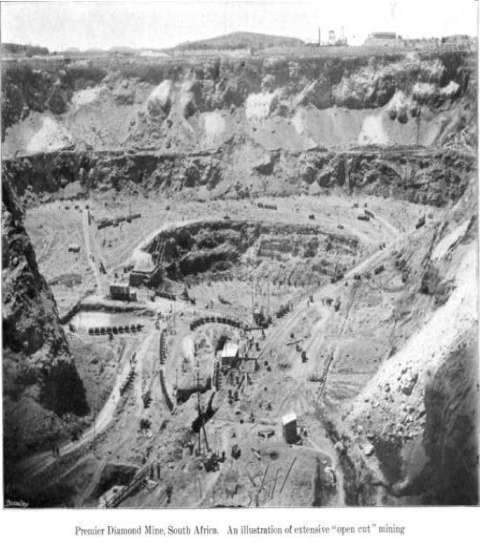 Extensive open-pit mining at the Premier Diamond Mines circa 1918

The present day source of blue diamonds are the Premier/Cullinan/Petra Diamond mines of Transvaal, South Africa

The Indian deposits of diamonds including the blue diamonds are now completely exhausted, and the present day source of blue diamonds is mainly the Premier diamond mines in Transvaal, South Africa. The Blue Magic diamond, being a 20th century diamond, also seems to have originated in these mines. The eleven extremely rare blue diamonds that formed part of the De Beers Limited Edition Millennium Diamonds Collection, exhibited at the Millennium Dome throughout the year 2000, were all sourced from the Premier diamond mines in South Africa. 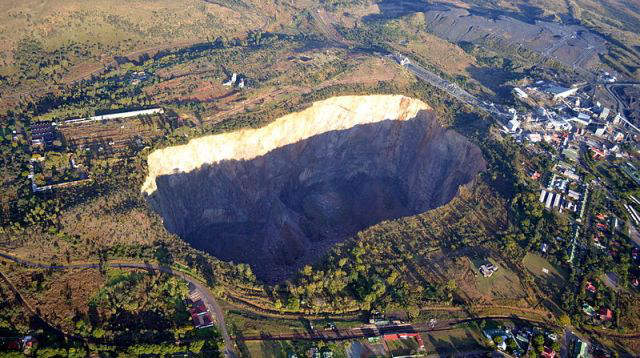 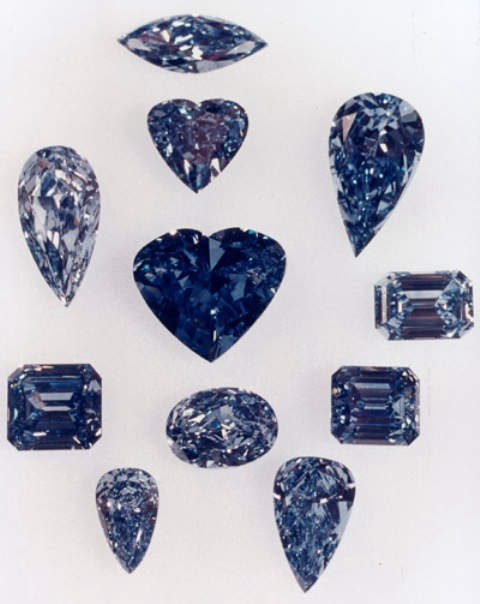 The occurrence of blue diamonds is much less than 0.1%

The occurrence of blue diamonds is said to be extremely rare, but if this statement is to be quantified a statistical analysis of the production of blue diamonds in the Premier mines becomes necessary. It is said that only one significant blue diamond is produced per year out of all the Premier diamond mines rough diamond production for an year. This will be much less than 0.1 %. If for example a 10 carat blue diamond was produced in an year when the total production was approximately one million carats, the percentage production works out to 0.001%. For pink diamonds the percentage production is even lower than that for blue diamonds. In the Argyle mines in Western Australia, only a single carat of pink diamond is produced for every one million carats of rough diamonds. This works out to an astonishingly low percentage of 0.0001 % !!!

The best blue diamonds surpass all other gems for their sheer beauty. It is a combination of color, brilliance and rarity that makes blue diamonds so special. Blue diamonds are greatly admired and eagerly sought after by collectors and connoisseurs of diamonds. As such there is little wonder that a rare blue diamond weighing only 6.04 carats (Diamond No. 34 in the above table) is reported to have broken the 20-year old world record for price per carat, held by the "Hancock Red" diamond. The record-breaking sale took place at a Sotheby's auction in Hong Kong, held on Monday, October 8th, 2007. The internally flawless, fancy vivid blue diamond, belonging to a private Asian collector fetched a price of US$ 7.98 million at the auction, which works out to a record-breaking price of US$ 1.32 million per carat. The diamond was purchased by Moussaieff Jewelers of London. The previous record held by the "Hancock Red" diamond was U. S. $ 926,000 per carat, and was purchased by the agents of the Sultan of Brunei, at a Sotheby's auction held in 1987. The Hancock Red actually had a weight of only 0.95 carats, and sold for U.S. $ 880,000. This works out to a price of U.S.$ 926,000. 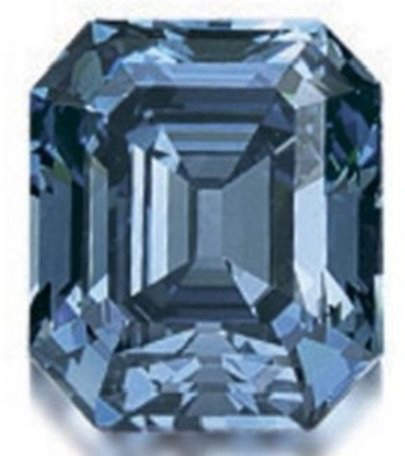 6.04-carat, fancy vivid blue diamond sold at Sotheby's Hong Kong in October 2007 for US$ 7.98 million sets a record-breaking price-per-carat of US$ 1.32 million

3) Golkonda - From Wikipedia, the free encyclopedia

4) Premier Mine - From Wikipedia, the free encyclopedia