The Conde Pink Diamond also known as the Conde Diamond or Le Grand Conde gets its name from Louis II de Bourbon, the Prince of Conde, and the Commander of the French Army, who was presented the diamond as a token of appreciation by King Louis XIII of France in 1643, for the several successful military victories that were achieved on his behalf. 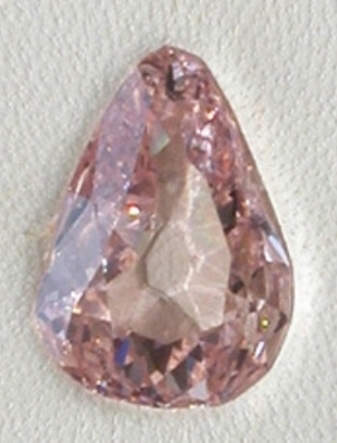 The Conde Pink diamond is a light pink, pear-shaped diamond weighing 9.01 carats. The clarity of the diamond is not known, but without any doubt must be exceptional, given the origin of the stone from the historic Kollur mines of Southern India.

The diamond is a plastically deformed Type IIa diamond

The diamond is most probably a Type IIa diamond, which are nitrogen free, and free of all chemical impurities. However, the pink color is caused by the structural distortion of the crystals, due to the twisting and bending of the tetrahedral crystal units as the diamonds rose up from the earth's mantel to the surface. The distorted areas in the crystal changes the absorption spectrum of the diamond, causing the pink color. Thus the Conde Pink diamond is a plastically deformed Type IIa diamond. 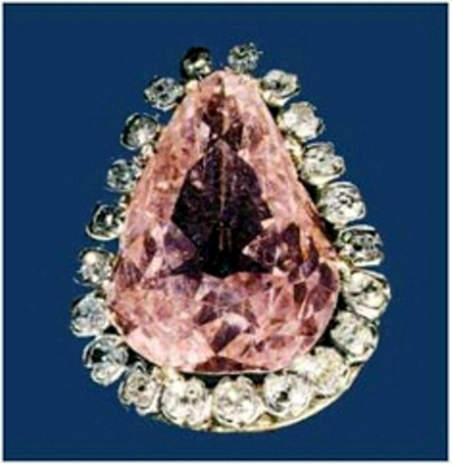 Though the Conde Pink Diamond occupies only the 20th position in the List of Famous Pink Diamonds as at year 2011, yet its historic significance surpasses most other diamonds in the list

In the list of Famous Pink Diamonds as at year 2011, the Conde Pink Diamond occupies the 20th position, being only 9.01 carats in weight, but in terms of historical significance the diamond surpasses most other pink diamonds, as it has a history dating back to the mid-17th century.

The Conde Pink diamond originated in the famous Kollur mines, near Golconda in Southern India

The Conde Pink diamond being a mid-17th century diamond, most probably originated in the famous Kollur mines, near Golconda, in Andhra Pradesh in Southern India, the only source of pink diamonds in the world during this period. The Darya-i-Nur, the Nur-ul-Ain, Shah Jahaan and Agra are the other famous pink diamonds that are believed to have originated in the same mines. 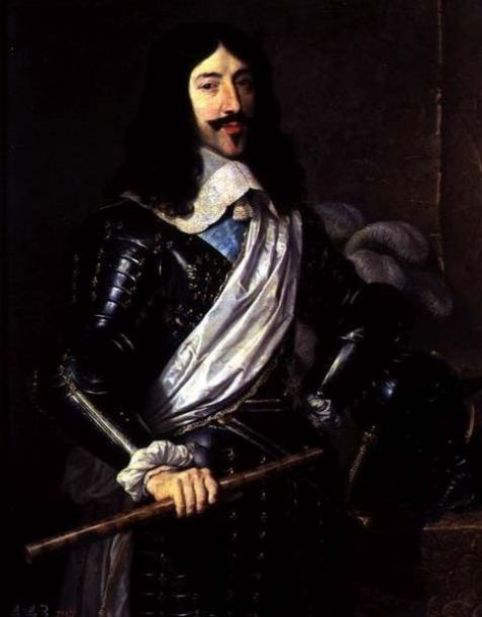 The possible period during which the Conde Pink diamond entered the French court? 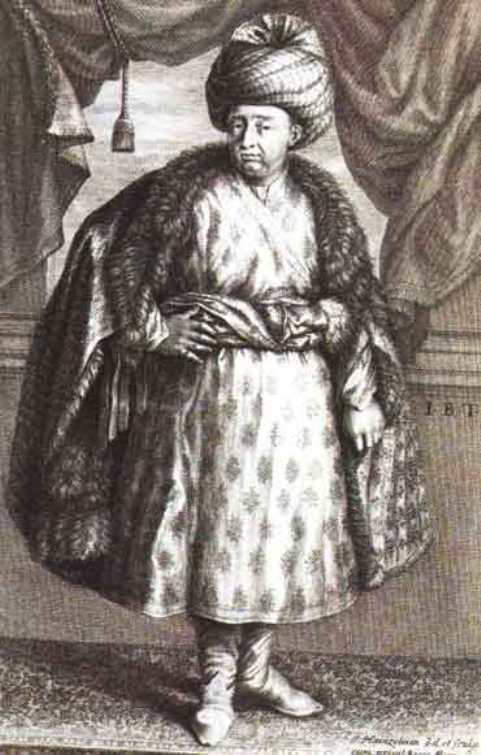 Who gifted the Conde Pink diamond to Louis II de Bourbon, the Prince of Conde? Was it King Louis XIII or King Louis XIV?

Chronology of events during early 17th-century favors King Louis XIV, the successor to King Louis XIII as the French monarch who gifted the Pink diamond to the Prince of Conde

The Conde Pink diamond, also known as the Conde diamond or the Grand Conde diamond (Le Grande Conde), was purported to have been presented to Louis II de Bourbon, the Prince of Conde, and the Commander of the French Army, as a token of appreciation for several successive military victories associated with the 30-year war. But, the chronology of events during this period do not seem to support this contention, but instead favors King Louis XIV, the successor of King Louis XIII as the French Monarch who made this gesture of appreciation.

His birth, education and presentation to King Louis XIII in 1636 at the age of 15 years

Louis II de Bourbon, the Great Conde previously known as Duc d' Enghien was born in 8th September 1621 in Paris, to parents who descended from the House of Bourbon. He was the eldest son of Henry II de Bourbon. the 3rd Prince of Conde. Having completed his education at the age of 15 years, studying under the Jesuit priests for six years, and later studying mathematics and horsemanship at the Royal Academy at Paris, he was presented to King Louis XIII, by his father, in January 1636.

His first great victory as Head of the Royal Army against the Spaniards at Rocroi on May 19, 1643, the greatest French victory for a century, which King Louis XIII did not to see, as he died on May 14, 1643

Other victories that followed the success at Rocroi

The victory at Rocroi was followed by other successes, in the area of the Rhine, at Thionville and Sierck, at Freiburg, Philippsburg, Mainz, and Nordlingen. He also conducted a brilliant campaign in Flanders. 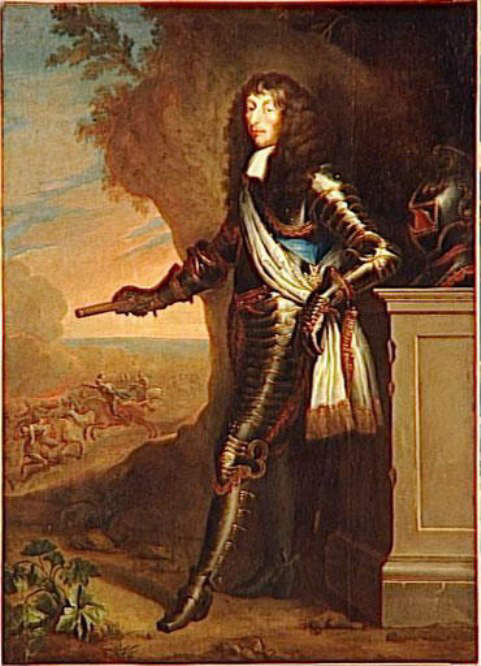 Portrait of Louis II de Bourbon - the Prince of Conde

King Louis XIII was succeeded by his son Louis XIV, who was barely 5 years old at the time. The Queen mother acted as Regent until the King came of age. Louis XIV was just 9 years old, when the nobles and the parliament rose against the Crown in 1648, due to the unpopularity of the Prime Minister  Cardinal Jules Mazarin. During the period of instability, that was associated with the long civil war that followed, known as the Fronde, Conde was imprisoned by Jules Mazarin and released after 13 months by his friends who launched the second war of the Fronde, which led to Mazarin's voluntary exile.

Conde eventually defected to the enemies, the Spaniards, who appointed him as Generalissimo. He conducted several campaigns against the French army for 4 years, but was finally defeated at the Battle of Dunes on June 14, 1658.

His return to Paris in 1660 after the signing of the Peace of Pyrennes in 1659. The Prince is given a warm welcome by King Louis XIV

Conde returned to Paris, after the Peace of the Pyrennes was signed in 1659, and was received by King Louis XIV, on January 27, 1660. Since then he became a loyal and humble subject of the King. 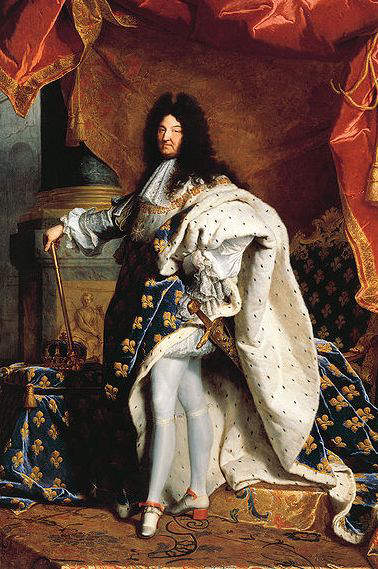 Re-appointment as the Commander of the French army in 1668, and his brilliant military successes until 1675

Eventually in 1668, Conde was again appointed the Commander of the Army, that attacked the Spanish-held Franche-Comte, and Conde took Artois, Besancon, Dole, and Gray in 15 days. His brilliant military successes continued until 1675. Most of the military successes achieved by King Louis XIV, between 1660 and 1675, could be attributed to the Great Conde's successes as a brilliant military commander. Thus in all probability it was King Louis XIV, who presented the Conde Pink diamond to the Grand Conde. After his last campaign in 1675, Conde returned to Chateau de Chantilly, where he spent the remaining 11 years of his life in retirement, and died on November 11, 1686 at the age of 65.

Louis II de Bourbon, the Great Conde, had the diamond mounted on the pommel of his walking stick. The diamond remained the property of the Conde family until 1892, when Duc d' Aumale bequeathed it to the French Government. Today it is on display in the Musee de Conde in Chantilly, in France, where it will continue to remain according to the Duke's will. The diamond was stolen from the museum on October 11th, 1926, but later recovered and restored. However, as a security precaution, the diamond that is on display now, is not the original diamond, but only a perfect replica of the original. 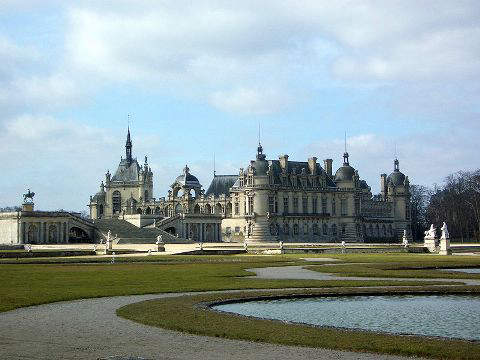 The Chateau de Chantilly website gives an interesting account in French of how the Pink Diamond was stolen in 1926, with the weapons of Abd el-Kader, and was accidentally recovered by the maid of a small hotel, near the Eastern Railway Station in Paris, while crunching an apple found in the room of a customer. It appears that the Pink Diamond was hidden inside the apple by the thief, before it was smuggled out of Paris. The diamond was restored to the Musee de Conde with great pomp and pageantry.

It was stolen in 1926 with the weapons of Abd el-Kader and found a few months later through the extraordinary by the maid of a small hotel near the Gare de l'Est in Paris: in eating an apple found in the room of a client, she discovered the stone, which was then made with great fanfare at the Condé Museum.

2) Louis XIII of France - From Wikipedia, the free encuclopedia

3) Louis XIV of France - From Wikipedia, the free encyclopedia