The double-strand natural pearl necklace consisting of extraordinary pearls of the highest quality and beauty, is not only a signature piece of its probable designer, Cartier's, but also of its fashion conscious wearer Countess Mona von Bismarck, an American socialite and fashion icon, famed for her beauty and fashion sense, to whose sumptuous collection, the pearl necklace belonged, and from whom the necklace derived its name. Mona von Bismarck, who was declared the best-dressed woman in the world in 1933, by a syndicate of renowned fashion houses in Paris, built up a valuable collection of fine jewelry, designed by renowned jewelry houses in the United States and Europe, such as Cartier's and Tiffany's, and included the famous Bismarck Sapphire Necklace, incorporating the 98.6-carat cornflower-blue sapphire, she acquired when she visited Sri Lanka in 1926 during her round-the-world honeymoon cruise in her millionaire husband Harrison William's  yacht, the "Warrior." The Bismarck Sapphire Necklace is now part of the collection of jewels and jewelry of the National Museum of Natural History of the Smithsonian Institution, and is a prominent exhibit in the Janet Annenberg Hooker Hall of Geology, Gems and Minerals of the Institution.

Characteristics of the Pearl Necklace 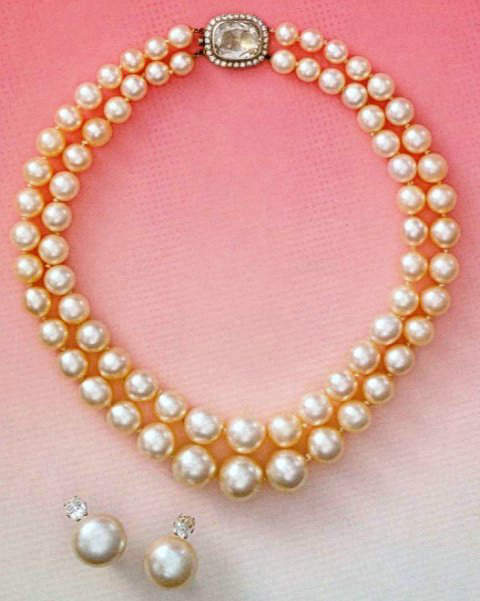 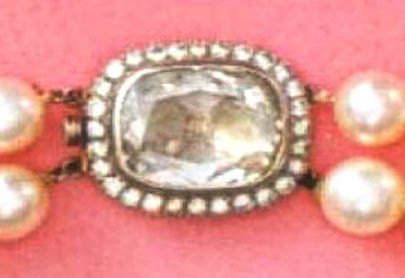 A close examination of the two strands show that the pearls are not all of the same shape, but vary from spherical, to near-spherical, button and oval shapes. Some of the pearls especially the larger ones look like they are semi-baroque. The fact that the pearls in the necklace have a variety of shapes and sizes, possibly authenticates its natural provenance. The color of the pearls are white, with a silvery overtone. The luster and orient of the pearls are characteristic of natural saltwater pearls, associated with their thick nacre. The surface quality of the pearls appear to be excellent. A pair of identical almost spherical pearls form the centerpiece of the ear studs, that are shown on the bottom left-hand  corner of the photograph, and are complementary pieces to the necklace.

History of the Pearl Necklace

Source of the pearls in the necklace 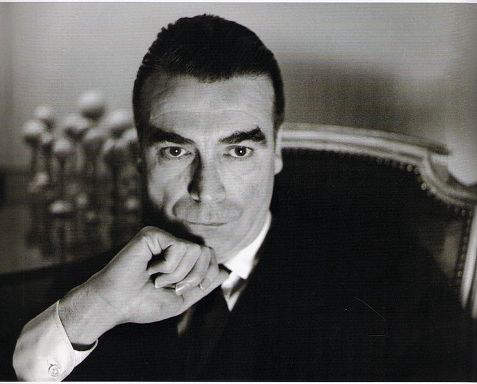 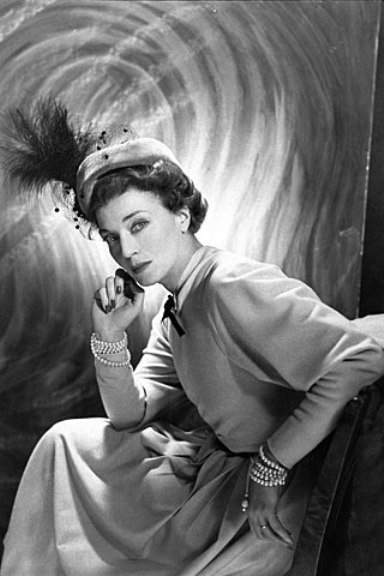 On one occasion Monsieur de Givenchy was reported to have made the following comments about his favorite client Countess Mona von Bismarck, " She was splendid as could be seen in the portrait that Dali had painted of her, and had seduced five husbands. She was mad about pearls and brought them in kilos during cruises in the China Sea and the ports of Japan. She had two lifts of different speeds installed in her apartment in Ave de New York; the faster one was for the domestics so that they could reach the landing before her to open the door."

According to the above account, Countess Mona von Bismarck had ample quantities of pearls with her, which she had purchased during her round-the-world honeymoon cruise in 1926, with her third husband, millionaire Harrison Williams, in his own yacht, the "Warrior." In all probability the pearls were purchased in the ports of Southern China and Japan, and were natural South Sea pearls, harvested from the silver-lipped pearl oyster, Pinctada maxima, occurring naturally in the  pearl beds of the South China Sea. Around this time Japan had just perfected the technique of culturing Akoya pearls, but commercial quantities of cultured pearls were yet to appear in the market.

The multitude of shapes, sizes varying from 7.7 to 15 mm, and the color of the pearls in the necklace, seem to confirm the opinion that the pearls are natural South Sea pearls. South Sea pearls are the largest natural or cultured pearls that can be produced, varying in size from around 7 to 20 mm, with an average size of 13 mm. They can have colors such as white, silver, silver-pink and silver-white. Round and near-round shaped pearls are very rare. The common shape is baroque. Other shapes such a button, oval and drop are also found. The silver-lipped pearl oyster that produces South Sea Pearls, Pinctada maxima, is one of the largest saltwater pearl oysters known, that can attain a maximum diameter of 12 ins (30 cm). The larger gonad in the oyster helps the growth of a larger pearl whether naturally or cultured.

How she acquired the name Bismarck ?

A woman of extraordinary beauty, Mona von Bismarck, born as Mona Travis Strader in Louisville, Kentucky in 1897, acquired her more famous second name from her fourth husband, Count Albrecht von Bismarck-Schonhausen, the grandson of the former German Chancellor Otto von Bismarck, whom she married in 1954. Being the wife of a count, she was addressed as Countess Mona von Bismarck. 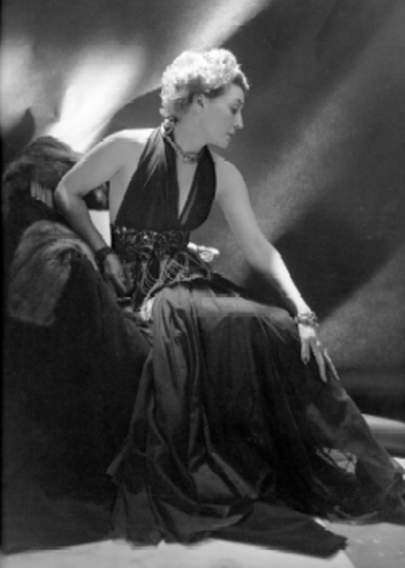 Mona's parents were separated when she was just 5 years old, in 1902, and she and her brother were brought up by their paternal grandmother in Lexington, Kentucky.

In 1917, at the age of 20 years, she married her first husband, Henry J. Schlesinger, who was 18 years senior to her, and who owned the farm where her father worked. The marriage lasted only 3 years and was dissolved in 1920. Mona gave the custody of her only son by this marriage, Robert Henry, to Schlesinger, in exchange for $500,000 at the time of the divorce.

The following year in 1921, she married her second husband, banker James Irving Bush, reputed to be the "most handsome man in America" but 14 years her senior. This marriage too was short-lived, and the couple divorced in Paris, in 1925.

Her third marriage to Harrison Williams

In 1926, long before her obsession with haute-couture, she opened a dress shop in New York, in partnership with her friend Laura Merriam Curtis, the daughter of William Rush Merriam. It was while in New York she caught the eye of one of the richest me

n in America, Harrison Williams, who was also known as "the utilities king of America." Williams who was a widower, 24 years her senior, was the owner of an estimated fortune of $600 million. Mona married Williams on July 2, 1926, and this marriage turned out to be the most successful of the five marriages she contracted.

Soon after the marriage, Williams took his young bride on a round-the-world honeymoon cruise on his own yacht, the "Warrior" which was reputed to be the largest and most expensive pleasure boat in the world at that time. Williams showered his wife with expensive gifts, whenever the couple disembarked at different ports of call, during their cruise. It is believed that it was during this voyage across the seas, that Williams purchased the "Bismarck Sapphire" for Mona, when they called at the Port of Colombo, in Sri Lanka, and later acquired large numbers of loose pearls as they chartered the South Sea, calling at the ports of Southern China and Japan.

The purchase of luxury mansions in the United States, Paris and Italy

After returning from the honeymoon, Williams invested heavily on a series of luxury residences in New York, Palm Beach, Paris and Italy. In New York, he purchased the Georgian style mansion at the corner of Fifth Avenue and 94th Street, designed by Delano and Aldrich in 1915. Mona engaged the services of Syrie Maugham for the decoration of the mansion. They also purchased an estate in Bayville, Long Island, known as Oak Point, situated along Bayville Avenue. The next mansion they purchased was on Worth Avenue, in Palm Beach. Among the overseas properties they purchased were, several apartments in Paris, and the famous Villa il Fortino overlooking Marina Grande, in the Italian island of Capri, which once belonged to Augustus Caesar, and later to Emperor Tiberius.

Her obsession for haute-couture which began during her life with Harrison Williams, was a direct result of the extravagant life style she led, with unlimited resources at her disposal. It was then that she established a working relationship with couturier Cristobal Balenciaga, that lasted for almost three decades. In the year 1933, Mona was declared "The Best Dressed Woman in the World" by a syndicate of renowned fashion houses of Paris, that included Chanel, Molyneux, Vionnet, Lelong and Lanvin. The same title was subsequently awarded to the Duchess of Windsor in 1934 and Elsie de Wolfe in 1935. Harrison Williams died in 1953. Mona's marriage to Harrison Williams was the most successful of all her marriages, and lasted 27 years.

Mona was now 56 years old, but looked much younger, and continued to play her role as trend setter in the world of fashion, in Paris. One year after Harrison William's death, she took her fourth husband, Count Albrecht von Bismarck, a longtime friend of the family, an interior decorator by profession and the Grandson of the former German Chancellor, Otto von Bismarck. The couple spent most of their time in Paris, and lived at an apartment in the prestigious Hotel Lambert, and later in a mansion at 34, Avenue de New York, and also at Villa il Fortino, in Capri. This marriage too proved to be a successful one and lasted for 16 years, until the death of Count Albrecht von Bismarck in 1970.

Mona was now 73 years, and probably wished to remain single for the rest of her life. However, another man had been longing to enter her life in her twilight years. This was none other than Albrecht von Bismarck's personal physician, Dr. Umberto de Martini, who was 14 years her junior, and the only husband she married, junior in age to her. In 1979, Martini died in a car accident, and it was only after his death she realized that Martini had in fact married her only for her money and position.

In 1967, Mona von Bismarck donated the sapphire and diamond  pendant necklace that incorporated the 98.6-carat cornflower blue Sri Lankan sapphire, to the National Museum of Natural History of the Smithsonian Institution, and the Institution named the necklace "Bismarck Sapphire Necklace" in her honor. She bequeathed her estate that included her valuable collection of jewels and jewelry, to a foundation that was to be established after her death. Countess Mona von Bismarck died in 1983 in Paris. Her body was flown to the United States, where she was interred in Long Island, by the graveyards of her former husbands, Harrison Williams and Albrecht von Bismarck. 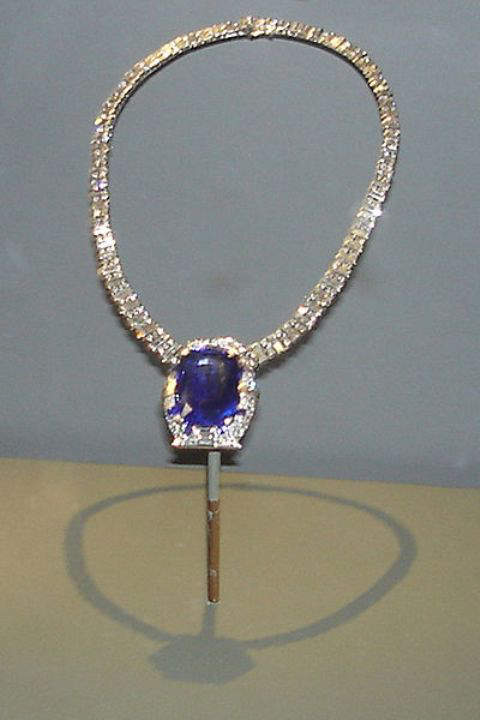 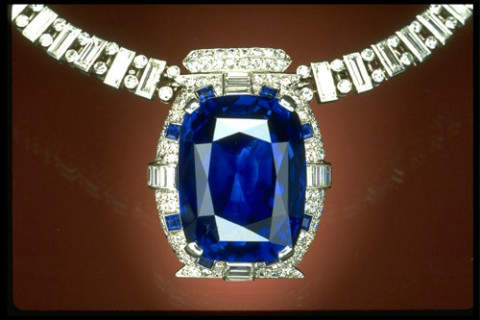 Sale of the Mona von Bismarck two-strand pearl necklace at Sotheby's Geneva, in 1986.

In May 1986, the part of her estate that included her valuable jewels and jewelry came up for auctions at Sotheby's in Geneva, and included the Mona von Bismarck two-strand pearl necklace. A pre-sale estimate of $139,000 to $195,000 was placed on the necklace. However, the necklace surpassed the expectations of the auctioneers, selling for more than double the upper estimate at $410,000. In accordance with her wishes, her estate was used for the establishment of the Mona Bismarck Foundation. The foundation which was registered in the State of New York, has a Paris Cultural Center, and an exhibition space located opposite the Eiffel Tower. The Foundation, while promoting artistic, scientific, literary and educational activities, had also organized over 70 international exhibitions, over the last twenty years, that were open to the public free of charge.

The enhanced price realized for the Mona von Bismarck two-strand pearl necklace in May 1986, represented the beginning of a trend towards the end of the 20th-century, during which a strong auction market for natural pearls was registered, where the final prices realized far exceeded the pre-sale estimates. The trend continues into the early 21st-century, reaching a climax in the year 2011, when the 203.84-grain La Peregrina pearl, one of Elizabeth Taylor's most iconic jewels, presented to her as Valentine day gift by Richard Burton in 1969, and purchased for only USD 37,000 sold for a record-breaking sum of USD 11 million, at a Christie's New York auction held on December 13, 2011. See table below.

Table of some famous natural pearls/pearl jewelry sold at public auctions conducted by international auction houses, giving the date of auction and the prices realized, during the period 1970 to 2009