Out of the nearly 200 pieces of jewelry in the Princess Margaret's collection, 15 pieces incorporated cultured pearls in them. This webpage is dedicated to three such pieces, two of which were designed by the renowned British Jewelry designer John Donald, who revolutionized British jewelry design in the 1960s, by introducing new techniques in jewel crafting. The third piece is a South Sea pearl necklace made up of 40 South Sea pearls and 55 cm long.

1) A Pair of Cultured Pearl and Diamond Earclips, by John Donald - Lot No. 47

The theme adopted by John Donald for the earclips is a naturalistic theme. Each earclip is designed as a cluster of foliate sprigs, consisting of seven fruits represented by white spherical cultured pearls, surrounded by foliage or floral leaves, made of 18-carat yellow gold. Each pearl is surrounded by four or five yellow gold leaves. The cluster is made of one central pearl surrounded by six other pearls, in which a larger and smaller pearl are placed alternately. The composite structure is such that some of the yellow gold leaves form an almost star-like pattern. Within this star-shaped pattern, five round brilliant-cut diamonds appear to be placed at the tip of five yellow gold leaves. The pearls appear to be set on wires, but the diamonds with the usual claw setting. The tip of the yellow gold leaves appear to have been subjected to "nugget treatment"  by melting and piercing by hand. The piece has been hallmarked for  18-carat gold, guaranteeing the quality of precious metal. The year 1972, indicates the year of manufacture. The pair of earclips is accompanied by its original brown suede John Donald case, signed JAD for John Donald. 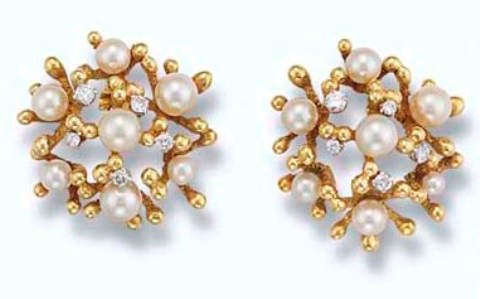 A Pair of Cultured Pearl and Diamond Earclips by John Donald

The probable source of the pearls

H.R.H. Princess Margaret, and H.M. Queen Elizabeth, The Queen Mother, purchased jewelry items designed by John Donald in the 1960s and 1970s, after he was introduced to them by Sir Anthony Armstrong Jones, 1st Earl of Snowdon. The above pair of cultured pearl and diamond earclips was designed and manufactured and probably purchased in 1972. Considering the year of manufacture, the source of the cultured pearls was most probably Japan, and the pearls are in fact cultured Akoya pearls. In the 1960s Japan was the only country in the world producing cultured pearls. The culturing of South Sea pearls in Australia, was at an experimental stage in the 1960s and was firmly established only in the mid-1970s. The features of the pearls, such as the silvery-white color, the uniform spherical shapes, and smaller size of the pearls, seem to be in conformity with features of Akoya pearls produced in Japan.

Sale of the pair of Earclips

The Pair of Cultured Pearl and Diamond Earclips, by John Donald, was Lot No. 47, at the Christie's London auctions of Princess Margaret's Jewelry and Faberge Collection, that was held on June 13, 2006. A pre-sale estimate of £1,500 to £2,000 was placed on the lot, but in keeping with the enhanced trend shown at the auctions, undoubtedly attributed to royal provenance and the popularity of the Princess, the lot sold for £15,600 ($28,704), almost 8 times, the upper pre-sale estimate.

2) A Cultured Pearl and Diamond Ring, by John Donald - Lot No.49

Features of the Ring

The ring which has a  ring size M, equivalent to USA size 6, with a diameter of 16.51 mm and circumference of 51.5 mm, has as its centerpiece a large, near-spherical, silver-white cultured pearl, partially bordered by round brilliant-cut diamonds, at three areas. The first area has 6 diamonds arranged in a row, the second area 5 diamonds and the third area 4 diamonds. The gaps between these diamond set areas are occupied by textured nugget flakes of gold, an innovative design first introduced by John Donald in the 1960s. The ring was designed in the 1970s, and was accompanied by the original green leather John Donald case. 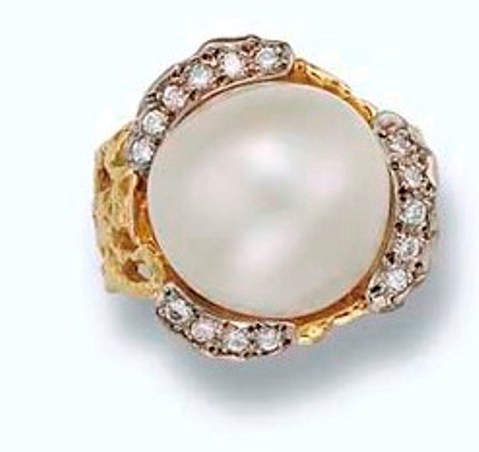 The probable source of the cultured pearl

The sale of the Cultured Pearl and Diamond Ring

The Cultured Pearl and Diamond Ring, by John Donald was Lot No.49 at the Christie's London sale of H.R.H. Princess Margaret's jewelry and Faberge collection, put up for auction by her two children, in order to pay up the 40% death duty imposed on her estate, which amounted to around £3 million. The sale that took place on June 13, 2006 had an enormous worldwide response, and created records unprecedented in the history of jewelry auctions, some pieces recording prices over 100 times the pre-sale estimates. The two-day sale that also included sale of artwork, silver, furniture etc. on the second day, netted a total of £13.6 million, nearly £10 million more than the pre-sale total estimate of around £3 million, the same amount owed as tax.

John Donald revolutionized British jewelry design in the 1960s, and his designs were described as "Baroque in mood and organic in form."

John Donald,  is an innovative jewelry designer of the 1960s, who is credited with revolutionizing traditional British jewelry design, and introducing new techniques in designing, such as experimenting with molten gold in water, creating a variety of fascinating shapes to work with, and the "nugget effect" a melting and piercing treatment of silver and gold, producing an effect that reflected the natural form in which they are found. Gold and silver exist naturally as nuggets, and creating the texture of these nuggets was known as the "nugget effect." John Donald was also a pioneer in using natural crystals, including precious stones, in their rough and uncut forms, in settings of gold together with pearls, cut and polished diamonds and other gemstones. Eg. the John Donald Brooch, with jade, pearls and diamonds set in yellow gold that was designed in 1970. His designs have been described as Baroque in mood and essentially organic in form. His famous "crown" design was a innovative jewelry concept, in which stones were set on very fine wires, all at different levels, within the textured gold work of the crown.

In the 1960s John Donald's work as a jewelry designer received a major boost, when his innovative creations were granted royal patronage, by H.R.H. the Princess Margaret and H.M. Queen Elizabeth, the Queen Mother,  who purchased works by John Donald, after he was introduced to them, by Antony Armstrong Jones, the 1st Earl of Snowdon. John Donald's original creations, combining meticulously handcrafted gold work and unusual gemstones, have received wide acclaim, and his masterpieces are featured in renowned museums, such as the Victoria & Albert Museum, London, the Royal Museum of Scotland, Edinburgh and the Pforzheim Museum in Germany, as well as at the Hall of The Worshipful Company of Goldsmiths.

Features of the Necklace

The size of the pearls in the neckace

The shape of the pearls in the necklace appear to be a combination of spherical and near-spherical pearls. Perfectly round cultured South Sea pearls are not only rare  but also the most sought after and  expensive. Near-round, button, drop, oval, pear, baroque and ringed shapes are more common. Unpredictable weather conditions during culturing, and lying of the oyster on one side for a long time, lead to uneven deposition of nacre, and formation of shapes other than  perfectly round. After taking measures to minimize the effects of weather conditions, and turning over of the oysters at regular intervals, the shape of the pearls can be improved, yet semi-round or near-round pearls are still more common than perfectly round pearls. Thus most of the South Sea pearl necklaces, are mixed with round and semi-round pearls. A South Sea pearl necklace made up of only perfectly round pearls is extremely rare and considered to be an investment grade necklace. 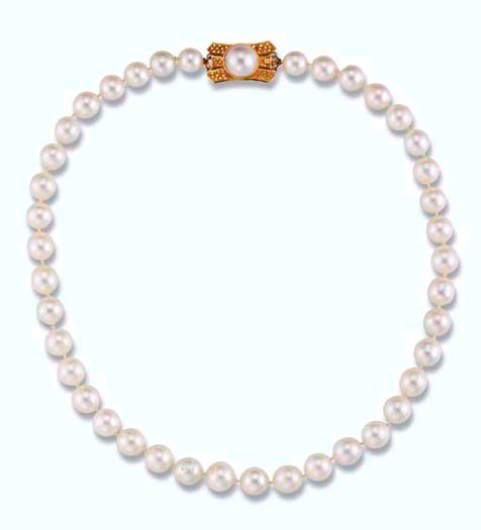 The color, overtone, luster and orient  of the pearls in the necklace

The color of the pearls in the necklace is silvery-white, in which white is the body color of the pearl, and silver the overtone color. The white body color is caused by the lack of pigments associated with the conchiolin part of nacre, that makes it transparent, allowing the white color of aragonite to show through. The silver overtone is caused by refraction as light passes through successive layers of aragonite and conchiolin. The color, overtone, luster and orient of pearls are all dependant on the thickness of nacre, which is maximum in South Sea pearls, and can be as high as 2 to 6 mm. Luster, caused by the reflection of light from the surface and just below the surface of nacre, is deep, satin-like, rich and luxurious, a characteristic feature of South Sea pearls, that sets them apart from other cultured pearls. Orient or iridescence, also caused by refraction and dependant on the thickness of nacre, is maximum for South Sea pearls.

The South Sea Cultured Pearl Necklace was Lot No.58, at the London Christie's Auction of Princess Margaret's jewelry and Faberge collection, held on June 13, 2006. A pre-sale estimate of £800 - £1,200, was placed on the necklace. However, in keeping with the unprecedented demand shown by bidders for anything associated with the popular princess, the South Sea cultured pearl necklace, recorded an enhanced price of £24,000, 20 times higher than the upper pre-sale estimate.

7) Revolutionary jewelry to go under hammer at Bonhams, London on 13 September 2006. www.bonhams.com