Princess Margaret's collection of jewelry and Faberge, consisting of around 200 pieces, was an extraordinarily rich and varied collection, that included a variety of styles and designs, belonging to the Georgian, Victorian, Belle Ã‰poque, Art Deco, Retro and Contemporary periods, and incorporating a variety of precious stones, such as diamonds, pearls, rubies, sapphires, and emeralds, and semi-precious stones, like garnets, amethysts, aquamarines, zircon etc. The collection spans every stage of her life, from infanthood, to childhood, adolescence, young adult, middle age and finally old age, ending with a piece, a ruby and diamond ring, created  just a few years before her death in 2002, with her own personal input into its designing.

The collection includes pieces which she inherited as a member of the British royal family, and sister of the reigning Monarch, Her Majesty Queen Elizabeth II. It also included several pieces which she received as gifts, from her close relatives, such as her grandmother, Queen Mary, her mother, Queen Elizabeth Bowes-Lyon and her father, King George VI. Most of the pieces were acquired by the Princess herself in the 1960s and 1970s, and were unique creations from the workshops of famous British "craftsmen jewelers"  such as Andrew Grima and John Donald. Most of these creations involved her own personal input, and reflects not only her love of natural history and horticulture, but also her love of the Arts in general, being a dedicated patron of the arts, music and ballet, and a gifted pianist, singer and mimic. Some of the naturalistic themes incorporated in her jewelry are plant motifs, such as fern leaf, cedar leaf, maple leaf, lichen etc and animal motifs such as the bee, butterfly, dog, frog etc.

Among her jewelry collection there are at least 25 pieces incorporating pearls, both natural and cultured. The most important and historically significant piece in the pearl jewelry collection is the five-row Art Deco pearl and diamond necklace, a gift from her grandmother Queen Mary, on the occasion of her 18th birthday in 1948, which subsequently became closely associated with the princess, and had been pictured wearing them in many famous portraits, including her sittings for Baron and Cecil Beaton, for her 19th, 20th and 21st birthdays. Please click here for a separate webpage dedicated to the Princess Margaret's Five Row Art Deco Pearl and Diamond Necklace.

Cultured pearl jewelry in the collection

12) A Pair of Cultured Pearl, Turquoise and Diamond Earclips - Lot 106

The Ruby, Cultured Pearl and Diamond Necklace, which was Lot No.1 at the auctions, and set the tone for the entire auction that followed, was a piece of jewelry with sentimental value, as it was worn by the princess as an infant on her second birthday. The necklace designed approximately in the year 1930, is 43.8 cm long, and consists of a row of graduated cultured pearls, with ruby bead spacers. Ruby beads alternate with the pearls throughout the length of the necklace, except at the two ends, where beads are placed after every pair of pearl, up to the extent of seven pairs. Altogether, there are 31 single pearls and 14 pairs of pearls, giving a total of 31 + 28 = 59 pearls. The total number ruby spacers are 44. The diamond plaque clasp at the ends, have several tiny single-cut diamonds mounted on it. 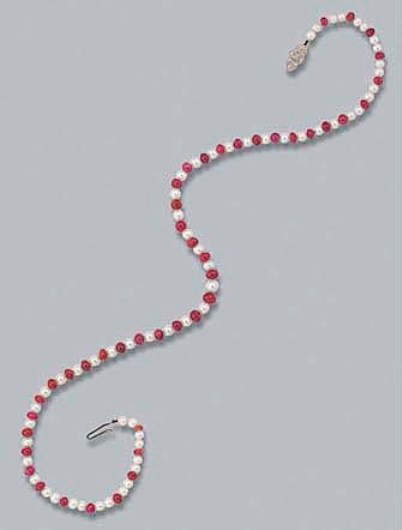 The cultured pearls in this necklace are undoubtedly Akoya pearls from Japan, as the culturing of pearls around the time the necklace was designed in 1930, was only perfected by Mikimoto in Japan. The uniform white color and spherical shape of the pearls, and the smaller size of the pearls, all conform to the properties of cultured Akoya pearls produced by the Japanese. Akoya pearls are generally white or cream colored, with overtone colors of silver, rose or cream. The pearls in this necklace are white and appear to have a silver overtone. Akoya cultured pearls are consistently round or near-round pearls, and are ideal for matching to be used in necklaces and bracelets. The pearls in this necklace appear to be mostly spherical and near-spherical in shape. The Akoya oyster, Pinctada fucata martensii, is the smallest pearl producing oyster used in pearl culture, and the pearls produced by them also tend to be small, varying in size from around 2 to 11 mm. The size of the pearls in this necklace appear to be somewhat larger in the center, and smaller towards the two ends. Their size appear to be just above the size of seed pearls, and cannot be more than 2-3 mm in size.

The necklace was around 76 years old at the time of the auction, and the cultured pearls in it appears to have maintained their luster and orient.

At the time of the Christie's auctions held in 2006, this necklace was around 76 years old, and despite its age, appeared to retain the color, overtones, orient and luster, all features dependant on the thickness of the nacre on these cultured pearls. Most Akoya cultured pearls have a nacre thickness of less than 0.5 mm. It is not known how long the luster, orient, color and overtones can last in an Akoya pearl with only a nacre thickness of less than 0.5 mm. In this necklace of course such characteristics appear to have lasted for the last 76 years, but it is not known for how many years longer, the pearls would be able to maintain these characteristics, given the low thickness of the nacre. For natural pearls of course it is on record that the luster and brilliance of some pearls have lasted for hundreds of years, eg. La Peregrina (497 years), Mancini Pearls (over 400 years), Arco-valley pearl (over 1,000 years), Barbara Hutton/Marie Antoinette Pearl Necklace (over 400 years), Baroda Pearl Necklace (over 150 years), Emperor Akbar's Baroque Pearl (436 years, according to the date of origin inscribed on the bell cap of pearl), The Gogibus Pearl (390 years), La Regente Pearl (199 years).

Ruby, Cultured Pearl and Diamond Necklace sets the tone for the unprecedented demand for jewelry items in the collection achieving a price 18 times higher than the upper pre-sale estimate

The Ruby, Cultured Pearl and Diamond Necklace was Lot No.1, at the Christie's London Sale of Princess Margaret's historic jewelry collection, held on June 13th, 2006. A pre-sale estimate of Â£1,200 to Â£1,500 was placed on the necklace. The bidding started at Â£500, but within 30 seconds rose to  Â£6,000, and at the time the hammer was brought down in favor of an anonymous bidder, had reached unprecedented Â£27,600, 18 times higher than the upper pre-sale estimate, setting the tone of the auction for all the items that followed. The demand varied from 1Â½ times the upper pre-sale estimate, as in the case of the Enameled Silver Faberge Clock, which sold for Â£1,240,000, 1Â½ times the upper estimate of Â£800,000, becoming the top selling lot, to over 100 times, as in the case of the simple cultured pearl jabot pin, which sold for Â£6,000, 100 times higher than the pre-sale estimate of  Â£60. Thus lower priced items showed a higher multifold increase in prices, than highly priced items, which showed a lower multifold increase in prices. This is obvious, because the number of bidders for lower priced items, who can afford to stake a claim, are higher than for highly priced items. The total amount realized at the auction was Â£9,597,680 which was three times higher than the pre-sale estimate of Â£2-3 million.

2) A Pair of Cultured Pearl And Diamond Earclips, By Birks - Lot 15

Characteristics of the earclips and the pearls mounted on it

The Pair of Cultured Pearl and Diamond Earclips by Birks, Canada, which was Lot No, 15 at the auctions, was an often worn, well treasured pair of earrings, which H.R.H. Princess Margaret acquired before the 1960s, during her first official visit to Canada, an extensive tour that lasted nearly a month. The earclips designed by expert craftsmen of Henry Birks & Sons, consist of a single cultured spherical pearl, surmounting a trefoil of brilliant-cut diamonds, probably set in platinum or white gold. The weight of the pearls and diamonds are not known. The cultured pearl in each of the earclips, perfectly match one another, in terms of shape, size, color, overtones, orient and luster.  The pearls are perfectly spherical in shape. The size of the pearls are not known, but appear to be around 8-10 mm in diameter. The color of the pearls are white, with probably a pinkish overtone. The orient and luster are in keeping with that of cultured saltwater pearls. The three diamonds in the trefoil are modern round brilliant-cut diamonds. 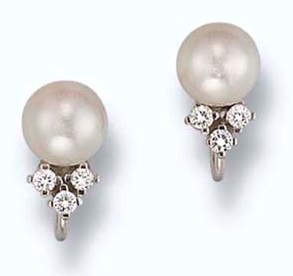 A Pair of Cultured Pearls and Diamond Earclips by Birks

The probable source of the cultured pearls on the earclips

Given the size, color and overtones of the pearls, the probable origin of the pearls can be either the Akoya pearl oyster, Pinctada fucata martensii or the South Sea pearl oyster, Pinctada maxima, and the source of the pearls could be either Japan or Australia. The Japanese cultured pearl industry was well established, beginning from the 1920s and 1930s. The cultured pearl industry in Australia, in the 1950s and 1960s, was still at an experimental stage, and was firmly established only in the 1970s, after painstaking research work undertaken by Nicholas Paspaley and his team of scientists. Thus, in all probability the cultured pearl in the pair of earclips are Akoya pearls that originated in Japan.

The Pair of Cultured Pearl and Diamond Earclips was designed by Henry Birks & Sons of Canada, the premier jewelry retailer in the country, founded by Henry Birks in 1879, when he opened his first jewelry store with a modest investment of 3,000 Canadian dollars, on Saint Jacques Street, in the heart of Montreal's commercial and financial district. The business prospered and by the turn of the century, the company's activities expanded rapidly, and a chain of jewelry stores were opened in all the major cities of Canada, becoming the country's main jewelry retailer. Since the founding of the company in 1879, several generations of the Birks family had been involved in the business. In 1993, Regaluxe Investment acquired Henry Birks & Sons. In 2002, Birk's acquire a controlling interest in Mayors Jewelry Inc., based in southeastern United States, that led to a merger in 2005 to form Birk's & Mayors Inc.

The sale of the Pair of Cultured Pearl and Diamond Earclips

Apart from the Pair of Cultured Pearl and Diamond Earclips, which the Princess acquired during her 1958 extensive official tour of Canada, the Princess also came to own two other pieces of jewelry, that were given to her as gifts, during her visit. During this one-month long visit, she attended the Centenary Celebrations of the province of British Columbia, and also took the opportunity to visit the famous Pioneer Gold Mines, situated in the province. Pioneer Gold Mine, with a history dating back to the 1850s gold rush along the Fraser River, is the most important mine in the lucrative Bridge River Mining District. During a production period that extended from the 1930s to 1971, the mine produced a total of 4 million ounces of gold, which was more than the production of any other mine in British Columbia. In honor of her visit to the mines, the Princess was presented with a rectangular shaped gold paperweight, having dimensions of 4.9 x 2.5 x 1.2 cm. and weight of 8.6 ounces, bearing the following inscription :-"From Pioneer Gold Mines of British Columbia July 25th, 1958." 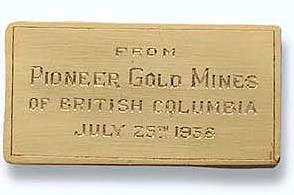 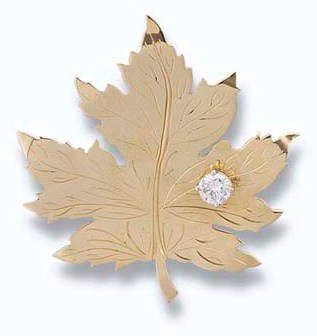 1) Property from the Collection of Her Royal Highness, The Princess Margaret, Countess of Snowdon. - Helen Molesworth. Press release by Christie's. www.christies.com