Out of about 25 pieces of pearl jewelry in Princess Margaret's Jewelry Collection, 15 pieces are incorporated with cultured pearls. This webpage is dedicated to 4 such pieces :-

1) A Pair of Cultured Pearl, Turquoise and Diamond Earclips -Lot 106

1) A Pair of Cultured Pearl, Turquoise and Diamond Earclips

Features of the Pair of Earclips

Each earclip designed as an openwork cluster in yellow gold, is set with cultured pearls, cabochon turquoises, old-cut diamonds and seed pearls. The center of circular motif is occupied by a large, spherical, white, cultured pearl, surrounded by a row of several small seed pearls. The next layer is a row of old-cut diamonds, consisting of around 10 such diamonds. The cabochon-cut turquoises form the outermost layer of the cluster. This layer consists of 20 rectangular-shaped cabochon-cut turquoises, interrupted at four points, lying along the vertical and horizontal diameter of the circle, at which 4 spherical, white, cultured pearls are placed, dividing the turquoise layer into 4 equal segments, consisting of 5 cabochon turquoises in each segment. Thus, there are 5 spherical, white, cultured pearls in each earclip of which the largest pearl, is the central pearl, and the four outermost pearls are smaller, but almost of equal size.

A Pair of Cultured Pearl, Turquoise and Diamond Earclips

The year of designing of the pair of Earclips is not known, but appears to be in the 1970s, going by the year of designing of the next piece of jewelry, that also contains turquoise and pearls. The cultured pearls are then most probably Akoya cultured pearls from Japan, especially if the piece was designed in the early 1970s. If it was designed in the late 1970s or in the 1980s, another possible source of the pearls would be Australia, where the culturing of pearls from the South Sea pearl oyster, Pinctada maxima was perfected and began entering the international pearl markets during this period.

The sale of the Pair of Cultured Pearl, Turquoise and Diamond Earclips

The Pair of Cultured Pearl, Turquoise and Diamond Earclips was Lot No. 106 at the Christie's London auction of H.R.H. Princess Margaret's jewelry and Faberge collection, that was held on June 13, 2006. A pre-sale estimate of Â£1,000 to Â£1,500 was placed on the lot. However, in keeping with the enhanced trend shown at the auction, the lot was sod for Â£9,000 ($16,560) six times the upper pre-sale estimate.

Features of the Cluster Ring

The center of the cluster is occupied by a large, spherical, white, cultured pearl, which is surrounded by 4 oval-shaped turquoise cabochons, and four groups of three seed pearls each, making a total of 12 seed pearls. The groups of three pearls are arranged along the vertical and horizontal diameter of the cluster, forming an arrangement similar to a Maltese Cross. The gaps between the triads of pearls are filled by the oval-shaped cabochon-cut turquoises, with their characteristics sky-blue color. The ring carries the London hallmark for 9-carat gold, and the year of hallmarking 1973, which is also most probably the year of designing the cluster ring. 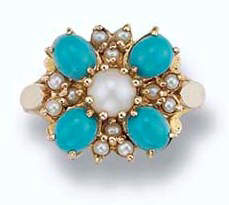 The source and features of the pearls

The central large cultured pearl, is perfectly spherical, and has a silvery-white color, and a luster and orient characteristic of cultured pearls. Given the year of designing of the ring as 1973, the most probable source of the cultured pearl is Japan, the main supplier of cultured Akoya pearls to the international pearl markets during this period. The 12 seed pearls incorporated in the cluster, seem to have similar characteristics, such as the spherical shape, size, color, luster and orient. All seed pearls appear to be white, and have a spherical or near-spherical shape. All seed pearls of course are natural, whether formed in the wild without any human intervention, or formed during pearl culturing, due to rejection of the bead nucleus by the seeded oyster, that instead forms several pearl sacs around fragmented foreign mantle tissue that is usually implanted with the bead, inside which keshi pearls develop. Keshi pearls are also a type of seed pearls, but are usually irregular or baroque in shape. It's only rarely that spherical or near-spherical keshi pearls are produced. Strictly speaking keshi pearls are natural pearls, as they are made entirely of nacre, and formed by the oyster rejecting the bead nucleus implanted by man, and instead taking control of the pearl producing mechanism to form several pearls, not intended by the pearl culturist. However, CIBJO still considers keshi pearls as non-beaded cultured pearls formed accidentally during the culturing process.

The sale of the Cultured Pearl and Turquoise Cluster Ring

A pre-sale estimate of Â£200 to Â£300 was placed on the Cultured Pearl and Turquoise Cluster Ring, which was Lot No.109, at Christie's London Sale 7335, in which nearly 200 pieces of jewelry and Faberge that once belonged to H.R.H. Princess Margaret came under the hammer. In keeping with the fierce bidding and unprecedented prices recorded at the auction, attributed to what was known as the "Princess' Premium"this modestly priced item, that would have become the proud possession of the most humble royal admirer, instead became the prized possession of a privileged anonymous owner, who had the means to cough up Â£8,400, twenty eight times the upper pre-sale estimate.

Features of the Cultured Pearl and Diamond Bracelet

The Art Deco Cultured Pearl and Diamond Bracelet, designed around the year 1925, is 17.8 cm long, and was among the jewelry gifted by H.R.H. Princess Margaret's grandmother H.M. Queen Mary, Queen Consort of King George V. The bracelet consists of a double row of cultured pearls bordering a millegrain-set line of 25 circular-cut diamonds in the center. There are 26 cultured pearls in each row. The smaller round-cut diamonds are placed in the space created between four adjacent pearls of the two rows. The pearls are spherical, white, cultured pearls. The metal used appear to be silver, platinum or white gold. The clasp is an openwork geometric shield-shaped clasp, set with tiny diamonds, and two large, spherical, white, cultured pearls, larger than the cultured pearls on the bracelet. 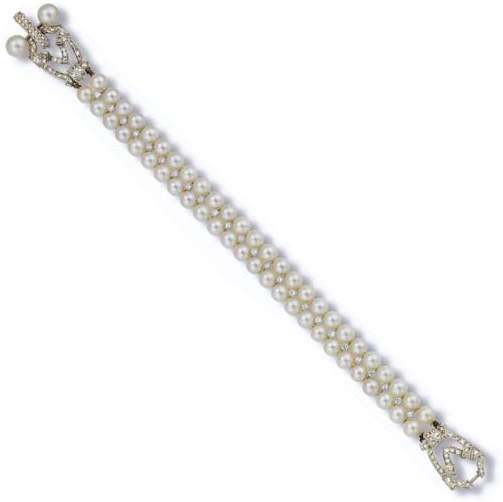 Source of the cultured pearls

The possible year of origin of the bracelet is around 1925, the Art Deco period during which geometric designs were popular. Around this period the only source of cultured pearls in the world was Japan, where the process of culturing Akoya pearls was perfected by Kokichi Mikimoto in the year 1916. Large numbers of pearl farms were opened in the coastal regions of Japan, and cultured pearls produced in those farms, began appearing in the pearl markets in the 1920s and 1930s. Thus, the cultured pearls on this bracelet are undoubtedly the first generation of cultured Akoya pearls produced in Japan during this period.

Sale of the Cultured Pearl and Diamond Bracelet

A pre-sale estimate of Â£3,000 to Â£4,000 was placed on this bracelet, higher than most other moderately priced jewelry items in the collection, possibly due to the diamonds incorporated on the bracelet, and the historical provenance associated with it, having originated during the reign of Queen Mary, the Queen consort of King George V. However, in keeping with the skyrocketing demand for the lots in the collection, the bracelet registered an enormously high price of Â£72,000 ($132,480), 18 times higher than the upper pre-sale estimate.

The features of the Spray Brooch 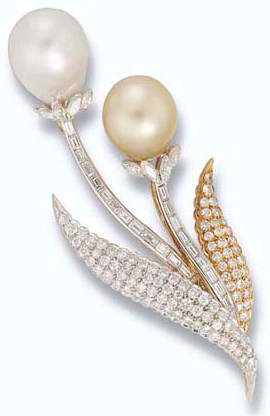 The source of the cultured pearls in the brooch

Given the fact that the brooch was designed around the year 1960, the source of the cultured pearls is undoubtedly Japan, the only source of cultured pearls in the world around this period. The pearls are then Akoya pearls, whose sizes range from 2 mm to 11 mm. The size of the pearls in this brooch are closer to the upper range or may be even slightly greater than that. However, given the larger size of the pearls, the culturing period or grow out period of the pearls have got to be greater than the period of average sized Akoya pearls.

The sale of the Cultured Pearl and Diamond Spray Brooch

The Cultured Pearl and Diamond Spray Brooch was Lot No.160, at the Christie's London Sale of H.R.H. Princess Margaret's jewelry and Faberge collection, held on June 13, 2006. A pre-sale estimate of Â£3,000 to Â£4,000 was placed on the brooch, which was significantly higher than most other pieces, because of the diamonds incorporated in it. However, in keeping with the unprecedented demand for the lots at this auction, the brooch realized a much enhanced price of Â£36,000 ($66,240), 9 times higher than the upper pre-sale estimate.