The "DeYoung Red" diamond gets its name from the onetime owner of the diamond Sidney DeYoung, a jeweler from Boston, who later donated the diamond to the National Museum of Natural History of the Smithsonian Institution, at Washington DC. 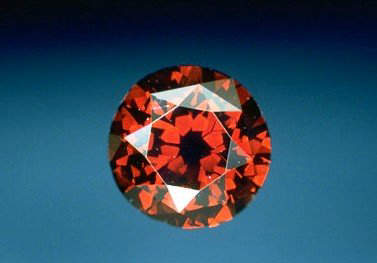 4Cs of the diamond

The DeYoung Red diamond, is a 5.03-carat, modified round brilliant-cut, fancy dark red diamond with a slightly brownish hue, giving it the appearance of a rhodolite garnet. In fact the stone was mistakenly sold as a red garnet at the beginning. The clarity grade of the diamond is VS2 - very slightly incuded, but inclusions still invisible without magnification. 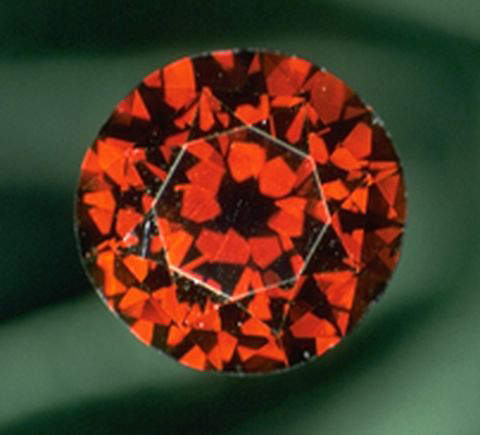 Another image of the DeYoung Red by Chip Clark

The DeYoung Red is a plastically deformed Type IIa diamond, whose occurrence is much less than 0.1% of all naturally occurring diamonds

Type IIa - Free of all impurities. In other words they are chemically pure diamonds. 1-2 % of natural diamonds belong to this group.

Type IIb - Contain trace amounts of another impurity, boron, which imparts a blue color to the diamonds. However only 0.1 % of natural diamonds belong to this group.

2) Structurally imperfect :- These are Type II diamonds, that are chemically pure, but have plastically deformed crystals. The crystals were plastically deformed following their formation in the earth's mantle, or during their ascent to the surface. The deformed areas in the crystal, change it's absorption spectrum causing the rare fancy colors such as red, pink, purple, orange and also brown colors. The occurrence of red, pink, and purple colors is much less than 0.1 % of all natural diamonds.

3) Naturally irradiated :- These are Type II diamonds, that have been exposed to natural radiation such as alpha, beta and gamma rays, over a long period of time, causing distortion in the crystal lattice that produces a green color. The occurrence of these diamonds are also very scarce and much less than 0.1 % of all natural diamonds.

How the DeYoung Red was acquired as part of an estate jewelry collection in which it was wrongly identified as a garnet, but subsequently identified to be a rare red diamond ?

The DeYoung Red diamond was in the possession of Sidney DeYoung, a jeweler from Boston for quite a long time. The stone had been acquired by his establishment as part of a collection of estate jewelry in which it was wrongly identified as a garnet. The item that included the stone had been labeled as a garnet hat pin. But one day, Sidney DeYoung happened to examine the garnet hat pin a little more closely. He noticed the so-called garnet just didn't look quite like a garnet. Moreover, he observed that for an old stone, it was remarkably clean and wasn't scratched up. This observation aroused his suspicions, and he took the stone for testing by a gem-testing laboratory. His suspicions were confirmed, and it turned out that the so called garnet was in fact not a garnet,  but a red diamond, the 3rd largest in the world. 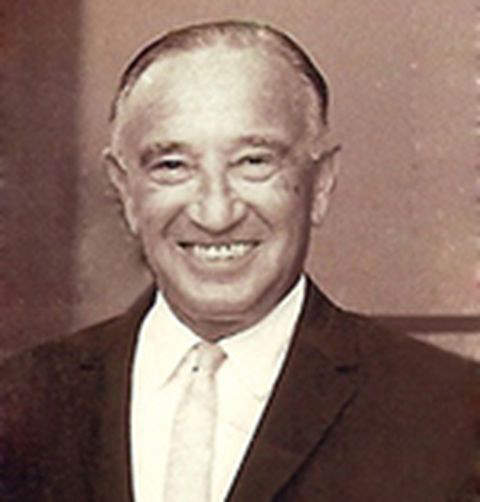 Sydney DeYoung, the third head of the J & SS DeYoung Inc. founded in 1835, diamond cutters and dealers in diamonds, natural pearls, colored gemstones and antique jewels, based in Boston, Massachusetts.

Sidney DeYoung donates the DeYoung Red diamond to the Smithsonian's National Museum of Natural History in 1987, to enrich the National Gem and Mineral Collection

Sidney DeYoung donated the rare 5.03-carat red diamond to the National Museum of Natural History of the Smithsonian Institution in 1987, to be added to the National Gem and Mineral Collection. He also donated a 2.86-carat fancy intense pink diamond that came from the Williamson mine in Tanzania, to the Institution. The two diamonds are exhibited side by side at the Natural History Museum.

The world's first largest red diamond is the Moussaieff Red, a 5.11-carat, trilliant-cut, fancy red, internally flawless diamond. In the rough state, this diamond weighed 13.90 carats, and was discovered by a farmer in Brazil in the mid-1990s. The rough diamond was acquired by the William Goldberg Diamond Corporation of New York, who transformed it into a spectacular triangular brilliant. The color of the diamond is a fine ruby-red, and was initially given the name "Red Shield", by the Goldberg Corporation. The diamond was later acquired by the Moussaieff jewelry firm, around the year 2001, for a rumored $ 8,000,000, and after this transaction the diamond acquired the name Moussaieff Red. 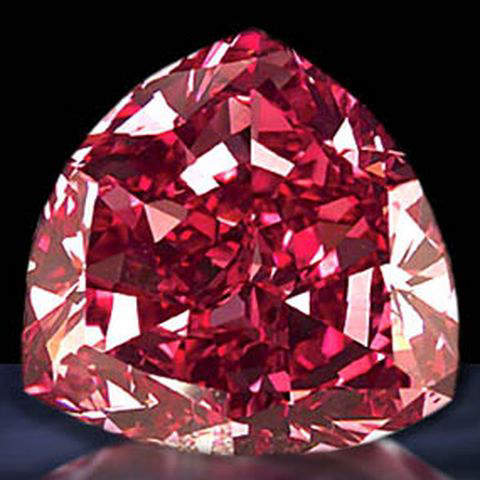 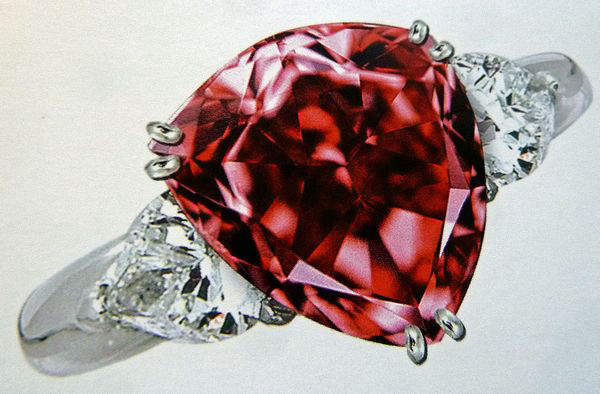 Moussaieff Red diamond set as the centerpiece of a platinum ring

The second largest red diamond in the world is the 5.05-carat, emerald-cut Kazanjian Red diamond

The second largest red diamond in the world was discovered as a 35-carat rough in Lichtenberg, South Africa, in 1927, during the "diamond rush" of the mid-1920s. The rough diamond was cut in Amsterdam, and after cutting and polishing, weighed 5.05 carats. The cut employed was an emerald-cut, believed to be the best cut that suited the rough stone. At the onset of World War II, the diamond's owners placed it in a safe in Arnhem, the Netherlands, but was eventually seized by the Nazis, who dispatched the stone to Germany. The red diamond was later discovered by U.S. General Joseph McNarney in a salt mine, but the General believed the stone to be a ruby. The stone eventually entered the private collection of an anonymous diamond connoisseur, in which it remained for 30 years, before Kazanjian Bros. Inc. purchased it in February 2007. The previously unnamed 5.05-carat Red Diamond thus acquired the name "Kazanjian Red" diamond. The "Kazanjian Red" was put on display at the Morgan Memorial Hall of Gems of American Museum of Natural History, New York, from October 1, 2010 to March 13, 2011., together with the 31.06-carat Wittelsbach-Graff blue diamond. 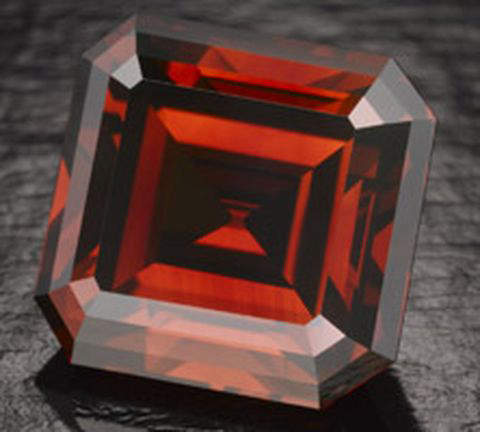 The Graff Purplish-red diamond, is a 2.26-carat, modified octagonal-cut, fancy purplish-red, SI2 clarity diamond set as the centerpiece of a 18k pink gold ring, surrounded by four heart-shaped petals, each set with a large heart-shaped colorless diamond in the center, and lined by a single layer of small, pave-set, brilliant-cut pink diamonds, The shoulders of the ring are bifurcated and set with small, brilliant-cut, pink diamonds. 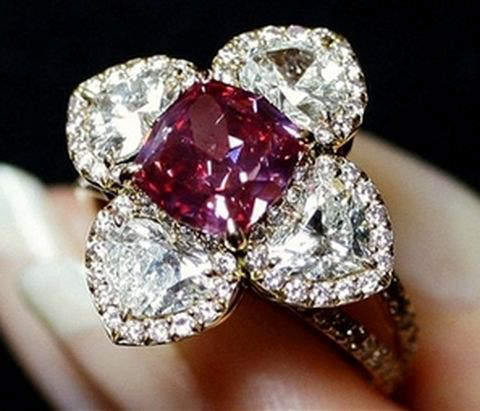 1.92-carat, rectangular-cut, fancy red, unnamed red diamond, that set a new price-per-carat auction record for a red diamond of US$ 1,694,101 at Christie's Magnificent Jewels Geneva Sale on May 15, 2013 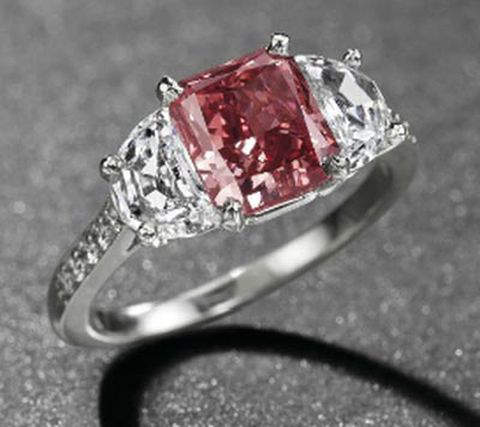 Christie's Magnificent Jewels Geneva Sale 1397, held on May 15, 2013 featured a rare red colored diamond ring assigned Lot 301, said to be the Property of a Lady of Title. The 1.92-carat, rectangular-cut, fancy red diamond with a clarity grade of VS2, is set as the centerpiece of a platinum ring, flanked on either side with half-moon diamonds and the shoulders pave-set with round brilliant-cut diamonds. The Lot was accompanied by a report no. 11360842 dated March 20, 2001 issued by the GIA, stating that the diamond is a fancy red color, VS2 clarity diamond.

The world's 1st, 2nd and 3rd largest red diamonds, the Moussaieff Red, the "Kazanjian Red" and the "DeYoung Red," have weights of 5.11 carats, 5.05 carats, and 5.03 carats respectively. In comparison, the world's largest colorless (D-color)diamonds of the same rank, Cullinan I, Cullinan II, and the Centenary diamonds have weights of 530.20 carats, 317.40 carats, and 273.85 carats respectively. These statistics clearly show that the rarity of the red color is combined with the restricted size of the diamonds. In terms of size, the above red diamonds would not get anywhere near the world's famous large diamonds, yet they are famous for the fact that they are red, one of the rarest colors in natural diamonds.

Please do not copy our tables. We may be compelled to inform the search engines or file a DMCA request if our content and tables are plagiarised.

The combined characteristics of rarity and beauty, make red diamonds the most expensive of all diamonds in the world. The Hancock Red diamond, which has an extraordinary deep ruby-red color, and having a weight of only 0.95 carats sold for $ 880,000 at a Sotheby's auction in 1987. This works out to a record price of $ 926,000 per carat. This record had been sustained for the last 20 years, and appears to have been broken only in October 8, 2007, when a 6.04-carat, internally flawless, fancy vivid blue diamond fetched a price of $ 7.98 million-which works out to a new world record of  $ 1.32 million per carat -at a Sotheby's auction held in Hong Kong. Sotheby's said that the buyer was Moussaieff Jewelers from London, which has a reputation for acquiring extremely rare and costly gemstones, like the Moussaieff Red diamond. The seller of this diamond is said to be a private Asian collector.