The Dresden Green diamond derives its name from Dresden, the capital city of Saxony in Germany. Frederick Augustus II (1733-63), the Duke and elector of Saxony (a prince with the right to participate in choosing the Holy Roman Emperor), bought the diamond at the Leipzig Fair in 1741. This rare and beautiful natural green diamond has ever since remained in  Dresden, except for a period after World War II when the Russians took the diamond to Moscow, with the other Crown Jewels, and later returned it in 1958. 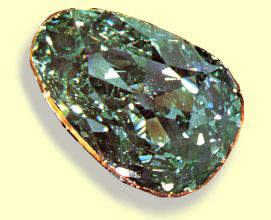 The Dresden Green is the largest and finest natural green diamond ever found, and has a pear-shaped cut, with a weight of 40.70 carats. The Gemological Institute of America (GIA), that examined the stone in 1988, has categorized this diamond as rare Type IIa diamond of exceptional quality, and assigned a clarity grade of VS-1, with a potential of reaching the maximum grade IF (internally flawless). In other words a slight re-cutting of the stone could easily eliminate superficial inclusions, upgrading the stone to IF clarity. The dimensions of the stone are 29.75 x 19.88 x 10.29 mm. The symmetry and polish of the stone is graded as very good, a tribute to the 18th century cutters of this diamond. 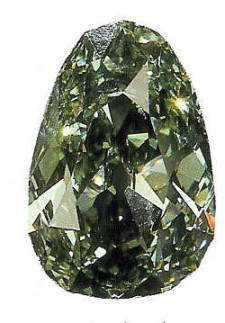 Another exceptional feature of the diamond is that the green color is almost uniformly distributed throughout the diamond, instead of being confined to the outer layers as a skin or restricted to certain areas as patches.

Type IIa diamonds are not only nitrogen-free but also free of any other  impurities such as boron, hydrogen etc. In other words they are chemically pure. But Type IIa diamonds can be of three categories :-

1. Structurally perfect - The crystals are perfectly formed, and the diamonds are absolutely colorless. They constitute 1-2 % of all naturally occurring diamonds. D-color diamonds belong to this group.

2. Structurally imperfect - The crystals are plastically deformed during their formation deep inside the earth's crust and subsequent rise to the surface. They constitute less than 0.1 % of all diamonds. The plastic deformation changes the absorption spectrum of the diamond producing rare fancy colors such as red, pink, purple, brown etc.

3. Naturally irradiated - The crystals have been exposed to natural irradiation for long periods of time, after their formation, deep inside the earth's crust. The exposure alters the atomic structure of the diamond, which changes it's absorption spectrum, causing a green color. Their occurrence is much less than 0.1 % of natural diamonds. In our long list of famous diamonds the only green diamonds are the Dresden Green, the Ocean Dream diamond and the Gruosi Green diamond. This gives an indication as to the rarity of green diamonds.

The depth and distribution of green color, in green diamonds depends on the type of radiation to which the diamond was exposed to. If the radiation was mainly alpha radiation emanating from naturally radioactive uranium compounds, the green color will only be skin deep or found in superficial patches. This green color may easily be removed during the cutting and polishing processes. However if the radiation was beta or gamma radiation, that could penetrate deeper into the crystal, the green color will be formed to a greater depth, and sometimes the entire interior of the stone will be colored green, as in the case of the Dresden Green. It is important to note that natural green diamonds are not radioactive.

The Dresden Green is an early 18th century stone, and in all probability originated in the Kollur mines, near Golconda, in Southern India. The stone was purchased in India by the famous London diamond merchant of early 18th century, Mr. Marcus Moses, who later met His Majesty King George I (1714-27), by appointment, with a view of selling the diamond to the King for a sum of £ 10,000. The King was very much pleased and impressed by this large diamond of fine emerald-green color.

From all accounts it appears that the green diamond Marcus Moses purchased  in India, was already cut and polished, and in all probability the diamond would have been cut at the famous diamond cutting center in India at the time, Ahmedabad.

The earliest reports on the Dresden Green in Europe provides some very interesting reading. A narrative that appeared on the 27th edition of the London news-sheet, the Post Boy, published on October 25th, 1722, runs as follows :- "On Tuesday last, in the afternoon, one Mr. Marcus Moses, lately arrived from India, had the honor to wait on his Majesty King George I, with his large diamond, which is of a fine emerald green color, and was with his Majesty nearly an hour. His Majesty was very much pleased with the sight thereof. It is said there never was seen the like in Europe before, being free from any defect, and he has shown His Majesty several other fine large diamonds, the like of which 'tis said were never brought from India before. He was also, the 25th, to wait on their Royal Highnesses with his large diamond, and they were surprised to see  one such largeness, and of such fine emerald color, without the help of a foil under it. We hear the gentleman values it at £ 10,000."

A second reference to the Dresden Green diamond can be seen in a letter written in 1726, by Baron Gautier, the assessor of the Geheimes Rath's Collegium in Dresden, to the Polish Ambassador in London. In this letter he says that the green diamond was offered to Duke Frederick Augustus I (1694-1733), for a sum of £ 30,000, by a merchant from London.

Frederick Augustus I was a great connoisseur and collector of arts, artifacts, jewels and other treasures. He started a modernization program for the city, constructing several buildings in the Baroque and Rocco styles, and he set up a "Green Vault" in Dresden Castle, with interior decoration done by Persian designers, to house his vast collection of sculptures, paintings, jewels and other treasures. The present day Albertinium Museum, which houses the contents of the Green Vault, was built on the same site as the original Dresden Castle, which was destroyed by the allied bombings of world war II. 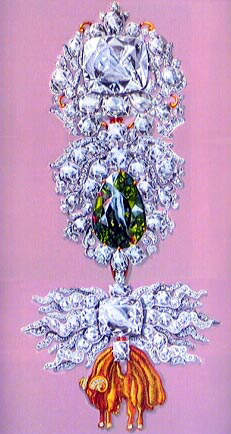 Frederick Augustus II, assigned his court jeweler, Dinglinger, to incorporate his newly acquired green diamond in the decoration of the Golden Fleece, a setting that lasted only four years, and was dismantled in 1746. The Duke then decided to make a new Golden Fleece, incorporating two famous diamonds, the Dresden Green (40.70 carats) and the Dresden White, a cushion shaped diamond, weighing 49.71 carats. The goldsmith Pallard from Vienna was entrusted with this task. 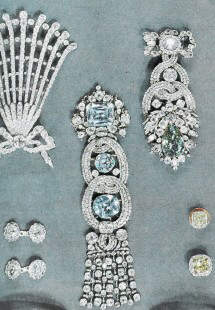 The seven years war was the last major conflict before the French Revolution to involve all the great powers of Europe. France, Russia, Austria, Sweden, and Saxony were aligned on one side against Prussia, Great Britain, and Hanover on the other. The war lasted from 1756 to 1763, and arose as a result  of the Austrian Hapsburgs attempt to win back the rich province of Silesia, which had been captured by Frederick II, the Great of Prussia, during the war of Austrian Succession.(1740-48). During this period of prolonged hostilities, the valuable treasurers of the Green Vault were transferred to the safety of the fortress of Konigstein, situated by the Elba River in Southeast Dresden. Several years after the end of this war, in which Saxony was defeated by Prussia, the Pallards Golden Fleece ornament was also broken up. In 1768, another jeweler Diessbach, set the Dresden Green diamond on a hat clasp and this ornament has survived up to this day.

In 1806, Napoleon conquered Saxony and made it a Kingdom. This Kingdom lasted until 1918, when Saxony's monarchy was abolished after Germany's defeat in world war I, and a republican constitution was adopted.

Dresden the capital of Saxony was called the "Florence on the Elba," before world war II, and was considered as one of the world's most beautiful cities, owing to it's architecture and art treasurers. The Green Vault was open to the public until the beginning of world war II. In 1942, the invaluable treasurers in the Green Vault were again transferred to the Fortress of Koningstein for safe keeping. During the war, Dresden was almost completely destroyed by the massive bombing raids that took place on the night of February 13-14, 1945, in which 800 aircraft of an Anglo-American force took part. The bombardment of the city continued up to April 17th. The raids succeeded in obliterating the greater part of one of the most beautiful cities in Europe, killing between 35,000 and 135,000 people, but achieved little militarily.

The Dresden Green Diamond in the hat clasp ornament

In October 2000, the Dresden green was taken to Washington, where it was displayed in the Harry Winston Gallery at the Smithsonian Institution, alongside an equally famous and historical diamond, the Hope, a natural deep blue diamond also from the Kollur mines. The diamond was displayed at the Smithsonan Institution until Januaary 2001. Subsequently the stone was returned to the Albertinium Museum in Dresden it's permanent home.