The Dresden White diamond derives its name partly from Dresden, the capital city of Saxony, in East Germany, and partly from the color of the diamond. The diamond was one of a magnificent collection of jewels and jewelry put together by Frederick Augustus I, also known as Augustus the Strong, the King of Poland and elector of Saxony who ruled between 1694 and 1733, who was noted for his extravagant and luxurious tastes. 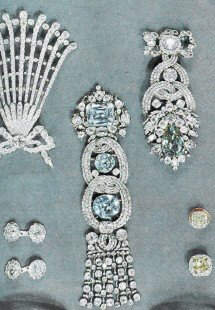 The Dresden White diamond is a 49.71-carat, colorless, cushion-cut diamond with an unknown clarity grade, but going by the description of the diamond should be exceptional. Augustus the Strong was so captivated by the diamond that he is reported to have paid around a million dollars to acquire it. Thus the diamond undoubtedly was of the "finest water" or "purest water", descriptive terms used in the past to refer to absolutely colorless, D-color diamonds. 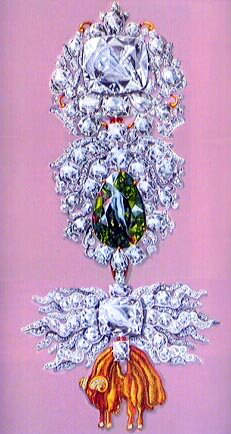 The golden fleece ornament ,drenden white (on top) and the dresden green (in the middle).

Being a D-color diamond, the Dresden White is a Type IIa diamond free of nitrogen and other impurities, and having a perfectly formed crystal structure. Impurities and distortions in the crystal structure are two of the main factors that cause color in diamonds. In the absence of such factors these diamonds are absolutely colorless and are known as D-color diamonds in the GIA color grading system. However, they constitute only 1-2 % of all naturally occurring diamonds. These diamonds are said to be chemically pure and structurally perfect diamonds.

The diamond being a late 17th century or early 18th century stone, is undoubtedly of Indian origin,  and possibly originated in the famous Golconda mines of Southern India, noted for producing diamonds of the "purest water", sometimes referred to as "whiter than white" diamonds.

When the diamond was shown to Frederick Augustus I, the King of Poland and elector of Saxony, he was so taken up by the cut, clarity and color of the diamond, that he decided to acquire the diamond at any cost. Eventually he is reported to have paid between $ 750,000 and $ 1,000,000 for the diamond, perhaps  a record price per carat paid for a colorless diamond at that time. The diamond came to be known as the Dresden White or Saxon White diamond, and was only second in importance to the celebrated Dresden Green diamond, among the valuable collection of jewels in the Green Vault, in Dresden.

Frederick Augustus I (1694-1733) was a monarch of extravagant and luxurious tastes. He contributed a great deal to develop the Saxon industry and trade. But his greatest achievement was the modernization of the city of Dresden in the Baroque and Rococo styles, which eventually developed into one of the most beautiful cities of the world. Frederick Augustus I was also a great connoisseur and collector of artworks such as paintings, sculptures and other art objects. He was also a collector and connoisseur of jewels and jewelry, and put together an extravagant collection of these items. His collection of paintings included important renaissance and baroque works by Italian, Dutch, and Flemish masters. Raphael's "Cistine Madonna" was prominent among this collection. In order to house his enormous collection of paintings, sculptures, jewels and other treasures he set up a "Green Vault" in Dresden Castle. Today the contents of the "Green Vault" are housed in the Albertinium Museum, built on the same site as the Dresden Castle, that was destroyed by the massive allied bombings of World War II.

Frederick Augustus I was succeeded by his son Frederick Augustus II (1733-1763) who continued with his father's modernization program for the city of Dresden. He too was a notable patron of the arts, and a collector of jewels. He purchased the famous Dresden Green diamond at the Leipzig Fair held in 1741, for a sum of 400,000 thalers. In the year 1746, Frederick Augstus II commissioned the jewelry designer and goldsmith Pallard of Vienna, to design a golden fleece that incorporates both the Dresden White and Dresden Green diamonds. Pallard's golden fleece ornament was made up of three sections. The 49.71-carat Dresden White diamond was incorporated as the centerpiece of the top most section, surrounded by several smaller white diamonds. The more famous 40.70-carat, pear-shaped, Dresden Green diamond was set as the centerpiece of the middle section of the fleece, also surrounded by smaller white diamonds. The lowermost section which carried the golden fleece had another unnamed cushion-shaped white diamond as its centerpiece.

During the hostilities of the seven years war from 1756 to 1763 - that involved Saxony on the side of  Austria, France, Russia, and Sweden against Prussia, Great Britain and Hanover, sparked off by attempts by Austrian Hapsburgs to win back the rich province of Silesia, captured previously by Frederick II the Great of Prussia during the war of Austrian succession (1740-48) - the valuable treasures of the "Green Vault" were transferred to the safety of the fortress of Konigstein in southeast Dresden by the Elba river. The war ended with defeat for Saxony, and the treasures were moved back to the "Green Vault." Pallard's golden fleece was dismantled several years after this war in 1768. However, the upper and the middle sections of the fleece containing the Dresden White diamond and the Dresden Green diamond have been preserved up to this day though in a different setting, as hat pin ornaments. See picture below.

The kingdom of Saxony

Display of the treasures of the Green Vault

The invaluable treasures of the "Green Vault" was put on public display after World War I and remained so until the beginning of World War II. At the height of the war in 1942, the treasures were moved again to the safety of the Konigstein fortress, and thus escaped the shattering aerial bombardment by the allied forces on the night of February 13th and 14th, 1945, in which more than 800 aircraft of the Anglo-American forces took part. The bombardment completely destroyed the city of Dresden, one of the most beautiful cities in the world, and killed between 35,000 and 135,000 people, but achieved little militarily.

The treasures of the Green Vault are taken to Moscow

The Soviet Trophies Commission which was in the city at that time of the devastating bombing raid of 1945, took the contents of the "Green Vault" to Moscow, but returned them safely in 1958. The contents are now on display in the Albertinium Museum in Dresden, which was built on the same site as the former Dresden Castle.