The name of the diamond seems to have been inspired by two of the unique characters of the stone, viz. the strong brown color, and its extraordinary brilliance, which led the owner of the diamond, Mr. Joseph Baumgold, of New York, to name it the "Earth Star".

The "Earth Star" is a 111.59-carat, pear-shaped diamond with a strong brown color and extraordinary brilliance, The exact color grade of the diamond is not known, but under the Argyle color grading scale for brown diamonds, going by the description of the diamond, it may fall under dark brown, which is equivalent to fancy cognac and C7 color grade. 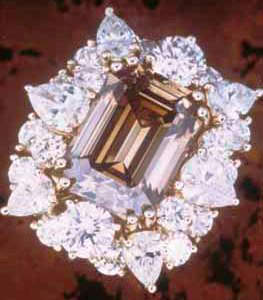 The "Earth Star" diamond being a brown diamond, is most probably a Type IIa diamond, which is nitrogen-free and in which the brown color is caused by plastic deformation of the crystal structure, which alters the absorption spectrum of the stone. Such diamonds have a highly strained character, as observed under crossed polarizing filters. Most of the Argyle brown diamonds are Type Ia diamonds, because apart from the plastic deformation, these diamonds also contain detectable quantities of Nitrogen, which vary from 100 to 500 ppm.

The diamond was discovered on May 16, 1967, at the Jagersfontein mine in Orange Free State, South Africa. The Jagersfontein mine was a diamond pipe mine opened in 1888, after the accidental discovery of a 50-carat diamond on a farm in the area in 1870. The mine was owned and operated by the New Jagersfontein Mining and Exploration Company Limited, formed in 1887,

but subsequently came under the ownership of De Beers Consolidated Mines Ltd. The Jagersfontein mine was the source of the world's second and ninth largest gem-quality rough diamonds, the Excelsior of 995 carats discovered in 1893, and the Reitz of 650 carats discovered in 1895. The Reitz was subsequently cut into a cushion-cut brilliant of 245 carats in 1887, the year of Queen Victoria's Diamond Jubilee, and was named the "Jubilee Diamond", to commemorate this occasion. The Jagersfontein mine was in operation from 1888 to 1970, except during the period of the "Great Depression" and world war II, when it was temporarily closed.

In the rough state the "Earth Star" weighed 248.9 carats. The diamond had gone through the entire recovery process until it appeared on the grease tables of the recovery plant. The discovery of this unique stone, was quite a surprise for the miners, as well as the people in the diamond industry, because Jagersfontein had been a source of numerous fine diamonds, and only a few of them had been brown. In almost 80 years of it's existence, this was the first time, that a large stone of this color was produced. Besides, this specimen came from 2,500 feet below the surface, which was exceptionally deep, for a gem of this size to be found. The diamond was purchased by Mr. Joseph Baumgold of Baumgold Brothers of New York, who named the diamond the "Earth Star."

The "Earth Star" diamond was taken to South Africa in 1971, to be displayed at an exhibition, held to mark the centenary of the discovery of the Kimberley mine.

We do not have a photograph of the earth star diamond.Please let us know if you have one. Alternatively you may upload it to our forums.