The diamond gets its name from Empress Eugenie the consort of Emperor Napoleon III, who purchased the diamond in 1853, and presented it as a wedding gift to his bride, Eugenie de Montijo, daughter of a Spanish Nobleman.

The diamond is a 51-carat, perfectly cut, oval-shaped  colorless, brilliant of unknown color and clarity grade.

The diamond first came into prominence in 1762, the year Catherine the Great of Russia, ascended the throne as Empress of Russia. She wore the diamond as the centerpiece of a hair ornament, a piece of jewelry she wore quite often at her court. The diamond is possibly of Brazilian origin. Diamonds were discovered in Brazil in the early 18th Century, and after 1725, Brazilian diamonds in large numbers found their way to countries in Europe.

Catherine II the Great, the German-born empress of Russia has gone down in the history of Russia as one of its greatest rulers. Catherine the Great, who ruled between 1762 and 1796, carried on the work begun by Peter the Great, and led her country into full participation in the political and cultural life of Europe. Among the achievements of her 34-year rule was the reorganization of the administration and law of the Russian Empire, and the extension of the Russian territory, adding the Crimea and much of Poland. She reorganized 29 provinces under her administrative reform plan, and built more than 100 new towns, and expanded and renovated the old towns. She also expanded trade and communications. She presided over a brilliant court, which attracted the intellectuals and the greatest minds of Europe. During her 34-year rule Russia turned out to be one of the greatest powers of Europe. What the German-born Catherine achieved for Russia during her reign, which only a few other Russian Emperors could equal, puzzles the modern historian.

But, Catherine's private life was not so exemplary. She was not the type of woman who would be tied down to a single man. Through out her long reign she took many lovers, often elevating them to high positions as long as they held her interest, and then pensioning them off with large estates and gifts of serfs. One of her first lovers was a young artillery officer in the Russian Army, Grigory Grigoryevich Orlov, with whose help in 1762, she organized the coup d'etat that ousted her husband Peter III, and later installed herself as the Empress of Russia. Catherine then gave her lover the title of Count, and promoted him to the rank of Adjutant General, and also made him the Director General of Engineers, and General-in Chief. In 1772, Catherine appointed Count Orlov as her chief delegate to a peace conference to end the Russio-Turkish war that began in 1768.

In 1774, Count Orlov ceased to be Catherine's lover, and she took Grigory Alexandrovich Potemkin, who had distinguished himself in the war with Turkey,  as her new lover. Potemkin was the only one of Catherine's favorites, who was not only her lover but also had the privilege of sharing power with the great empress. Potemkin was an experienced diplomat as well as a brilliant military officer. The capture and annexation of the Crimea from the Turks is credited to Potemkin, and this together with the acquisition of the territories of the Crimean Khanate helped Russia to gain possession of the strategic north shore of the Black Sea. Catherine's glorification reached its climax in a voyage to the Crimea, arranged by Potemkin in 1787. In a festive Arabian Nights atmosphere the Empress crossed the country to take possession of her new provinces. 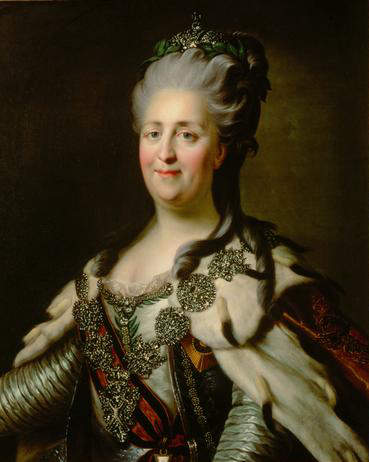 Catherine the great. empress of Russia

In recognition of his  services both military and diplomatic, and for conducting her triumphant tour through the newly acquired Crimea, Catherine the Great, presented the 51-carat oval-shaped brilliant, which later came to be known as the "Empress Eugenie" diamond, to her lover Grigory Alexandrovich Potemkin. She also bestowed on him the surname  taurisschesky, derived from the Russian name for Crimea, Khersonesus Taurica, and gifted him a magnificent palace called Tauria. 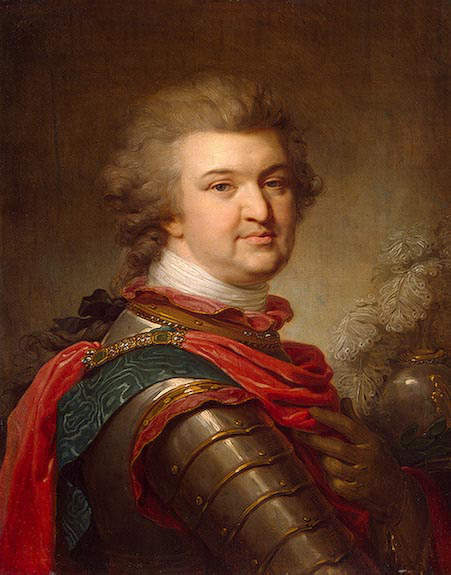 As a minister of Catherine the Great, Potemkin, had acquired an extensive collection of jewelry, which after his death in 1791, was inherited by his favorite niece, Countess Branitsky, from whom the jewelry, which included the Eugenie diamond, passed to her only daughter, Princess Colorado. In 1853, Napoleon III of France,  purchased the diamond from Potemkin's grandniece, and presented it as a wedding gift to his bride Eugenie de Montijo. The diamond was later mounted on a beautiful diamond necklace, and Empress Eugenie gave it her own name, by which it is still known today.

Napoleon III, who was the nephew of Napoleon Bonaparte, ruled France first as President from 1948 to 1952, and later as Emperor from 1952 to 1970. He gave his country two decades of prosperity under a stable authoritarian government. Countess Eugenie de Montijo visited Paris in 1851, the year before Louis Napoleon became emperor of France. Louis Napoleon was installed as Emperor Napoleon III of France in 1852. Having failed to obtain the hand of a princess of equal birth, Napoleon III married the countess Eugenie de Montijo, the daughter of a Spanish nobleman, in 1853. 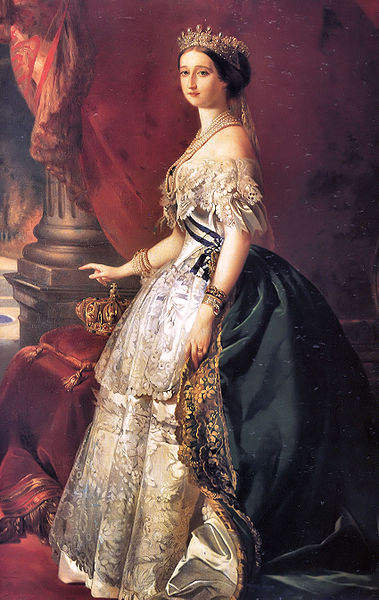 The City of Paris, honored their new empress by giving her a wedding gift of 600,000 francs, but at her request the money was used to build a college for females. Empress Eugenie subsequently made an official trip to Great Britain, with her husband Emperor Napoleon III, and this visit heralded the beginning of a close relationship between Empress Eugenie and Queen Victoria. Empress Eugenie, who was the last Empress of France, influenced her husband in foreign policy matters, and served as regent during his absence. 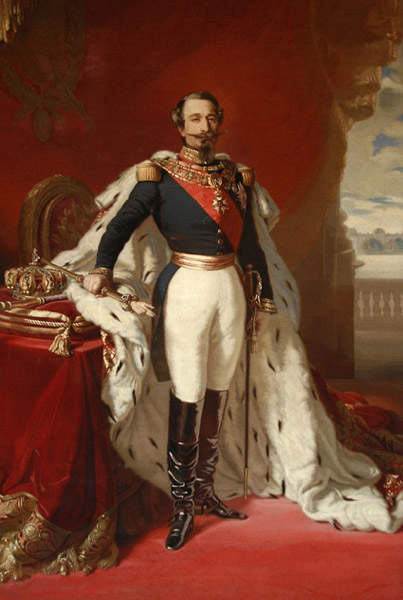 After the disastrous Franco-German war of 1870-71, in which Napoleon III was defeated, and surrendered to the Germans, he was deposed and France proclaimed the Third Republic. With the fall of the French Empire, Empress Eugenie escaped with her son Louis to England, where she was warmly welcomed by her friend Queen Victoria. Subsequently, when Napoleon III was released by the Germans, he too joined Empress Eugenie and his son Louis in England. Empress Eugenie carried some of her jewelry, which included the Eugenie diamond,  when she left France in 1870. She later deposited them in the vaults of the Bank of England, for safe keeping.

Empress Eugenie gradually disposed of her jewelry as and when the need arose through the renowned London auction house Christie's, but the 51-carat Eugenie diamond was sold to  an Indian Maharajah, Mulhar Rao, the Gaekwar of Baroda, for about $ 75,000. The Maharajah was said to be the eighth richest man in the world at that time, and he had a renowned gem and jewelry collection, which included the "Star of the South" diamond and the "English Dresden" diamond.

In 1874, Mulhar Rao, the Gaekwar of Baroda, was involved in a sensational case that implicated  him in the attempted murder of the British Resident Colonel Phayre, by mixing diamond powder in his food. The plot was unsuccessful, and the Maharajah was tried on a charge of attempted murder by poisoning. The Jury that tried the Maharajah consisted of three Englishmen and three Indians, and they failed to reach a unanimous verdict. But Lord Northbrook, the British Viceroy decided to depose the Maharajah, on the grounds of mismanagement, and was replaced by another appointee from his family. The Eugenie diamond together with the other famous diamonds such as the Star of the South diamond, the English Dresden diamond, and the Akbar Shah diamond remained in the Gaekwar family until as recently as 1988, when Fatehsinhrao Gaekwad and his wife Shanthadevi had declared the diamonds as part of their valuables in the wealth tax returns for 1988. However the present whereabouts of the diamond are not known.

We do not have a photograph of the Empress Eugenie diamond.Please let us know if you have one. Alternatively you may upload it to our forums.