The English Dresden diamond gets its name from Mr. E. H. Dresden the 19th century jeweler and diamond dealer of London, who purchased the 119.5 carat rough diamond discovered in the Bagagem district of Brazil in 1857, and subsequently forwarded it for processing to the renowned diamond cutting firm Messrs. Coster's of Amsterdam, who had previously earned the distinction of cutting the " Star of the South" diamond also discovered in Brazil, in 1853 and re-cutting of the most famous of all historic diamonds, the Koh-i-Noor, in 1852. 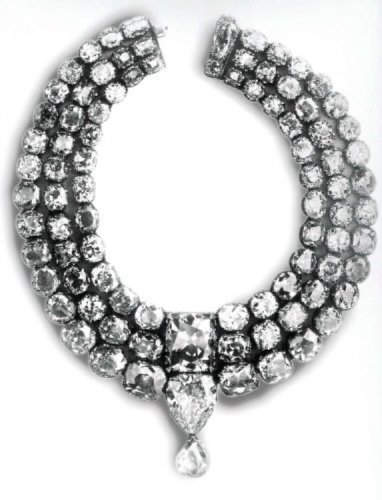 Maharajah Khande Rao Gaekwad's three-tiered diamond necklace, incorporating the cushion-cut "Star of the South" diamond and the pear-shaped "English Dresden" diamond below it, as the centerpiece of the necklace.

The English Dresden diamond is a 76.5-carat, pear-shaped, colorless diamond, reputed to be of exceptional color and clarity. Going by the glowing accounts of this extraordinary diamond, the color grade of the diamond is most probably D-color and the clarity internally flawless (IF), and perhaps also externally flawless. In describing the diamond, Mr. Dresden himself asserted that "there is no diamond in the world to come up to it." He also relates of an incident where he happened to be at Garrard's one day, and he matched his pear-shaped diamond with the Koh-i- Noor, and to everyone's surprise the color of the Koh-i-Noor appeared slightly yellowish in comparison to his perfectly white diamond. A "gemologist" of that period had said that, "the diamond is perfectly pure, free from defects, and has extraordinary play and brilliancy. Indeed the quality of the stone is superior to the Koh-i-Noor."

Being an absolutely colorless diamond, the English Dresden diamond is most certainly a Type IIa diamond, which constitute about 1-2 % of all naturally occurring diamonds. Such diamonds do not possess any of the factors that can cause color in diamonds, such as 1) Presence of impurities in the crystal such as nitrogen, hydrogen and boron. 2) Presence of structural abnormalities, caused by plastic deformation of the crystal. 3) Exposure to natural irradiation over a long period of time. As such these diamonds are said to be chemically pure and structurally perfect diamonds. In other words they are known as the "purest of the pure" of al diamonds.

The English Dresden diamond is a unique diamond, not only because of its purity and clarity, but also because  of the strikingly parallel course of the diamond with another famous diamond discovered in Brazil, the "Star of the South" diamond, from its discovery to the final ownership of the diamond. A comparison of the history of the two diamonds would be interesting and informative.

Comparison of histories of English Dresden diamond and the Star of the South Diamond.

Thus the histories of the two diamonds English Dresden and the Star of the South seem to be closely parallel to one another. Both diamonds were discovered in the same Bagagem district of Brazil, almost around the same time. The diamonds eventually found their way to the same city Rio de Janeiro, where they were purchased by the agents of European dealers. The diamonds were then cut and polished by the same diamond cutting firm in Amsterdam, Messrs. Coster's, and forwarded to the same country India, by the same agency of Mr. E. H. Dresden, where both stones were eventually purchased by the same Royal customer, the Gaekwar of Baroda, Mulhar Rao.

The English Dresden diamond was discovered in 1857, in the Bagagem district of Brazil, and later purchased in Rio de Janeiro, by the agents of E. H. Dresden, also in the same year, who forwarded the stone to their offices in London. The rough stone which was actually a fractured crystal weighed 119.5 carats. Mr. Dresden then forwarded the stone to the renowned diamond cutters of Amsterdam, Messes Coster's, who had already earned a reputation by re-cutting the Koh-i-Noor diamond in 1852, belonging to the royal family of the United Kingdom, and later cutting their own rough diamond the Star of the South, in 1853. The actual cutting of the stone was carried out by Mr. Voorsanger, who transformed the rough stone into a remarkable and perfectly cut pear-shaped diamond, weighing 76.5 carats, with a loss of only 43 carats, equivalent to a percentage of 36%. The conversion of the fractured crystal into a well proportioned and perfect pear-shaped diamond, with a minimum of weight loss, speaks volumes about the extraordinary skill of Mr. Voorsanger as an accomplished diamond cutter.

Mr. Dresden then looked for a prospective buyer for his magnificent diamond, among all the royal families of Europe, but all his attempts turned out to be fruitless, in spite of the extraordinary quality of the diamond. Eventually an Indian Maharajah accompanied by an English cotton merchant from Bombay, visited London in 1863, with the specific purpose of purchasing the renowned diamond, having heard glorified accounts of the flawless diamond while in India. The Maharajah was highly impressed by the diamond but was not able to purchase it, as the price quoted for the diamond, £ 40,000, was beyond his means. The English merchant who accompanied the Maharajah was equally impressed by the diamond, and expressed a desire to own it if ever his financial situation improves. Within an year of making this statement, almost miraculously his financial position did improve, due to the windfall profits realized by the boom in world cotton prices as a result of the outbreak of the great war of secession in the United States, also known as the American civil war. The English cotton merchant immediately got in touch with Mr. Dresden with a view of purchasing the diamond as promised, and entrusted a middleman to effect the purchase. It is reported that the middleman played a double game in executing the transaction, slashing the price of the diamond to £ 32,000, without the knowledge of the buyer, by raising the issue of authenticity of the diamond, and it's exorbitant price and informing the seller that the buyer had actually offered only £ 32,000 for the diamond. Having successfully convinced the seller to part with his diamond, for the reduced amount, he reached Bombay, and informed the buyer that he had successfully effected the transaction for the previously agreed amount of £ 40,000, as the seller was not agreeable to any price reduction. The middleman thus coolly pocketed £ 8,000 from this transaction.

The cotton merchant it is said was not able to enjoy the ownership of the priceless gem for long, as he got into financial difficulties again with the crash in the cotton prices, which eventually led to his untimely death, and the executors of his estate disposed of the diamond, which was purchased by the Gaekwar of Baroda, Khande Rao (1856-70), who had previously purchased the "Star of the South" diamond. The Gaekwar of Baroda got the English Dresden diamond mounted on a special necklace together with the "Star of the South" diamond in 1880. Later in 1948 the necklace was modified by adding more diamonds, and the Maharani of Baroda Sita Devi was photographed wearing the modified version at her husbands birthday party. The present whereabouts of the diamond are unknown.