The Eureka diamond was the first ever diamond to be discovered in South Africa, which changed the course of history of South Africa forever, and as such has immense historical significance. The name of the diamond seems to have been inspired by this significant event in the history of the diamond industry of South Africa. Eureka! Eureka!! meaning I have found it! I have found it! was the Greek expression purported to have been used by the famous mathematician and inventor Archimedes, running  naked along the streets of Syracuse, when a sudden inspiration dawned on him concerning the principles of buoyancy, while he was in his bath. Being the first diamond ever to be discovered in South Africa, the name Eureka, seems to be very appropriate for the diamond. 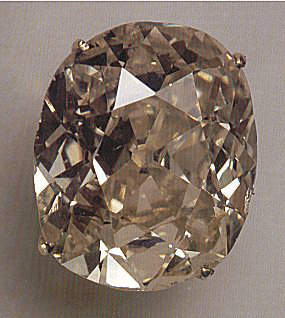 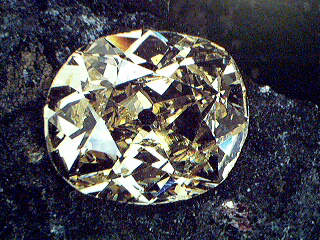 In the table below, the Eureka diamond occupies the last position, as it is a diamond of only 10.73 carats. Most of the diamonds in this table are of South African origin except for the Incomparable, Florentine and the Shah diamond. The Florentine and the Shah are of Indian origin and the Incomparable is  from Zaire. For a comprehensive list of yellow diamonds more than 100 carats in weight, please refer to the page on Mouna Diamond.

Being a brownish yellow diamond the Eureka is most probably a Type IaAB diamond, where the yellow color is caused by N3 centers, which are groups of 3-atoms, that absorb visible light in the blue region of the spectrum, causing it's complementary color yellow to appear. The A and B aggregates in this diamond do not affect the color of the diamond, as they contain an even number of atoms, 2 and 4 respectively. The brown color of the diamond is caused by plastic deformation of the crystal during it's formation deep inside the earth and subsequent rise to the surface.

There are two different versions on how the Eureka diamond came to be discovered. According to the first version a shepherd boy who was tending his sheep along the south bank of the Orange River, near Hopetown, casually picked up a small shining pebble from the ground. The Shepherd boy gave the shining pebble, to a 15-year old boy named Erasmus Jacobs, who subsequently gave it to his neighbor, farmer Schalk Van Niekerk, who was a collector of rare and unusual stones. Van Niekerk showed the pebble to John O' Reilly, a traveling peddler, and sought his advice. John O'Reilly knew of a person who lived in Grahamstown in the Cape Colony, one Dr. W. J. Atherstone, who was an authority on minerals and gems. John O'Reilly collected the pebble from Van Niekirk and sent it in an unsealed envelope to Dr. W. G. Atherstone, for his evaluation. After careful examination Dr. Atherstone identified the pebble as a 21.25-carat brownish yellow diamond, and the information was passed on to Van Niekirk. Eventually the stone was sold to Sir Philip Wodehouse for a sum of £ 500.

According to the second version, which is slightly different from the first, Mr. Van Niekirk who was a pioneering colonist settled in Griqualand, had a visitor one day in 1867, in the person of John O'Reilly, a trader and hunter, who was returning home to Colesburg from the interior of the countryside, and decided to break journey, and perhaps lodge with Van Niekirk for the night. Later in the evening, John O'Reilly, happened to observe Van Niekirk's little daughter, playing with some pebbles collected from the neighborhood, and was particularly attracted by a shining stone that seemed to reflect strongly the evening rays of light, of the setting sun. Reilly picked up the stone, and after careful examination, offered to buy the stone from Van Niekirk, who was puzzled by Reilly's unusual interest on a worthless pebble. Van Niekirk assured Reilley, that he could have the stone for free, and would not take any money for it. The honest trader Reilly told Van Niekirk that he believed the pebble to be a precious stone of value and would not take it for nothing. Finally it was agreed that O'Reilly should carry the stone, and after ascertaining it's authenticity and value, sell the stone and subsequently divide the proceeds equally between them. O"Reilly carried the stone to Colesburg, and later dispatched it to Dr. Atherstone of Grahamston, an authority on minerals and gemstones, for testing and evaluation. After a careful examination Dr. Atherstone was convinced that the pebble indeed was a diamond, but sought a second opinion from another authority, in the person of the Roman Catholic Bishop of Grahamstown, Bishop Ricards, who was a man of science. The Bishop confirmed that the pebble was a diamond. The stone was later sent to Hon. Richard Southey, the Colonial Secretary, who later became the Lieutenant Governor of Griqualand West, who sought further expert opinion on the authenticity of the stone, and everyone was agreed that the stone indeed was a diamond. The Colonial Secretary, later forwarded the stone to the Queens Jewellers, Messrs. Hunt and Roskell, in England, and the finding of the experts in South Africa was confirmed. They also valued the stone at £ 500. The stone was then purchased by Sir Philip Wodehouse, the Governor of the colony at that time, for £ 500.

The principal characters in both versions are almost the same except for the person who actually discovered the stone. In the first version while the discoverer of the stone is a shepherd boy, in the second version the credit is given to a small girl, who was perhaps a daughter of Van Niekirk.

The 22.5-carat rough diamond was then displayed at the Paris Exposition held in 1867. Subsequently, the stone was cut and polished in one of the diamond cutting centers in Europe, and transformed into a 10.73-carat, cushion-cut, brownish yellow brilliant, known as the Eureka diamond. The diamond is now preserved in the De Beers Archives, not for it's exceptional qualities as a diamond but more for it's historic significance.

The discovery of the Eureka diamond, provided the incentive for people to look for more stones of a similar type, and before long another stone of 8.9 carats was discovered, which also was purchased by Sir Philip Woodhouse for £ 200. The news of the two discoveries spread like wildfire, and there was great excitement all over the country. The natives started looking for diamonds everywhere and perhaps a more significant find was reported on the neighboring Zandfontein farm by a Griqua witch doctor by the name of Swartbooi. Van Niekirk approached the witch doctor, and successfully negotiated the purchase of this rough diamond in a barter deal, in which he acquired the stone, in exchange for 500 sheep, 10 oxen and a horse, almost all of Van Niekirk's possessions. Van Niekirk sold the stone to Messrs. Lilienfeld Brothers of Hopetown for £ 11,200, and the stone was christened as the "Star of South Africa". The rough stone was forwarded to England, where it was cut and polished into a pear-shaped, three-sided, D-color, stellar brilliant, weighing 47.69 carats, which was later purchased by the Earl of Dudley, and became known as the Dudley diamond. The Dudley diamond has gone down in history, as the diamond that turned the tides of fortune in South Africa, setting off a diamond rush, that eventually led to the discovery of the famous Kimberley, and other mines that changed the course of history of South Africa forever.