The name "Excelsior", meaning higher, for the massive rough diamond weighing 995 carats, seems to have been inspired by the unique shape of the diamond, that looked like a loaf of rye bread, flat on one side and rising to a peak on the other side. Perhaps the name could also have been inspired by the massive size of the rough diamond, which, when discovered in 1893, became the largest rough diamond with the highest carat weight on record, to be discovered anywhere in the world. 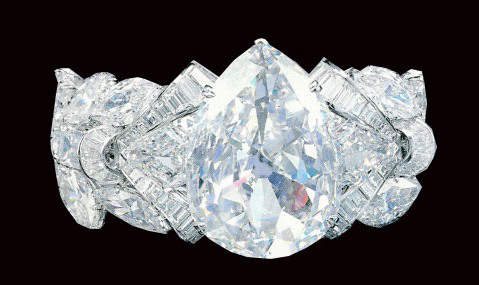 The 995-carat Excelsior rough diamond had all the unique features of the Jagersfontein diamonds, such as the bluish-white color and  a number of internal black spots. In spite of the internal flaws the stone was of very fine quality. Under the heading "characteristics of the diamond" for other famous diamonds we considered the 4Cs of the diamond, color, clarity, cut and carat weight and other associated features such as the type of diamond, and sometimes comparative features of similar diamonds of the same color, in the form of a table. This is not possible for the Excelsior diamond, as the rough stone was cut into 21 satellite diamonds, varying in weight from about 70 carats, to less than one carat in size. As such we have selected the first ten largest satellite diamonds in decreasing order of weight, and given their carat weight and type of cut, in the form of a table. The color grade of Excelsior I is G-color, which means, near colorless. The color grades of the other diamonds are not known. The clarity grades are unknown, but judging by the clarity of the rough stone, the stones could be very slightly included. In fact the decision to cleave the rough stone into so many pieces would have been prompted by the desire of the owners and the cutters of the diamond to eliminate as many black spots or inclusions as possible, in order to have several smaller diamonds of better quality rather than going in for larger diamonds of sub-standard quality.

The Excelsior I diamond had been certified by the GIA in 1991 as a stone of VS-2 clarity (very slightly included), and a color grading of G (near colorless). The Excelsior I diamond therefore, is not a type IIa diamond, which are absolutely colorless, and perhaps could accommodate only D, E, and F color grades. Therefore the excelsior diamond must be a Type Ia diamond, containing detectable quantities of nitrogen. The nitrogen atoms however are found mainly as groups of even number of atoms such as 2-atoms and 4-atoms, which do not affect the color of diamonds. However there may be a few odd groups of atoms, such as 3-atoms (N3 centers), which can impart a very, very, slight, tinge of yellow and make the diamond near colorless.

The Excelsior diamond held the unique distinction of being the World's largest gem-quality rough diamond ever to be discovered, for a period of 12 years, from 1893 to 1905, having wrested this coveted title from the Great Mogul Diamond (787 carats), which had enjoyed the undisputed distinction for 243 years, since it's discovery in the Golconda mines of Southern India, in 1650. The Great Braganza diamond (1680 carats), discovered in Brazil in the 1700s was only a spurious claimant to the unique title, having eventually being identified as only a giant topaz. The Cullinan diamond weighing 3, 106 carats and discovered at the Premier mines in Transvaal, South Africa, emerged as the "King of all rough diamonds" in 1905, relegating the Excelsior diamond to second place, a position which it still retains up to date.

The story of the discovery of the Excelsior diamond in 1893, at the Jagersfontein mine, provides interesting reading. The Jagersfontein mine in Orange Free State, in South Africa, was opened as a diamond pipe mine in 1888, after the accidental discovery of a 50-carat diamond on a farm in the area in 1870. A characteristic feature of diamonds mined in this new mine was a faint bluish tint, and the term "Jagers" was coined to refer to this special character.  Thus the name Jagersfontein is derived from the term "Jagers" used to denote the special bluish tint of the diamonds mined here. The mine became the property of the New Jagersfontein Mining and Exploration Company Limited, formed in April of 1887.

Just five years after the opening of this diamond pipe mine a dramatic discovery was made in this mine, that created history and provided a much needed boost for further mining activity. An  African worker at the mine was loading gravel into a truck, on the evening of June 30, 1893, when suddenly he noticed a large bluish-white stone, that looked like a diamond, in a shovel of gravel, which he was loading. He picked up the stone almost by instinct, and hid it from his co-workers and the prying eyes of the overseer, and delivered it directly to the hands of the mine manager.

Later it was confirmed that the stone indeed was a massive diamond, weighing 995 carats, and possessed the characteristic features of Jagersfontein diamonds, such as the bluish-white color and a number of internal black spots. The stone became the largest ever gem-quality rough diamond to be discovered in the world. The management of the company decided to reward the discoverer of the diamond for his honesty, and presented him with £ 500.00 in cash and a horse equipped with a saddle and bridle.

The New Jagersfontein Mining and Exploration Company Limited had signed a contract with a consortium of London Firms for the purchase of the mine's output. The largest of the 10 firms that constituted the consortium was Messrs. Wernher Beit & Co. By peculiar circumstances or by strange coincidence, June 30, 1893, the day the Excelsior diamond was discovered, also happened to be the day the contract between the mining company and the consortium of London firms expired. In spite of this the Excelsior was shipped to the London Office of Messrs. Wernher Beit & Co., who sought to insure the diamond for £ 40,000, but could only get insurance for £16,250.

The New Jagersfontein Mining and Exploration Company was still legally entitled to an undivided one-half share of the Excelsior diamond, according to the Director's report for the company for the year ended March 31, 1894.

While the diamond still remained in London, another dramatic discovery was made in the Jagersfontein mine in the year 1895. This was the discovery of the 651-carat "Reitz Diamond", named after the then President of the Orange Free State, F. W. Reitz. The Reitz rough diamond which later became the Jubilee diamond, is placed 9th in the above list of largest gem-quality rough diamonds ever discovered in the world. The Reitz diamond too found it's way to the mine's agents in London, where it joined it's more famous cousin, the Excelsior diamond.

The above companies having acquired the full ownership rights for both the diamonds, set about the difficult task of converting them to marketable diamonds. The Reitz diamond was cut into two gems in 1897, and the larger of the two was fashioned into a rectangular, cushion-shaped, brilliant, weighing 245 carats, which eventually ranked as the 6th largest polished diamond in the world. The year of creation of this clear white flawless masterpiece coincided with the year of Queen Victoria's Diamond Jubilee and hence the diamond was called the "Jubilee Diamond."

The Excelsior diamond however remained un-cut until 1903, a period of almost 10 years since it was discovered. In 1903, the stone was dispatched to I. J. Asscher & Co., the renowned diamond cutters of Amsterdam, who introduced a new diamond cut known as the Asscher-cut in 1902, which is also known as the square-emerald-cut. In 1904, after a prolonged study the company decided at first to cleave the diamond into ten pieces. This task was performed by Mr. A. Asscher. Subsequently more cleaving and polishing took place and the final result was 21 gems of varying sizes and cuts, ranging from 70 carats to less than one carat. The total weight of the finished stones was 373.75 carats, which works out to a loss in weight of almost 63 %. This loss was enormous by any standard, but still the final outcome was considered to be better than expected. The list of the first ten Excelsior satellite diamonds in descending order of weights is given in the table above.

The Excelsior diamonds were disposed of separately. Three of the gems were purchased by Tiffany & Co., that was then based in Union Square, New York City. The buyers of the other fragments remain anonymous, but the De Beers Company displayed one of the marquise-shaped fragments at the 1939 World Fair in New York.

The Excelsior I had remained in the possession of one unknown family in the United States, until it was purchased in 1989, by Graff Diamonds Ltd. of London, and then re-sold to an anonymous client. The diamond re-appeared for sale on two occasions in May 1991 and May 1996. The GIA had given the stone a VS-2 clarity and a color grading of G.

Last transaction and present owners of the Excelsior I diamond

In the last sale in May 1996, the Excelsior I was purchased by Robert Mouawad for $ 2, 642,000, a record price for a diamond of 70 carats. Mouawad has set the pear-shaped Excelsior I in an elaborate bracelet, which is shown in the photograph. The Excelsior diamond is the 9th largest diamond in the rare and magnificent collection of diamonds belonging to Robert Mouawad.

The excelsior diamond bracelet by Mouawad

Extraordinarily large rough diamonds like the Cullinan and the Excelsior are extremely rare findings and have a great historical significance. The probability of finding another diamond as enormous as the 3,106-carat Cullinan diamond, is extremely remote, and may not happen for at least another thousand years, or more. As such it would have been appropriate, if diamonds of such enormous size had been preserved in their rough state, for the benefit of future generations. If not, they would have to be satisfied just by reading a fictional and rather inaccurate account of their one time existence in the distant past. Perhaps, this may be one reason why the Kremlin Diamond Fund, had preserved their diamonds of enormous size, such as the "Alexander Pushkin"  and the "XXVI Congress of CPSU", in the rough state.

The cleaving of large diamonds into several smaller fragments that are eventually transformed into smaller diamonds, seem actually to be motivated by profit, rather than creating anything of historic value for posterity. The same sentiments were expressed by Alphen F Williams, the former General Manager of De Beers, in his book, "Some Dreams Come True." He said, that the decision to cleave the Excelsior into several smaller fragments as the greatest tragedy of modern times, in the history of famous diamonds. He wrote, "It was unpardonable that this exquisite diamond was so cleaved that the largest stone cut from it weighed only 70 carats. The intrinsic value meant more to it's owners than it's historical importance, so different from the spirit of the owners of the Cullinan diamond, who in deciding to have the diamond cleaved into nine pieces, insisted that one of the pieces so cleaved should be, when cut, the largest polished diamond in the world."