The name refers to a four-strand, graduated, natural, pearl necklace that appeared at the Christie's Contemporary Jewelry and Watches Sale, designated as Sale 7664, held on April 29, 2008, at Jumeirah Emirates Towers Hotel, in Dubai, United Arab Emirates, and fetched a price of $61,000, within the pre-sale estimated range of $50,000 to $80,000. 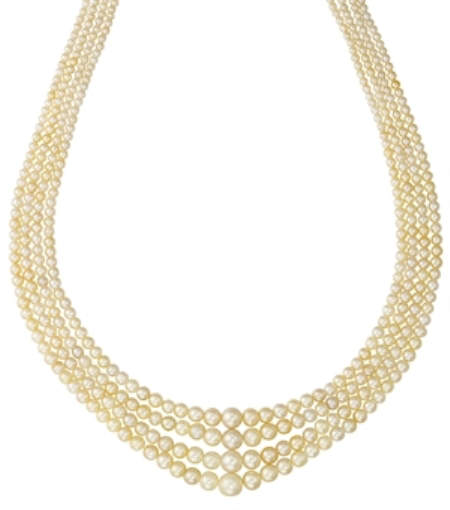 The length of the necklace is given as 46.0 cm (18 inches). Due to significant differences in length between the inner and outer rows in such necklaces, it is assumed that the length 46.0 cm represents the average length of the four rows, which according to modern classification of pearl necklaces, based on their lengths, fall within the category of "Princess" whose range of length varies from 18 - 20 inches (46 - 51 cm).

The number, sizes and arrangement of pearls in the necklace

The number of graduated pearls in each of the four rows of the necklace, starting from the inner strand to the outer strand are respectively 129, 135, 141 and 143. This gives an arrangement of 64 - 1 - 64, 67 - 1 - 67, 70 - 1 - 70, 71 - 1 - 71 respectively, starting from the inner strand to the outer strand. Number 1 in each row represents the median largest pearl, that lie one below the other at the lower end of the necklace, along its median line, that divides the necklace into two equal halves. Starting from this median pearl, the pearls in each row gradually decrease in size, and the smallest pearls are situated towards the rear of the necklace. There are altogether 548 natural pearls in this necklace, ranging in size from 2.2 mm to 8.2 mm. Each of the rows in the necklace are attached separately to the clasp behind, that is mounted with single-cut diamonds.

The color, overtone, luster and shape of the pearls in the necklace

The color of the pearls in the necklace are not stated in the Christie's webpage dedicated to this necklace, but an examination of the photograph of the necklace shows that almost all the pearls have the same hue and tone of colors, which appears to be yellowish-white. In all probability, white appears to be the main body color of these natural saltwater pearls, and yellow the overtone color, that gives the yellowish-white appearance. The luster of the pearls are also excellent, in keeping with the saltwater origin of the pearls. The color, overtones, iridescence and luster of a pearl are dependant on the thickness of the nacre, which in this case is optimum given the natural origins of the pearls. Accordingly, all these characteristics are also at the optimum level in these pearls.

The shapes of the pearls appear to be spherical and near-spherical, though some occasional button-shape pearls could also be found.

The natural provenance of the pearls in the necklace are certified by the Gem & Pearl Testing Laboratory of Bahrain. Testing for the natural provenance of pearls is a routine procedure, practiced by most of these laboratories, set up in the former natural pearl producing Gulf Countries, that by law deal only in natural pearls, and where the sale of cultured pearls, manipulated by human intervention is banned. The laboratory report issued in respect of this necklace, dated June 19 2004,  bearing No. 16532, states that the pearls are entirely natural. Thus, even though the sale of the necklace took place in April 2008, the laboratory report had been issued actually 4 years earlier in June 2004, probably at the time the anonymous owner of the necklace purchased it.

History of the Necklace

The use of single-cut diamonds on the clasp may point to the antiquity of the necklace, but the evidence is not conclusive

Nothing is known of the historical provenance of the necklace, its probable period of origin, the original owners of the necklace, and the possible origin of the pearls in the necklace. The use of single-cut diamonds in the clasp may give an indication as to its antiquity, as the single-cut was developed in the late 1300s. However, the cut persisted even after the development of more sophisticated diamond cuts, such as Rose and Briolette cuts in the 1500s, the Old Mine cut in the 1700s, the Old European cut in the 1800s, and the Modern Brilliant cut in 1919. Thus the use of single cut diamonds in the clasp may not give a clear-cut evidence for its antiquity.

The Persian Gulf is a probable source of the pearls

The size and color of the pearls may give an indication as to the species of pearl oyster from which the pearls most probably originated, and from the geographic range of the oyster the possible source of the pearls may be predicted. The range of size of the graduated pearls from 2.2 mm to 8.2 mm, agrees with the range of size of pearls produced by the most prolific pearl-producer in ancient times, Pinctada radiata, whose natural habitat was the Persian Gulf, the Red Sea and the Gulf of Mannar. White and yellow are the common colors of these pearls, with overtone colors of silver, cream and pink. Ceylon pearls from the Gulf of Mannar were renowned for their white color with silver overtones - silvery-white color. Pearls with yellowish hue were rare among Ceylon pearls. Persian Gulf pearls originating from Bahrain and other Gulf  countries also had the desirable silvery-white colors, but pearls of yellowish hue were more common. The pearls in this necklace appear to have the yellowish hue, and are most probably Persian Gulf pearls. However, it is difficult to pin-point a period for the origin of these pearls, as pearling activities in the Persian Gulf, continued until the early 20th-century, when the production of cultured pearls by the Japanese gave the final death blow to the industry.

Another probable source of the pearls is Venezuela

Another oyster species that produces pearls of the same range of size having white and yellow colors, is the Atlantic pearl oyster, Pinctada imbricata, previously thought to be a different species from Pinctada radiata, but now believed to belong to the same species. These pearls known as "Venezuelan pearls" was first discovered by Christopher Columbus in 1498 from the waters off the Island of Cubagua, and was also subsequently found off the coast of Colombia. Its natural geographic range is the western Atlantic from Bermuda and Florida to Brazil, and includes the Gulf of Mexico and the Caribbean. The Spanish set up the town of New Cadiz in the Island of Cubagua, from where the pearling activities of Venezuela were coordinated. After intensive harvesting of pearl oysters from the lucrative pearl banks off the Islands of Cubagua - which in the period 1513 to 1530 alone, was estimated to have produced 118 million pearls - around the year 1650, the pearl oyster resources seem to have been totally exhausted and the pearl harvesting industry was abandoned by the Spanish. Thus if the pearls in the four-row necklace originated in Venezuela, it must have been during the period 1500 to 1650.

Even though the four-row pearl necklace was put up for sale at the Christie's auction held in Dubai, on April 29, 2008, report No. 16532 issued by the Gem & Pearl Testing Laboratory of Bahrain that accompanied the pearl necklace, authenticating its natural provenance, was dated June 19, 2004. The discrepancy in the dates may have some significance, as whoever who owned the pearl necklace, appears to have got it tested in the year 2004, either before or after purchasing it, to make sure of its natural provenance, or having owned the necklace for a long time got it tested  in 2004, with the intention of selling it, as required by the law, but his intention eventually materialized only in 2008. Given the fact that the testing was done by a laboratory in Bahrain in 2004, seem to suggest that the owner of the four-row necklace was a national of Bahrain, or another neighboring Gulf country.

3) The Pearl of Kuwait - www.internetstones.com