The Hazen Diamond Necklace gets its name from the Late Mrs. Lita Annenberg Hazen, newspaper heiress, renowned philanthropist in medical research, and a patron of the pure sciences and the arts, who following in the footsteps of her elder sister Mrs. Janet Annenberg Hooker - a principal benefactor of the Smithsonian's NMNH who donated the US$500,000- worth Hooker Emerald Brooch to the National Museum in 1977 - donated the stunning Hazen Diamond Necklace in 1979, to enrich the national gem and jewelry collection of the Smithsonian Institution. The Hazen Diamond Necklace, not second in anyway to the Hooker Emerald Brooch in beauty, craftsmanship and value, was designed by none other than the world renowned Harry Winston Inc. who were also involved in the designing of the intricately crafted Hall Sapphire and Diamond Necklace, another stunning piece of jewerly gifted to the NMNH by Mrs. Lita Annenberg Hazen's younger sister Mrs. Evelyn Annenberg Jaffe Hall also in 1979. Hence, it is clearly evident that the Annenberg sisters Janet, Lita and Evelyn had in no small measure contributed to the building up of the Nationla Gem and Jewelry Collection, not only by donating invaluable pieces of jewelry but also contributing substantially to the construction of the ultra-modern Hall of Geology, Gems and Minerals named in honor of Janet Annenberg Hooker. Lita Annenberg (1909-1995) was the sixth of eight chidren - seven girls and a boy - born to Moses Annenberg and his wife Sadie, founder of the publishing empire, Cecilia Corporation that subsequently became the Triangle Publications, whose publications included The Morning Telegrah of New York, The Philadelphia Inquirer, the Daily Racing Form and the TV Guide magazine. Lita Hazen Annenberg's assets in 1985 was worth US$180 million and she was among the Forbes' 400 richest Americans for that year. A significant part of her inherited wealth was diverted towards medical and scientific research that benefitted human advancement. 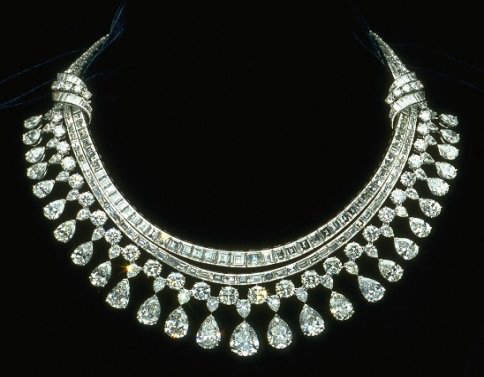 Characteristics of the Diamond Necklace

The Hazen Diamond Necklace is said to be a Statement Necklace, not because it is flashy and bold with multiple colors and color combinations but because of its elaborate and intricate design, making use of just diamonds and platinum only, but incorporating diamonds of different cutting styles such as pear, baguette, round-brilliant and emerald cuts, that bring out the fire and brilliance of diamonds. The necklace displays all the hallmarks of a Harry Winston designed piece of jewelry, such as fine craftsmanship and extremely well-matched graduated diamonds of the highest quality. 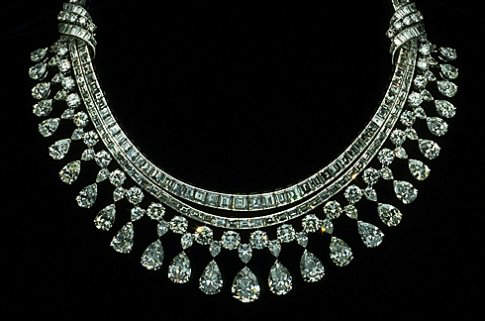 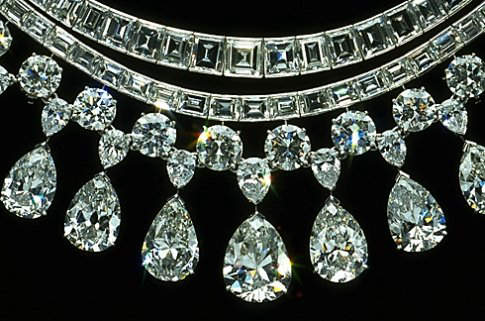 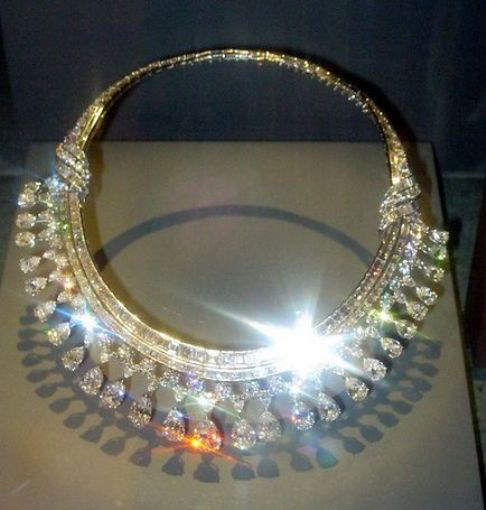 Hazen Diamond Necklace on Display at the Hall of Gelogy, Gems and Minerals of the NMNH of the Smithsonian Institution. The rear platinum neckchain of the necklace is visible in this image.

Lita Annenberg (1909-1995) was the sixth of eight chidren - seven girls and a boy - born to Moses Annenberg and his wife Sadie, founder of the publishing empire, Cecilia Corporation that subsequently became the Triangle Publications, whose publications included The Morning Telegrah of New York, The Philadelphia Inquirer, the Daily Racing Form and the TV Guide magazine. Her only brother was Walter Annenberg, publisher, philanthropist and diplomat, who took over the family business, after his father's death in 1942 and built up a successful publishing empire known as the Triangle Publications, eventually branching into other mass media, such as radio and TV. 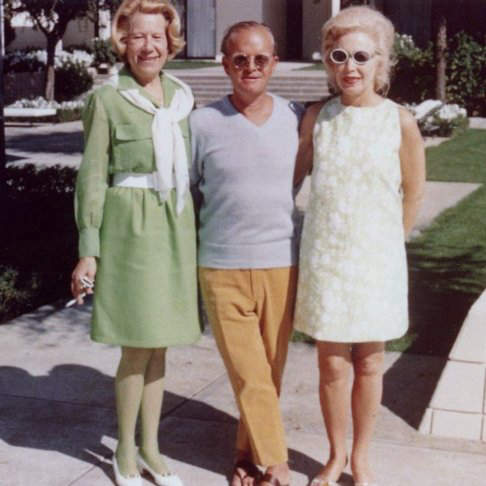 Lita Annenberg Hazen (left) with her sister Evelyn Annenberg Jaffe Hall and Truman Capote during a visit to Sunnylands, the Caifornia estate of their brother Walter Annenberg

According to the Forbes 400 Richest Americans List, pubished on October 15, 1985, the assets of six of the living members of the Annenberg family were as follows :-

Mrs. Lita Annenberg Hazen carried forward the tradition of philanthropy exhibited by the Annenberg family to a new level

Every member of the Annenberg family allocated a significant portion of their wealth towards philanthropic causes benefitting human advancement such as hospitals, medical and scientific research, the Arts and the humanities, Museums and the preservation and promotion of the study of Natural History and the Natural Sciences. Mrs. Lita Annenberg Hazen was no exception, and carried forward the tradition of philanthropy exhibited by the Annenberg family to a new level, encompassing not only the medical sciences but also the pure sciences.

Born to a Jewish family in Milwaukee on October 30, 1909, Mrs. Lita Hazen attended the Calhoun School in New York, like her sisters. In 1936, Lita Annenberg married Joseph H. Hazen, a lawyer and film producer, who was also a philanthropist and an art collector. Her marriage took place at a double ceremony in which her elder sister, Enid Annenberg, was married to the investment banker Ira Haupt.

Her philanthropic activities were channeled through the Lita Annenberg Hazen Charitable Trust set up by her in 1952, which supported medical and scientific programmes on both coasts, and made significant contributions to cultural institutions, such as the Metropolitan Museum of Art, the Museum of Modern Art, the National Gallery and the Metropolitan Opera.

Scientific Institutions that benefitted from her largesse 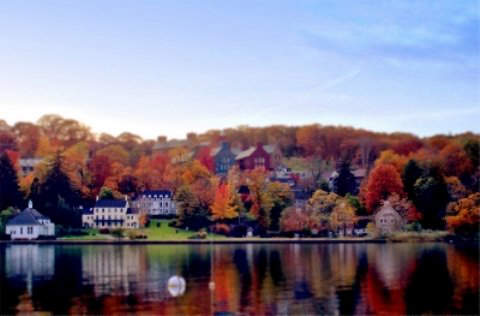 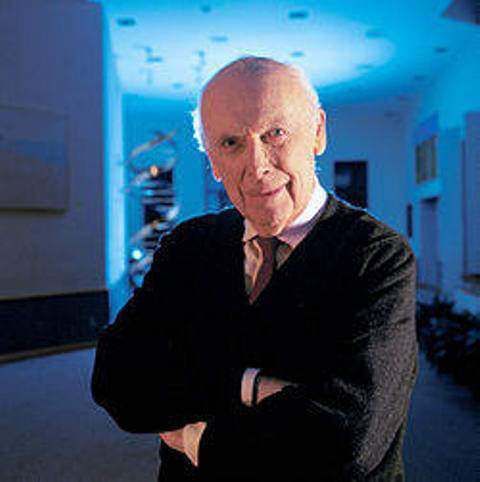 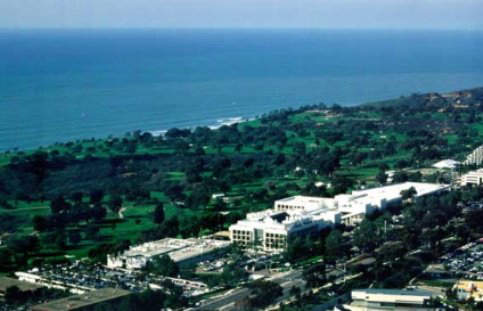 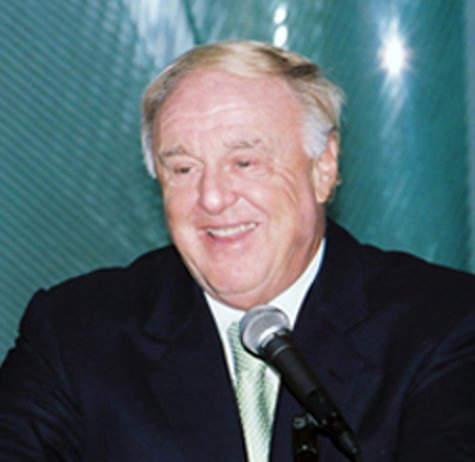 Dr Richard A. Lerner - President of the Scripps Research Institute

At the Scripps Research Institute in La Jolla, California the Hazen Trust made possible the purchase of land for a science park at the institute and also financed a chair in immunochemistry. Commenting on her passing away at the age of 85 in October 1995, Dr. Richard A. Lerner, president of the Scripps Research Institute in La Jolla, Calif, said: "She, like Mary Lasker, was one of the great ladies of American science. These kinds of individuals play important roles in science, far beyond the simple ability to donate money. In fact, they become a magnet around which scientists gather." Dr. Lerner further added, "We are losing our 'great ladies of science,' " and he noted that with their death and with no such new individuals on the horizon, "there will not be much to replace them, and a whole culture that fostered science will come to an end." 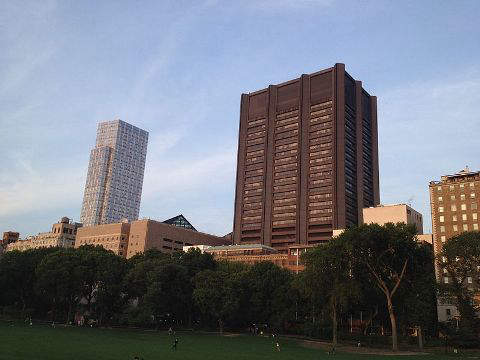 Mount Sinai School of Medicine as seen from the Central Park, New York 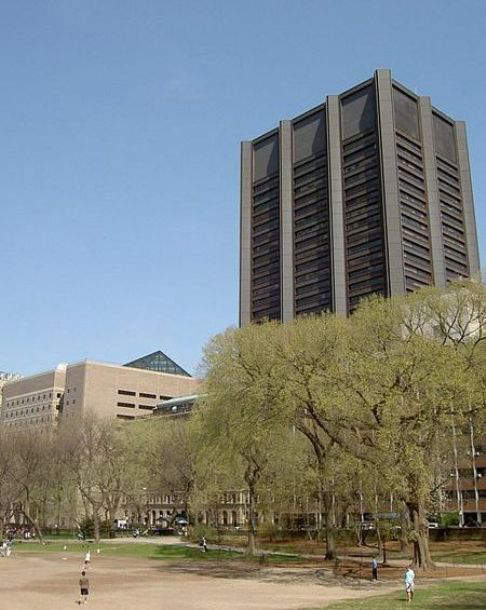 1)Financial support for a neuroendocrinology laboratory at the Mount Sinai Medical Center that was named after her.

2) A $100,000 annual award for excellence in clinical research from 1979 to 1985. The award, also named for her and administered by the Mount Sinai School of Medicine, was divided between the winner and a young medical scientist chosen by the winner.

Rockefeller University in New York was another beneficiary of her philanthropy. The Neurosciences Institute and Neurosciences Research Foundation of the University was established and financed by two grants given by her of US$1 million each.

Mrs. Hazen and her husband also established the Gwynne Hazen Cherry Memorial Laboratory in Oncology and Hematology, in memory of their daughter Gwynne Hazen Cherry, at the Marion Davies Hospital, a unit of the University of California, Los Angeles, Medical Center. Mrs. Cherry died of lymphoma in 1965 at the age of 32. 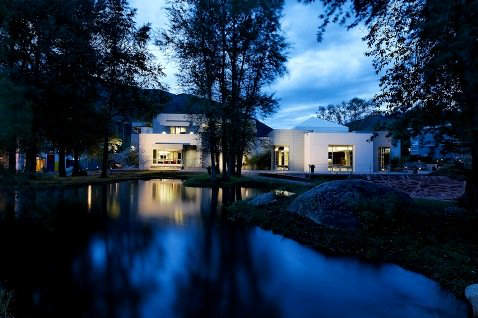 Her interest in promoting medical and scientific research did not stop with the founding of institutes and research centers, but she went a step further in organizing biomedical workshops enabling scientists and researches to meet and discuss their work. One such workshop organized by her in 1980 is biomedical workshop program at the Aspen Institute for Humanistic Studies. She also initiated a fellowship that paid for the participation of scientists, physicians and administrators. The workshops were also held at other venues, such as in Stockholm, Venice and at the University of California at Los Angeles and at San Francisco. 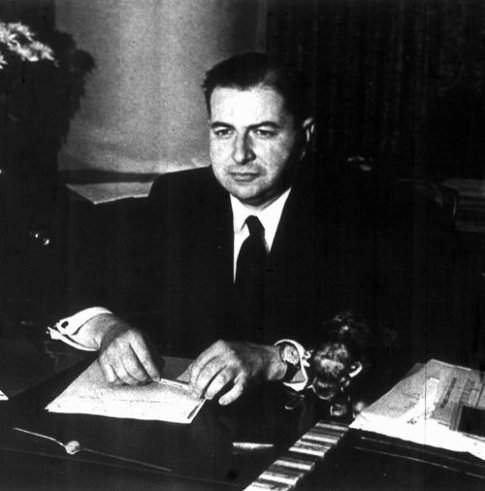 Dr. Martin Meyerson, a former president of the University of Pennsylvania who was chairman of the workshops for a decade, noted that she insured that participants ranged from Nobel laureates to junior scientists and that "she relished providing a bit of luxury to them, a good dinner, putting them up in pleasant places." 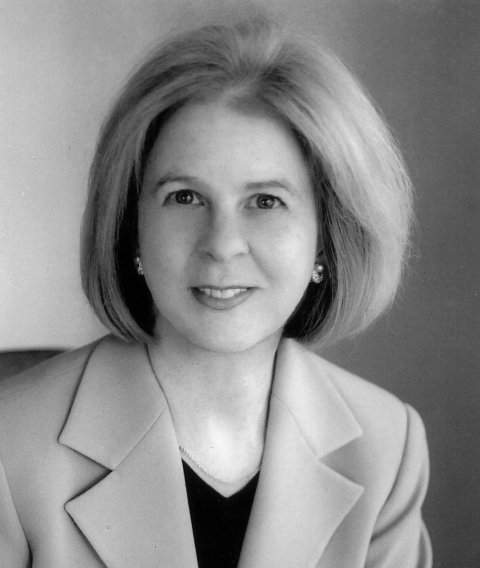 A longtime friend and professor of religion at Princeton University, Dr. Elaine Pagels summed up her enthusiam in the promotion of science and scientific research in spite of being a layman to scientific disciplines. "She had a remarkable mind, and had she been born in another generation, she might well have done something herself. She understood what research was about, even in its beginning and theoretical stage," said Dr. Pagels.

Lita Annenberg Hazen's husband Joseph H. Hazen, lawyer, film producer and art collector was a philanthropist in his own right. Mr. Hazen was a former vice president and director of Warner Brothers. He served as the film company's lawyer for 17 years and wrote the contract between Warner Brothers and Edison Vitaphone that resulted in the first movie with sound, "The Jazz Singer."

In 1944 he resigned from Warner Brothers and formed a partnership with Hal B. Wallis, the executive producer and chief of production of Warner Bros., who too had parted from the company, to form a new film company Wallis-Hazen Productions that made films like "Come Back, Little Sheba," "Gunfight at the O.K. Corral and "True Grit." During this period, from the 1940's to 60's, Mrs. Hazen spent several months each year in Beverly Hills, with her husband.

As the president of the Joseph H. Hazen Foundation, his philanthroic contributions include donations to cultural and educational institutions in the United States and Israel, the support given to hospitals including $3 million to Mount Sinai Medical Center in 1990 for outpatient cardiac care, and the support given to art institutions such as the Metropolitan Museum of Art, the National Gallery of Art in Washigton and the Museum of Modern Art. Mr. Hazen was a collector of art works himself and his eclectic art collection included works by van Gogh, Toulouse-Lautrec, Braque, Picasso, Kandinsky and Modigliani. Many of them are now on display at the Fogg Art Museum at Harvard University in Cambridge, Mass.

According to her daughter Cynthia Hazen Polsky, Mrs. Hazen's interest in art developed with her marriage to her father. Mrs. Polsky said. "My father was more passionate about art but my mother also loved museums and paintings. She was particularly interested in the Impressionists." 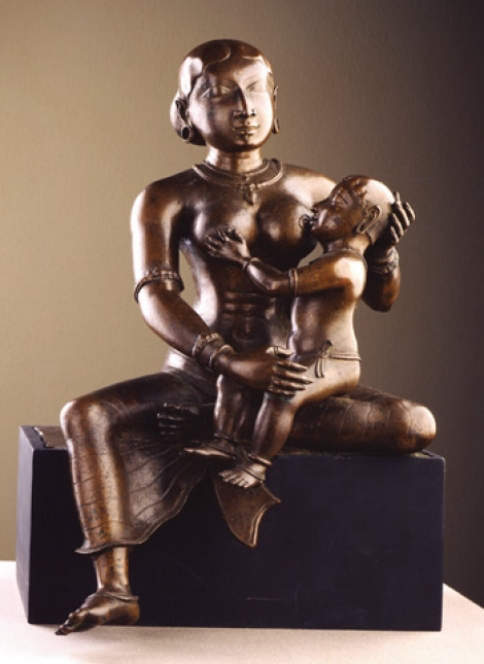 Lita Annenberg Hazen Charitable Trust made sizable contributions to arts institutions, particularly the Metropolitan Museum of Art. In most cases, the trust provided the funds for purchases, among them two important South Indian bronzes, a 12th-century "Yashoda and Krishna" and an 11th-century "Shiva, Parvati and their son Skanda," for the museum's Irving Galleries of South and Southeast Asian Art. 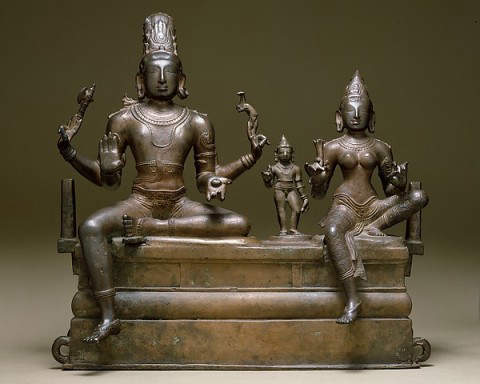 11th-century, South Indian Bronze of Shiva, Parvati and their son Skanda - at the Metropolitan Museum of Art

Joseph H. Hazen died peacefully in his sleep, in November 1994 at the age of 96 years. He had been married to Lita Annenberg Hazen for 58 years. Mrs. Lita Annenberg Hazen died the following year in October 1995, at the age of 86 years. Both of them undoubtedly left a better world than they were born into at the turn of the 20th-century, for the rest of humanity and for the future generations to come, for which they contributed in no small measure during their life time. May their souls rest in perfect peace !