The Kahn Canary diamond gets its name from Stan Kahn, of Kahn Jewelers in Pine Bluff, Arkansas, who purchased the unnamed diamond from its founder, George Stepp, a logger from Carthage Arkansas. The name of the diamond combines the name of the owner with the rare intense yellow color of the diamond, known as canary yellow. 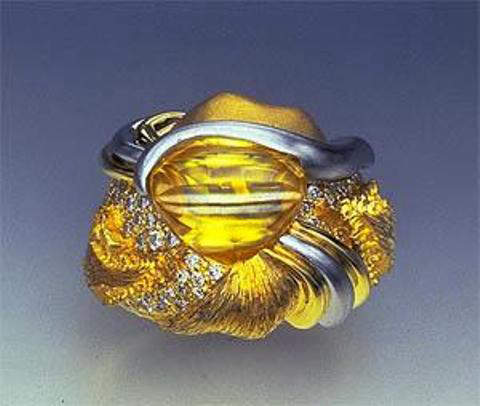 The Kahn Canary has been preserved in its natural rough state because of its unique natural dodecahedral (12-sided) pillow shape, with its rare canary yellow color, that radiates a brightness and brilliance that equals or perhaps surpasses a cut and polished diamond. The diamond appears to be flawless. The weight of the diamond is 4.25 carats. The uniqueness of the diamond in its natural uncut form has made it the unofficial symbol of Arkansas State, nicknamed "The Natural State."

Diamonds belong to the cubic or isometric crystal system.The basic crystal structure of diamond is a face-centered cubic lattice (FCC), which can build up into crystal habits, such as the six-sided cube, 8-sided octahedron or the 12-sided dodecahedron, or a combination of these shapes, such as cubo-octahedron. The most common crystal habit in diamonds is the octahedron. All these shapes are manifestations of the cubic or isometric crystal system. However,there are at least two crystal habits of diamond, that do not conform to the cubic crystal system. These are the flat triangular form called the macle, which are actually composite crystals and etched crystals, having rounded surfaces and sometimes elongated shapes. Real diamond crystals don't have completely smooth faces, but may have raised or indented triangular growths called 'trigons'.

Images of Octahedral crystals - the most common crystal habit in diamonds 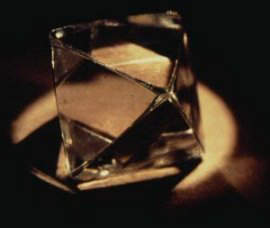 Octahedral diamond crystal - the most common crystal habit in diamonds 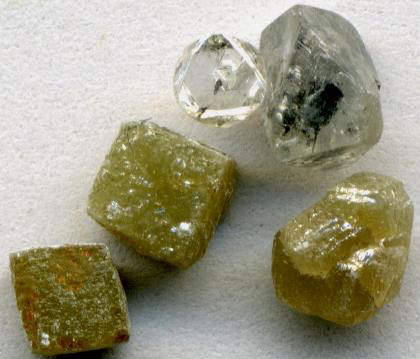 Cubic and octahedral crystal habits of diamonds from Africa 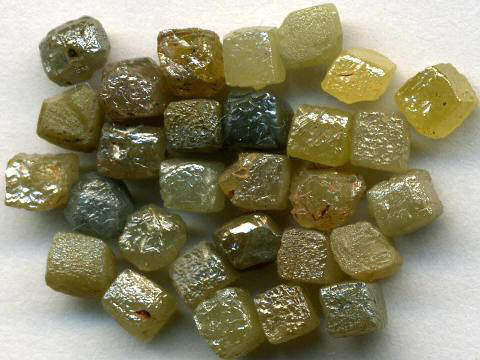 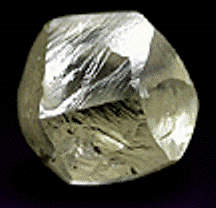 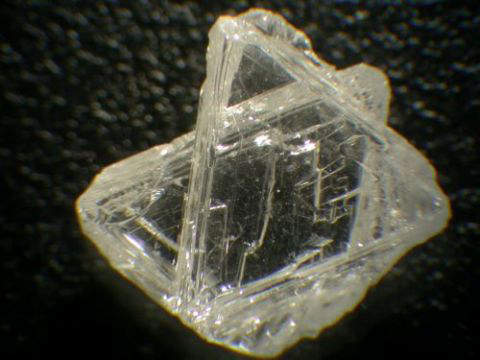 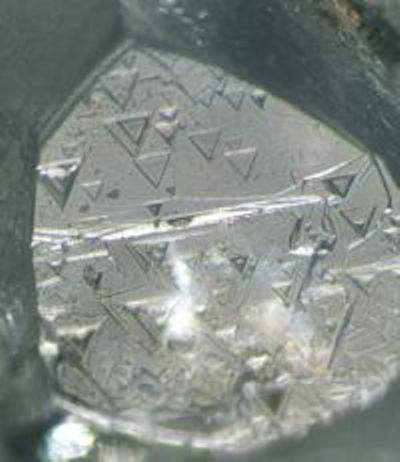 Etched trigons on the surface of diamonds

The Kahn Canary is a Type Ib diamond

Type I diamonds are sub-divided in two :- Type I a and Type I b.

The basis for this division is whether the nitrogen atoms are distributed as single atoms or groups of atoms in the crystal structure.

Type  I a :- Nitrogen atoms found as groups of atoms. 98 % of all natural diamonds belong to this group.

Type  I b :- Nitrogen atoms scattered as single atoms. Only 0.1 % of  natural diamonds belong to this group.

When nitrogen atoms are scattered as single atoms in the crystal structure, they absorb visible light in the blue end of the spectrum imparting an intense yellow color to the diamonds. The rare canary yellow belongs to this group.

Images of two of the most famous canary yellow diamonds 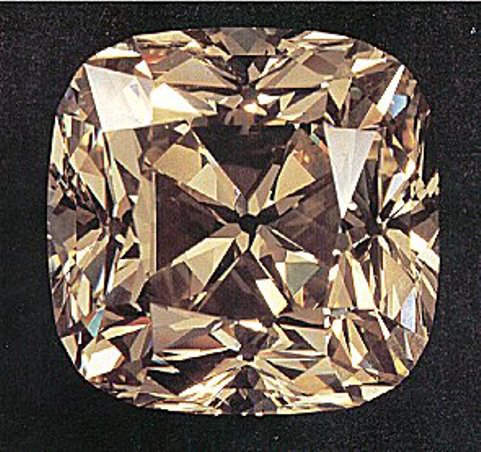 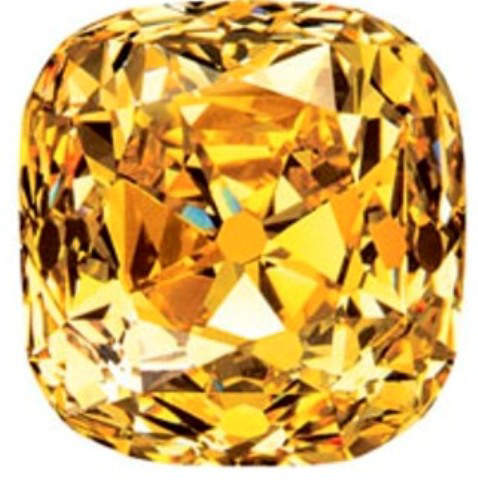 Discovery of the Kahn Canary diamond

The Kahn Canary diamond was discovered by a logger, George Stepp of Carthage, Arkansas, in the Crater of Diamonds State Park, near Murfreesboro, Arkansas, in 1977. Crater of Diamonds State Park, is the world's only publicly-owned diamond prospecting site, where visitors are allowed to search for diamonds and other gems, for a fee, and keep what they find, regardless of the value of the gems. This liberal policy adopted by the State Authorities, had yielded rich dividends, by boosting tourist attractions to the  State, and the park undoubtedly has become the State's biggest tourist attraction. One is but compelled to compare this liberal policy with the situation that prevailed in South Africa, in the early days of diamond prospecting, when individual diamond prospectors and diggers were subjected to exorbitant and arbitrary taxes on their finds, which tended to discourage mining and hide the valuable finds.

The search area of the Crater of Diamonds State Park is a 36 ½ acre site, which is believed to be the eroded surface of a gem-bearing volcanic pipe known as the Prairie Creek Kimberlite pipe. Kimberlites, which are a type of igneous rock are mica Peridotites that are found in pipes. They are rare occurrences in cratonic (stable), areas of the earth's crust. The stable interiors of South Africa and Siberia have wide spread occurrences, but these pipes are also found in North America, Australia, Brazil, and India. Not all Kimberlites contain diamonds. When diamonds do occur, they constitute less than one part per million of the rock. Later research revealed that the diamond bearing reserve or pipe is shaped like a martini glass, which is consistent with a Lamproite pipe, even though it is commonly referred to as a Kimberlite pipe. The Argyle diamond mine is also believed to be a Lamproite pipe.

In the Crater of Diamonds State Park, besides diamonds other precious and semi-precious stones such as garnets, amethysts, agate, jasper, quartz etc, have also been found.

Stanley Kahn purchases the rough unnamed diamond from George Stepp, and decides to preserve the rare diamond in its natural state, for the sake of posterity

George Stepp sold the unnamed diamond to Stanley Kahn, proprietor of Kahn Jewelers in Pine Bluff, Arkansas. Mr. Kahn a connoisseur of diamonds, was impressed by the natural beauty of the stone, with its rare dodecahedral pillow shape, vibrant canary yellow color and the almost flawless clarity, that he decided to preserve the stone in its uncut natural state, a bold decision not motivated by profit, but with the pure intention of preserving the diamond for posterity.

Stanley Kahn consults Henry Dunay expert jewelry designer from New Jersey, and the result was the extraordinarily beautiful ring setting that graced the fingers of First Lady Hilary Rodham Clinton on more than one historic occasion

Yet, Mr.Kahn believed that the 4.25-carat natural rough diamond, might be an ideal centerpiece for a ring setting, and he lost no time in contacting his friend and talented designer, Henry Dunay, who was invited to his store to the study the diamond, and give his suggestions. Henry Dunay, who hailed from New Jersey, had a wealth of experience in designing jewelry, having served a seven-year apprenticeship period, under a master goldsmith. Henry Dunay respected the decision of Stanley Kahn to preserve the diamond uncut in its natural state, and agreed to create a ring setting that would bring out its natural beauty,wihout comprising the natural credentials of the stone. The result was the extraordinarily beautiful ring setting, in 18k gold and platinum, depicted in the photograph above, that graced the fingers of the First Lady of the United States of America, Hilary Rodham Clinton, on more than one historic occasion. 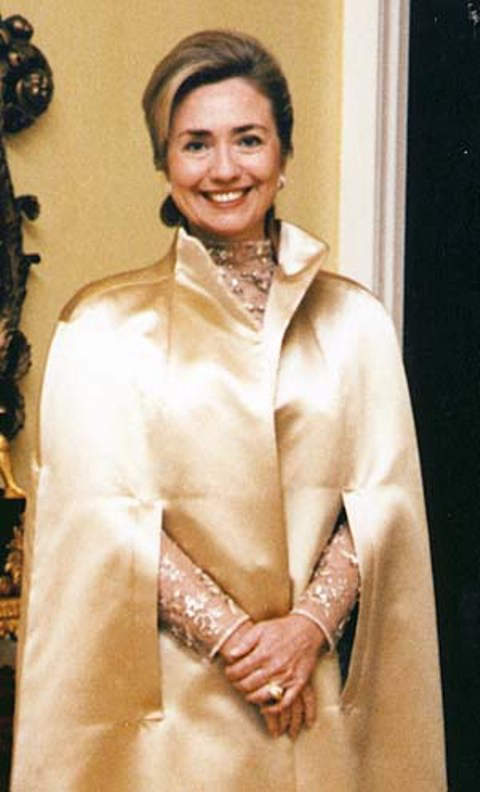 Mr. Stanley Kahn lent the Kahn Canary diamond ring, custom-designed for Mrs.Clinton, to wear on three ceremonial historic occasions; her husband Bill Clinton's inauguration as the Governor of Arkansas, and subsequently the inauguration of Bill Clinton as the President of the United States of America in 1993 and 1997. Mrs Hilary Clinton's decision to wear the Khan Canary diamond ring on these historic occasions, was most appropriate as the diamond originated in Arkansas, and served to highlight Arkansas as a state blessed with rich natural resources.

Composition and Properties of Diamonds

2) Diamond - From Wikipedia, the free encyclopedia

5) Composition and Properties of Diamonds - www.debeersgroup.com