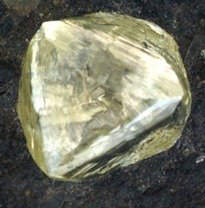 The diamond has been preserved in its natural octahedral state, and is a yellow diamond with a weight of 616 carats. As the diamond remains uncut the usual color and clarity grades and type of cut applicable to cut and polished diamonds do not apply for this diamond. The diamond still being in its natural state can only be described in terms of its shape (octahedral),  color (yellow) and weight (616 carats).

The diamond being yellow is a Type I diamond, in which the yellow color is caused by the presence of trace quantities of nitrogen impurities in the crystal structure of the diamond. Nitrogen atoms absorb visible light in the blue region of the spectrum causing its complementary color yellow to appear. However it is not possible to characterize the diamond as Type Ia or Type Ib, as the exact color grading of the diamond is not known, since it still remains un-cut. The intense shades of yellow such as fancy intense and fancy vivid come under Type Ib, but these diamonds are very scarce constituting only about 0.1 % of all naturally occurring diamonds. The canary yellow diamonds also belong to this rare group. The remaining shades of yellow such as fancy yellow, fancy light yellow, light yellow, very light yellow, and faint yellow all belong to Type Ia, which constitute almost 98 % of all naturally occurring diamonds.

The diamond was discovered in 1964 in the Dutoitspan Mine, in the Kimberley region of South Africa, and was a large naturally formed yellow octahedral crystal. The rough diamond was so enormous, and turned out to be the largest octahedral diamond crystal ever discovered. The owners of the diamond De Beers Consolidated Mines Ltd., who were aware of the rarity of this exceptional find decided to preserve it for the sake of posterity, as the chances of finding  a similar diamond of such enormous size was extremely remote. The diamond is today exhibited in the "Diamond Vault" of the visitors center of the "Kimberley Big Hole" together with the "Eureka Diamond" the first diamond to be discovered in South Africa on the banks of the orange river in 1867.

History of the Kimberley Big Hole

After the  discovery of diamonds on the farm of Nicholas and Diederick De Beer between 1867 and 1871, two diamond mines were dug on the farm, the Kimberley and the De Beers diamond mines in 1871, which eventually became the most productive diamond mines in the world. The site of the Kimberley Mine was originally a flat topped hill. When the word got around that diamonds were discovered on the site thousands of prospectors armed with the simplest of tools like picks and shovels descended on the site and began digging. The diamond bearing soil that was brought up was sorted for diamonds using traditional techniques. Eventually the site became one of the largest hand-dug excavation sites in the world. 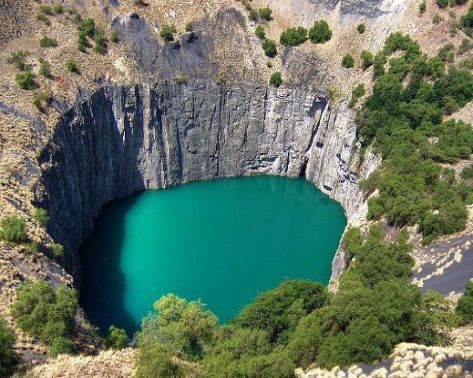 More organized mining activities at the site were introduced after operations at the mine were taken over by the mining companies. New mechanical digging and sorting methods were developed and introduced at the mines. The Kimberley mines was the pioneer that developed the new techniques of mining and extracting diamonds. Although the modern methods of mining and extracting diamonds have undergone tremendous improvements, they still retain the same basic methods that were developed at Kimberley. The Kimberley diamond mines also pioneered the techniques of deep underground mining.

Geologists who studied the deep underground mine at Kimberley discovered that deposits of diamond in the deep mine were actually ancient volcanic pipes, which had brought diamonds to the surface from below the earth's crust where they were produced. They called these pipes Kimberlites. Thus for the first time geologists came to know that primary deposits of diamonds were ancient volcanic pipes. Before this discovery it was assumed that diamonds were found only in the rivers and river basins, as it was in India and Brazil. How the diamonds came to be deposited in the river basins was a mystery. But, now we know that it was the erosion of the ancient Kimberlite pipes in the hilly areas surrounding the rivers that brought the diamonds down to the river basins where they were deposited as alluvial deposits.

Total production at the Kimberley Mines

The Kimberley mine which started production in 1871 ended operations in 1914. During the 43-year period of its operation it has been estimated that the mine produced 22.5 million tons of diamond-bearing earth, that yielded 2,722 kilograms of diamonds equivalent to 13,610,000 carats.

Conversion of the abandoned Kimberley Mines into a tourist attraction

Today the abandoned Kimberley Mine has been converted into a tourist attraction, known as the Big Hole, Kimberley. The various sections of this center include the viewing ramp, the exhibition center, the pulsator shed, underground mine shaft, the cinema and the diamond vault.

The viewing ramp is an elevated platform 30 feet by 30 feet, from where visitors have an opportunity of observing the big hole directly from above and appreciate its remarkable scale and grandeur. This is the highlight of their visit to the Big Hole and provides them with a unique and unforgettable experience.

The exhibition center contains photographs, materials from archives, and artifacts, that tell the story of diamonds from the past to the present. The exhibits in the center reveal the myths and legends that were associated with diamonds, believed in ancient times to have mysterious powers. It also shows the colonial history of South Africa and other countries of southern Africa, and the impact of the discovery of diamonds on these nations. The exhibits cover all aspects of the diamond industry, such as the historical, chemical, geological and  engineering aspects, and are very informative and educative.

The pulsator shed houses equipment used in the past for the processing of diamond ores, such as jigging machines and grease tables, that separated the diamonds from the ore. Visitors can also have an interactive experience of sorting and selecting diamonds in the pulsator shed.

Visitors are also given the privilege of having some first hand underground mining experience and appreciating the perilous 19th century mining conditions, by entering a recreated mine shaft of that period.

Visitors are also given the opportunity of viewing a short film depicting the story of diamonds in Kimberley, in an air-conditioned, state-of-the-art, 65-seat theatre.

The diamond vault is a specially constructed room in the Big Hole facility where a collection of real diamonds of all varieties such as colorless diamonds, yellow diamonds, brown diamonds, and other fancy colored diamonds are exhibited. Some of the famous gems on display are the 616 Kimberley Octahedral Diamond, the largest naturally formed octahedral diamond in the world and the 10.73-carat, cushion-cut, brownish-yellow brilliant known as the Eureka, the first diamond to be discovered in South Africa on the banks of the Orange river in 1867.