The Kimberley Diamond is a rare 19th-century diamond, discovered as a 490-carat rough diamond crystal from the Kimberley diamond mine, the largest of the mines in the Kimberley region, where digging started in 1869, after the first diamonds were discovered on the slopes of Colesberg inselberg (kopje) in that year, by a group of prospectors known as the "Red Cap Party," on the farm "Vooruitzigt" belonging to Nicolas and Diederick de Beer. The diamond was probably discovered during the diamond rush that was sparked by the 1869 discovery of an 83.50-carat diamond, that led to the cutting of 800 claims into the hillock, worked frenetically by 2,000-3,000 men. The hillock decreased in height and disappeared, and the flat land became a mine, the renowned Kimberley mine, that increased in depth after open pit mining, and eventually became the "Big Hole," an alternative name for the Kimberley mine. The 490-carat rough diamond crystal was christened the "Kimberley Diamond" after the historic Kimberley mine in the Northern Cape Province of South Africa where the diamond was discovered. 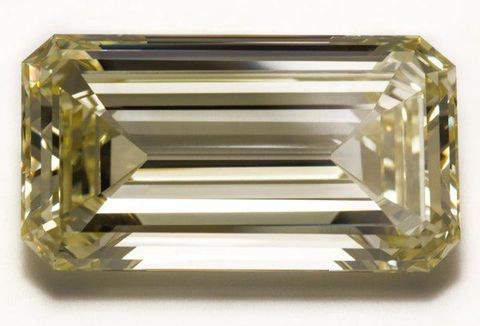 The Kimberley diamond when it was first discovered somewhere between 1869 and 1871, was a 490-carat, champagne-colored (pale orange-yellow to grayish-yellow) rough diamond crystal. According to the GIA publication, "Diamonds - Famous, Notable and Unique" the Kimberley rough diamond that once belonged to the Russian Crown Jewels, was a large somewhat flat stone, cut into a flawless, 70-carat, step-cut, champagne-colored diamond in 1921.


The 4Cs of the diamond after its second cutting by Baumgold Bros. of New York in 1958

The historic diamond was subsequently acquired by Baumgold Bros., New York City's, Fifth Avenue based, renowned diamond cutting and fine jewelry company, who got the diamond re-cut in 1958, into its modern emerald-cut form, enhancing its proportions and brilliance and weighing 55.09 carats.
Hence, the Kimberley diamond as it is at present is an emerald-cut, champagne-colored, flawless diamond weighing 55.09 carats. 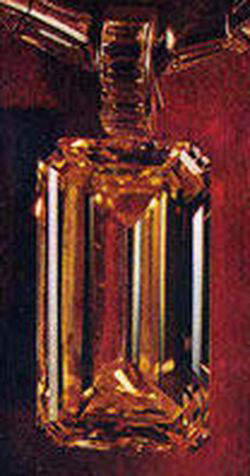 When was the "Kimberley Diamond" actually discovered ?

The Kimberley Diamond is believed to have been discovered at the Kimberley mine in the Northern Cape Province of South Africa, probably during the diamond rush that was  triggered after the discovery of the 3rd diamond in South Africa in 1869, an 83.50-carat rough diamond, on the slopes of Colesberg kopje, by a group of prospectors known as the "Red Cap Party" on the farm "Vooruitzigt" belonging to Nicolas de Beer and Diederick de Beer. The diamond rush, characterized as a virtual stampede by historian Brian Roberts, came to be known as the "New Rush" and the brothers Nicolas and Diederick de Beer, unable to protect their farm from the thousands of prospectors, sold it for £6,300. The name "Vooruitzigt" was transformed into "New Rush" and later by proclamation of the Colonial Secretary in July 1873 to "Kimberley," the name derived from the name of the Secretary of State for the Colonies, at that time, Lord Kimberley. Within a short period of about one month, more than 800 claims were cut into the hillock, by 2,000 to 3,000 men, and the height of the hillock gradually decreased. The Kimberley Diamond was probably discovered from one of these claims cut into the hillock during the "New Rush" somewhere between 1869 and 1871, prior to the arrival of Colonial Commissioners in New Rush on November 17, 1871, to exercise authority over the territory on behalf of the Cape Governor. The territory that was known as Griqualand West was eventually annexed to the Cape Colony in 1877, after compensating Orange Free State and Transvaal for their competing claims to the diamond fields. 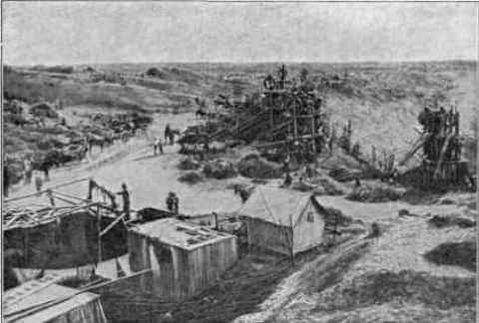 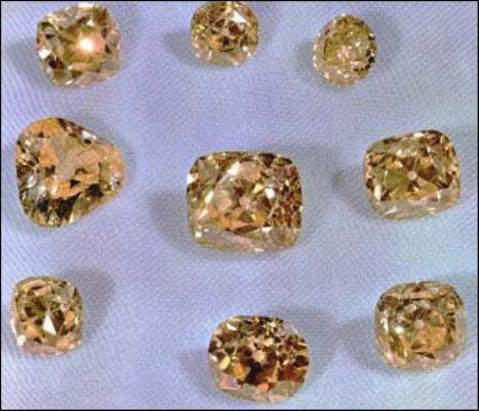 Some Cape Series diamonds purchased by Nasser-din-Shah in 1889

The Kimberley Diamond at the time of its discovery was a 490-carat, champagne-colored, rather elongated flat crystal. During the early years of diamond production in South Africa, from the 1860s to the 1890s, the diamonds produced were mainly of different shades of yellow and brown or a combination of the two, and were known as the Cape series of diamonds. Hence, the champagne-colored Kimberley Diamond, also belonged to the Cape series of diamonds.These diamonds were initially considered to be inferior in quality and fetched lower prices than conventional white or colorless diamonds, in the diamond markets across the world. The popularity of these diamonds received a boost in 1889, when the Iranian monarch Nasser-ed-Din Shah (1848-1896) visiting Europe. purchased large quantities of these hitherto under-rated diamonds. The diamonds of the Cape series originated mainly in the first two deep diamond mines dug on the farm, that previously belonged to Nicolas and Diederick de Beer, known as the Kimberley and De Beers diamond mines, which were at one time the world's most productive mines. Hence, the fact that the Kimberley Diamond is champagne-colored, provides indirect evidence for its origin and supports the belief that the diamond originated in the Kimberley diamond mine. 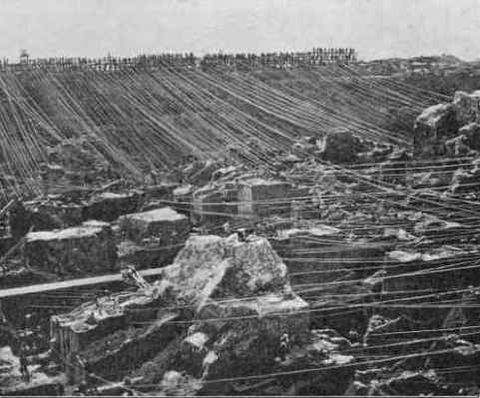 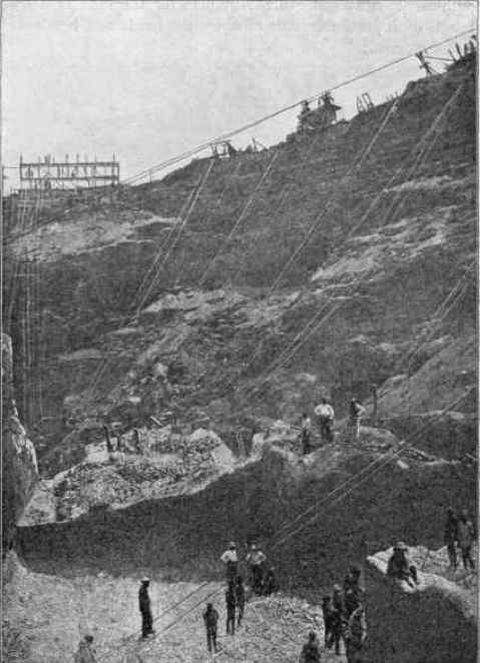 Section of Kimberley mine in 1874

How did the Kimberley rough diamond enter the Russian Crown Jewels ?

The Kimberley rough diamond is believed to have been part of the Russian Crown Jewels. If this information is correct, the next question that arises is, how did the rough diamond enter the Russian Crown Jewels ? In the late 19th-century, from the 1860s to the 1890s, the City of Amsterdam in Netherlands, was the main diamond cutting center in Europe, a pre-eminent position enjoyed by this city since the 17th-century, when the Dutch East India Company was in control of the diamond producing areas of the Indonesian archipelago. Large quantities of rough diamonds discovered from the newly opened mines in South Africa in the late 19th-century, reached Amsterdam, where they were cut and processed by the thousands of highly skilled Jewish diamantaires settled in the city, before they were dispatched to the international diamond markets around the world. Hence, in all probability the 490-carat, champagne-colored Kimberley rough diamond too reached Amsterdam, but was not cut and processed, probably because of the elongated, flat shape of the diamond, not suitable for the old European cut, the forerunner of the modern brilliant cut and the most advanced and popular cut during the 19th-century. The uncut rough diamond was eventually purchased by the agents of the Tsar of Russia, either in Amsterdam or another European capital, such as London, Paris or Rome.

Posible period during which the Kimberley rough diamond would have entered the Russian Crown Treasury ?

The next question that arises is, during which Tzar's period did the Kimberley Diamond enter the Russian Crown Treasury, the forerunner of the Russian Diamond Fund, housed in the Diamond Chamber of the Winter Palace at St. Peters-burgh. Between the period diamonds were first discovered in South Africa in the 1860s and the Tzardom was overthrown by the Bolshevik revolution in 1917, there were three Tzars who ruled Russia, and the Kimberley rough diamond could have entered the Russian Crown Jewels during the period of rule of any one of them. These Russian Emperors were, Tsar Alexander II, who ruled from 1855 until he was assassinated in 1881; Tzar Alexander III, son and successor to Alexander II, who ruled from 1881 until his death by natural causes in 1894; and Tzar Nicholas II, son and successor to Alexander III, who ruled from 1894 until his abdication following the February revolution of 1917.

Had the Kimberley diamond, entered the Russian Crown Jewels as normally presumed, what are the prospects that the diamond would have re-entered the western diamond markets and eventually purchased by an anonymous buyer in the west, who got the rough diamond cut and polished into the flawless, 70-carat step-cut diamond, in 1921 ?

It is quite possible that the Kimberley rough diamond was the property of a Russian aristrocrat and reached the west during the upheavals of the 1917 Bolshevik revolution, where it was purchased by an anonymous buyer who got it cut and polished into the 70-carat, step-cut, champagne-colored, flawless diamond in 1921

However, the finding that the Kimberley rough diamond was not part of the Russian Crown Jewels does not preclude the possibility that the diamond would have been the personal property of either the Tsars or Tzarinas of Russia during this period, or an aristocratic family related to the Russian Royal Family, who held the titles of Prince or Princess, Grandduke or Grandduchess and Duke and Duchess. During the upheavals of the October 1917 Bolshevik revolution, those among the royal family or other aristocratic families, who were lucky enough to escape from Russia, carried with them their personal valuables, that included their personal jewelry collections, and other valuables such as diamonds, pearls and gemstones. Some of these valuable pieces of jewelry that reached the western markets during this period are :- Catherine the Great Pearl Necklace; Grandduchess Vladimir Tiara; the 42.92-carat, fancy blue, pear-shaped Tereschenko diamond; 133.16-grain La Pelegrina Pearl; the 35.27-carat, cushion-cut, fancy greyish-blue Sultan of Morocco diamond and the 40-carat, round brilliant-cut Polar Star diamond. Hence, it is quite possible that the 490-carat, champagne-colored Kimberley rough diamond that perhaps belonged to the private collection of a Russian aristocrat, also reached the western markets during the upheavals of the 1917 Bolshevik revolution, and subsequently purchased by an anonymous buyer in the west, who got the rough diamond cut and polished into the 70-carat, step-cut. champagne-colored, flawless diamond in 1921. 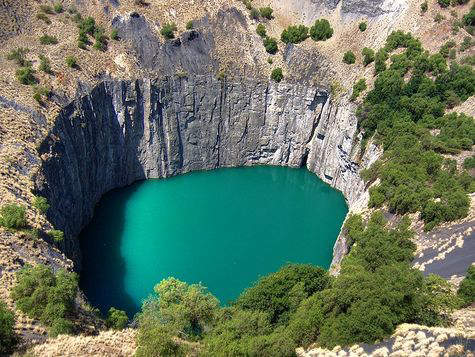 Kimberley Open Pit Mine - The Big Hole, after it was abandoned in 1914

The Kimberley Diamond is acquired by Baumgold Brothers of New York City, the renowned diamond cutting and fine jewelry company, who re-cut the diamond in 1958 into its present form, a 55.09-carat, well proportioned emerald-cut, flawless, champagne-colored diamond

The 70-carat, step-cut, champagne-colored, flawless Kimberley Diamond was then acquired from its anonymous owner, by the renowned New York based diamond cutting and fine jewelry company, Baumgold Brothers, who in 1958 decided to re-cut the diamond, with a view of enhancing its proportions and brilliance. Accordingly, in 1958, the master cutters of the company recut the diamond, into its present form, a 55.09-carat, emerald-cut, flawless, champagne-colored diamond, with perfect proportions and brilliance - one of the most perfectly cut emerald shaped diamonds in the world. At that time the company valued the diamond at US$ 500,000.

The Kimberley Diamond is exhibited several times at the American Musem of Natural History, and returned home to South Africa in 1966, where it was exhibited at the Diamond Pavilion of Johannesburg

Since its re-cutting in 1958, the Kimberley Diamond has been widely exhibited, in museums, such as the American Museum of Natural History, New York, where Baumgold Brothers' other creations such as the 111.59-carat "Earth Star" diamond and the 21.90-carat, pear-shaped, uniqe "Flaming Star" diamond were also exhibited. The "Flaming Star" diamond has the finest white color under normal light, but glows with an intense brilliant orange, under ultraviolet light. The "Kimberley Diamond" returned home in 1966, when it was exhibited at the Diamond Pavilion in Johannesburg, South Africa.

In 1971, Baumgold Brothers sold the diamond to Bruce F. Stuart, the great-grandson of Carnation Company founder Elbridge Amos Stuart, the American Milk Industrialist and creator of Carnation evaporated milk, who marketed his products with the famous slogan " Carnation Condensed Milk, the milk from contended cows." The diamond was subsequently placed in the Bruce F. Stuart Trust, from where the diamond was loaned again to the American Museum of Natural History, to be exhibited to the public from July 2013 to June 2014.

You are welcome to discuss this post/related topics with Dr Shihaan and other experts from around the world in our FORUMS (forums.internetstones.com)
Back to More Famous Diamonds

5) The Big Hole - From Wiipedia, the free encyclopedia.