The origin of the 88-carat black Korloff Noir diamond is shrouded in mystery, but according to legend seems to have originated in Russia, and owned by several generations of the Karloff-Sapozhnikov family, from whom the diamond gets its name. The present owners of the diamond are the Korloff Jewelers of France, founded in 1978, who took the name of their company from the diamond. 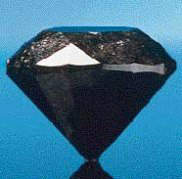 Black diamonds also known as Carbonado are different from conventional diamonds in respect of origin, structure, composition, and also distribution. A comparison of the characteristics of the two types of diamonds are given below.

The origin of this 88-carat black diamond is not exactly known, but according to legend seems to have originated in Russia, and eventually came to be owned by several generations of a Russian noble family, by the name of Karloff-Sapozhnikov, who lived in St. Petersburg. According to legend, the Korloff diamond brings happiness, luck and prosperity to any person who has the privilege of touching it.

The diamond is believed to have been sold by the Karloff family in the 1920s, to a diamond dealer, probably from Paris. A lot of jewels and jewelry belonging to the Russian nobility eventually found their way to the jewelry dealing firms of Paris, after the Bolshevik Revolution of 1917. After five decades, in the 1970s the Korloff diamond was purchased by the present owner of the diamond, the French jeweler, Daniel Paillasseur, who in 1978 founded a jewelry company and decided to name it after this diamond, whose magic and mystery had always fascinated him. Today the black  Korloff  diamond has become the soul and symbol of Korloff Jewelers, a company based in Lyon, France, with a world wide network of import agents, multi-brand dealers, partner shops, and company's own retail outlets, marketing designer jewelry, Swiss watches, haute couture, and accessories. Within the last 29 years the company has grown into a mighty international jewelry empire, with 45 exclusive boutiques worldwide and more than 450 points of sale. Perhaps, the legendary diamond owned by the company seems to have had a beneficial effect on the company, leading to its phenomenal growth within this short period !!!

Korloff Jewelers introduced a new diamond cut to the industry recently, known as the Korloff-cut, the ultimate result of many years of research and calculations. This is an exceptional octagonal diamond cut with 65 facets, 41 of which are on the crown and the remaining 24 on the pavilion. The advantage of this cut is that it enhances the brilliance and glitter of diamonds, because it allows as much light as possible to penetrate the heart of the stone. All diamonds produced by the company, of whatever size, conform to this new scientific cut, and the company is determined towards its perpetuation and popularization worldwide.

The Korloff Noir diamond has been exhibited on several occasions in different countries of the world to coincide with the opening of Korloff sales outlets or boutiques.

The diamond was displayed on the first three days of the Jewelry Arabia Exhibition, held at the Bahrain International Exhibition Center, in October, 2003, to mark the 10th anniversary of Jawaher Asil Company, the Bahraini agents for Korloff Jewellers.

The diamond was exhibited at the second Haute Joaillerie Fair held at the Beirut's Phoenicia Inter-Continental Hotel, in November 2003.

The diamond was again exhibited on December 18, 2003, at Moscow's prestigious trade center, "Crocus City Mall," in connection with the opening of Korloff Paris boutique in Moscow. The diamond was said to be insured for $ 37 million, and was presented by Russia's famous figure skater Marina Anisina, the official face of the Korloff Company in Russia. The diamond was transported from France to Russia, by special air plane accompanied by armed guards and representatives of the Korloff Company. From the Moscow airport the diamond was carried to the Crocus City Mall in a special bulletproof car, followed by a helicopter from above until the diamond reached its destination. The Korloff Diamond was exhibited inside a bulletproof glass case, under the constant supervision of armed security guards.

Korloff Paris opened its first boutique in the United States, at the Gateway in Salt Lake City, Utah, in March 2007, but the official grand opening of this flagship boutique was held on November 23rd and 24th, 2007. To mark this occasion the 88-carat Korloff Noir diamond was specially flown in from Paris, under tight security precautions. The diamond was escorted by police in an armored vehicle from the Salt Lake City International Airport, to the Korloff boutique, at the Gateway. The diamond was displayed to the public on November 24, 2007, from 4 p.m. to 10 p.m. inside a bulletproof glass case under constant watch by armed security guards.

Mystique of the Korloff Noir diamond

Comparison of characteristics of conventional diamonds and black diamonds

Two scientists from Florida International University, Jozsef Garai and Stephen Haggerty, have proposed in a paper published in the Astrophysical Journal, of December 20th, 2006, that black diamonds found in the world today are of extra-terrestrial origin. The evidences they have given for such a view are :-

1) Black diamonds are never found in Lamproite or Kimberlite pipes. They are always found in alluvial deposits only. Therefore black diamonds did not originate deep inside the earth's mantle like conventional diamonds.

3) Black diamonds are found only in two countries in the world today, Brazil and Central African Republic, which were in close proximity to one another, before the continental drift, billions of years ago. Carbonados were formed in stellar supernova explosions, and some of them were as large as asteroids, a kilometer or more in diameter. One such Carbonado asteroid impacted the earth's surface in the region of Brazil and Central Africa, billions of years ago, before the continental drift started.