The origin of the name La Favorite is shrouded in mystery just as much as the early history of the diamond itself. The name perhaps reflects the quality of the diamond, which is better than all others of the same kind.

The diamond was a 50.15-carat, D-color, emerald-cut, potentially flawless stone set in a ring by Bulgari. The qualification potentially flawless referred to its clarity, which was very very slightly included (VVS) 1 or 2, and could have been improved by a slight re-cutting. 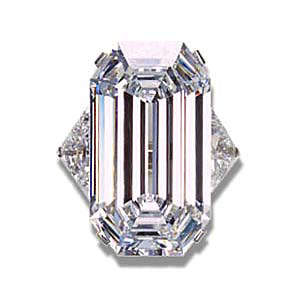 The La Favorite diamond, being a D-color diamond is a Type IIa diamond, which are said to be the "purest of the pure" of all diamonds. They are chemically pure and structurally perfect diamonds. They are chemically pure because of the absence of impurities such as nitrogen, boron and hydrogen atoms in the crystal structure, that can impart color to the diamonds. They are structurally perfect because of the absence of plastic distortions in the crystal, which can also induce rare fancy colors to the diamonds such as pink, red, and purple colors and also brown. Thus in the absence of all factors that can cause color in diamonds, these diamonds are absolutely colorless. Besides the D-color diamonds, E & F color diamonds which are also absolutely colorless according to the GIA color grading scale, may also come under Type IIa.

The diamond is of South African origin, but other details of the early history of the diamond such as the mine of origin, date of discovery, weight of the rough stone, original owner of the diamond, person or company involved in the cutting etc. are not known. The cut and polished diamond first made its appearance in 1934 at the Chicago World Fair, when the diamond was said to have been owned by a collector from Persia (Iran). At that time the value placed on the diamond was $ 1,000,000.50.

The year 1934 was when the United States and the world was in the midst of the Great Depression, a period of harsh adversity precipitated by a worldwide economic downturn, causing drastic declines in output, severe unemployment and acute deflation. In spite of the depression, the La Favorite diamond became a sensation at the World Fair, and long queues formed with people waiting patiently to take their turn to view the rare and unique diamond.

The diamond appears to have changed hands in the 1960s when it was acquired by a Frenchman. The diamond next made its appearance over thirty years later, in April 2001, at a Christie's Magnificent Jewels auction held in New York, in which over $ 21 million worth of jewels equivalent to 83% of the lots were sold. The top lot of the sale was the La Favorite diamond, the 50.15-carat, D-color potentially flawless, emerald-cut diamond, set as a ring by Bulgari. After competitive bidding the diamond was purchased by Laurence Graff of Graff Diamonds, London. The purchase price of the diamond was $ 3,636,000.

After purchasing the diamond Laurence Graff has got the it slightly re-cut to make it a perfectly flawless diamond. The present weight of the diamond is 50.01 carats, a reduction of 0.14 carats. The diamond is now set in a new ring setting by Graff.

Laurence Graff is described as not only a merchant of brilliants but also a brilliant merchant. The Graff business empire was founded by Laurence Graff, the "King of diamonds", who is said to have had a passion for diamonds from an early age. Graff is reported to have made the following comments on one occasion. "Diamonds excite me; diamonds are my life. I see inside the stone; look at the color; and cut and assess its natural beauty and value. I was born to be amongst diamonds." Laurence Graff has set an unsurpassed standard of excellence and innovation in the industry, and it is said that more important gem-quality diamonds have passed through his hands than any other living dealer. Some of the stones are centuries old and steeped in myth and history; while others have just been discovered and brought to life in Graff's own workshops.