The name of the diamond is a combined one that seems to reflect partly the country of origin of the diamond, Lesotho, and partly the color of the rough diamond. The accidental discovery of this massive 601-carat diamond in 1967, eventually led to a more organized exploitation of the Kimberlite pipe situated in the Maluti mountains of Mokhotiong, that came to be known as the Lets'eng diamond mine. 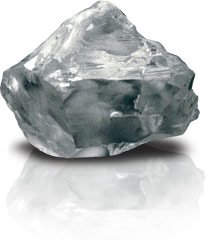 Harry Winston who purchased the massive rough diamond in 1968, cleaved it into 18 pieces, which were polished into 18 diamonds. The largest of this piece known as the Lesotho I, was an emerald-cut flawless diamond, weighing 71.73 carats, and a beautiful pale pink hue. Thus the rough diamond though characterized as a brown diamond from external appearance, must actually have been a pinkish-brown diamond, both colors being produced by plastic distortion of the crystal structure.

Thus the Lesotho Brown diamond is undoubtedly a plastically distorted Type IIa diamond. It is Type II because of the absence of nitrogen impurities. Diamonds that contain nitrogen impurities are Type I, and constitute about 98 % of all naturally occurring diamonds. The remaining 1-2 % are Type II.

Thus all Type IIa diamonds are chemically pure. However they can be of three sub-groups :- a) Structurally perfect   b) Structurally imperfect  c) Naturally irradiated.

b) Structurally imperfect :- These diamonds have a plastically distorted crystal structure, caused by the twisting and bending of the tetrahedral crystal units, placing areas of the crystal under severe strain. The plastically distorted areas change the absorption spectrum of the diamond causing rare fancy colors such as red, purple, pink and brown. The "Lesotho Brown" diamond belongs to this category.

c) Naturally irradiated :- these diamonds are exposed to natural radiation like alpha, beta and gamma rays and neutrons, over a long period of time, that causes changes in the crystal structure, that imparts a green color to the diamonds.

The diamond was discovered on the eroded surface of the Kimberlite pipe of the Lets'eng diamond mine, before its actual exploitation by De Beers began in 1977. The accidental discovery of the massive 601-carat brown diamond was made by a woman by the name of Mrs. Ernestine Ramaboa, in May 1967, and thus became famous as the largest diamond ever discovered by a woman, besides being the 7th largest rough diamond ever discovered in the world. The discovery of the diamond came as a God-given gift to the poor couple, Petrus and Ernestine Ramaboa, who were said to be nearly penniless except for the diamond. The poor couple walked for four days and nights, eventually to deliver the diamond to the safe keeping of a reputable diamond buyer.

After initial studies of the diamond had been completed, it was decided that the rough stone should be cleaved into several pieces, in order to maximize the quality of the final products. The first cleaving of the diamond into two pieces was a much publicized media event held in 1968 and took place under the glare of TV lights, the proceedings being broadcast live on American Television. Mr. & Mrs. Ramaboa, the founders of the diamond, were also invited for the occasion.

The rough stone was cleaved into 18 pieces  and transformed into 18 faceted and polished diamonds, having a total weight of 242.50 carats, resulting in a loss of 358.50 carats or 60%. Such losses are inevitable in attempting to maximize the quality of the diamonds produced, by eliminating all inclusions. The largest diamond produced known as Lesotho I, was a 71.73-carat, flawless, emerald-cut diamond, with a beautiful pale pink hue. The 40-carat Lesotho III diamond also became very famous as it was purchased by Aristotle Onassis and gifted to Jacqueline Kennedy as an engagement gift. The Lesotho III came up for sale at a Sotheby's auction in 1996, and after a frenzied bidding between two anonymous bidders sold for $ 2.59 million. The House of Harry Winston has recently regained possession of the Lesotho I from its former owners.

The economy of Lesotho

Lesotho is an independent tiny mountain kingdom situated almost in the center of South Africa, and entirely surrounded by it. The country being landlocked, with a minimal of resources is entirely dependent on South Africa economically, as well as for access to the outside world. The country's revenue is generated by remittances of Lesotho's migrant workers who work mainly in South Africa, receipts from the custom union agreement, with South Africa, Swaziland and Botswana, and exports of manufactured goods such as clothing, footwear and furniture. The revenue generated is not sufficient to meet the staggering costs of imports, that include basic foodstuffs, manufactured goods, machinery and transport equipment. Thus the survival of the country is heavily dependent on external aid. Under these bleak economic circumstances, the successful exploitation of the only God-given resource for this poor nation, the Kimberlite diamond pipes, situated in the highlands of the country, with the help of foreign participation, comes as good news to the people of this impoverished nation.

The history of diamond mining in Lesotho

The Lets'eng diamond mine that was previously exploited by De Beers from 1977-82, but later abandoned due to a slump in world diamond prices, was again reopened in the year 2004 as a joint venture between the Government of Lesotho and a South African based diamond mining company, Gem Diamonds Ltd. The Government of Lesotho has a 30 % stake in the newly formed company known as the Lets'eng Diamond Company. The remaining 70 % is owned by Gem Diamonds Ltd. Since production started in this mine in 2004, the Lets'eng diamond mine has become internationally famous as a consistent source of large diamonds of more than 10 carats in size, and also exceptionally large diamonds greater than 100 carats in size. In spite of the low yield of only about 2 carats per hundred tons of Kimberlite, the larger size of the stones produced has more than compensated for the greater expenditure involved in operating the mine. The Lets'eng diamond mine has achieved the highest dollar-per-carat ratio of any diamond mine in the world. For the financial year 2006/2007, Lets'eng diamond mines produced 59,809 carats of diamonds which sold for $ 107.15 million, which works out to an average dollar-per-carat ratio of $ 1,791. The world average ratio is approximately $ 81 per carat.

The remarkable diamonds that have been produced in these mines are :-

2) The massive 603-carat Lesotho Promise discovered in 2006. This is the largest diamond ever discovered in the mine, and was sold for $ 12.4 million.

The successful operation of the Lets'eng diamond mine attracted more foreign investors to Lesotho, who concluded lucrative deals for the exploitation of other Kimberlite pipe mines such as the Kao, Liqhobong, Lemphane, and Kolo mines. The Lets'eng Diamond Company are also in the process of installing another processing plant, which when completed is expected to boost production from 50,000 to 100,000 carats per year.

All these developments in the diamond industry of Lesotho augurs very well for the economic development of the country, which eventually should lead to the raising of the living standards of the people of this impoverished nation.