The "Light of Letseng" rough diamond, also known as "Leseli La Letseng" in Lesotho's native language Sesotho, was intentionally named, by officials of the Gem Diamond Mining Company and the Lesotho Government, the joint owners of the Letseng Diamond Mine of Lesotho, where the diamond was discovered, to reflect some of its unique characteristics, such as outstanding color and clarity, which are of the highest possible grade for a rough diamond. The spectacular diamond, the 20th largest rough diamond ever to be discovered, was transformed by the highly skilled team of engineers and polishers of Diamcad (Diamond Computer-Aided Design) - a technology driven highly innovative diamond processing company, based in Antwerp, Belgium, and commissioned by SAFDICO (South African Diamond Corporation), a subsidiary and manufacturing arm of Graff Diamonds, who purchased the stone - into a 102.79-carat, D-color, flawless, round brilliant diamond, the world's first round-brilliant diamond with such characteristics, to exceed 100-carats in weight, which was named by Laurence Graff, as the "Graff Constellation" reflecting the brilliant appearance of this magnificent diamond, as the veteran diamantaire himself put it when presenting the spectacular diamond at a press conference, "when you look into the 'Graff Constellation' you see all the stars in the sky." 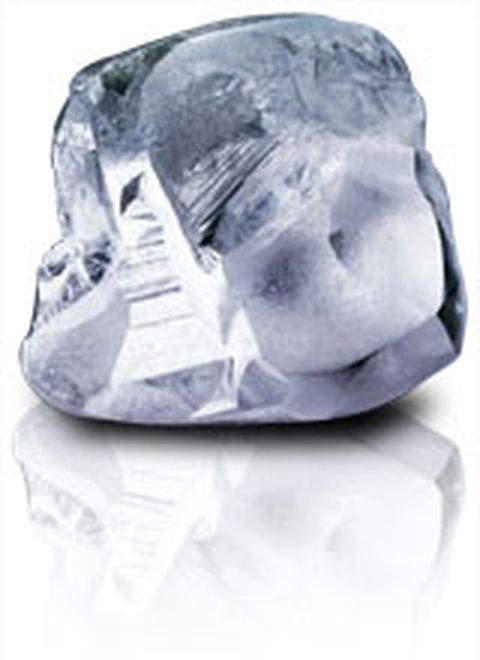 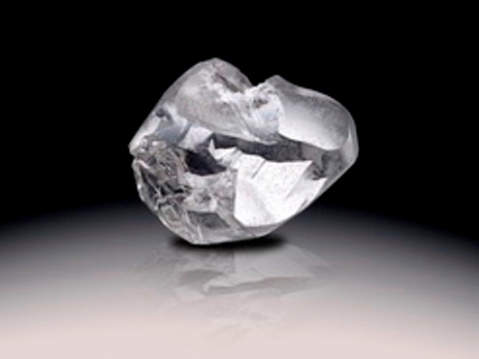 Another view of the Light of Letseng rough diamond

Initial analysis carried out by engineers and master diamond cutters predicted that the rough diamond would yield a D-color, flawless, round-brilliant diamond of up to 150 carats, making it the largest diamond of its kind in history. True to their prediction the rough diamond indeed yielded the largest D-color, flawless, round-brilliant diamond in the world, short of the weight of 150 carats predicted, but still the largest of its kind in the world at 102.79 carats, exceeding the previous record holder of this title, the 90.97-carat Icon/Safia Diamond by 11.82 carats, and the first round-brilliant diamond to surpass the coveted 100-carat mark. This historic and remarkable diamond was christened the "Graff Constellation," the result of a synthesis of the magnificent beauty of nature's finest treasure and the master cutters' art. 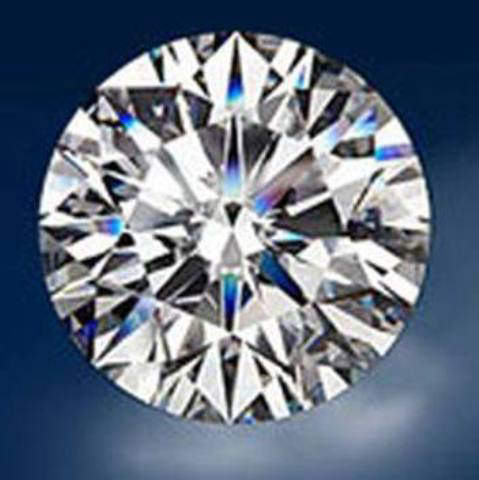 The enormous rough stone also yielded 9 exquisite satellite diamonds, a result of the latest cutting-edge optimization techniques adopted by Diamcad, amongst which was the second largest diamond cut from the rough stone, a flawless, heart-shaped, D-color diamond,weighing 51.20 carats.

Letseng Diamond Mine, world renowned as a consistent source of extraordinary large diamonds

The discovery of the 478-carat "Light of Letseng" diamond at the Letseng Diamond Mine in Lesotho in the year 2008, established the mine as a consistent source of extraordinary large rough diamonds in the world, given the fact that this was the third significant discovery, since the Gem Diamond Mining Company re-started operations at the mine in the year 2004. The first large rough diamond discovered from this mine was the 603-carat Lesotho Promise in the year 2006, followed by the 493-carat Letseng Legacy in 2007. Previously, in the year 1967, 10 years after the kimberlite pipe was discovered in 1957 in the Maluti Mountains of Mokhotiong, and even before De Beers operated the mine for five years from 1977 to 1982, a massive 601-carat brown diamond was discovered by a woman named Ernestine Ramaboa, which at that time was the 9th largest rough diamond ever to be discovered, and the largest diamond ever to be discovered by a woman. Thus, the Letseng Diamond Mine has produced four of the world's 20 largest rough diamonds and three largest diamonds discovered this century.

The Light of Letseng, the most valuable rough diamond ever to be sold by the year 2008

The Light of Letseng rough diamond was sold on tender in Antwerp in November 2008. The world's leading diamantaires participated in the tender, and the winning bid came from none other than SAFDICO, the manufacturing arm of Graff Diamonds, who had also previously bid successfully for the "Lesotho Promise" in 2006 and the "Letseng Legacy" in 2007, that sold for US$ 12.36 million and US$ 10.4 million respectively. The price realized was US$ 18.4 million, the highest price ever paid for a rough diamond, which represented an extraordinary price per carat of of US$ 38,400, against a global average diamond price of US$ 90 per carat. Apart from SAFDICO there were also strong bids from six other diamantaires, who participated in the tender. The record price of US$ 18.4 million, realized by the rough diamond, at a time when the United States and Europe were in the midst of an economic recession, surprised both the officials of Gem Diamonds and the Government of the Kingdom of Lesotho, the owners of the diamond mine.

Mr. Clifford Elphick, CEO of Gem Diamonds, said, the fact that this diamond has been recognized for its outstanding qualities and had achieved a record price despite the difficult financial times, was a testament to the enduring value of the historic diamonds that Letseng continued to produce.

Johnny Kneller, the CEO of SAFDICO said, that they were delighted to be the successful bidder for such a historic stone, following their previous acquisition of the 603-carat Lesotho Promise and the 493-carat Letseng Legacy, both originating from the Letseng diamond mine. He further stated, "with our significant expertise in large diamonds we expect to produce an exceptionally beautiful polished diamond of at least 100 carats in weight. This investment is indicative of our commitment to the diamond industry and our faith in the long term value of diamonds."

Cutting and Polishing of the Light of Letseng rough diamond 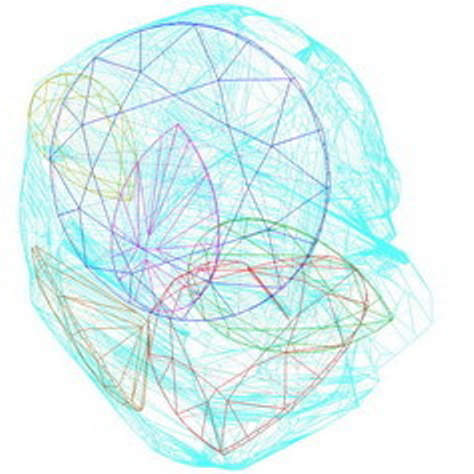 The above scanning outcome reveals the net of six possible satellite diamonds that can be produced from the rough stone, leaving allowance for constraints in the stone, such as inclusions and other imperfections. These are :- two round brilliant-cut diamonds, three pear-cut diamonds and a large almost triangular-shaped portion, suitable for transformation into a heart-shaped cut. The larger round brilliant-cut, occupying a greater portion of the rough, is transformed into the 102.79-carat Graff Constellation, and the second large triangular-shaped net is transformed into a 51.20-carat heart-shaped diamond. Apart from the six nets shown above, the rough stone also yielded four other tiny diamonds, possibly from the corners of the stone not included in the nets. 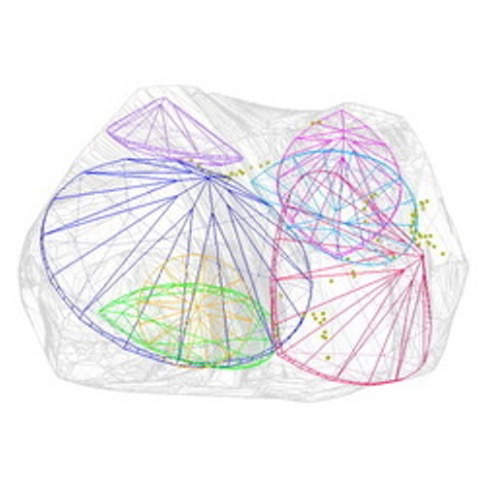 Another view of the scanned outcome

The above diagram is another possible scanned outcome from a different angle. It also reveals the nets of six potential diamonds - two round brilliant-cuts from the culet side, the large triangular-shaped also from the culet side, two pear-cuts and a marquise-cut. The largest net of a round-brilliant was transformed into the Graff Constellation. The corners of the rough stone, not included in the net were possibly transformed into four other tiny diamonds.

The creation of the 102.79-carat, D-color, flawless, round brilliant-cut diamond, the world's largest D-color, brilliant-cut, diamond and the first such diamond to exceed 100 carats, is considered as a historic achievement. By the use of latest optimization techniques, the rough stone also yielded nine other diamonds, including a perfectly cut, flawless, heart-shaped, D-color diamond weighing 51.20 carats. It took the dedicated team of engineers, cutters and polishers of Diamcad, almost one year of painstaking work to cut and polish the 10 satellite diamonds, originating from the "Light of Litseng" rough diamond. The completed diamonds were unveiled by Laurence Graff in the year 2010. Unveiling the "Graff Constellation" the largest D-color, internally flawless, round brilliant diamond in the world, the King of Diamonds Laurence Graff said, "A breathtaking stone, the definition of rarity, perfect in shape, color and clarity, with unparalleled brilliance. When you look into the 'Graff Constellation' you see all the stars in the sky. I am proud to present this truly magnificient diamond."

The 90.97-carat Icon/Safiya diamond, the previous record holder of the title of the world's largest D-color internally flawless round brilliant diamond, from year 2000 to 2010

Prior to the unveiling of the "Graff Constellation" in 2010, the record for the world's largest, D-color, internally flawless, round brilliant-cut diamond was held by the 90.97-carat Icon/Safiya diamond, which was unveiled in the year 2000 at a spectacular ceremony held in Monte Carlo, to mark the opening of Graff's new outlet at the Hotel de Paris. The ceremony included special laser beam and light shows, flower displays, water fountain displays, fire throwers, costume performers on stilts, and a live cheetah. Laurence Graff made use of this spectacular occasion to unveil his latest creation, the 90.97-carat magnificent round brilliant-cut "Icon diamond" to the outside world, which in the year 2000 became the largest, D-color, internally flawless, round brilliant-cut diamond in the world. The diamond placed on a velvet cushion, was carried into the hall by a small Indian boy, who was escorted by two African pole bearers, amidst billowing smoke. The diamond was then placed inside an elaborate showcase for the inspection and appreciation of the invited guests, that included celebrities and other VIPs. One of the invited guests, an Arab from the Middle East, was so impressed and mesmerized by the "Icon diamond" that he deicided to purchase the stone immediately, without any hesitation, for his own private collection. Soon after purchasing the Icon diamond, the new Arab owner, re-named the diamond as "The Safiya" which in Arabic means "pure," probably reflecting the exceptional qualities of this top-color diamond. 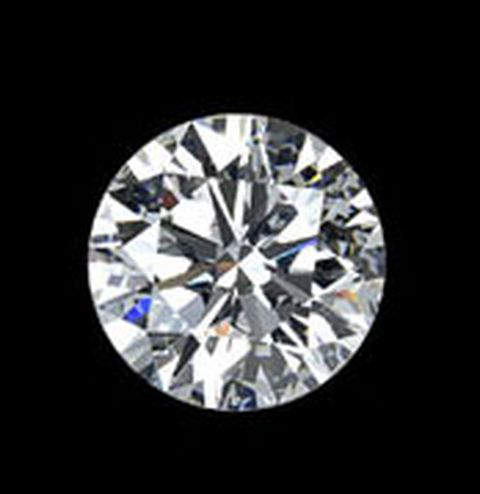 The Safiya was also created by the team of engineers, cutters and polishers of Diamcad in the year 2000. This remarkable diamond was cut from a 338.46-carat rough stone that was discovered from the Premier Diamond Mine in South Africa.