The "Louis Cartier Diamond" gets its name from Louis Cartier, a third generation descendant of the founder of the French firm Cartier, Louis Francois Cartier, who founded the company in Paris in 1847. The new owners of the jewelry firm purchased the diamond in 1974, and decided to name the 107.07-carat  diamond in Honor of Louis Cartier.

List of famous colorless diamonds greater than 100 carats in weight

The diamond was discovered in South Africa in September 1974, but the mine of origin is unknown. The weight of the rough diamond was 400 carats. Cartier purchased the diamond, but the master cutters involved in processing the diamond are not known. It is said that the cutting of the diamond took almost two years, and when completed resulted in three finished diamonds. The largest diamond that weighed 107.07 carats, was a pear-shaped, colorless and flawless stone, that was named in honor of Louis Cartier(1875-1942), who created the first popular wrist watch for men in 1911, known as the Santos. Two other smaller diamonds were also produced from the original rough and came to be known as Louis Cartier I and Louis Cartier II. 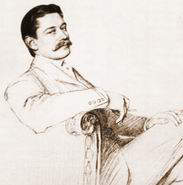 Cartier put the diamond on display in October 1976, in New York City, and subsequently at their branches in London and Paris. The estimated value of the diamond in 1976 was $ 5 million. It appears that the diamond is still in the possession of Cartier and there are no reports about its sale. Cartier who were once referred to by the Prince of Wales, Edward VII, as "Jeweler to Kings and King of Jewelers" had been associated with some of the most extravagant and famous diamonds, such as the 245.35-carat "Jubilee Diamond" sold in 1900 for $ 1.5 million, the 94.8-carat "Eastern Star Diamond," sold in 1908, the infamous 45.52-carat Hope diamond sold in 1911 to Evalyn Walsh McLean for $ 180,000 and the 62-carat "Taylor Burton" diamond sold to Richard Burton in 1967 for $ 1.1 million.

The jewelry firm Cartier was founded in Paris by Louis Francois Cartier in 1847, after he took over the jewelry workshop of his master Adolphe Picard, at 29, rue Montorgueil in Paris. Louis Francois Cartier's son Alfred Cartier took over the administration of the company in 1874, but the credit for establishing the famous worldwide brand name of Cartier should go to Alfred Cartier's three sons, Louis, Pierre and Jacques.

Louis Cartier, the eldest son succeeded his father Alfred Cartier as the manager of the company, and in 1899 shifted the company to its current address at No. 13, rue de la Paix. Louis Cartier was credited for some of the company's innovative designs and creations in jewelry, wristwatches and clocks. Cartier's innovative, and exquisitely crafted jewelry, soon became popular among the royal courts of Europe. The Prince of Wales who succeeded his mother Queen Victoria in 1901, as King Edward VII, once proclaimed Cartier as "Jeweler of Kings and King of Jewelers," and in 1904 granted Cartier the first royal warrant as supplier to the court of England. Even though Patek Philippe is credited with the invention of the wristwatch in 1868, the credit for the actual popularization of the wristwatch over the traditional pocket watch goes to Louis Cartier. In 1904 Louis Cartier was requested by his friend from Brazil Alberto Santos Dumont, an early pioneer of aviation, to design a watch that would be useful during flights, as the pocket watch was not suitable for this purpose. In response to this request Louis Cartier designed the Santos wristwatch, which was later popularized as the first gent's wristwatch, that went on sale in 1911. Subsequently, more models of wristwatches followed, such as the Baignoire and Tortue in 1912, and the Tank in1917.

As the business expanded Cartier opened two new branches, one in London in 1902 and the other in New York in 1909. Jacques Cartier, the youngest of the three brothers was in charge of the London branch which eventually moved to the current address at New Bond Street. Pierre Cartier, the second brother established the New York branch in 1909, which in 1917 moved to the current location at 653, Fifth Avenue, New York. In 1910, Cartier opened two new branches in Moscow and the Persian Gulf. Again between the first and second World Wars, they opened two additional branches in Cannes and Monte Carlo. However it was the success of the New York branch that boosted Cartier's image and helped to gain worldwide recognition. Both Louis Cartier and Jacques Cartier passed away in 1942, and the responsibility of running the family business fell to Pierre Cartier, who became the President of Cartier International, which grew into a huge multinational organization. After the war more new branches were opened in Hong Kong, Munich and Geneva. Pierre Cartier retired from business activities in 1947 at the age of 69, and settled in Geneva.

The family business was now run by a fourth generation of Cartiers. Louis Cartier's son Claude Cartier became the manager of the New York branch. Jacques Cartier's son Jean Jacques Cartier was in charge of the London branch, and Pierre Cartier's daughter Marionne Claudelle became the manager of the Paris branch. Pierre Cartier died in 1964 at the age of 86 years. After Pierre Cartier's death in 1964, Claude Cartier, Jean Cartier and Marionne Claudelle decided to sell the family businesses and for the first time the ownership of Cartier's was transferred to outsiders who did not belong to the Cartier family.

In 1972, a group of investors purchased Cartier Paris, and Robert Hocq became its president, the creator of the concept of "Les Must de Cartier." The new owners of Cartier Paris, later acquired Cartier London in 1974 and Cartier New York in 1976, and in 1979 created Cartier Monde, combining Cartier's interests in Paris, London and New York. Today Cartier has opened more branches in places like Beverley Hills, Waikiki, Boston, San Francisco, Tokyo, Shanghai, and Vancouver.