The Mahjal diamond is a diamond of South African origin previously owned by Maharaj Jagatjit Sing, the Maharajah of Kapurthala, a princely state that was situated in the Punjab province of India. The Maharajah had a magnificent collection of jewels and jewelry which he used for adorning himself at his appearances in court. The name Mahjal appears to have been given by the maharajah for this  magnificent golden yellow diamond.

The Mahjal diamond was sold by Christie's Geneva, in 1983 to an anonymous buyer, who got the stone slightly re-cut and named it Algeiba Star, after the bright golden yellow star, that is situated in the constellation Leo, which is one of the 100 brightest stars in the night sky. The name Algeiba is derived from the Arabic "Al-Jubbah", meaning the "forehead." The Algeiba Star also known as Gamma Leonis, is situated, in the "Sickle of Leo" the part of the constellation Leo, that represents the lion's mane. The Algeiba is actually one of the finest double stars in the sky, situated 86 light years from the earth. The Algeiba-A star is a yellow orange star, 16 times larger than the sun in diameter and 4 times larger in mass, and 80 times as luminous as the sun. 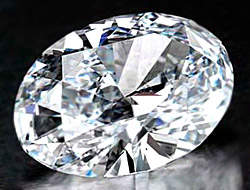 The Mahjal diamond was previously, a 139.38-carat, cushion-cut, golden-yellow diamond, but later after the ownership of the diamond changed  in 1983, the diamond was slightly re-cut to 133.3 carats and re-named the Algeiba Star.

Being a golden-yellow diamond, the Mahjal diamond is without any doubt a Type Ib diamond, in which the intense yellow color is caused by single nitrogen atoms scattered in the crystal. These nitrogen atoms absorb visible light in the blue region of the spectrum, causing the complementary color yellow to appear. If the nitrogen atoms were distributed as groups of atoms the color imparted will be pale to medium yellow, as in Type Ia diamonds. 98 % of all natural diamonds are Type Ia. Type Ib diamonds are rare and constitute only about 0.1 % of all naturally occurring diamonds.

In the list of famous yellow diamonds greater than 100 carats in weight the Algeiba Star occupies the 12th position. See table below.

The Mahjal diamond is of South African origin and belonged to Jagatjit Singh, the Maharajah of Kapurthala (1872-1949). The Maharajah was probably educated in France, as he was a devoted Francophile, who spoke excellent French and had a great attachment to everything French. His palace was furnished with imported French furniture and fittings, and he employed French servants in his palace. The Maharajah may have purchased the diamond in one of his frequent visits to Paris, during the end of the 19th century or beginning of the 20th century. Most of the diamonds mined in South Africa found their way to the European capital cities, during this period. 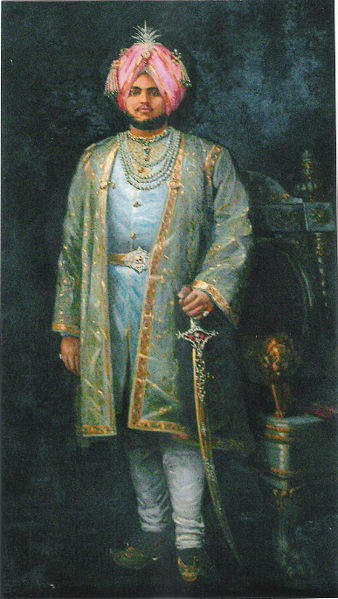 Jagatjit Singh was used to an ostentatious style of living, and had a magnificent collection of jewels and jewelry, which he always used to adorn himself in his appearances at court. He is reported to have owned several jewel-studded turban clips, which he wore in the plaits of his turban. One such clip was reported to have been made up of 3,000 diamonds and pearls. Jagatjit Singh also owned a Golden Topaz, which was reputed to be one of the biggest in the world.

Kapurthala was situated in north-central Punjab, in north-western India. The city was founded in the 11th century, and in 1780 became the capital of the princely state of Kapurthala, and remained so until it was absorbed into the newly formed Indian Republic in 1947. Kapurthala lies west of the city of Jullundur. With the abolition of the Princely States of India, the jewelry belonging to the former Maharajahs eventually found their way to the capital cities of Europe, where they were disposed of by the Maharajahs or their heirs.

The Mahjal diamond that once belonged to Jagatjit Singh, re-surfaced at Christie's of Geneva in 1983, where it was sold at an auction, to an anonymous buyer, for a record price of 1.32 million Swiss francs. The anonymous buyer who purchased the diamond had it slightly re-cut to its present weight of 133.3 carats. He then renamed the diamond Algeiba Star, the bright golden yellow star in the constellation Leo, whose color seem to correspond to the  unique golden yellow color of the diamond. The present whereabouts of the diamond is unknown.