The 777-carat rough diamond that was eventually transformed into the 203.04-carat "Millennium Star" diamond, was discovered in the Mbuji-Mayi district of Zaire, in 1990. The 203.04-carat, finished diamond was unnamed until October 1999, when it was unveiled to the world, as the centerpiece of the De Beers Millennium diamond collection, by the Chairman of De Beers Nicky Oppenheimer, who christened the diamond "The Millennium Star." 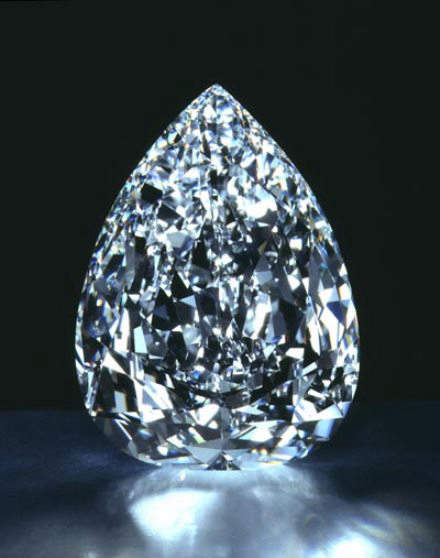 The Millennium Star being a D-color diamond is a Type IIa diamond, which    constitute about 1-2 % of all natural diamonds. Diamonds are generally impure containing trace quantities of impurities such as nitrogen and boron. The commonest impurity found in diamonds is nitrogen, which imparts different shades of yellow colors to diamonds depending on the concentration and distribution of the nitrogen atoms in the crystals. These diamonds are known as Type I diamonds, which include almost 98 % of all naturally occurring diamonds. The remaining 2 % of natural diamonds that do not contain nitrogen impurities are known as Type II diamonds. 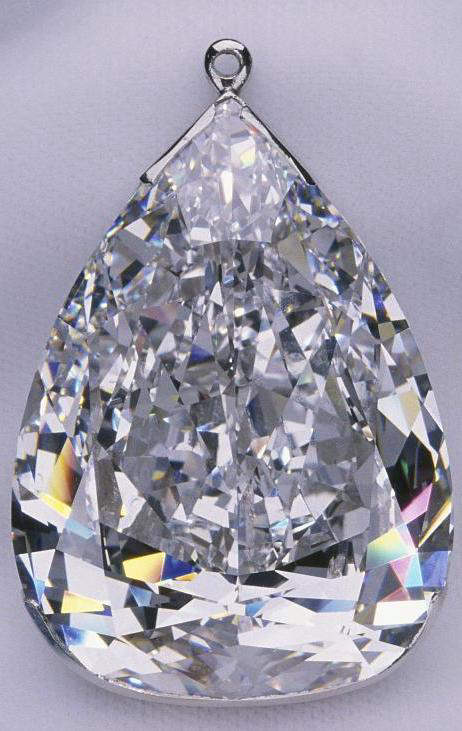 Type II diamonds that contain trace amounts of boron as impurities are blue in color and are known as Type IIb diamonds. These diamonds are only 0.1 % of naturally occurring diamonds and are very rare. Thus the remaining 1-2 % of all naturally occurring diamonds that do not contain any impurities are known as Type IIa diamonds. These diamonds being pure are absolutely colorless. However a very small percentage of these diamonds have undergone plastic deformation in their crystal structure during their formation and subsequent rise to the surface of the earth. These diamonds acquire a range of rare fancy colors such as pink, red, purple, etc., caused by the absorption of visible light by the deformed areas of the crystal in different regions of the spectrum. They constitute less than 0.1 % of all natural diamonds and are extremely rare.

Thus D-color diamonds are chemically pure and structurally perfect diamonds. They are said to be the "purest of the pure" of all naturally occurring diamonds.

The  Millennium Star diamond originated from a unique rough stone, with a magic weight of 777 carats that was discovered in 1990, in the Mbugi-Mayi district of Zaire (Democratic Republic of Congo). The number 777 was considered a magic number, and the discovery of a diamond having a carat weight of 777 was considered a good omen, and a harbinger of good things to come. The result was a diamond rush that attracted thousands of fortune seekers, digging in the alluvial deposits of the Mbuji-Mayi district of Zaire, with the hope of finding more rough diamonds of the type already discovered.

Agents of the De Beers Company in Zaire, purchased the stone, and carried it to their offices in South Africa. The De Beers Company entrusted the cutting of the diamond to an international team of cutters from South Africa, Israel, Belgium, and America, headed by Israeli born Nir Livant, working under the umbrella of the Steinmetz Group of Diamond Companies. The master cutters of the Steinmetz Group, were earlier involved in the cutting of the 100.10-carat, D-color, flawless diamond, the "Star of the Season," that was eventually sold by Sotheby's in  1995 for a record price of $ 16.5 million, which represented the highest price paid for any polished diamond in the world.

The team of experts, studied the diamond extensively, a process that lasted about 4-5 months. About 100 plastic models of the original rough stone were made, and they were used to plan and design the optimum polished stone, both in terms of beauty and weight. Finally the cutters decided, that the rough stone be cleaved into three pieces, one large piece and two smaller pieces. The largest piece was eventually transformed into the 203.04-carat, pear-shaped, Millennium Star. The fate of the remaining two pieces have not been disclosed.

According to one of the cutters of the Steinmetz Group, the infrastructure and skills required to cut and polish such large stones was extremely complex and dramatically different from the usual polishing factory. A specially designed "Operations Room" was set up by the Steinmetz Group. The conditions in this room was similar to the sterile conditions prevailing in a surgical theatre of a hospital. The room was completely dust free. According to Mr. Nir Livant, head of the international team of cutters and the managing director of the Johannesburg based, Ascot Diamonds, a member of the Steinmetz Group of diamond companies, no dust was allowed to touch the stone, so the scaifes had to be adjusted accordingly. Further the temperature of the stone had to be monitored and controlled during the cutting and polishing process, in order to avoid cracks or other damages to the stone. Special tangs had to be designed to hold the stone.

When completed the Millennium Star had a weight of 203.04 carats. The stone had a classic pear shape with 54 facets. The color rating of the diamond was D-color, the highest rating for a colorless stone. The stone was flawless both internally and externally. It is the second largest, faceted, D-color, flawless, diamond in the world, after the 273.85-carat "Centenary Diamond." According to Mr. Nir Livant, "the diamond is not only flawless internally but externally as well. There is not even a single scratch or burn mark on any of the facets. This is extremely exceptional and a tribute to the cutters expertise, and De Beers is therefore rightfully presenting the stone as externally flawless. The cutters received the ultimate compliment when former De Beers Chairman, the late Harry Oppenheimer, undoubtedly the doyen of the diamond industry and who had probably handled more important diamonds in his 70-year career than any other person in the world, described the Millennium Star as "the most beautiful diamond I have ever seen."

The Millennium Star was the centerpiece of the De Beers Company's limited edition Millennium Diamonds Collection, which also consisted of 11 other extremely rare blue diamonds, cut in a variety of shapes and having a total weight of 118 carats. The team of cutters and polishers headed by Nir Livant, worked almost round the clock for almost three years polishing the collection, and getting them ready for the ceremonial unveiling, before the onset of the New Millennium. The diamonds were  presented to the world  at an impressive and much-publicized  ceremony held at the CSO's Charter House Street complex in London, with the top executives of De Beers and Steinmetz Group of Companies in attendance. The latest James Bond girl, French actress Sophie Marceau, who starred in the James Bond film "The World Is Not Enough" was the object of great attention at this glittering event, as she delicately held the Millennium Star, and posed for the TV cameras and the press photographers.

The Millennium Diamond Collection was undoubtedly the world's rarest and perhaps the most valuable set of diamonds ever put together, to mark the dawn of a new Millennium, the year 2000. The Chairman of De-Beers Nicky Oppenheimer presenting the De Beers Millennium  Collection, stated that "Millennia come and go, but diamonds are forever."

The De Beers Millennium Diamond Collection was displayed at the London's Millennium Dome, in a specially designed exhibit for the entire year of 2000, and around 12 million people were expected to visit the Millennium Jewels Exhibition. There was an unsuccessful attempt to steal the collection of diamonds on November 7th 2000. Crime journalist Kris Hollington wrote a book about the attempted theft called "diamond Geezers," which also featured a detailed history of the Millennium Star.

While the Millennium Star was the center piece of this unique exhibition, the eleven exceptionally rare blue diamonds  surrounding the Millennium Star, was a genuine cause for excitement in the diamond trade. According to a Steinmetz spokesman, each one of the blue diamonds came from the famous Premier mine in South Africa. Blue diamonds of this size and quality were extremely rare, and to discover one on any year was an incredible accomplishment, let alone discovering the entire collection. The Blue diamonds were of various shapes, such as heart-shape, pear, emerald, asscher, oval, and marquise, and sizes, with weights ranging from 5.16 carats to a maximum of 27.64 carats, belonging to the Heart of Eternity. Each of the blue diamonds were to be specially inscribed with a De Beers Millennium number, using the De Beers proprietary branding technique, but the Millennium Star was not to be branded, because of it's exceptional quality of being both internally and externally flawless, without even a single scratch or burn mark on any of the facets. Such branding would have created a flaw on an extremely exceptional diamond, where flaws were originally non-existent. 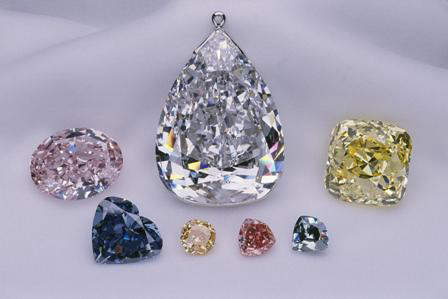 Chairman Nicky Oppenheimer of the De Beer's Consolidated Mines Ltd, gave an apt summing up  of the De Beers Millennium Jewels Exhibition, when he said that these incredible diamonds had been collected at the end of this Millennium, and presented to the world to celebrate the beginning of the next. Nature gives you so few blue diamonds that most people will not see one in their life time. "As we come together to celebrate the New Millennium,  De Beers is giving the world a chance to see this unique collection, truly a once a Millennium experience. To be able therefore to unveil a truly spectacular new diamond, the Millennium Star, on the threshold of a new Millennium, is surely a uniquely opposite combination of two very rare events. To be able to unveil not only one diamond, but a collection of such rarity that most of us will not see it's like again is, I think the only adequate way to mark the passage of 2000 years of man's history," concludes Oppenheimer. 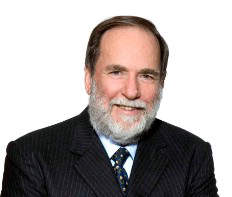 The Millennium Star was exhibited at the Smithsonian Museum in Washington D.C. in the year 2003, as part of an exhibition titled the "Splendor of Diamonds Exhibition," which lasted from June 27th to September 15th and featured several famous colored diamonds such as the Alnatt, the Pumpkin diamond, the Moussaieff Red, the Ocean Dream, the Steinmetz Pink, and Heart of Eternity.