Mouawad Lilac diamond is one of the eight eponymous diamonds bearing the name Mouawad, derived from the name Robert Mouawad, the head of the world renowned international gem and jewelry dealers, the Mouawad Jewelers, established in 1890 by his grandfather Daoud Mouawad. Robert Mouawad is also a connoisseur and collector of diamonds with a magnificent collection of famous, historic as well as other rare diamonds. 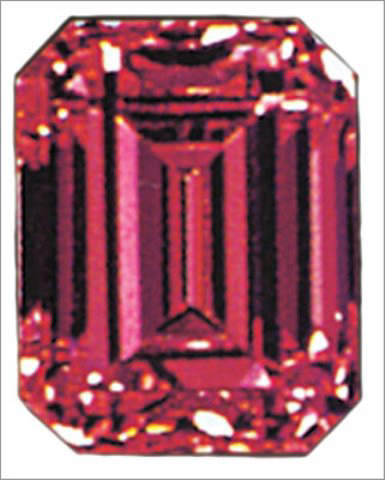 The Mouawad Lilac is a 24.44-carat, emerald-cut diamond with a color grading of fancy pink. It's perhaps the 7th largest pink diamond in the world. See table below.

The Mouawad lilac, being a pink diamond, is a Type IIa diamond. These diamonds are Nitrogen-free, and are supposed to be absolutely colorless, but plastic deformation in the crystal structure has imparted the pink color to the diamonds. However the occurrence of these diamonds is much less than 0.1 % of all naturally occurring diamonds. Thus pink diamonds are very rare in occurrence. A statistical estimate at the argyle diamond mines has revealed that only a single carat of pink diamond is produced for every one million carats of rough diamonds.

The early history of the diamond such as the country of origin, the mine of origin, date of discovery etc. are not known, but the diamond most probably originated in South Africa, which was the main source of pink diamonds in the 20th century. The diamond first made it's appearance on 5th June 1976, at a Sotheby's auction in Zurich, Switzerland, and after a successful bidding was purchased by Robert Mouawad for 2.700,000 Swiss francs, equivalent to US $ 1, 088,710. The current estimated value of the stone is US $ 20 million. Robert Mouawad has added the stone to his rare and unique collection of historic and rare diamonds.

The Mouawad Lilac is the 7th largest eponymous diamond in the Mouawad's collection of diamonds.

Robert Mouawad, first showed an interest in international jewelry auctions in the 1970s. His entry into the jewelry auctions was a welcome development for the auctioneers and auction houses, but perhaps a source of concern for fellow bidders and competitors. His very presence in the sales room was enough cause for anxiety among fellow bidders. He became a significant player at these auctions, and together with his contemporaries, Laurence Graff of London, and Sheik Ahmed Fitaihi of Jeddah, was responsible for some of the highest prices for diamonds recorded at these auctions, in recent years.

His initial interest was in the purchase of historical and world famous diamonds. Thus he was able to acquire the following historical diamonds at various auctions :- the Ahmedabad, the Indore Pears, Queen of Holland, Tereschenko, the Jubilee, the Excelsior, and President Vargas.

Later he diverted his attention towards the acquisition of rare colored, modern cut diamonds of recent origin. Most of these diamonds became eponymous diamonds starting with the name Mouawad. There are eight eponymous diamonds in Robert Mouawad's rare and magnificent collection of diamonds. Back to Famous Diamonds,Gemstones and Pearls