Lot No. 149, described as "An Attractive Natural Black Pearl Ring" was one out of 15 pieces of pearl jewelry, that appeared at the Christie's Contemporary Jewelry and Watches Sale, No. 7664, held at the Jumeirah Emirates Towers Hotel, Dubai, in the United Arab Emirates, on April 29, 2008. The piece registered a price of $43,000 at the auction, even though the pre-sale estimate of the piece was placed between $50,000 and $70,000. Perhaps, this was only piece of pearl jewelry at the auction that sold below the lower estimated price. Yet, the price of $43,000 can be considered as significant, given that the weight of the pearl is only 5.84 carats, equivalent to 23.36 grains. This gives a price per carat value of $7,363 for the pearl. In comparison the price per carat realized at the same auction for another black pearl, incorporated as a pendant, in the Belle Epoque Natural Grey/Brown pearl pendent necklace, weighing 56.81 carats, was $13,536. 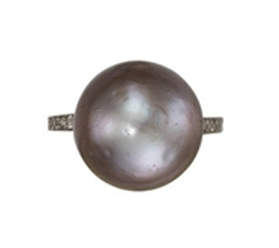 The shape and weight of the pearl

Therefore the variation in diameter = 2%

Therefore the variation in diameter = 2%

The color, overtones and luster of the pearl

The color of the pearl is a silvery-black or silvery-grey color, where the black or grey color is the main body color of the pearl, and the silver color an overtone color. The black color of the pearl is due to melanin pigments associated with the conchiolin part of the nacre. Overtones colors are caused by an optical effect as light passes through successive layers of nacre. In black pearls apart from silver color, a variety of overtone colors such as gold, purple, blue, green, yellow, reddish-purple and rainbow, can cause a combination of colors such as Tahitian gold (golden black), cherry (purplish-black), lavender (bluish-black), peacock (greenish-black), pistachio (greenish-grey), champagne (yellowish-grey), aubergine (reddish-purple and black), rainbow (rainbow of colors and black) etc. Peacock and pistachio are the most popular and much sought-after colors in black pearls.

Design of the ring

The metal used in the ring and the ring size are not known. But, perhaps it could be silver, platinum or white gold. The shoulders of the ring are set with single-cut diamonds.

Can the ring be a pre-20th century piece ?

Nothing is known about the previous owner, or the historical provenance of the natural black pearl ring. The only feature in the ring that may perhaps point to its antiquity is the use of single-cut diamonds on its shoulders. But, the evidence is not conclusive. Perhaps the metal used in the ring may give an indication as to the antiquity of the ring. If the metal used in the ring is platinum or white gold, the origin of the ring is the 20th-century, as platinum was first introduced in the Belle Ã‰poque period between 1901 and 1915, and white-gold was first introduced in the 1920s. On the other hand if the metal used on the ring is silver or gold, the origin of the ring, could be pre-20th century, as these were the main metals used in rings at that time. A combination of silver or gold and single-cut diamonds on the shoulder, may indicate the antiquity of the ring.

The possible sources of the natural black pearl

The geographic range of the black-lipped pearl oyster

Black pearls are usually produced in the black-lipped pearl oyster Pinctada margaritifera, which has a wide geographical distribution, in the tropical Indo-Pacific waters from the Persian Gulf in the Indian Ocean, through the South Sea, to the Gulf of California, in Mexico, in the Pacific Ocean; and in the Pacific Ocean from Japan in the northern Pacific to the southern Pacific Islands of the French Polynesia.

Persian Gulf was the first source of natural black pearls, followed by Baja California, in the 16th to 18th centuries.

In ancient times the first source of black pearls was the Persian Gulf, where Pinctada margaritifera co-existed with the more dominant species of pearl oysters, Pinctada radiata. In the 16-th century, after the Spanish discovered rich pearl oyster resources in Venezuela, they also discovered additional pearl resources in the Gulf of California, in Mexico, and off the Pacific coast of Panama. The oyster species discovered in the Gulf of California, was Pinctada margaritifera that produced black pearls. Baja California, now became the main source of black pearls, and significant quantities of these black pearls entered the European markets, through Spain in the 16th to 18th centuries. The black pearls in Empress Catherine the Great's (1729-1796) famous black pearl necklace, comprising 30 black pearls, the largest of which was 78 grains, were believed to have originated from Baja California. In the 18th-century, the Austrian Crown of the Habsburg dynasty, was set with 30 black pearls, also believed to have originated in Baja California.

In the 19th-century, the main source of natural black pearls in the world was the southern Pacific Islands, which became a French protectorate in 1842. Touamotu archipelago was the main source of the black Tahitian natural pearls, which was actually a by product of the pearl shell collection industry that persisted from 1820 to 1880. The black pearls in Empress Eugenie de Montijo's (empress consort of Napoleon III) black pearl necklace are believed to have originated in the French Polynesia, which remained a source of natural black Tahitian pearls even in the early 20th-century, even though pearls were becoming scarcer due to over exploitation.

Significant quantities of natural black pearls also entered the markets from Australia, in the late 19th and early 20th centuries, where the black-lipped pearl oyster was exploited in the northern coast of Australia, from Champion Bay in Western Australia to Moreton Bay in Queensland. Thus, if the natural black pearl in the ring originated in the 19th-century or early 20th-century, the most probable sources of the pearl were the French Polynesia or  northern Australia.

The natural black pearl ring which was Lot No. 149 at the Christie's auction, was accompanied by a laboratory report bearing No.0127905, dated February 18, 2008, issued by the Gem Testing Laboratory of Great Britain, authenticating that the pearl is natural and free of any treatment.

The sale of the natural black pearl ring