There were about 10 pieces of natural pearl jewelry in Princess Margaret's jewelry collection. Out of these 7 pieces have been treated extensively in three separate webpages dedicated for this purpose. This webpage is dedicated to the remaining three pieces in the collection, whose names are listed below :-

1) A Pair of Antique Coral, Seed Pearl and Diamond Earclips

The colors and appearance of the earclips seem to conform to the accepted mourning colors of the period, in which they were designed

The Pair of Coral, Seed Pearl and Diamond Earclips is an antique piece designed around 1870, during the mid-Victorian period, that lasted from 1861 to 1890, a period of mourning that began with the double tragedy faced by Queen Victoria in 1861, the death of her mother, the Duchess Of Kent, followed by her beloved husband Prince Albert, later in the year. The great loss suffered by the Queen, thrust her and the entire nation into a state of mourning. During this period jewelry designs became somber and austere, reflecting the mood of the nation. The first year of mourning was considered a full mourning period, and the years that followed as half-mourning periods. Black clothing and black jewelry were worn by mourners during the first year. Black jewelry were set with black gemstones such as black onyx, jet and vulcanite. After the full mourning period, half mourning colors, such as grey, mauve and purple clothing were used. Apart from onyx, jet and vulcanite, other dark stones such as amethyst and deep-red garnets were also used in mourning jewelry. The pair of coral, seed pearl and diamond earclips depicted in the photograph below, also seem to reflect the mood of the period in which they were designed. The white color of the pearls and diamonds and the dull colors of the corals, which probably would have been red when first mounted, seem to conform to the accepted mourning colors of the period.

Features of the Antique, Coral, Seed Pearl and Diamond Ear-clips

Designed as circular clusters, each ear-clip has an old mine-cut diamond at the center of the cluster, mounted on yellow gold. The circular area at the center where the diamond is mounted is surrounded by a layer of round or oval shaped corals. There are 16  cabochon-cut corals in this layer, and the corals are a dull pink in color. Perhaps the corals would have had a darker red or pink color at the time they were first mounted, and over the years faded in color, forming the dull pink color. The layer of corals is surrounded by a layer of  round or oval shaped, white, lustrous, seed pearls, the outermost layer of the cluster. This layer is not a continuous layer, but a split layer with gaps in between the pearls, and broader at the points where the pearls are mounted, imparting a wavy outline to the layer. There are 14 seed pearls in this layer.

An interesting feature about this pair of earclips is that the main gemstones mounted on them, the seed pearls and corals, are both of organic origin, the seed pearls being produced by bivalve mollusks and the corals produced  by colonies of Anthozoan polyps belonging to Phylum Cnidaria. Chemically too pearls and corals are almost made of the same chemical substances, pearls of calcium carbonate in the form of aragonite and calcite, and a protein component called conchiolin; while corals, either predominantly of calcite as in calcareous corals, or of conchiolin, as in conchiolin corals. Most of the coral species used for jewelry are calcareous corals, such as Corallium rubrum (Mediterranean red coral) and Corallium japonicum (Sea of Japan red coral), Keratoisis profunda (bamboo coral) and Eunicella verrucosa (sponge coral). In processing corals as gemstones, they are first stabilized by impregnating with resins and epoxies, dyed if necessary to enhance the color, or bleached to create white coral, and then cut and polished. Polishing transforms the appearance of corals from a matte-like form to a glossy finish. Being opaque they are generally cut as cabochons with a convex surface, or cut and polished and drilled into beads. Pearls on the other hand are almost in a finished form, when they are recovered from the oysters, and may require only a minimum effort, such as tumbling, to bring out their maximum luster and brilliance.

The Sale of the Antique Coral, Seed Pearl and Diamond Ear-clips

The Antique Coral, Seed Pearl and Diamond Ear-clips was Lot No. 165, at the Christie's London auctions of Princess Margaret's collection of jewelry and Faberge, held on June 13, 2006. A pre-sale estimate of £400 to £600 was placed on the pair of ear-clips, but it sold for an enhanced price of £6,000, ten times more than the upper pre-sale estimate, in keeping with the skyrocketing trends at the auctions.

Features of the Pearl Brooch/Pendant

The Pearl Brooch cum Pendant, a wedding gift for the Princess, on the occasion of her marriage to Mr. Antony Armstrong Jones on May 6, 1960, is an elegant piece of jewelry set entirely with natural pearls varying in size from seed pearls less than 2 mm in diameter to pearls ranging from 2 mm to around 8 mm in diameter. The inverted heart-shaped brooch which is 14 cm long inclusive of the tassels, is designed as a stylized sunburst suspending five articulated tassels, also set with seed pearls. The intricate design of the brooch is centered around a large spherical  white pearl, the largest pearl in the entire brooch,  mounted at the center. Three rows of pearls surround this central pearl, arranged as inverted pear-shapes, with their pointed ends directed towards the notch of the inverted heart-shaped brooch. The upper surface of the brooch has eight curved pear-shaped areas lined with small seed pearls, each containing three large spherical pearls. In between these areas two large pearls are situated, except along the median line, where there are three pearls. Two large pear-shaped areas lined by seed pearls and each containing five large spherical pearls are situated on either side of the notch of the inverted heart-shaped brooch. The five articulated tassels hanging from the lower surface of the brooch, appear to be made of seed pearl beads and spacers. 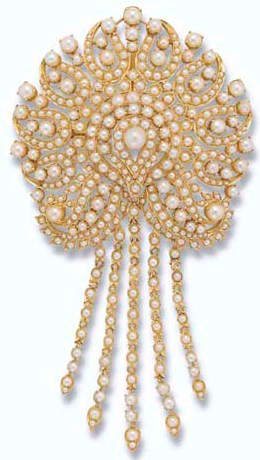 An estimate of the total number of pearls on the brooch

An approximate estimate of the number of pearls on the brooch can be made due to symmetrical nature of the design, even though the whole design appears to be complicated.

Thus, in the entire brooch there are approximately 332 pearls, out of which 249 are seed pearls and 83 large pearls.

Features of the pearls on the brooch

The pearls on the brooch are of varying sizes, ranging from the smallest seed pearls less than 2 mm in diameter, to larger pearls ranging from 2 mm to around 8 mm in diameter, the approximate size of the central largest pearl. There are approximately 249 seed pearls and 83 large pearls on the brooch, making a total of 332 pearls.

The probable source of the pearls

The Sale of the Pearl Brooch/Pendant

3) A Diamond, Pearl and Gem-Set Bracelet

Historic Provenance of the Bracelet

The bracelet was among the pieces in Princess Margaret's collection, which she received as gifts from her grandmother, Queen Mary, the Queen Consort of King George V. Other important pieces of jewelry which she received from Queen Mary, included the Five-Row Art Deo Pearl and Diamond Necklace, as a gift for her 18th birthday; an Art Deco Sapphire and Diamond Bar Brooch, as a gift on her confirmation day; and the Lady Mount Stephen Diamond  Rivire, which Queen Mary wore at her son, King George VI's coronation.

The Diamond, Pearl and Gem-set Bracelet, has a historical provenance, probably dating back to the 19th-century. The bracelet was actually given by His Majesty King George V, to his Queen Consort, Her Majesty Queen Mary, as a Christmas gift, in the year 1929. King George V, acquired this historic piece from the two daughters of Russia's Dowager Empress Maria Feodorovna, who inherited their mother's jewelry collection after her death in Denmark in 1928. When Dowager Empress Maria Feodorovna, the Empress consort of Czar Alexander III (reign 1881-1894), escaped the Russian revolution in 1919, with her surviving family members, by boarding the British ship HMS Marlborough, she carried her jewelry with her. She stayed in London for a short period as guest of her sister Queen Alexandra, Queen consort of King Edward VII ( reign 1901-1910) and her nephew King George V. Subsequently she returned to Denmark, her native land, where she chose her former holiday villa, Hvidore, near Copenhagen, as her permanent home. She died on October 13, 1928, at Hvidore, in Copenhagen, Denmark. After Empress Maria Feodorovna's death, Queen Mary acquired most of her jewels, from her two daughters in 1929. It was during this period in 1929, King George V, purchased the Diamond, Pearl and Gem-set Bracelet, from Empress Maria Feodorovna's daughters, and presented it as a Christmas gift to Queen Mary in 1929.

Features of the Bracelet

Sale of the Diamond, Pearl and Gem-set Bracelet

The Diamond, Pearl and Gem-set Bracelet, was Lot No.175, at Christie's London sale of Princess Margaret's collection of jewelry and Faberge held on June 13, 2006. The bracelet was accompanied by a report, bearing No.980234, dated April 3, 2006, issued by the Precious Stone Laboratory, London, confirming that the central single pearl on the bracelet was a natural pearl. A pre-sale estimate of £4,000 to £6,000 was placed on the bracelet, considerably higher than most other pieces, reflecting the value of the diamonds on it. However, the bracelet was sold for the much enhanced price of £67,200 ($123,648), eleven times higher than the upper pre-sale estimate, in keeping with the trend shown at the auctions.

4) Victorian Jewelry Period - History of the usage of plant and animal motifs in jewelry designs - The Tarantula Brooch. www.internetstones.com