The name refers to a multipurpose piece of jewelry, accompanied with screw drivers, and provision made for its conversion to  either a necklace, tiara, smaller tiara, pendant or brooch depending on the occasion and the wearer's tastes and requirements. This versatile piece of jewelry, said to be the property of an unidentified European noble family, appeared at the Sotheby's Magnificent Jewels Sale, held in Geneva, on November 19, 2008, at the height of the recent global economic recession and credit crisis, but remained unsold, despite the strong showing of other pieces of jewelry containing diamonds and pearls, alone or in combination. The credentials of this beautiful piece of jewelry in terms of design features, the quality of the materials used such as pearls and diamonds, and its versatility are really exceptional, in spite of its inability to sell at the auction. A moderate pre-sale estimate of 140,000 to 200,000 CHF (US$ 114,000-163,000) was placed on this necklace; yet, an analysis of the auctions results show that prospective bidders were really going after investment grade pieces, extremely rare collectible items that may readily be reconverted into liquid cash if the need arose, at enhanced prices.

Characteristics of the  Natural Pearl and Diamond Necklace/Tiara

The image shown in the photograph is the dismantled lower part of the necklace, which becomes a tiara when inverted 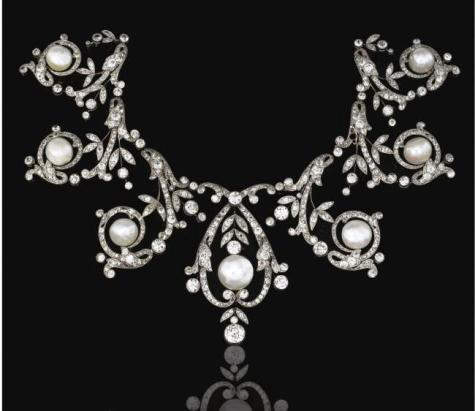 The Lower Dismantled Part of the Natural Pearl and Diamond Necklace 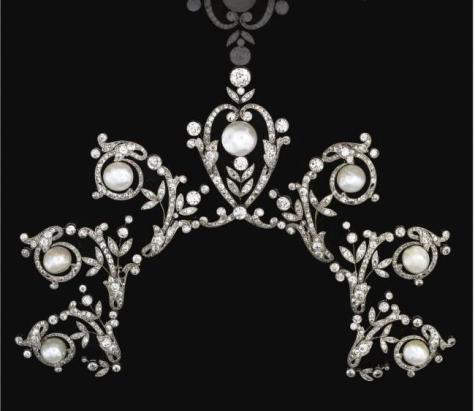 The Lower Dismantled Part of the Natural Pearl and Diamond Necklace Inverted to Produce a Tiara.

Conversion of the tiara to a smaller tiara 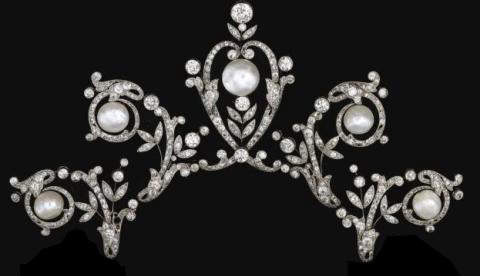 Further dismantling of the tiara to form a pendant or brooch

Pendant Produced by Dismantling the Centerpiece of the Tiara

Brooch Produced by Inverting the Pendant

Design features in the Necklace/Tiara

The most striking design feature of this necklace/tiara is its openwork filigree design, a delicate and intricate ornamental work made of twisted platinum or silver wire. The scroll work design of the necklace incorporates both floral and foliage motifs. The perfect symmetry of the design and settings in the necklace demonstrates the experience and skill of the unknown designer. The design consists of a unique central scrollwork, with three identical scrollworks on either side. Thus, there are seven scrollwork designs on the necklace, and the centerpiece of each scroll motifs is occupied by a perfectly spherical natural white pearl. Each of the scrollworks on the sides, has two foliage designs at its base, consisting of two and three leaf-lets. Circular-cut, cushion-cut and rose-cut diamonds of different sizes are millegrain-set on symmetrical positions on the necklace.

Features of the pearls in the Necklace/Tiara

The size and weight of the pearls

There are seven natural saltwater pearls in the necklace/tiara, incorporated as the centerpiece of each scrollwork. The pearls vary in size from 11.6 to 15.4 mm. The largest pearl with a diameter of 15.4 mm is situated as the centerpiece of the main scrollwork at the center. The size range of 11.6 to 15.4 mm is equivalent approximately to a weight range of 45 to 100 grains, according to Kunz & Stevenson's conversion table given in Chapter 4 of their book, "The Book of the Pearl" that relates weight of pearls in grains to diameter in millimeters. Please check the webpage, the Nine-Strand Natural Pearl Festoon Necklace for the table.

The shape, color, luster, orient and surface quality of the pearls

The seven pearls appear to be spherical or near-spherical in shape, the most desirable but extremely rare shapes among natural pearls. The color of the pearls appear to be silvery-white, the most sought-after color in pearls. The exceptional luster, brilliance and orient of the pearls are associated with their natural saltwater origins, being made entirely of nacre, and the extra brilliance attributed to their saltwater provenance. The surface quality of the pearls are also exceptional, being apparently blemish-free.

History of the Natural Pearl and Diamond Necklace/Tiara

The Source of the Pearls

The species of origin of the pearls

Possible source of the pearls

Having known the species of origin of the pearls, one can predict the source of the pearls. Pinctada maxima is a species of pearl oyster whose natural home is the South Sea, that connects the Indian and Pacific Oceans and lies between Southern China and Northern Australia. A natural pearl harvesting industry based on Pinctada maxima had existed in the past only in two countries, China and Australia. However, a more systematic exploitation of Pinctada maxima took place only in Australia, in the western, northwestern and northern regions, beginning in the 1860s and ending in the 1950s. But, the primary purpose of this exploitation was the good-quality mother-of-pearl shells produced by this species, which was ideal for the shell button industry. In fact, Broome in northwestern Australia became the world's largest producer of mother-of-pearl  for the shell button industry, during the last two decades of the 19th-century and the first two decades of the 20th-century (1880-1920). Apart from the mother-of-pearl shells produced, significant quantities of natural South Sea pearls were also produced as a by product of this intensive exploitation. In fact most of the natural South Sea pearls that reached Europe, came actually during this intensive period of exploitation of Pinctada maxima, from 1880 to 1920. It is possible that the pearls incorporated in this necklace also came from Australia, during this period.

The possible period of origin of the necklace

Design features on the necklace/tiara that indicate its Edwardian origin

1) Light and airy design such as openwork filigree design.

3) The extensive use of diamonds in the design, accentuated by pearls.

4) The use of only white gemstones on the design and white metal, such as platinum or silver, referred to as "white on white" settings.

5) Mille-grain setting of the diamonds.

6) Use of rose-cut diamonds

All these features are characteristic of jewelry produced during the Edwardian period- 1901 to 1920, that roughly coincided with the Belle Epoque period in France (1890-1920). The Edwardian Period that began with the ascension of Edward VII to the throne of the United Kingdom in 1901, was the beginning of a period of elegance, frivolity and fun, after Queen Victoria's long period of mourning.

Styles, motifs, settings and types of jewelry popular during this period

Jewelry styles of the period were light and delicate, but elegant and graceful, decorated with openwork motifs such as garlands, laurel wreaths, lace, tassel and bow motifs, doves, hearts, small animals, sun, stars and crescent moon motifs, with new setting styles such as knife-edge and mille-grain settings, known as invisible settings, that exposed more of the gemstones and included jewelry such as tiaras and dangling drop earrings, lavaliere and negligee pendants, bar brooches, circle brooches, bangle bracelets, long pearl or bead sautoirs with tassels, and the choker necklace known as the "dog collar." The long chain of pearls (sautoir) were worn in combination with chokers.

Type of metals and gemstones used during the Edwardian period

Platinum was used as a metal in jewelry designing, which enabled manufacture of lightweight designs and together with diamonds and pearls, were used to create intricate and delicate filigree patterns, such as this necklace/tiara. Light and airy designs became the hallmark of Edwardian jewelry. Diamonds and pearls set in platinum were favored because of the "white on white" color scheme. The platinum enhanced the radiance of diamonds and pearls. Diamond cuts employed were rose-cut, mine-cut and old-European-cut. Popular colored stones of the period were sapphires, peridots, chrysoberyls and amethysts. Edward VII's good luck stone, was the Peridot, and jewelry set with peridot became very popular during this period. Queen Alexandra's favorite stone was the amethyst, and was often incorporated in jewelry of the period. Colored stones were often used in a symbolic way to convey a message, such as the use of a combination of green peridot, white pearls and violet amethysts in women's jewelry, the first letters of the color of these gemstones, conveying the message "Give Women the Vote." Green, White and Violet were also adopted as the colors of the women's suffragette movement.

Features of Edwardian jewelry in the natural pearl and diamond necklace/tiara, points to the possible Edwardian origin of the necklace, during the period 1901 to 1920. This is apparently confirmed by the possible period of origin of the pearls incorporated in it, the South Sea pearls from Broome, Australia,  during the period 1880 to 1920. The two periods apparently coincide adding weight to the suggestion that the piece of jewelry probably originated during the Edwardian period.