The natural pearl, diamond and ruby pendent necklace was Lot No. 162 at the Christie's Contemporary Jewelry and Watches Sale, No. 7664, held at the Jumeirah Emirates Towers Hotel, Dubai, United Arab Emirates, on April 29, 2008. The piece was one among 7 lots, out of 15 lots of natural pearl jewelry offered at this auctions, that registered selling prices much above the upper pre-sale estimates, indicating the strong auction market for natural pearls in the Middle East, the main source of natural pearls for the entire world since very ancient times, and until  the early 20th-century, when the introduction of cultured pearls by the Japanese, dealt the final death blow to the ancient industry in the region. 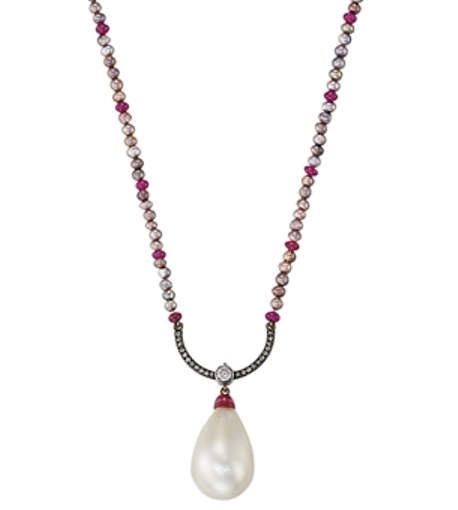 Characteristics of the natural pearl, diamond and ruby pendent necklace

The natural pearl, diamond and ruby pendent necklace has a length of 41 cm (16 inches), which according to the modern system of classification of pearl necklaces is a "choker" whose range of length can vary from 14 inches to 16 inches.

Features of the pear-shaped pearl drop, which is suspended as pendant to the necklace

How the pearl drop is suspended from the necklace ?

A bell-cap made of ruby is mounted on the narrow end of the pear-shaped pearl. The  ruby cap carries a yellow-gold loop or ring at the top, by which the pearl is suspended from the hook of the diamond bow surmount above. The diamond bow surmount is bow-shaped and appears to be made up of silver or platinum. The lowest central portion of the bow is occupied by a circular mount, inside which is mounted an old-European cut diamond with a circular girdle. A hook from below this circular mount accommodates the ring on top of the ruby cap. 22 smaller old-cut diamonds are mounted on the bow surmount, 11 diamonds on either side of the circular mount. Provision has been made at either end of the bow surmount in the form of a loop or ring for the attachment of the necklace. This unique arrangement for suspending the pear-shaped pearl pendant has converted the bow surmount into the lower part of the necklace.

The composition of the necklace

History of the natural pearl, diamond and ruby pearl necklace

The possible period of origin of the necklace, and the possible source of the pearls

The identity of the previous owner of this natural pearl, diamond and ruby necklace is not known. The historical provenance of the necklace is also not known. However certain features in the necklace indicate its possible period of origin. The use of old-European cut diamonds, and other old-cut diamonds possibly point to its 19th-century origin. The color and size of the pear-shaped pearl and the assorted colors  of the seed pearls indicate that the origin of the pearls is the saltwater oyster species Pinctada radiata, the most prolific pearl producer around which the natural pearl industry of the world was based in ancient times. Pinctada radiata and Pinctada imbricata are well known sources of seed pearls. Accordingly, the probable source of the pearls in the necklace, is the Persian Gulf, the Red Sea or the Gulf of Mannar, the hub of the international pearl trade since ancient times. Venezuela is also a possible source, from where seed pearls and other medium sized pearls produced by the Atlantic pearl oyster, Pinctada imbricata entered the world markets in the 16th and 17th centuries, but was later abandoned due to depletion of pearl oyster resources. Pinctada imbricata is now believed to be the same species as Pinctada radiata, with minor regional variations. Thus, if the pearls in the necklace originated after the 17th-century, the most probable source of the pearls is the Persian Gulf or the Gulf of Mannar.

The natural pearl, diamond and ruby pendent necklace which was Lot No, 162, at the Christie's Contemporary Jewelry and Watches Sale, was accompanied by a lab report bearing No. 9808057, dated 13th August 1998, issued by the Gubelin Gem Lab, indicating that the white pear-shaped pearl, weighing 18.58 carats was a natural pearl.

Sale of the natural pearl, diamond and ruby pendent necklace

After the demise of the natural pearl industry in the Persian Gulf region, mainly due to the introduction of cultured pearls by the Japanese in the 1920s and 1930s, the main source of income for the Gulf countries was eliminated. This caused untold hardships and misery for the people of the region who depended on harvesting natural pearls for their livelihood. Not long afterwards, God almighty gave them a new source of wealth, petroleum, which more than compensated for their lost livelihood. Now, with the unprecedented development achieved in these countries using their petroleum resources, the people of the Gulf countries have attained a very high standard of living. But, the simple people of these countries have not forgotten their past, and still try to keep alive the age-old traditions of harvesting natural pearls, as in Kuwait which organizes an annual pearl oyster harvesting festival in the month of June. Perhaps, the strong auction demand for natural pearls in the Gulf region, may be for nostalgic reasons, trying to own something from the past, which invariably originated in this region. Another, explanation for the strong auction demand for natural pearls in this region, is the general dislike of cultured pearls by the people of the region, who believe that they are products of unfair human intervention,  being forced to grow inside the oysters. Practicing a religion that strongly advocates peace with the natural environment gifted by God, the idea of wearing pearls that oysters were forced to grow, was revolting in the Arab mind-set, and considered unethical. However, such prejudices are being gradually overcome, and cultured pearls have now indeed entered the Arab markets.