Among the 25 items of pearl jewelry in the Princess Margaret's jewelry collection, at least 10 pieces incorporated natural pearls in them. This webpage is dedicated to two such pieces of jewelry, that were respectively Lots 161 and 162, at the auction of the renowned collection, at Christie's London, on June 13, 2006.

1) A Pearl and Diamond Necklace

Features of the Necklace

The three-row natural pearl necklace is 42 cm (17 inches) long, which according to the modern system of classification of pearl necklaces, falls under the category of "Princess" with a range of 17 to 20 inches. The name "Princess" seems to be appropriate for the necklace, being once owned by a renowned Princess, who was loved and respected by her people.

Even though the pearls in the necklace are natural, they are described as graduated, being carefully matched for size and shape, the larger pearls being paced in front of the strands and the smaller pearls towards the rear. Matching for size, shape, color, overtones, luster etc. is a difficult task for natural pearls, given the variety of sizes, shapes, colors etc available, the rarity of spherical and near-spherical pearls, and needs a large and unlimited supply of pearls from which one can choose freely. On the contrary in cultured pearls such a task is relatively easier, as the size and shape of the pearls are more regular and consistent and can be controlled by choosing beads of appropriate shapes, the regular turning over of  the beaded oysters, and controlling the grow out period. 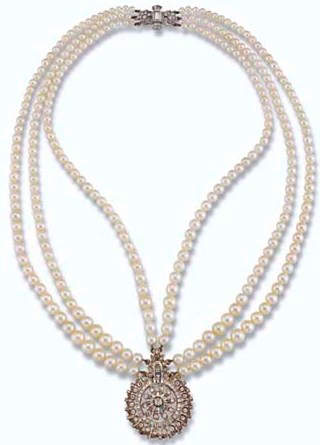 A Pearl and Diamond Necklace

The number of pearls in the necklace and their shapes

The size of the pearls in the necklace in terms of its dimensions and weight are not known. The pearls however appear to be just above the size of seed pearls, around 4 to 5 mm in diameter. Seed pearls are defined as pearls having a diameter of less than 2 mm and weight of less than quarter of a grain (50mg). Even if we assume each pearl in the necklace to have a weight of a quarter grain, which is the cut off point to decide whether a pearl is a seed pearl or not, the total weight of all the pearls become 276 x Â¼ = 69 grains or 17.25 carats (3.45 grams or 3,450 mg). Thus, the minimum estimated total weight of all the pearls in the necklace is 17.25 carats or 69 grains.

The color, overtones, luster and orient of the pearls in the necklace

All pearls in the necklace seem to have the same hue and tone, indicating they are all from the same source, originating from the same species of pearl oyster. The color of the pearls is a silvery-white, where white is the body color of the pearls and silver the overtone color. The luster  and orient of the pearls, caused respectively by reflection and refraction of light, are in keeping with the saltwater origins of the pearls, which is higher than that for freshwater pearls. The color, overtone, luster and orient of pearls are properties dependant on the thickness of nacre, and being natural pearls made entirely of nacre (100% nacre), such properties are optimum for these pearls.

The possible source of the pearls

It is not known whether the necklace was inherited, received as a gift from her grandmother, Queen Mary or her mother Queen Elizabeth Bowes-Lyon, or acquired by the Princess. In any case given the fact that the pearls in the necklace are all natural, the necklace undoubtedly must have been designed before the 1940s, when the last natural pearls from the Persian Gulf entered the international pearl markets, before the industry was totally abandoned. The characteristics of the pearls, such as the size, color, overtone, luster and orient are in keeping with natural pearls produced by the pearl oyster Pinctada radiata, the most prolific pearl producing species in the entire history of the natural pearl industry, whose natural home was the Persian Gulf, the Red Sea and the Gulf of Mannar. Pearls produced by these species were mostly seed pearls less than 2 mm in size, or smaller pearls with an average size of 2 to 8 mm. The color of these pearls were white, cream and yellow, with overtone colors of silver, pink and cream. Silvery-white, pinkish-white, creamy-white, yellow and golden were some of the hues found among these pearls. The desirable silvery-white hues were more common among the pearls originating from the Gulf of Mannar, in Sri Lanka, than in the pearls originating from the Persian Gulf, that tended to have more yellowish hues. Yet the annual quantity of production in the Persian Gulf, being much higher than that of the Gulf of Mannar, the Persian Gulf was the main source of the high-quality silvery-white natural pearls in the world.

The Sale of the Pearl and Diamond Necklace

The Pearl and Diamond necklace was Lot No.161 at the Christie's London auction of Princess Margaret's collection of jewelry and Faberge, held on June 13, 2006. A pre-sale estimate of  Â£4,000 to Â£6,000 was placed on the necklace,  given the natural provenance of the necklace, supported by Laboratory Report No.980084 dated March 20, 2006, issued by the Precious Stone Laboratory, London, confirming that the pearls in the necklace were natural. The necklace registered a selling price of Â£57,600 ($105,984), which was almost 10 times higher than the upper pre-sale estimate. The enhanced price realized was due to a combination of factors, such as the natural provenance of the pearls, the royal provenance of the piece, and above all the "Princess' Premium" generated by her popularity.

Features of the Cluster Ring

The George III, Seed Pearl and Diamond Cluster Ring, is believed to have originated around the year 1790, during the period of rule of King George III, who was the King of the United Kingdom and Ireland from 1760 to 1820. The center of the  cluster is oval-shaped and set with 16 old-cut diamonds. The central cluster of diamonds is surrounded by a border of oval and spherical shaped, white seed pearls, 14 in number. As the central cluster is oval-shaped, the seed pearl border also takes an oval shape. Each of the shoulders of the ring is split into three segments, giving a hexagonal appearance to the entire cluster of diamonds and pearls. The  16 diamonds and 14 pearls are mounted on gold backed by silver foils, a characteristic feature of most Georgian jewelry.

Features of the seed pearls on the ring

The 14 seed pearls mounted on the ring are either spherical or oval in shape. The pearls have a white body color and a luster and brilliance, characteristic of saltwater pearls. The ring is over 210 years old, and the pearls still maintain their luster and brilliance. This is not surprising as the pearls are natural and made entirely of nacre. Thus, properties that are dependent on the thickness of nacre, such as color, overtones, luster and brilliance, and orient, are at optimum levels in natural pearls, and can be preserved indefinitely as long as good care is taken of the pearls.

Features in the ring that confirm their Georgian provenance

Some of the features in the ring that confirm their Georgian provenance are :-

1) The use of white diamonds and pearls on the ring.

2) The diamonds and pearls are backed with gold or silver foil before setting.

Important features of jewelry of the Georgian period

The Georgian period refers to the period of rule of four successive kings of Great Britain, George I, George II, George III and George IV, all from the House of Hanover, whose period of rule extended from August 1, 1714 to  June 26, 1830. Jewelry produced during this period, have certain characteristics that set them apart from other jewelry, and are known as Georgian Jewelry. Some of these characteristics are :-

1) Gold with high carat content was preferred. Silver settings were often used to accentuate the brightness of white diamonds. Alloy of copper and zinc known as "pinchbeck" was introduced as a gold substitute. "Berlin Iron" introduced in 1806, became popular during the Napoleonic wars, as people surrendered their gold for the war effort. Enameling in black, white and blue colors was common.

2) In the early 18th-century, gemstones preferred for setting were diamonds. This coincided with the discovery of diamonds in Brazil, which reached Europe in large quantities during this period. When the Brazilian diamonds were not enough to meet the demand for white diamonds, cheap substitutes such as rock crystal, marcasite, cut steel and glass past copies were produced, whose quality and sophistication even received the approval of royalty, who did not hesitate to wear them in their courts. In the latter half of the 18th-century, colored stones such as rubies, emeralds, sapphires, amethyst, garnet and topaz also became popular, apart from organic gems like pearls, coral and ivory. Faceted gemstones as opposed to cabochon cut ones, were developed during this period. New diamond cuts known as the "Old mine-cut" was developed in the 1700s and the "Old European-cut" the forerunner of the "Modern Brilliant-cut" in the 1800s. These diamond cuts were superior to the point-cut and single-cut developed in the 1300s and the "Rose-cut" and "Briolette-cut" developed in the 1500s. The "Old European-cut"  actually evolved from the "Old mine-cut" in the 1880s during the Victorian period.

3) The style of jewelry adopted was first Rococo, during the reign of George I, followed by Gothic Revival and then Neoclassical.

8) Both men and women wore jewelry during this period. Men wore jeweled buttons on their coat, and jewels on the knees of their breeches, shoe buckles, and pocket watches. Among women the jewelry parure was favored, consisting of a matching necklace, earrings, ring, bracelets, a tiara or aigrette.

Why antique jewelry from the Georgian period are scarce?

Vintage jewelry from the Georgian period are the most scarce and difficult to find. Why are antique jewelry from this period very scarce? What happened to all the jewelry produced during this period that spanned nearly 116 years. Some of the reasons that explain the scarcity of Georgian jewelry are :-

1) As time passed emphasis was placed more on the value of the material used on a piece of jewelry, than the styles employed. Thus, the generations that followed tended to meltdown Georgian pieces, disregarding the archaic value of their designs, and went in for more modern and contemporary dessigns.

2) The life expectancy during the Georgian period was very short, as modern medicine was yet to evolve. During this period most of the population were still poor, and only the aristocrats and the rich could afford to wear jewelry. Thus, not many jewelry pieces were produced as in the subsequent periods, like the Victorian period, when the industrial revolution, created more affluence, and more people could afford to buy jewelry. During the Georgian period, even among those who could afford to wear jewelry, the shortened life span prevented the building up of large collections of jewelry.

Sale of the George III Seed Pearl and Diamond Ring

The George III Seed Pearl and Diamond Ring was Lot No.162 at the Christie's London auctions of Princess Margaret's collection of jewelry and Faberge, held on June 13, 2006. A pre-sale estimate of Â£800 to Â£1,200 was placed on the ring, a modest estimate given the antiquity of the piece of jewelry, dating back by over 200 years. However, the piece registered an enhanced price of Â£11,400 ($20,976), almost ten times the upper pre-sale estimate, not because of the antiquity of the piece, but because of the "Princess' Premium" being once owned by a Princess loved and respected by the people, who vied with each other as one journalist put it, "to own a slice of Princess Margaret's life."

5) History of the usage of plant and animal motifs in jewelry designs - The Tarantula Brooch. www.internetstones.com