1) A FRESHWATER PEARL AND DIAMOND BROOCH, BY JOHN DONALD - Lot 48.

Features of the John Donald Brooch

The design of the Freshwater Pearl and Diamond Brooch is an abstract design, characteristic of the novel design features introduced by John Donald, who revolutionized traditional British jewelry designing in the 1960s and 1970s. The center of the brooch is occupied by an openwork cluster of freshwater pearls and brilliant-cut diamonds. There are 20 freshwater pearls and 10 brilliant-cut diamonds in the cluster. The cluster of pearls and diamonds is surrounded by an 18-carat gold, textured border radiating square tubes. The brooch that was designed around the year 1970, carries English hallmarks for 18-carat gold.

Designer John Donald who had the privilege of receiving royal patronage for his novel jewelry creations in the 1960s, invited Lord Snowdon and his wife H.R.H. Princess Margaret for the opening ceremony of his new John Donald shop, a joint venture with Tecla Pearls, known as "John Donald with Tecla" on Old Bond Street in 1970. On this occasion Lord Snowdon declared open the shop, and John Donald presented this freshwater pearl and diamond brooch, as a gift to H.R.H. Princess Margaret, in appreciation of her kind gesture in gracing the occasion. 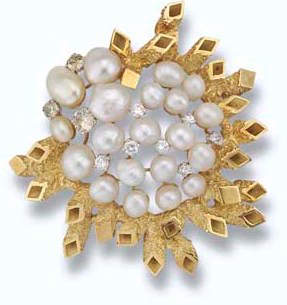 Features of the freshwater pearls in the brooch

The probable source of the freshwater pearls

The most probable source of the freshwater pearls in the brooch, is the United Kingdom itself, Scotland, being the most ancient source of freshwater pearls in the world, that tempted Julius Caesar to invade Britain in the  year 55 B.C. The pearls originated in the freshwater mussel Margaritifera margaritifera, that usually inhabited the fast flowing rivers and streams of Scotland, and also to some extent England, Wales and Ireland. The River Tay, the longest river in Scotland, was one of the main habitats of the freshwater mussel, that produced large quantities of freshwater pearls over the centuries. The mussels lie buried or partially buried in coarse sand and fine gravel, with their siphons exposed. Such fast-flowing rivers provide abundant supplies of oxygen and suspended food particles for the successful growth of the mussels. These mussels that live for over a hundred years, can grow to a maximum length of 12-15 cm, reaching maturity after 10-15 years, when the length reaches 6-7 cm. For the successful completion of their life cycles, these mussels need a fish host, which is usually the Atlantic salmon, the brown trout or sea trout.

The history of exploitation of freshwater mussels in Britain, and the probable period in which the pearls in John Donald's brooch were discovered

The history of exploitation of the freshwater mussel Margaritifera margaritifera dates back to the pre-Roman period over 2,000 years ago. As mentioned earlier, during the Roman period, Julius Caesar invaded Britain in 55 B.C. mainly to take control of the trade in Scottish freshwater pearls, as in the Roman empire, gold together with pearls, underpinned the Roman monetary system. During the medieval period, in the 12th-century, Scottish freshwater pearls appeared in large quantities in the pearl markets of Europe, where there was a great demand for such pearls. In the 16th-century the commercial exploitation of freshwater mussels turned into a major industry in Britain, with mussels being exploited not only in Scotland, but also England, Wales and Ireland. During this period the government appointed River Bailiffs to supervise the exploitation, and to make sure that all valuable pearls reached the King's treasury. Thus, during this period Scottish pearls of exceptional quality entered the crown jewels of both England and Scotland. The commercial exploitation of freshwater mussels continued until the 19th-century, but soon overexploitation made the fishery unsustainable and was totally abandoned. However, small scale pearl fishery, by individual pearl divers, and gypsies in Britain and Ireland, continued well into the 20th-century, until a total ban was imposed on pearl fishing in 1998. It appears that most of the freshwater pearls in John Donald's brooch were most probably discovered in Scotland during this period of small scale pearl fishery, that lasted until 1998.

Sale of the John Donald Brooch

The John Donald Brooch, which was Lot No.48, at the Christie's historic London sale of June 13, 2006 - in which nearly 200 pieces of jewelry and Faberge from the collection of H.R.H. Princess Margaret was put up for sale by her children - sold for Â£15,600 ($28,704), which was almost 20 times higher than the upper pre-sale estimate of Â£800. The enhanced price realized was in keeping with the skyrocketing trend shown at the auction, beginning right from Lot No.1, attributed to what was known as the "Princess' Premium" generated by her popularity, as well as royal provenance.

Features of the Enamel and Seed Pearl Ring

The antique ring made of 18-carat gold, has a ring size "M" which is equivalent to USA size 6, with a diameter of 16.51 mm and circumference of 51.5 mm. Birmingham hallmarks for 18-carat gold and the year 1891, the year of hallmarking, and probably the year of designing the ring, appears on the inside of the ring. Thus, the ring had been designed in the late Victorian period (1890-1901) or the Art Nouveau period in France (1890-1915).The surface of the ring is bezel-set with seed pearls, surrounded by a rim of metal, and the gaps coated with black enamel. There are nine seed pearls mounted on the ring. Except for the central seed pearl which is slightly larger, all other seed pearls are small. The seed pearls are white in color and have the luster and orient of natural saltwater pearls. The enamel and seed pearl ring is accompanied by a black leather case, stamped with the crest of the Girl Guides. Princess Margaret acquired membership of both the Brownies and Girl Guides, and in 1965 became the President of the Girl Guides Association. Thus, in all probability the Enamel and Seed Pearl Ring, was a gift given by the Girl Guides Association, to honor one of their presidents. It was because of this reason it was stated in the auction catalogue, that proceeds from this lot will be donated to charity. 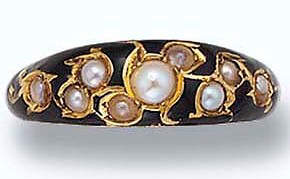 Source of the seed pearls

Sale of the Enamel and Seed Pearl Ring

The Antique Enamel and Seed Pearl Ring, was Lot No.88 at the Christie's London Sale of Princess Margaret's collection of jewelry and Faberge, held on June 13, 2006. A pre-sale estimate of £100 to £150 was placed on the ring. However, in keeping with the enhanced prices recorded for the lots of the auction, the ring sold for £6,600 ($12,144), forty-four times higher than the upper pre-sale estimate. The proceeds from this lot was donated to charity, as stated in the catalogue.

When was the Antique Garnet and Seed Pearl Brooch designed ?

The Antique Garnet and Seed Pearl Brooch was designed around the year 1860. However, the use of the deep-red garnets on the brooch, show clearly that it belongs to the mid-Victorian Period (1861-1890), that was marked by a double tragedy, the death of Queen Victoria's mother, followed by the death of her husband Prince Albert in the year 1861, that thrust the Queen and the entire nation into a state of mourning. During the first year of mourning in 1862, full mourning black clothing and black jewelry were worn by the mourners. After the first year of mourning, in 1863, half-mourning colors such as grey, mauve and purples were used for clothing, and dark stones, such as onyx, jet, vulcanite, amethyst and deep-red garnets were used in mourning jewelry. Thus, the Antique Garnet and Seed Pearl Brooch, is a piece of half-mourning jewelry, designed in 1863 or afterwards, in the mid-Victorian period. 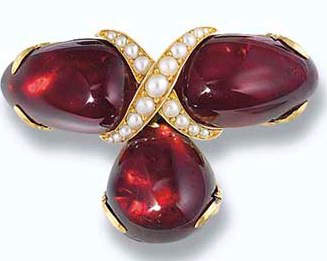 There are three deep-red cabochon-cut garnets on the brooch. Two of these garnets that lie horizontally are oval-shaped, and almost of the same size. They are held together by a crossover seed pearl motif at the base, and two claws at the other end. The X-shaped motif has a large, round, white, seed pearl at the intersection, and four progressively smaller, round, white, seed pearls on the four arms, making a total of 17 seed pearls. The third cabochon-cut, deep-red garnet, is pear-shaped or drop-shaped, and suspended as a pendant from below the crossover seed pearl motif. The brooch has a width of 4.2 cm. There is a locket compartment on the reverse of the brooch, a feature common in pieces of jewelry of this period, such as pendants, and brooches.

The source of the seed pearls

The Garnet and Seed Pearl Brooch was designed in the year 1863 or afterwards, in the mid-Victorian period. Around this time the only source of seed pearls in the world was the Persian Gulf and the Gulf of Mannar, produced by the saltwater oyster, Pinctada radiata, a prolific pearl producer of not only medium sized pearls, varying in size from 2 to 8 mm, but also significant quantities of seed pearls that were less than 2 mm in diameter. The use of seed pearls in jewelry became very popular during the early-Victorian period, also known as the Romantic Period, that extended from 1837 to 1860, covering the period of Queen Victoria's youth, courtship, marriage, and early family life, until the death of her beloved husband, Prince Albert in 1861. The seed pearls used in jewelry of this period came from either the Persian Gulf, the Red Sea or the Gulf of Mannar.

The sale of the Antique Garnet and Seed Pearl Brooch

The Antique Garnet and Seed Pearl Brooch, was Lot No.89, at the Christie's London sale of Princess Margaret's collection of jewelry and Faberge, held on June 13, 2006. A pre-sale estimate of £500 to £700 was placed on the brooch. However, the brooch recorded an enhanced price of £9,600 ($17,664), in keeping with the record high prices realized for the other lots in the auctions. This was almost 14 times higher than the upper pre-sale estimate of £700.

4) History of the usage of plant and animal motifs in jewelry designs - Tarantula Brooch. www.internetstones.com