Features of the Ring

The antique ring has a British ring size of K½, which is equivalent to 5⅜ USA ring size, with a diameter of 16 mm and circumference of 50 mm; and Japanese ring size 10. The main component of the ring is a large natural drop-shaped baroque pearl, which is incorporated as its centerpiece, and held in place by a unique snake motif, represented by a diamond studded snake, coiling around the drop-shaped baroque pearl. The pearl is connected to the pear-shaped head of the ring by a bell-cap arrangement from its narrower end. The head of the snake lying somewhere in the middle of the broader end of the pearl, is mounted with a cabochon-cut, oval-shaped, deep-red garnet. The circular diamonds mounted on the snake are rose-cut diamonds. The size of the diamonds decrease gradually from just below the head of the snake, towards the tail. The diamonds and the garnet appear to be bezel-set on the snake, surrounded by a rim of metal. This was one of the earliest methods of setting gemstones into jewelry. The metal used on the ring is silver, platinum or white gold. 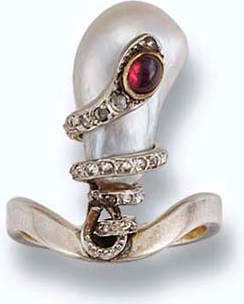 Features and possible source of the pearl

The pearl is drop-shaped, yet baroque, as the right side of the pearl towards its broader end, as seen in the photograph, bulges out more than the corresponding area on the left side. The color of the pearl is silvery-white. The dimensions and weight of the pearl are not known. The luster and orient of the pearl is in keeping with its saltwater origin. Being an antique piece, the pearl would probably have originated from one of the traditional sources of saltwater pearls in the past, such as the Persian Gulf, the Red Sea or the Gulf of Mannar.

Possible period of origin of the ring

The metal used on the ring could give a broad indication as to the possible period of origin of the ring. If the metal used in the ring was silver, the ring could have originated anytime during the long  history of mankind, starting from Ancient Egypt (3,000 B.C -1,000 B.C.) and Mesopotamia (3,000 B.C.-  2,000 B.C.), when silver jewelry first appeared to the contemporary period, when silver is still being used in jewelry. However, if the metal used in the ring is platinum or white gold, the period of origin of the ring, is definitely early 20th-century. Platinum was extensively used in jewelry crafting only during the Belle Ã‰poque period, also known as the Edwardian period, that extended from 1901 to 1920. White gold was first used in jewelry in the 1920s, after the alloy based on gold-nickel-palladium, was developed as a cheap alternative to platinum, which became popular during the Edwardian period.

The snake motif can also give an indication as to the possible period of origin. There were two periods in the history of jewelry, when the snake and serpent motif was very popular. The first was during the Early Victorian or Romantic Period (1837-1860), that corresponded with Queen Victoria's youth, courtship, marriage, early family life and until the death of her beloved husband Prince Albert in 1861. A revival of naturalistic themes in jewelry that were first introduced during the Renaissance, replacing religious symbols, took place during this period. Popular plant motifs used in jewelry were flowers, bouquets of flowers, branches, leaves, grapes and berries. Popular animal motifs used during this period, included the snake and serpent motif, love and song birds and insects. Snakes in their coils, were symbols of eternity and commitment, a belief that arose from German/Scandinavian traditions. The snake motif was used on rings, bracelets, necklaces, brooches and stickpins; and was depicted as coiled serpents or snakes, holding or guarding a pearl or other precious gem. Queen Victoria's engagement ring from Prince Albert, was in the form of a serpent, the symbol of eternity and commitment, as believed by the Germans. Jewelry were still hand manufactured during this period, and metals used included 18k to 22k gold, tri-color gold, silver and rolled gold. Gemstones used on jewelry were rose-cut and old-European cut diamonds, and colored stones such as ruby, emerald, sapphire, garnet, turquoise, amethyst, pink and golden topaz, chalcedony, peridot, zircon, citrine, aquamarine, corals and seed pearls.

Features in the ring that point to its possible early-Victorian origin are as follows :-

1) The snake motif of the ring, guarding a pearl.

2) The use of rose-cut diamonds and cabochon-cut garnet.

3) The bezel setting of the diamonds and garnet on the serpent, one of the earliest methods of setting gemstones into jewelry.

The second period during which the snake and serpent motif became very popular, was during the Art Nouveau Period from 1890 to 1920, which overlapped with the Edwardian period (1901-1920) in Britain. Apart from the feminine form which was highly celebrated during this period, natural motifs were also very popular. Animal motifs included insects, birds and reptiles. Common insect motifs included bees, dragonflies and butterflies; bird motifs, peacocks and swans; and reptile motifs, snakes and serpents. Plant motifs included, undulating vines, ferns, leaves of Gingko biloba, and flowers such as orchids, irises, water lilies, poppies, ivy etc. Apart from gold and silver, platinum was introduced during this period, and white gold in the 1920s during the Art Deco period. Thus, if the metal used in the snake ring is platinum, the origin of the ring is from the Art Nouveau Period (1890-1920), and if the metal used is white gold, its origin becomes Art Deco, despite the presence of other antique features, such as the rose-cut diamonds and the bezel settings.

Sale of the Pearl and Gem-Set Snake Ring

The Pearl and Gem-Set Snake Ring was Lot No.91, at the Christie's London Sale 7335, of Princess Margaret's jewelry and Faberge collection, held on June 13, 2006. A pre-sale estimate of £700 to £900 was placed on the antique snake ring, which was indeed a bargain considering the historic provenance of the piece. However, the snake ring sold for an enhanced price of £12,000 ($22,080), not because of its 19th-century historic provenance, but because of the so-called "Princess' Premium" the demand created by her popularity, and the urge to own something that was once used by a Princess, whom they loved and respected.

Features of the Pearl and Ruby Cluster Ring

The cluster ring executed probably in 18-carat yellow gold, has as its centerpiece a cluster, consisting of a centrally placed octagonal-cut ruby, surrounded by six baroque, white, seed pearls, with curved or round outer surfaces. On either side of the central cluster, is a carved foliate motif shoulder, somewhat triangular-shaped, also set with three oval-shaped, baroque seed pearls, smaller than the central seed pearls. Another smaller ruby appears to be mounted between the central cluster and the two shoulders. 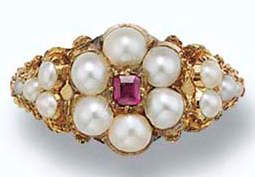 The baroque shaped seed pearls are 2 mm or less in size, in keeping with the definition of seed pearls. They are natural, as all seed pearls are, whether formed in the wild or as a by product of pearl culturing. The seed pearls mounted on this ring appear to have been harvested in the wild. Such harvesting of natural pearls from saltwater oysters occurring in the wild, had been taking place in different parts of the world, since very ancient times. The most ancient of these sources being the Persian Gulf, the Red Sea and the Gulf of Mannar, where sustainable exploitation of oysters had taken place for thousands of years, using primitive techniques, without damaging the natural habitat of the oysters. Such exploitation took place until around 1910 in the Gulf of Mannar, and up to around the 1940s in the Persian Gulf. In contrast the intensive exploitation of pearl oysters in Venezuela, by the Spanish, after the pearl banks were discovered by Christopher Columbus in 1498, led to total depletion of resources within 150 years, until the exploitation was abandoned around 1650. Significant quantities of seed pearls were discovered in all these historical pearl banks, and seed pearls usually occurred in clusters inside the oysters.

The art of drilling seed pearls were mastered by the artisans of Asia countries, such as India, Persia, and the Arab nations, and these seed pearls were strung into long strands, and used as interior decorations or transformed into spectacular twisted rope necklaces, comprising strands of different colors. The seed pearls were also used for embroidery work on royal robes or expensive carpets. Even in Britain in the 16th-century royal gowns and robes were embroidered with seed pearls, and Queen Elizabeth I, is reported to have owned at least 3,000 such gowns. However, the use of seed pearls in jewelry reached its climax in the early-Victorian period also known as the Romantic period, between 1837 and 1860. Seed pearls were considered as a symbol of purity and innocence, and seed pearl jewelry were often given as presents to young unmarried virgin girls, especially on their 18th birthday, and young virgin brides.  Seed pearl jewelry were also worn on special occasions through out a woman's married life. Seed pearl jewelry of this period were often produced in matching sets or parures, consisting of a necklace, pendant earrings, brooches and bracelets, with yellow gold accents ad clasps.

Possible source of the seed pearls on the ring

The period of origin of the Seed Pearl and Ruby Ring is not known, but it appears to be relatively modern from the type of setting and workings employed. However, whether it originated in the 19th or 20th century, the main source of seed pearls during this period was the Persian Gulf, the Red Sea or the Gulf of Mannar, as the sources of seed pearls in the New World had already been exhausted. The seed pearls on the ring do not look like "keshi" pearls, a by product of the Akoya pearl culturing industry in Japan, which are also considered by some to be natural seed pearls, even though the CIBJO, the International Confederation of Jewelry considers them as non-beaded cultured pearls formed accidentally or intentionally by human intervention in marine pearl oysters such as the Akoya pearl oyster.

Sale of the Seed Pearl and Ruby Ring

The Seed Pearl and Ruby Ring was Lot No.96, at the Christie's London Auctions of Princess Margaret's collection of jewelry and Faberge, held on June 13, 2006. A pre-sale estimate of £600 to £800 was placed on the ring, but in keeping with the enhanced trend shown at the auctions, the lot was sold for £5,040, six times more than the upper pre-sale estimate.

6) History of the Usage of Plant and Animal Motifs in Jewelry - Tarantula Brooch. www.internetstones.com