Some Pieces of Natural Pearl Jewelry that appeared at the Sotheby's Magnificent Jewels Auction held April 17, 2008

1) A Pair of Diamond and Pearl Pendant Earclips.

2) A Pair of Diamond and Seed Pearl Lattice-work Earrings.

1) A Pair of Diamond and Pearl Pendant Earclips

The description of the pendant earclips

The diamond and pearl pendant ear-clips are designed as clusters of grapes and leaves motif, a naturalistic theme common during the 19th and early 20th centuries. The trifoliate top of the ear-clips are set with old European-cut diamonds The pendant portion begins with a large near-spherical or button-shaped beaded pearl, through which is suspended four tiers or whorls of leaves and grapes, represented by baroque pearls. Each whorl has three leaves, also set with old European-cut diamonds. Six baroque pearls representing grapes are suspended from below each of the whorls. One of these pearls is beaded, through which the connecting wire passes. The size of the whorls decrease gradually from top to bottom. Each of the pendants end with a large drop-shaped pearl. There are altogether 26 pearls in each pendant - 24 baroque pearls in the four whorls, a single button-shaped pearl at the top and a single drop-shaped pearl at the bottom. The total weight of the diamonds in both pendant ear-clips is approximately 7.00 carats. The total weight of the pearls are not known. The metals used in the ear-clips are white and yellow gold. 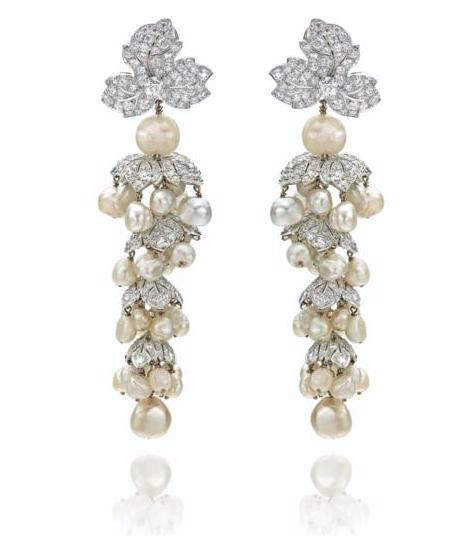 A pair of diamond and pearl pendant earclips

The pendant ear-clips are without any doubt antique jewelry pieces, but the period of origin is not known. However, the design features and the type of materials used in the pendant may perhaps give an indication as the possible period of origin. The use of only old European-cut diamonds on the pieces, points to their possible 19th-century provenance, a period during which the cut was introduced and became very popular. The old European-cut that was the forerunner of the modern brilliant-cut has a circular girdle like the latter, but has a heavy crown with a very small table, and a very tall overall depth. Some of the diamond cuts and the periods in which they were introduced and became popular are as follows :- Point-cut - early 1300s; Single-cut - Late 1300s; Rose-cut & Briolette-cut - 1500s; Old mine-cut - 1700s; Old European-cut - 1800s and Modern round brilliant-cut - 1900s. However, it must be remembered that the introduction of a new cut did not mean that all previous cuts were totally forgotten. The Single-cut, first introduced in the early 1300s was prevalent even in the 1900s and persisted well into the 20th-century.

The overall naturalistic theme points to the possible period of origin of the piece - early-Victorian, late-Victorian or Art Nouveau periods

The overall design of the pendant ear-clips, may give an indication as to which period in the 1800s the piece was created. The naturalistic theme of the design, the cluster of grapes and leaves motif, may perhaps indicate that the piece originated in the early-Victorian or Romantic Period, between 1837 to 1860, or during the late-Victorian (1890-1901) and Belle Ã‰poque (1901 - 1915) periods. The combination of late-Victorian and Belle Ã‰poque periods was known in France as the Art Nouveau period, that originated somewhere around 1890 and ended in 1915. Popular plant motifs during the early-Victorian period were flowers, bouquets of flowers, branches, leaves, grapes and berries. Animal motifs included the snake and serpent motifs, love and song birds and insects. During the late-Victorian period (1890-1901), the Darwinian controversy and new botanical discoveries, once again popularized jewelry motifs, based on natural themes, such as plants and animals. Some of the popular designs included gem-set butterflies, enameled beetles and gold houseflies. During the Art Nouveau period the plant motifs included undulating vines, leaves, ferns and a variety of flowers such as orchids, irises, water lilies, poppies, ivy etc. Animal motifs included insects such as butterflies, dragonflies and bees; birds such as peacocks and swans; and reptiles such as snakes.

Metals used in the Diamond and Pearl Pendant Earclips, and their significance

The metals used in the pendant ear-clips are white and yellow gold. The use of yellow gold was common for early-Victorian, late-Victorian and Art Nouveau periods. However, white gold was first introduced only in the 1920s, as an alternative to platinum. White gold is made by mixing pure gold with other metals, such as silver, nickel, palladium, zinc etc. White gold was a cheaper alternative to platinum, and a stronger alternative to silver. White gold is used to enhance diamonds and colored gemstones. The trifoliate top of the pendant ear-clips and the three leaves in each whorl appear to be made of white gold, that enhances the old European-cut diamonds set on them. Yellow gold appears to have been used in this design for the hooks used in the suspension of the baroque pearls, the drop-shaped pearls as well as the entire pendant to the trifoliate top.

Thus, unless there was a re-setting of the old European-cut diamonds on white gold at a later date, the use of white gold on the piece clearly indicates the possible origin of the piece as the 1920s or thereafter, which is contrary to what other evidences had revealed previously. The period 1920 to 1935 was known as the Art Deco Period. During this period, long earrings were popular, along with diamond watches, pearls, beads, and cocktail rings. Emeralds, sapphires and rubies became the gems of choice in Art Deco jewelry. Thus, it appears that the Diamond and Pearl Pendant Ear Clips originated during the Art Deco period, even though the diamonds used on the pieces were old European-cut diamonds.

The sale of the Pair of Diamond and Pearl Pendant Earclips

2) A Pair of Diamond and Seed Pearl Lattice-work Earrings

Description of the Diamond and Seed Pearl Earrings 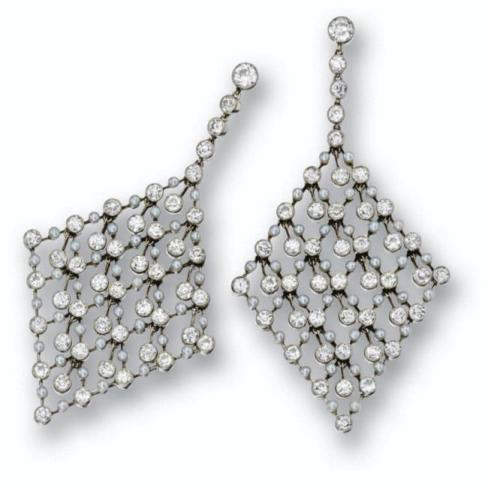 A pair of diamonds and seed pearl earrings

The Provenance of the Diamond and Seed Pearl Earrings

Unlike the diamond and pearl pendant earclips considered previously, whose origins were debatable based on different lines of evidence, the pair of diamond and seed pearl earrings has a clear-cut provenance based on its lattice work design, which was popular only during the Art Deco period, that extended from 1920 to 1935. Thus, the diamond and seed pearl earrings with its lattice work design belong to the Art Deco period. Art Deco was a style revolution of straight lines and angles over curved and fluid lines, and bold colors over soft and muted ones. Art Deco was inspired by a combination of influences, such as, Asian, Islamic and Indian Art; African and Egyptian Art; Cubism in the art world and architecture. Some of the designs of this period are the lattice motif (Islamic), pagoda (Indian), dragons (Chinese), sphinx and falcon (Egyptian) etc. Precious metals used for the jewelry were platinum, white gold and tricolor gold. Gemstones used were diamonds, pearls, emeralds, rubies and sapphire. Some of the popular pieces of jewelry were, the diamond straight-line bracelet, long earrings, diamond watches, cocktail rings etc. Bakelite, an early plastic was used as a material for costume jewelry, such as pins, earrings, necklaces and pendants, in geometric, floral and fruit designs. The lattice motif combined with the length of the earrings, provide incontrovertible evidence for the Art Deco provenance of the earrings, despite the use of old European-cut diamonds and seed pearls that were more popular in the 19th-century.

The Sale of the Diamond and Seed Pearl Lattice-work Earrings

The pair of diamond and seed pearl lattice-work earrings was allotted Lot No. 215, at the Sotheby's Magnificent Jewels Sale, held on Thursday, April 17, 2008. A pre-sale estimate of USD 15,000 to 20,000 was placed on the item. However, the lot remained unsold at the auction.

Description of the Seed Pearl and Diamond Choker Necklace 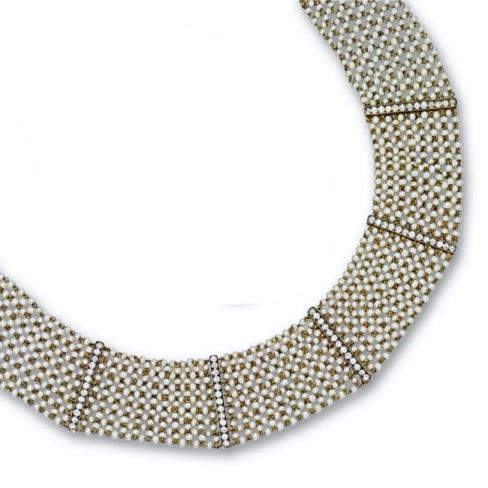 The Provenance of the Seed Pearl and Diamond Choker

The origin of the necklace is said to be approximately 1900. This falls within the late-Victorian period (1890-1901) and Belle Epoque period (1901-1915). The two periods together from 1890-1915 was known as the Art Nouveau period in France. Seed pearl jewelry reached the height of its popularity during the early-Victorian period between 1837 to 1860. After the mid-Victorian mourning period (860-1890), jewelry designing again reached its full expression in diverse designs, a period known as the Aesthetic or late-Victorian period (1890-1901). Princess Alexandra, Queen Victoria's daughter-in-law became the royal trend-setter. Among the jewelry designs popularized by Princess Alexandra were the star and crescent motif, and the dog-collar design known as the choker, encrusted with diamonds, pearls, corals, sapphires and turquoise. The origin of the seed pearl and diamond choker above may also be related to this period, when the popularity of the choker was at its peak.

Sale of the Seed Pearl and Diamond Choker

The seed pearl and diamond choker necklace was listed as Lot No. 217 in the catalogue published by Sotheby's for the April 17, 2008, Magnificent Jewels auction, held in New York. The pre-sale estimate of the necklace was placed between USD 10,000 to 15,000. However, the necklace remained unsold at the end of the auction.

You are welcome to discuss this post/related topics with Dr Shihaan and other experts from around the world in our FORUMS (forums.internetstones.com

5) A History of Antique Jewelry - www.topazery.com