The Nepal diamond gets it's name from the Kingdom of Nepal, a landlocked country lying along the southern slopes of the Himalayan mountain ranges, on the north-eastern border of India, wedged between two giant neighbors India and China. The diamond is reported to have remained with several generations of Royal Families of Nepal. 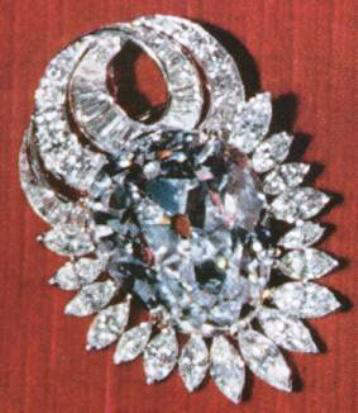 Absolutely colorless diamonds without any trace of a yellow tinge are type IIa diamonds also known as D-color or top-color diamonds. They are said to be the "purest of the pure"of all diamonds, as they are nitrogen-free and have perfectly formed crystals without any structural deformations. The presence of nitrogen and structural deformations are two factors that impart colors to diamonds.

Information on the early history of the diamond is scarce, but the diamond is believed to have originated in the alluvial diamond mines in Kollur, near Golconda, in Southern India. The Kollur mines were discovered in the mid-16th century around 1540 to1560 A.D. At the time Tavernier visited Golconda in 1642, more than 20 mines were being worked, employing over 60,000 people. Most of the mines were extraordinarily rich, and produced the best quality colorless as well fancy colored diamonds, such as pink, blue and yellow. Golconda diamonds were renowned for their color and clarity, that the name Golconda entered the terminology in the past to refer to the best quality diamonds irrespective of their country of origin.

Golconda was the capital of the Qutb Shahi Kingdom, one of the five Muslim Sultanates of the Deccan region of India, from 1512 to 1687. The diamond mines of Golconda were fully exploited during this period, possibly assisted by the expertise and ready markets provided by the Persians, with whom they had close cultural and economic ties. The diamonds mined during this period at Golconda, eventually ended up in three possible locations:- (1) The capital of the Persian Empire, (2) The capital cities of Agra and Delhi of the Mogul Emperors, (3) The capital cities of different monarchies of Europe, such as London, Paris, St. Petersburg, Florence, Austria-Hungary, Madrid, Lisbon, Amsterdam, etc. Many Persian and European diamond dealers who were active in the areas of Golconda and other diamond producing mines on the eastern side of the Deccan Plateau were responsible for much of movement of diamonds to the West and Persia. Even Jean Baptiste Tavernier, the 17th century French traveler and jeweler who made up to six trips over a period of 40 years, and visited the diamond producing areas of Golconda, and the diamond cutting centers of Ahmedabad, was partly responsible for the movement of many notable diamonds to the capital cities of Western Monarchies.

But, the Nepal diamond instead of taking the traditional western route, moved northwards, and eventually found it's home in the Royal Palaces of the Kings of the Malla Dynasty of Nepal, who ruled the country between the 10th and 18th centuries, assuming that the diamond left Golconda in the 17th century when the mines were having peak production outputs. Some of the Malla Kings include Jaya Sthiti (1382-95 A.D) and Yaksha Malla (1429-82 A.D.). Yaksha Malla divided his Kingdom among his three sons, creating three independent principalities known as Kathmandu, Patan, and Bhaktpur. Several smaller principalities were also subsequently created to accommodate other high-caste Hindu Families connected to the Royal family. The status quo continued until the early 18th century, when the Malla Kings were replaced by the Gurkha Sha family , whose first ruler the Great Prithvi Narayan Shah re-united the Kingdom and moved the capital to Kathmandu, laying the foundation for the modern state of Nepal. The Shah rulers reigned from 1769 to 1806, after which they were relegated to an honorary position, and effective authority was wielded by the Thapa family (1806-37) and later by the Rana family (1846-1950). After the withdrawal of the British from India in 1947, the Rana family who were hitherto protected by the British were ousted by the anti-Rana forces and monarchists based in India, and the Monarchy was effectively restored in November 1950.

The Nepal diamond which had passed down several generations of Nepal rulers, eventually found it's way to the west, after it's purchase in 1957 from an Indian dealer, by Harry Winston Inc. Of New York. Mr. Winston had the diamond slightly re-cut from it's original weight of 79.50 carats to it's present weight of 79.41 carats, to improve it's brilliance. The stone was featured in an issue of the National Geographic Magazine in April 1958, in which the price of the diamond set in the pendant as shown in the photograph, was quoted as $ 500,000. Later in 1959 at an exhibition known as the "Ageless Diamond"exhibition, jointly sponsored by Christie's and De Beers in London, the Nepal diamond was one of the few breathtaking exhibits that drew a lot of attention.

After the "Ageless Diamond"exhibition Mr. Harry Winston sold the diamond to an anonymous European client, set in a V-shaped diamond necklace, that also contained 145 smaller, round diamonds weighing 71.44 carats