Rare gem sells for £5.6m at auction held by Sotheby's, despite concerns about economic downturn 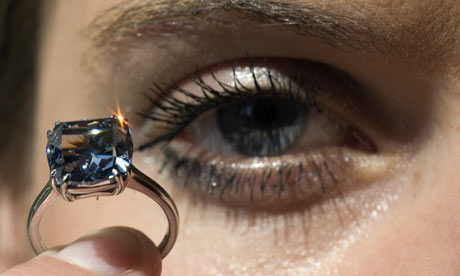 A model displays the vivid blue diamond during an auction preview at Sotheby's in Geneva. Photograph: Denis Balibouse/Reuters

A flawless blue diamond weighing 7.03 carats sold for 9.3m Swiss francs (£5.6m) last night – the highest price ever for a gem of its kind, according to auctioneers Sotheby's.

The successful bidder, who will have the right to name the diamond, will pay around 10.5m francs including commission.

The gem, mounted in a platinum ring, is shaped like a cushion and is one of only a few blue diamonds ever found – only red diamonds are rarer. It was discovered last year in a mine in South Africa where workers say conditions have deteriorated in the months since the gem was found. The pre-sale catalogue estimate was 6.8m to 10m francs, excluding commission.

David Bennett, head of jewellery for Sotheby's Europe and Middle East, admitted that with the gloomy economic situation at the moment he was "a little bit concerned" at how the sale would go.

The previous record price for a fancy vivid blue diamond was $7.9m, including commission, for a stone weighing 6.04 carats at a sale in Hong Kong in October 2007, also by Sotheby's.

"It is fantastic in this market and shows that these rare things are very much in demand."

Only 266 lots out of 346 sold at Sotheby's, indicating that the global downturn had affected spending.

On average, the rings, bracelets and necklaces on offer sold for almost 10% less than expected. But Bennett said the total sales of 39.5m Swiss francs showed "the resilience of fine jewels".

Our editors' picks for the day's top news and commentary delivered to your inbox each morning.

Send to a friend

Short link for this page: http://gu.com/p/27jff

On the Guardian today