Nur-ul-Ain in the Persian and Arabic languages mean "the light of the eye". This is the name given by the Persians, probably after the arrival of the stone in Persia, together with the loot plundered by Nadir Shah and his men, after the capture and sacking of Delhi and Agra in 1739. The name by which the diamond was known while it remained with the the Mogul Emperors in India is not known. 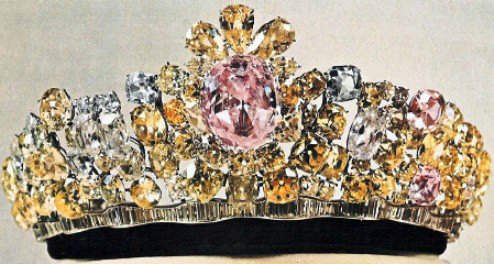 The diamond is a pale pink, oval brilliant-cut stone, weighing around 60 carats, and having dimensions of 30 x 26 x 11 mm.

Being a pink diamond, the Nur-ul Ain is a type IIa diamond, free of nitrogen impurities, but the crystal had undergone plastic deformation during it's formation and subsequent rise to the surface from deep inside the earth. The plastically deformed areas absorb visible light in a particular region of the visible spectrum that imparts the pink color. However their occurrence is much less than 0.1 % of all naturally occurring diamonds. In fact in the Argyle mines in Western Australia, the mine that produces most of the pink diamonds in the world today, only one carat of pink diamond is produced for every 1,000,000 carats of rough diamonds. This works out to an astonishingly low occurrence of 0.0001 %.

The "Nur-ul-Ain"and the "Darya-i-Nur"(Ocean of Light) diamonds are two of the most celebrated diamonds among the Iranian Crown Jewels. The "Nur-ul-Ain"adorns the tiara designed by Harry Winston for Empress Farah Diba's wedding to Mohammed Reza Shah Pahlavi, the last Shah of Iran, in 1958. The Darya-i-Nur is mounted on an elaborate frame, set with 457 diamonds and 4 rubies, surmounted by the Aryan symbols of the lion and the sun, a unique setting that was designed and executed during the reign of Shah Nasser-ed-din (1848-1896).

The Nur-ul-Ain and the Darya-i-Nur are believed to be non-identical twins of the same rare, pale pink, enormous, 400-carat diamond, referred to as "Diamanta Grande Table"(the Great Table Diamond), by Jean Baptiste Tavernier, the 17th century French traveler and jeweler, who had seen it at Golconda in Andhra Pradesh, South India, in 1642. A team of Canadian experts from the Royal Ontario Museum, who conducted research on the Iranian Imperial Jewels in 1965, postulated that the Darya-i-Nur is the major portion of the Great Table Diamond seen by Tavernier in 1642 and later mounted on the Peacock Throne of Mogul Emperor Shah Jahaan (1628-58), which was later plundered by the Persian conqueror Nadir Shah in 1739. The other piece of the Great Table diamond is thought to have been re-cut, to yield the oval, pale pink, 60-carat, brilliant-cut stone, known as the Nur-ul-Ain.

The Nur-ul-Ain is therefore undoubtedly a 17th century stone, that originated in the famous Kollur mines, near Golconda, in Andhra Pradesh, Southern India, and as pointed out earlier, the lesser portion of the Great Table diamond, that entered Shah Jahaan's court in the mid 17th century. However, it is not known precisely when the Great Table diamond was cleaved to yield two diamonds. Was it when the stone was still in India? or, was it after it's arrival in Persia, perhaps still mounted on Shah Jahaan's Peacock Throne? It is generally believed that the Great Table diamond was already transformed into the Darya-i-Nur and the Nur-ul-Ain, when Nadir Shah plundered the jewels and other valuables of the Mogul Emperors of India, including the jewel studded Peacock Throne of Shah Jahaan, the most splendorous throne ever made in the history of mankind.

In the immediate aftermath of Nadir Shah's assassination in June 1747, by his own troops, most of his treasurers were plundered by his revolting troops, including the Darya-i-Nur and the Nur-ul- Ain. The vast empire created by Nadir Shah crumbled into several independent states, and inside Iran itself three different states emerged. One state was the Afsharid State based in Khorasan, with it's capital at Mashhad, and headed by Nadir Shah's blind grandson Shah Rukh, who ruled from 1748 to 1795. The second state was situated at Mazanderan (Tabarestan) in Northern Iran, south of the Caspian Sea and was headed by the Qajar Chief Muhammad Hassan Khan Qajar. The third state was based in Central and Southern Iran, with it's capital in Shiraz and was headed by Muhammad Karim Khan Zand of the Zand dynasty. Each of the above rulers must have laid their hands upon part of the treasurers of Nadir Shah.

Karim Khan's state was the most successful of the three states in terms of peace, popular contentment and economic prosperity. After Karim Khan's death in 1779, Agha Muhammad Khan Qajar gathered a large force in Mazanderan and embarked on a war of conquest in the South. He subdued the Zand territory after defeating Lotf Ali Khan in 1794. In 1796 Agha Muhammad Khan Qajar assumed the imperial diadem as Shahanshah (King of Kings) and later in the same year he captured Mashhad, and took Shah Rukh prisoner.

Shah Rukh was subjected to the most horrifying and painful torture and forced to surrender all the treasurers acquired after Nadir Shah's death, which finally resulted in his death. The treasurers re-assembled by Agha Muhammad Khan Qajar after defeating Lotf Ali Khan and Shah Rukh included the Darya-i-Nur, the Nur-ul-Ain, Shah diamond, Taj-i-Mah etc. However Agha Muhammad Khan Qajar did not live long to enjoy his re-assembled treasurers. The very next year in 1797 he was assassinated by his own servants, while on an expedition to Georgia.

The Iranian Crown Jewels then passed down a succession of rulers which included Fath Ali Shah (1797-1834), Muhammad Shah (1834-48), Nasser-ed-din Shah (1848-96), Mozaffar-al-Din Shah (1896-1907), and finally Muhammad Ali Shah (1907-1909). Muhammad Ali Shah in his attempt to suppress the National Consultative Assembly granted by his predecessor Mozaffar-al-Din Shah, after the Constitutional Revolution in 1906, was defeated and forced to seek refuge in the Russian legation. He carried with him the Iranian Crown Jewels, and claimed that the jewels were his personal property. However due to the untiring efforts of the revolutionaries, and representations made to the Russian government, the Iranian Crown Jewels were restored back to Iran.

Iran's experiment with democracy was short lived, lasting only about 15 years from 1906 to 1921. The collapse of democracy in Iran was mainly due to the interference of the British and the Russians who carved out spheres of influence in the country. The Russians withdrew from Iran after the Bolshevik Revolution of 1917, but the British continued to maintain an interest in Iran, until they were forced to withdraw their advisers in 1921 due to international pressure. However, in 1921, an Iranian Officer of the Persian Cossack Brigade, Reza Khan, staged a coup and took control of all the military forces of Iran. Reza Khan consolidated his position first as War Minister and later as Prime Minister under Ahmad Shah, and eventually deposed Ahmad Shah in 1925, and had himself crowned as Reza Shah Pahlavi. Thus the Shah rulers of Iran who were only nominal Heads of State after the constitutional revolution of 1906, were effectively restored as absolute monarchs in 1925.

Reza Shah Pahlavi laid the foundations of a modern state in Iran by introducing educational and judicial reforms. He also re-negotiated the oil concessions given to western countries. But, his suspicions of the British and the Russians, forced him to move closer to Nazi Germany, which resulted in the Anglo-Soviet invasion of his country in 1941, under the pretext of ensuring the safe passage of U.S. war material to the Soviet Union through Iran. The Allies forced Reza Shah to abdicate, placing his young son Mohammed Reza Shah Pahlavi on the throne. After the war the National Front consisting of nationalists, clerics, and non-communist left wing parties led by Mohammed Mosaddeq, a career politician and lawyer, was elected to power, and Mosaddeq nationalized the country's oil industry. Britain and the U.S. immediately swung into action and planned a joint coup to oust Mosaddeq. In August 1953 Shah Mohammed Reza fled the country after quarrels with the Prime Minister Mosaddeq came to a head. Almost simultaneously the C.I.A. plotted coup succeeded, and Mousaddeq's Government was ousted. Within a week Shah Mohammed Reza returned to Iran and appointed a new Prime Minister. Shah Mohammed Reza then moved immediately to consolidate his position as the absolute monarch of Iran.

In 1958, when Shah Mohammed Reza married Empress Farah Diba, a special tiara was designed by Harry Winston for the occasion. The centerpiece of this tiara was the Nur-ul-Ain diamond, one of the largest pink diamonds in the world. The diamond is set in platinum, and is surrounded by other diamonds in shades of pink, yellow and colorless, with a row of colored baguette diamonds lining the base of the Tiara. The Nur-ul-Ain weighed around 60 carats, and the other diamonds weighed between 14 to 19 carats each. The tiara contains a total of 324 diamonds.

The diamond became part of the Iranian Crown Jewels in 1739 and remains so up to this day. It is one of the most celebrated diamonds in the collection. Empress Farah Diba's tiara is still preserved in it's original setting, with the Nur-ul Ain as the centerpiece.